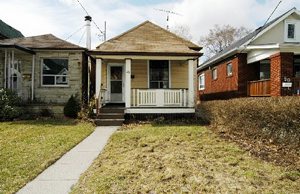 In a neighbourhood where house sizes vary considerably — from semi-detached to monster infills — this one-bedroom bungalow may have benefited from being one of the smallest on the street, according to agent Julie Kinnear. If it had been among just bungalows, its smallness might have worked against it. As it was, the larger homes around it may have enhanced its value, she says.

The 800-square-foot home sold quickly, given its price and location in Bloor West Village near schools, shops, parks, recreational facilities and public transit. "It had a lot of charm and a lot of character, but it was definitely a house for one person," Ms. Kinnear says.

While the roof and chimney have been repaired, and the bathrooms renovated, some of the original flavour of the century-old house has been maintained. The exterior features aluminum siding, and inside, there are hardwood floors and nine-foot ceilings.

The living room has a plate rail, traditional fireplace mantle and double doors to the bedroom, which overlooks the street.

The eat-in kitchen features retro-style cabinets, a corner wall unit and halogen lights. Down the hall from the kitchen is a powder room, and a mudroom in the rear leads to the patio and garage next to the landscaped garden.

Like many bungalows, Ms. Kinnear says, there is a lot of extra space in the open basement, which is broadloomed and has a four-piece bathroom with a claw-foot tub. "There was a lot of potential for a home office or guest room."