It's true: the lazy, hazy summer months are already over and autumn is upon us. Time for wood-burning fireplaces, warm cups of cocoa, and a good ghost story or two! In our second part of haunted locations in Toronto, we bring you tales of a gloomy, yet inviting, city park, a trendy downtown district that's hopping with humans of both the living and undead variety, and a couple of eerie educational institutions that have a lot of history behind them. 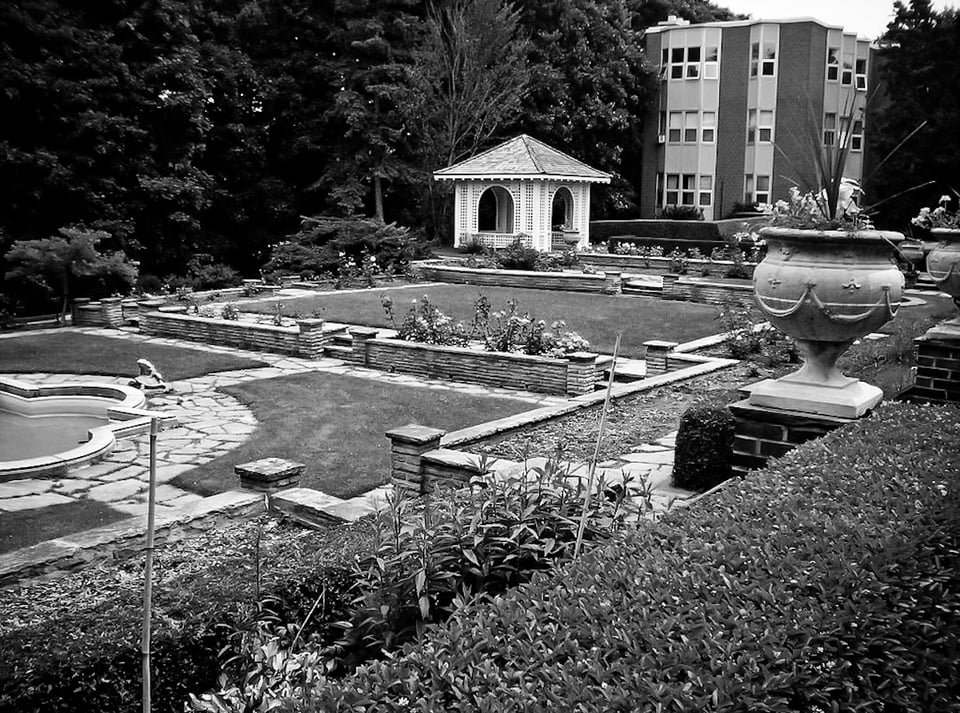 Glendon College is affiliated with Toronto's York University, the third largest university in the country. Glendon is classified as a bilingual liberal arts college with a student population just shy of three thousand. It is located on the former estate of Edward Rogers Wood who was a very prominent Toronto financier in the early nineteen hundreds.

The Glendon College campus is home to several ghosts that have been recognized by the Toronto Ghosts and Hauntings Research Society and they are said to haunt both the manor house and the grounds it sits upon. A little girl has been periodically spotted playing near the campus' willow tree. She is believed to have lost her young life either by falling down stairs or from falling from the tree itself whilst climbing it. A small boy, a fitting ghostly companion for our little girl, has also been spotted playing by the campus fountain. 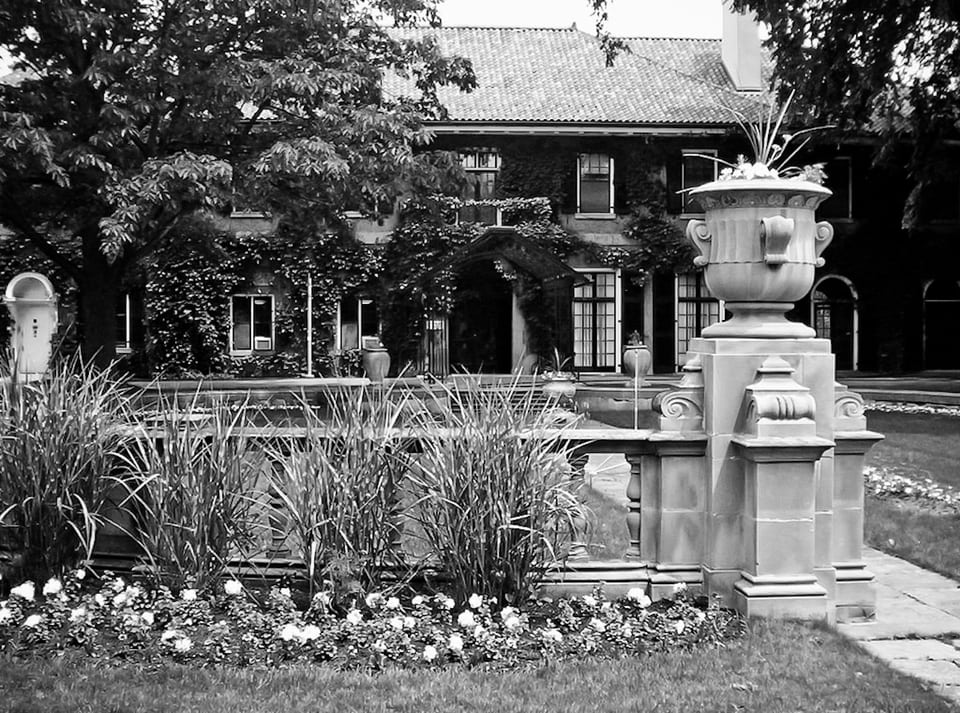 The manor's second floor is haunted by a former Head of House who presumably does not want to relinquish his position as leader. An angry, malicious spirit haunts a gazebo that lies closest to the campus ravine. It has been suggested that he or she must have died in or near the water. Passersby report feeling as if they are being pushed whilst strolling through that particular area. Lastly, a young woman who had committed suicide on campus is said to haunt the college's library, appearing in photos taken on the campus grounds. She makes herself visible staring out of both the first floor and basement windows. Sabrina, a former student of York University, confides:

I spent one year on the Glendon College campus and I'd literally hear new ghost stories almost every day. Out of all the stories that were floating around campus, the one about the ghost near the ravine was the most common. Apparently, a lot of people walking past that spot have felt like they were being pushed. It's never happened to me personally, but I definitely got the feeling, more than once, that I was being watched whilst walking around the manor house. It's a beautiful but very eerie building. 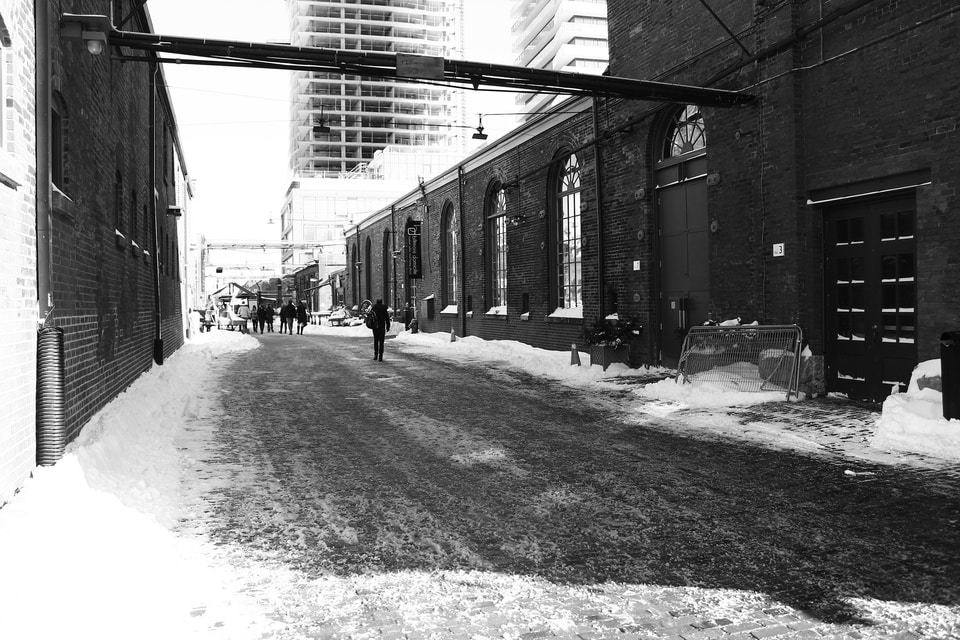 This fledgeling business was once considered the largest Canadian distiller of alcoholic beverages during its heyday. The former manufacturing facilities are currently known simply as the Distillery District which has become a popular hotspot along the Toronto waterfront. Steve, a marketing director in his mid-thirties, says:

I've been to a few weddings at the Distillery District before and there is definitely an air of spookiness about the place!

James Worts and his brother-in-law William Gooderham founded Gooderham & Worts Distillery back in 1832. Two years later, in 1834, Worts' pregnant wife Elizabeth died in childbirth, leaving Worts absolutely devastated. He was so distraught over the premature death of his wife that he is believed to have committed suicide by leaping into his distillery's well, located within the windmill, and thus drowning. His ghost haunts the site to this day. 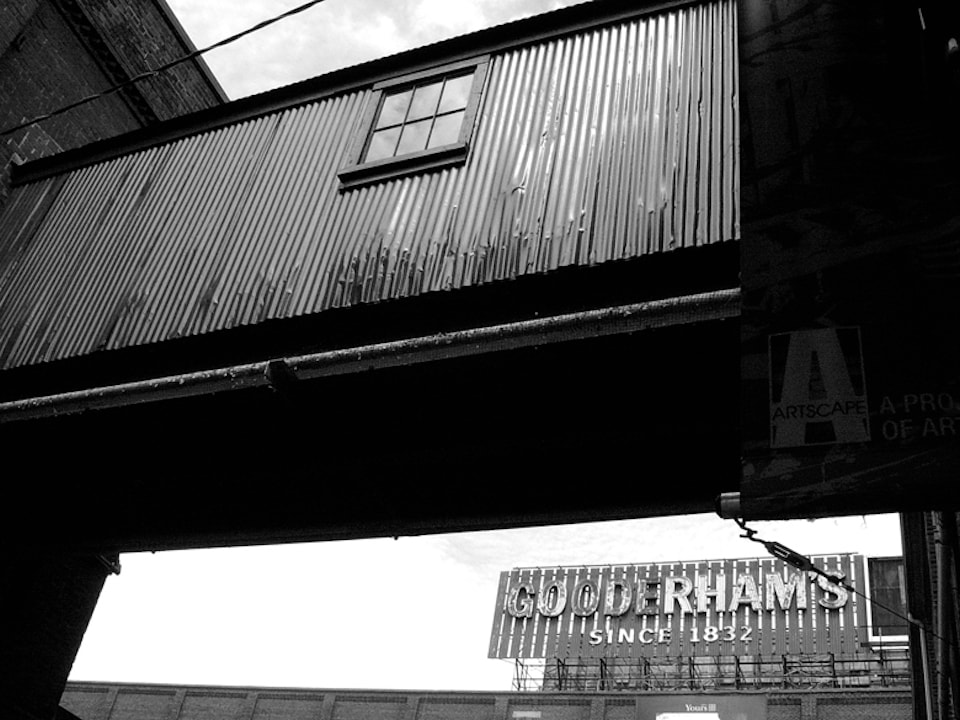 Worts' eldest son, James Gooderham Worts, replaced his father at the company's helm and went on to successfully managing the distillery with original founding partner William Gooderham. The business prospered and became the most prominent distillery in the city. The Gooderham & Worts Distillery eventually closed in 1990 and was converted into the present day's Distillery District. There have been numerous reports of doors opening and closing on their own, the sounds of banging coming from the buildings, flickering lights, and floating objects which are apparently very common according to both staff and visitors. 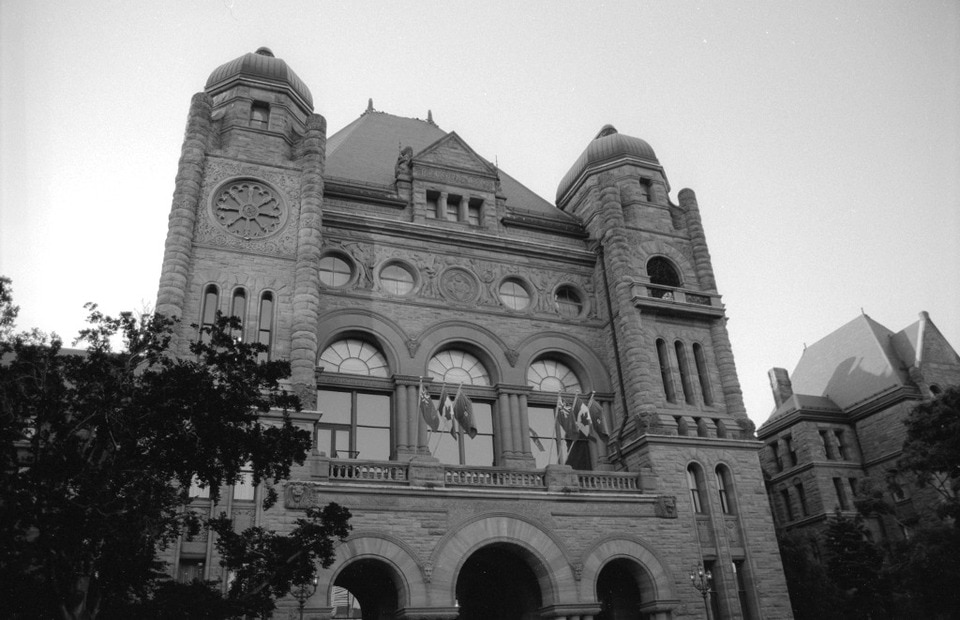 This is a vast, urban park located in bustling downtown Toronto. The park was named in honour of Queen Victoria and was officially opened in 1860 by Edward, Prince of Wales. Queen's Park is commonly associated with the heady provincial political scene since it is the site of the Ontario Legislative Building which, in turn, houses the Legislative Assembly of Ontario.

Queen's Park is oval-shaped and contains numerous winding footpaths that scour the site from north to south and east to west. In the spring and summer months, there is heavy tree cover that provides pockets of cool shade for those city-dwellers enjoying picnics and afternoon naps on its grounds. The northern section of the park has been designated as the Province of Ontario's "saluting station" meaning that all gun salutes are performed here to mark special occasions such as the Victoria Day holiday each May. 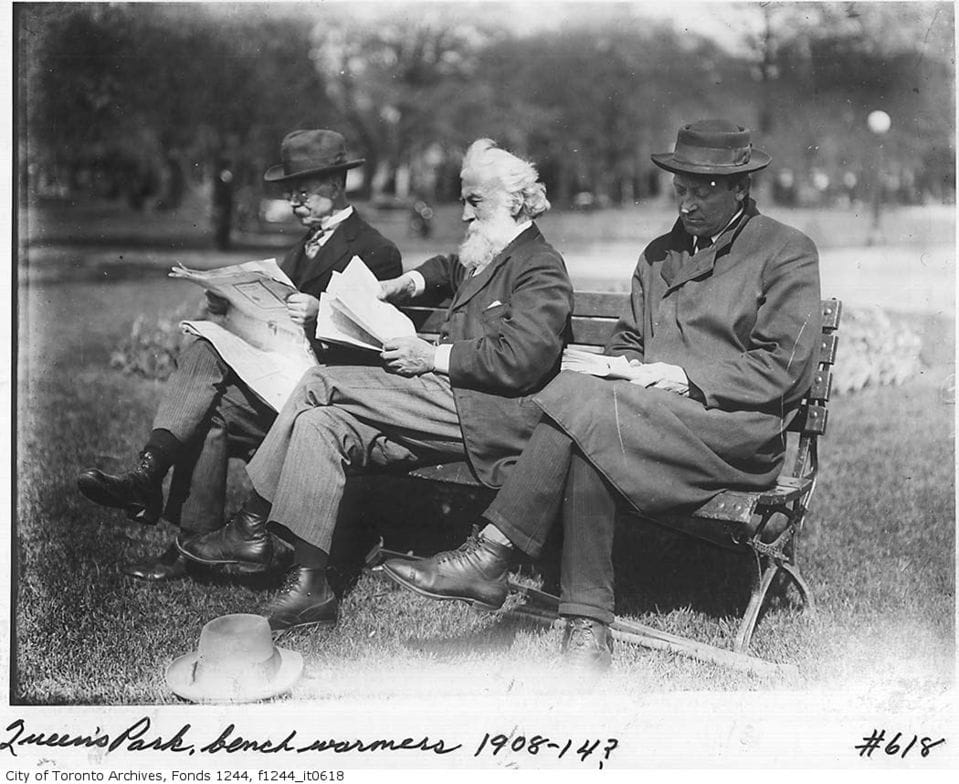 Three men on a bench by Toronto History

According to Dan Bogart, communications officer with the Legislative Assembly's parliamentary protocol office, there are approximately half a dozen spirits that currently haunt the Legislature Building at Queen's Park. Among these restless spirits is believed to be World War I hero Charles Rutherford who was awarded the Victoria Cross and died in June 1989. A mysterious woman in white is also said to haunt the park's Legislative Building and many people have claimed to have heard her moaning and/or crying on the building's third floor. The grand staircase has seen a flurry of ghostly activity in the past, often in the form of floating spirits that seem to hover above the steps. Paranormal investigators seem to think that the majority of these ghostly beings were, at one time, patients of the lunatic asylum that stood on this site prior to the building of the Legislature. 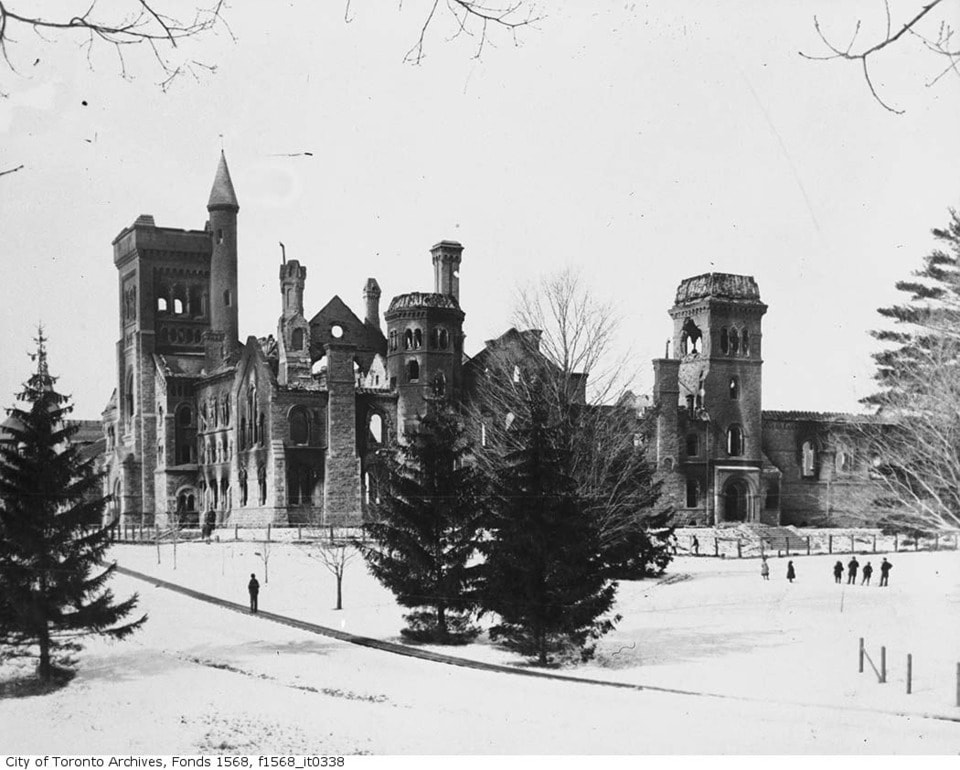 Originally founded in 1827 by royal charter as "King's College," the university was known as Upper Canada's very first institution of higher learning. In 1850, once King's College broke from the Church of England, the university became a secular institution and adopted its current name of the University of Toronto (UofT). UofT consists of twelve colleges that differ in both character and history and each prospective student, if accepted to study at the university, will be placed in his or her desired college.

John Strachan, the founder of Trinity College, has appeared to students who stay out late on Halloween. He was the first Anglican Bishop of Toronto and died in November 1867. His disapproving face perhaps wants to frighten students back into their warm beds instead of having them cause mischief on the grounds of the university's campus. St. George's campus is no stranger to paranormal activity either; numerous strange occurrences have been reported along with a slew of mysterious deaths. This overflow of ghostly happenings has inspired English professor Marlene Goldman to publish her own book entitled The Politics and Poetics of Hauntings in Canadian Fiction. Goldman believes that:

we just love to be frightened - we're happy to think that there is a mysterious aspect to human experience in the world. 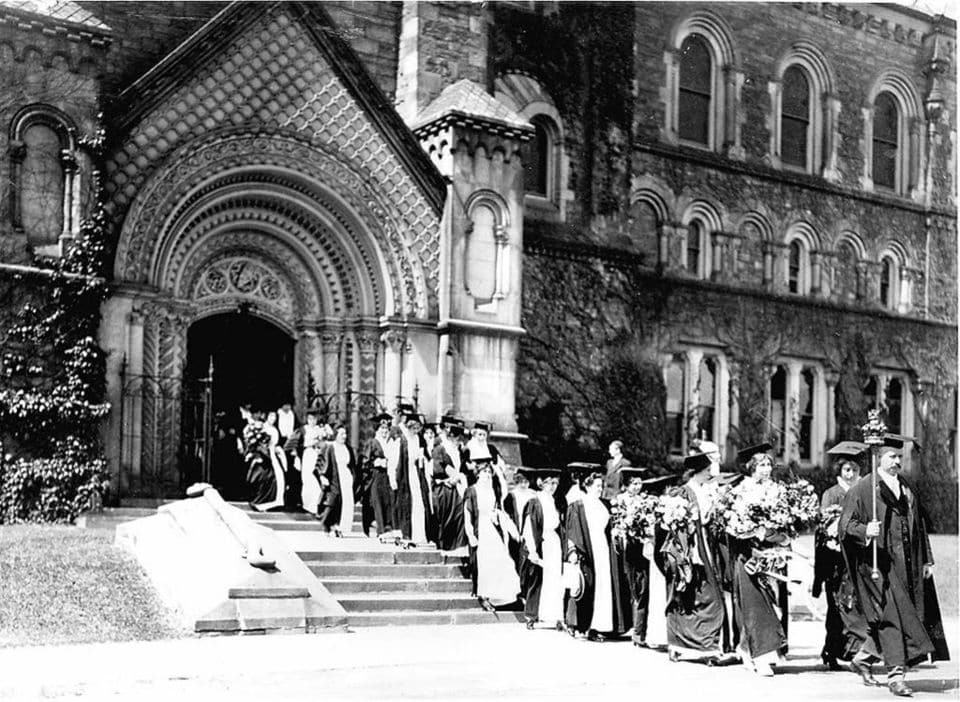 Women graduates University of Toronto, circa 1915

A face carved out of stone that is located at University of Toronto's Hart House is believed to have leaked water out of its eyes a few years ago. The legend of the university's murdered stone mason keeps students and staff on edge and there have been multiple sightings of a dirty figure clothed in a billowing black coat that is widely believed to be the labourer. Perhaps he is looking to avenge his death still to this day, destined to wander the campus grounds on a mission he will never see the resolution of.

Now is the perfect time of year to get out and explore Toronto's allegedly haunted buildings, homes, and public spaces. The crisp, cool air of autumn has invaded the city's streets and Halloween is beckoning! Why not sign up for a ghost walk or a most-haunted tour? Toronto is chock-full of great tour companies that specialize in these types of events, like The Haunted Walk which runs tours in Toronto, Ottawa, and Kingston and is widely considered to be Canada's most popular walking tour company. Check out their website and make your reservation today!