Separated from Old Toronto by the Don River, Old East York is just southeast of the waterway while neighbourhoods such as Leaside and Thorncliffe are northwest of the river. Whilst Toronto is often called the city of neighbourhoods, this is especially true in the former East York borough where south of river too there are many neighbourhoods including Broadview North, Todmorden Village, Parkview Hills, Olde East York, Pape Village, Woodbine-Lumsden, Topham Park, and Crescent Town. 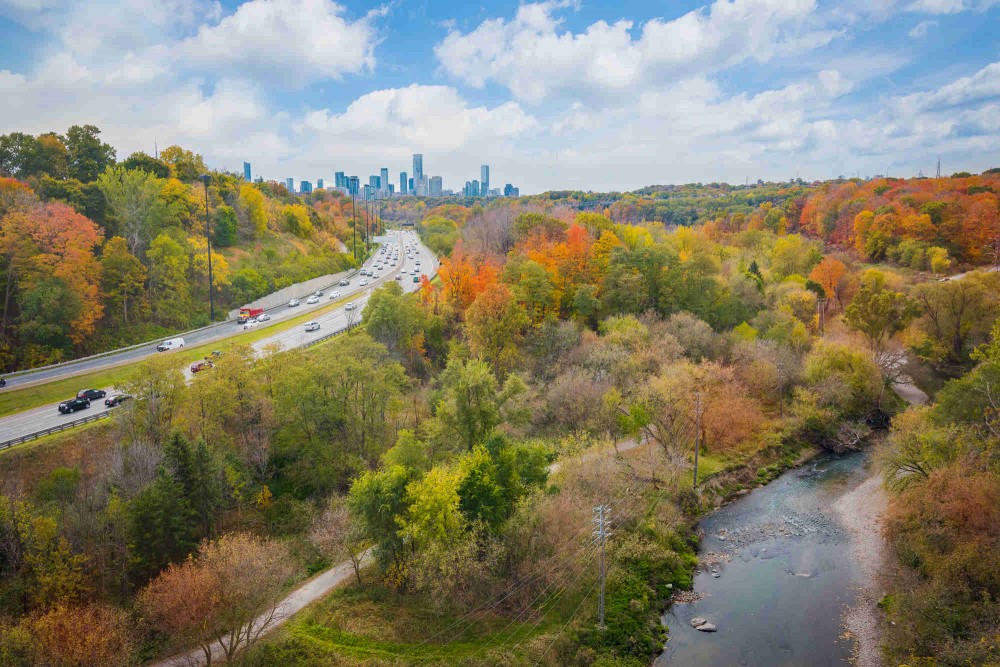 On January 1, 1924 East York became a township with a population of 19,849. After World War II, it was home to many veterans and subsequent baby boomers. However, the borough did not allow the serving of alcohol in restaurants, this drove the flow of liquor to the nearby Danforth. 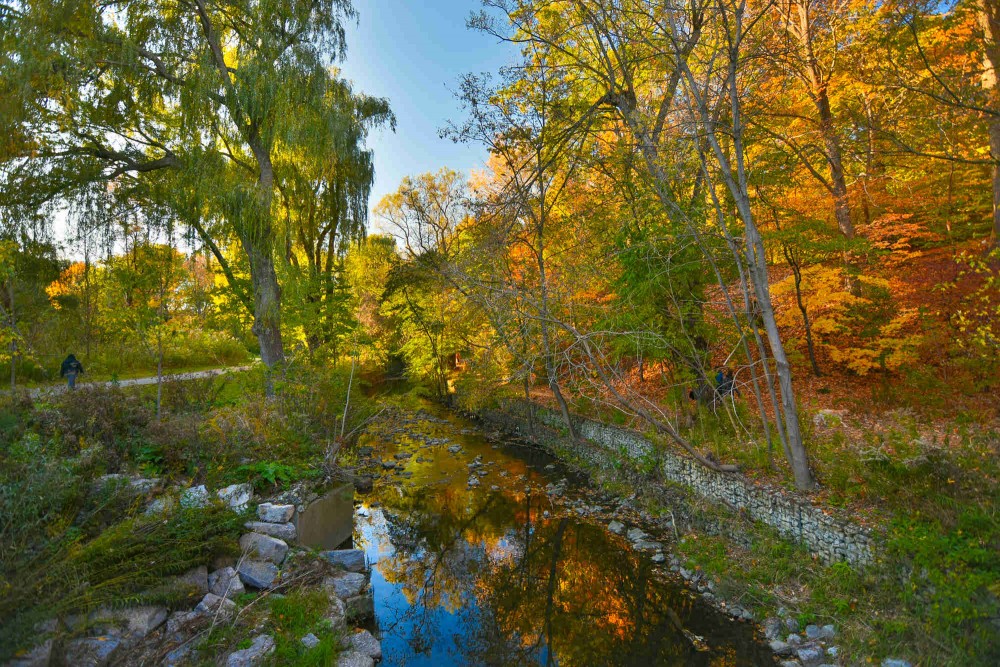 East York would later gain status as a borough in 1967 when it amalgamated with the township of Leaside only to be repackaged as part of the new mega-Toronto in 1998, along with North York, Scarborough, York, Etobicoke and Old Toronto. 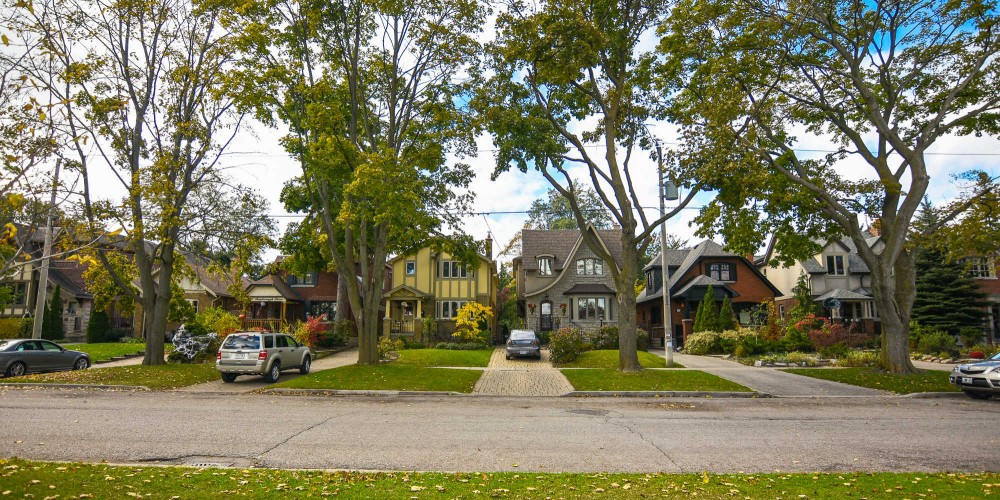 Baby boomers and veterans shaped East York into a senior citizen-centric community, although today nearly half of the population is made up of immigrants and younger families. As of 2011, the total residency is approximately 115,000. By way of population size and multiculturalism, sending a child to one of East York’s school should give them a good social understanding of other cultures. 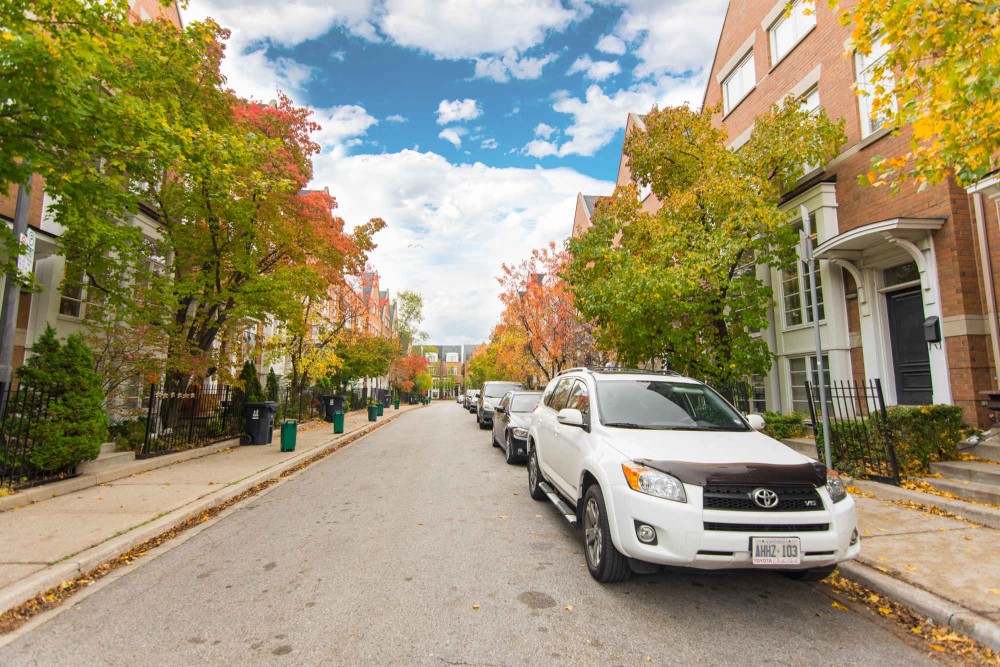 East York is blessed with astoundingly abundant greenery by the Don River, meaning there is plenty of park-space that remains preserved for a great afternoon with friends or family. This provides a quiet, relaxed escape from the busy city life that surrounds the region in all directions. 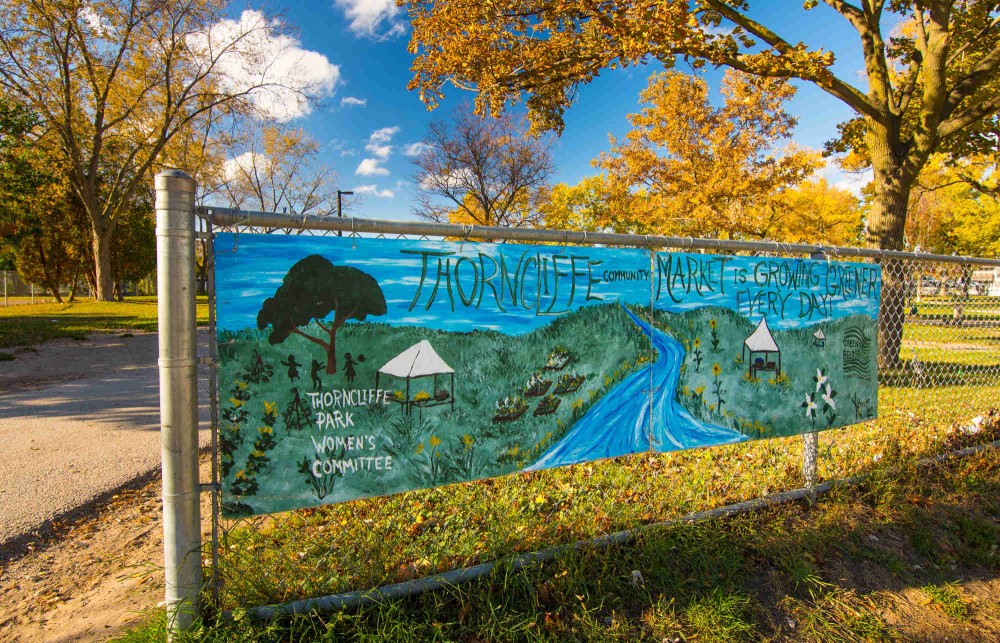 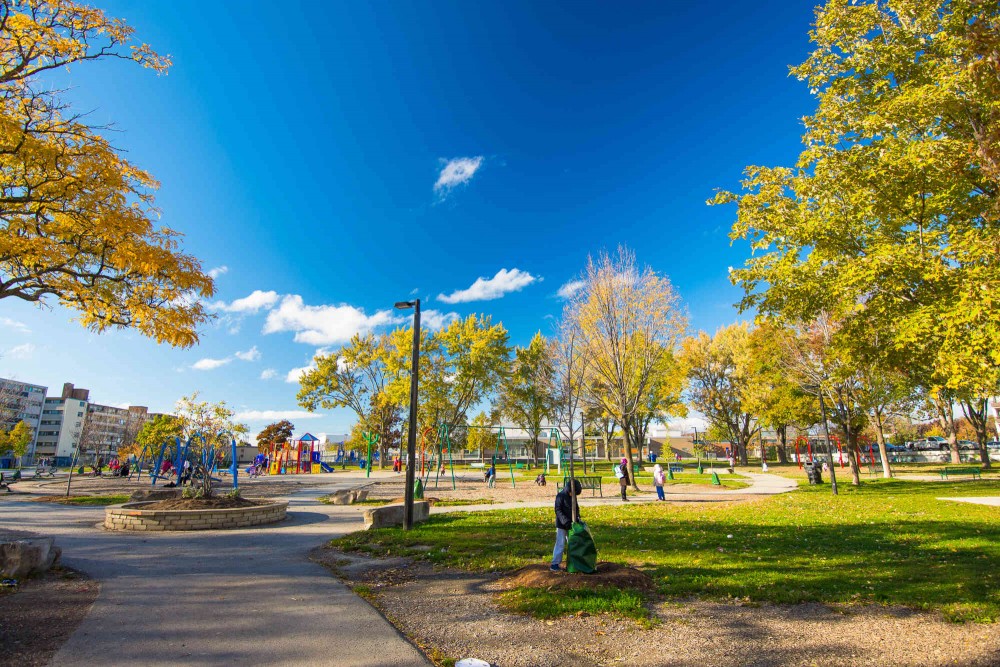 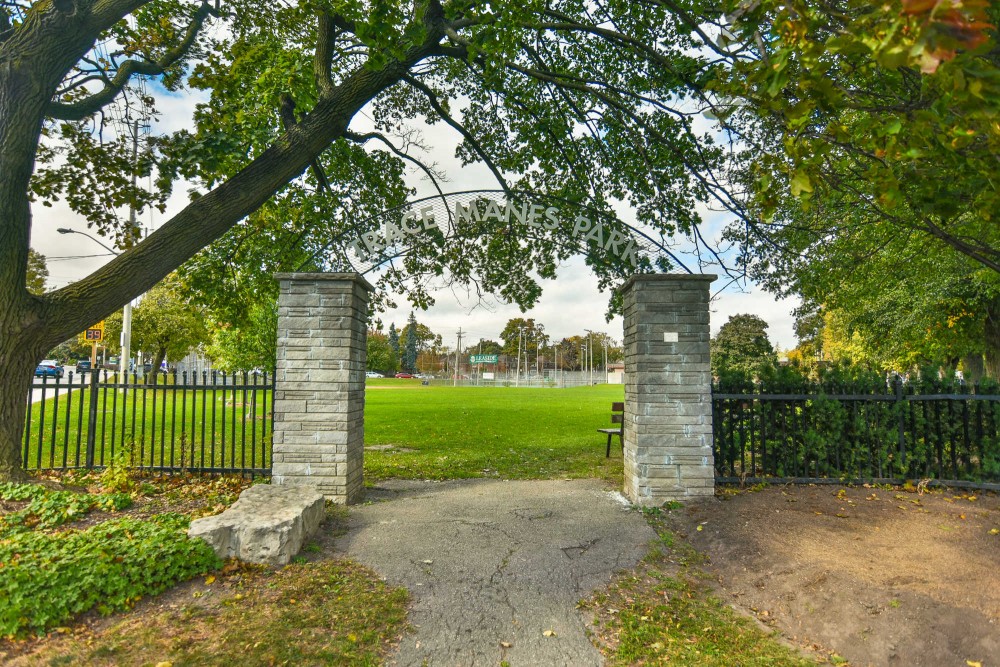 Community involvement in East York parks is particularly high with residents being very involved in successful soccer and baseball teams both north and south of the valley, as well as the dedicated Team EY-led building of a public outdoor skatepark which attracts skateboarders of all ages and skills. East York skateboarders have been a driving force in the community engagement of families and children in the borough. 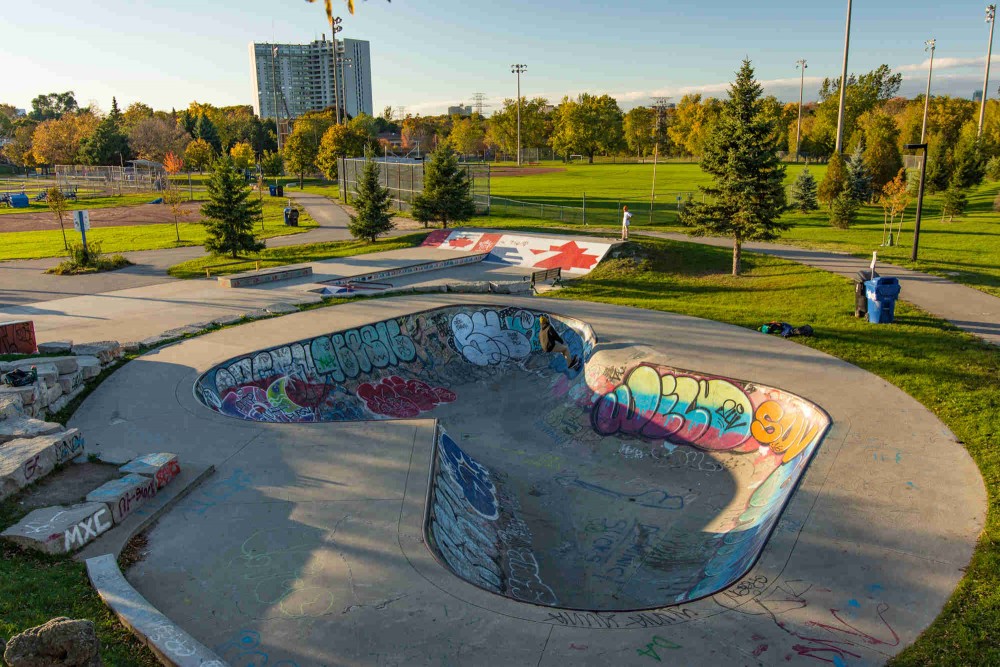 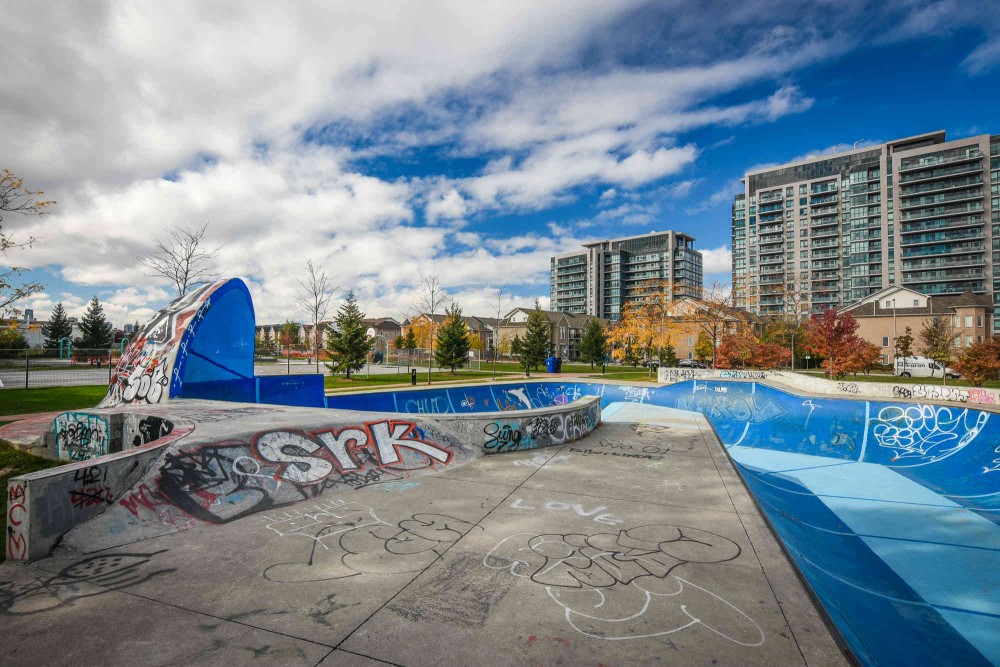 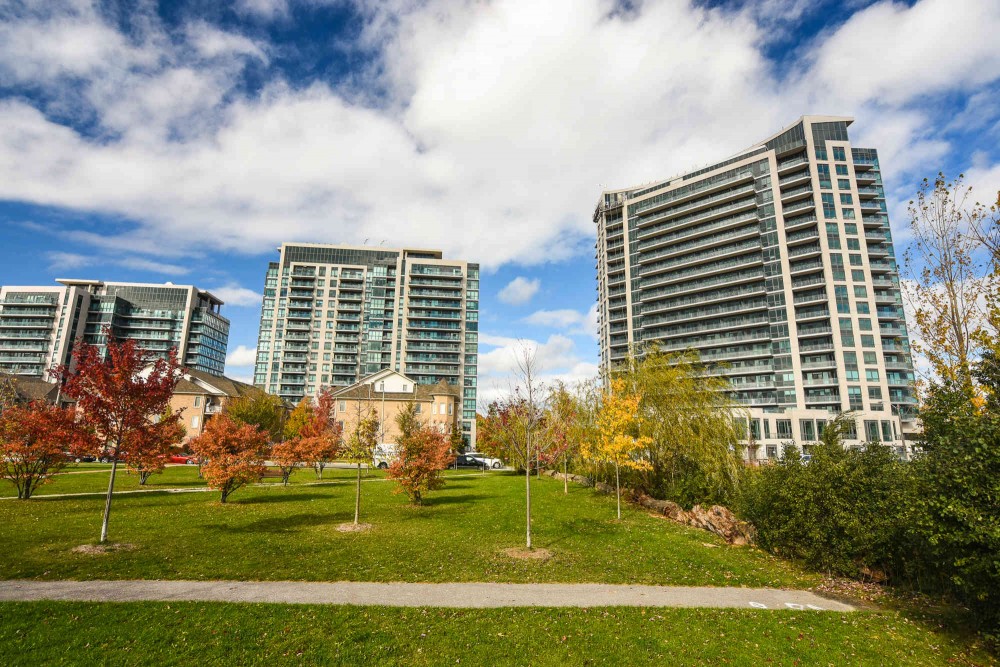 When looking for tasty treats there are several pockets of restaurants to choose from.

On the north side of the river, everything from Indian and Chinese to Turkish food can be found along Overlea Blvd. Of particular note in the neighbourhood are the unpretentious yet superbly-flavoured Middle Eastern restaurants such as Afghan Cuisine and Bamiyan Kabob which will satisfy any kabob cravings you may have. 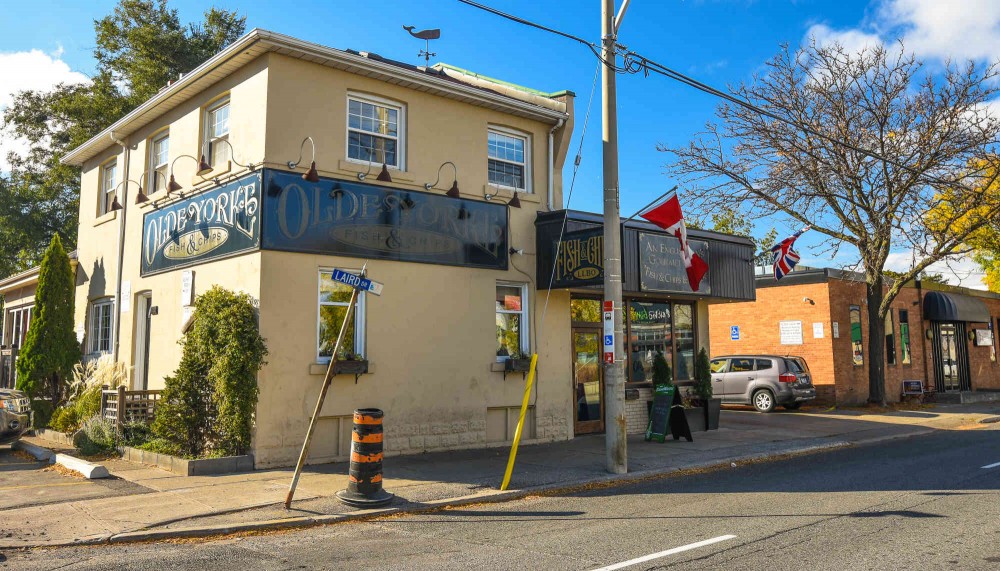 In Leaside, ask about where to have a tasty night out and you'll be directed to the cozy Olde Yorke Fish & Chips on Laird Dr., arguably Toronto's best fish & chips. You can enjoy an authentic British-style pub complete with mushy peas and sherry trifle. And they offer a take-away service if you'd rather eat at home.

At Eglinton Ave, you can find North Shore Pie Co. (formerly Wiseys), the tastiest New Zealand meat pies in Toronto. But the real secret in Leaside is Adamson Barbeque, tucked away in the industrial park and only open at lunch hours where it serves huge lines of people authentic and smokey Texan BBQ meats. 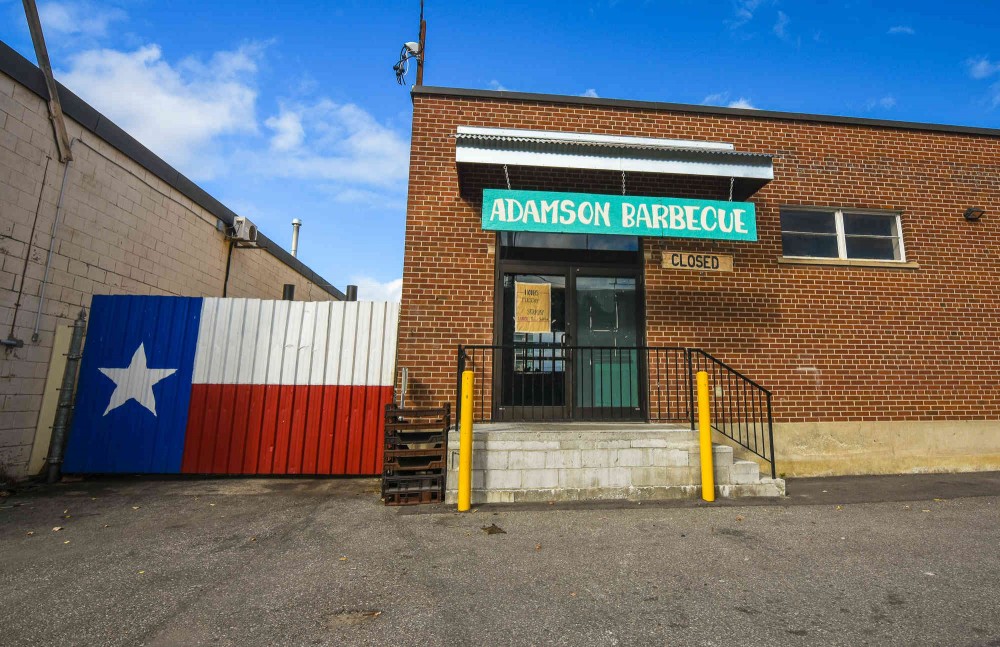 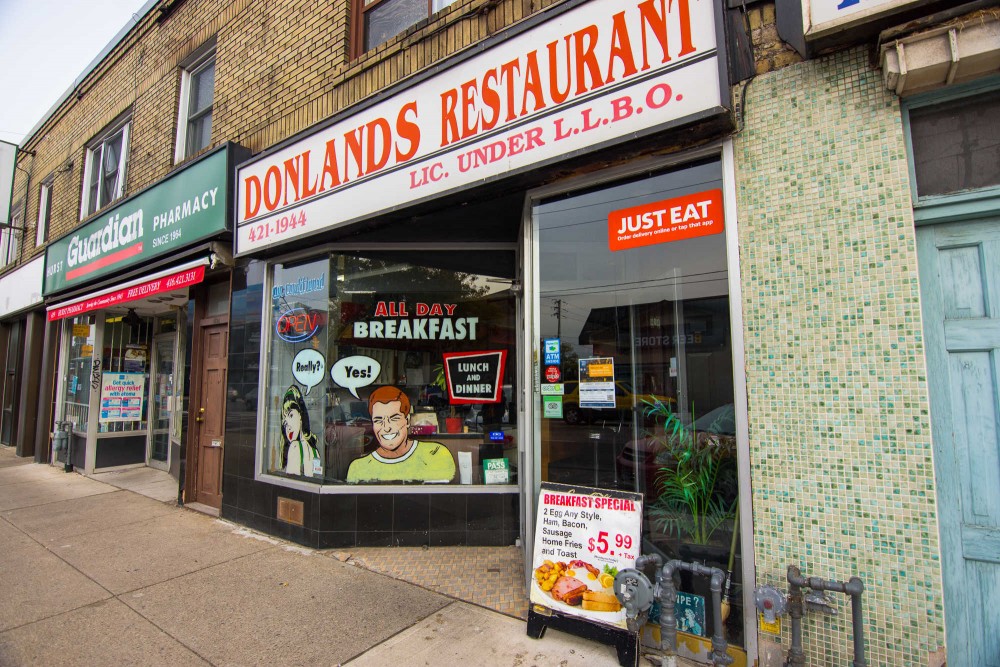 Donlands has a series of petite, locally-owned restaurants that can range from fish & chips to organic cafes to Filipino cuisine, as well as speciality grocers such as Fresh From The Farm which focuses on Ontario Amish & Mennonite-grown organic, non-GMO food of all kinds. The smaller storefronts are likely to mean a lesser impact on your wallet, however what they lack in size is made up for by enthusiastic ownership wanting return customers to the neighbourhood. 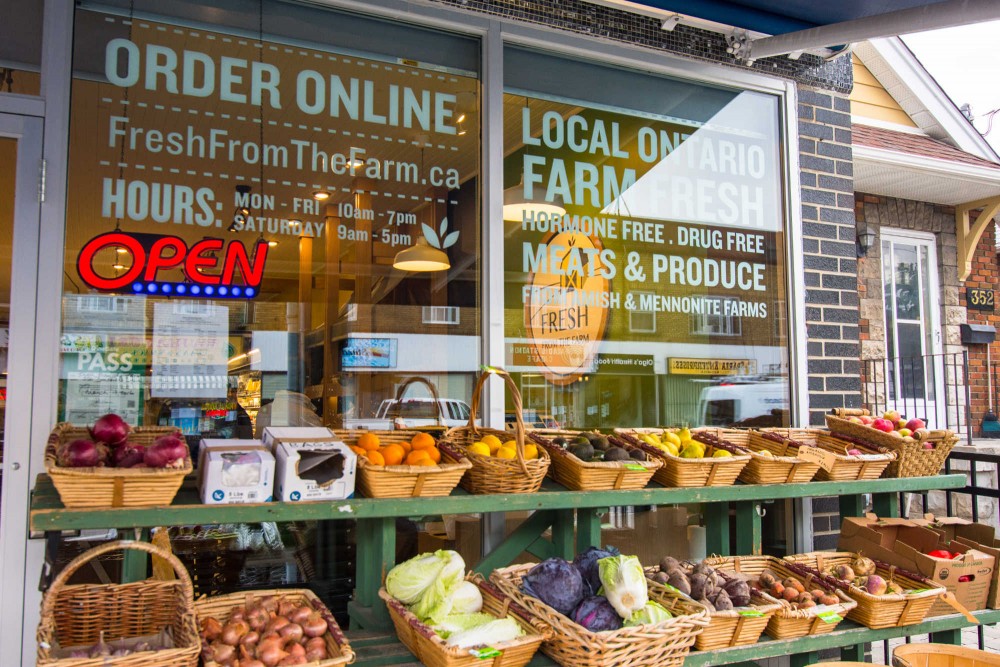 Fresh from the Farm

Pape Village consists of a large stretch of Pape Ave restaurants featuring everything from the unique Goat Coffee Co. to local Greek diners to American-style smoke houses. The longstanding family-owned California Pub & Grill has been serving customers for as long as anyone can remember, as have many other restaurants in the area. 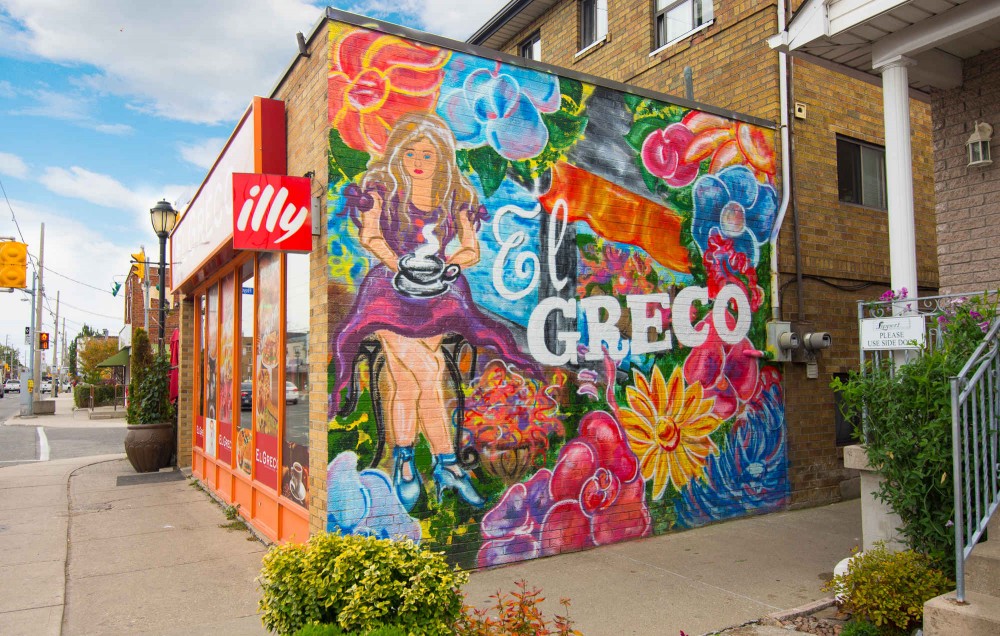 The gem of the Pape Village foodscene has to be one of the best kept secrets in Toronto although widely known to all in East York: Hansen's Danish Pastry Shop which has been around for over 50 years. Full of fresh cakes, breads, and pastries from European recipes, the trick is to visit this shop especially around Christmas to fill up on some of the most delicious shortbread and buttery cookies you'll find this side of the Don River. For something special, try the wienerbrød! 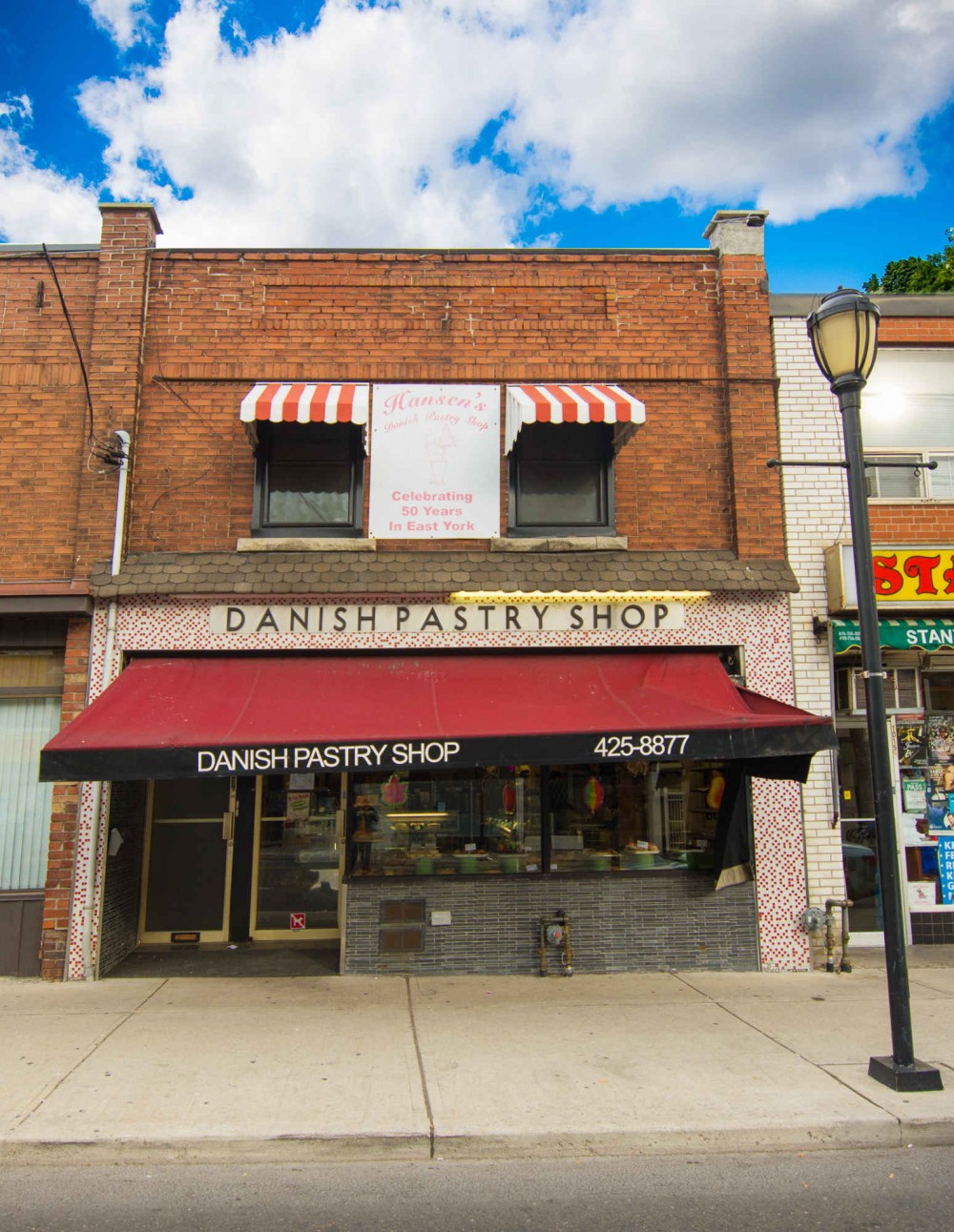 Between Plains Rd. and O’Connor Dr. on Coxwell there are several popular spots:

Knuckle Sandwich for locally-sourced meat and Instagram-worthy fries and of course Lickadee Split Ice Cream, which, as its name suggests is a great place to bring the kids or friends who have a sweet-tooth. 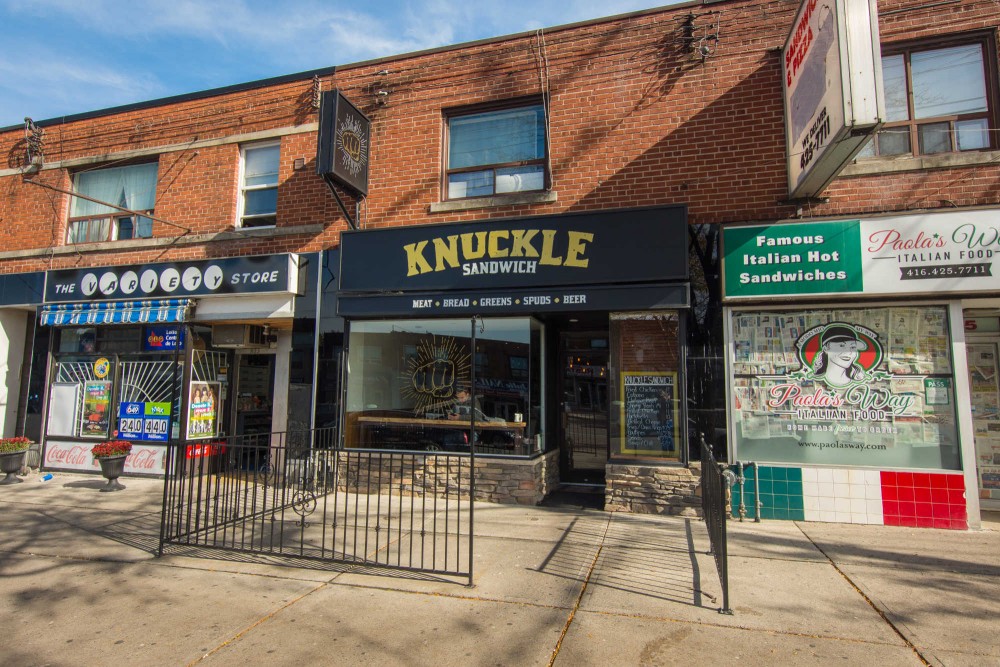 Lickadee Split has a very high customer satisfaction rating as well at 4.8/5. 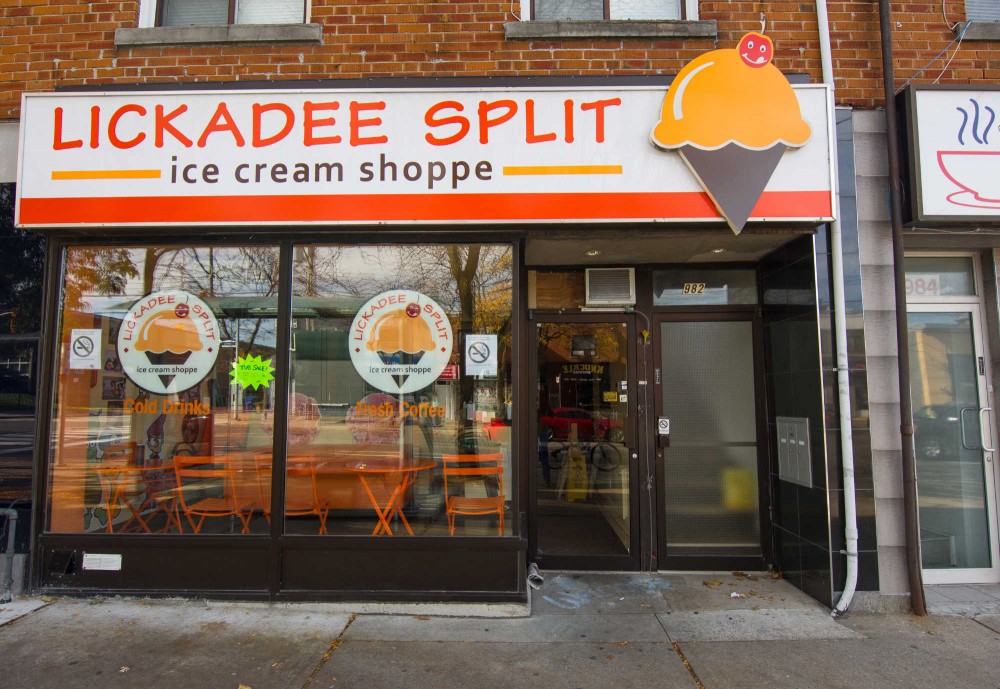 If sundaes aren't your thing, Mon K's Japanese-French fusion pastries and sandwiches are a welcome alternative for the cafe-inclined. You'll be able to pick out the best places at lunchtime when all the students from local schools head out to grab a bite to eat.

In the oft-forgotten northeast corner of East York is Henry's Chicken on St. Clair Ave East, between O'Connor and Victoria Park. Peruvian cuisine is hard to come by in Toronto but Henry's is one authentic, hidden gem that has to be tasted. No trip would be complete without a stop in the Peek Freans Cookie Outlet, a must-do that almost all East Yorkers will say you have to visit if you're in the area. 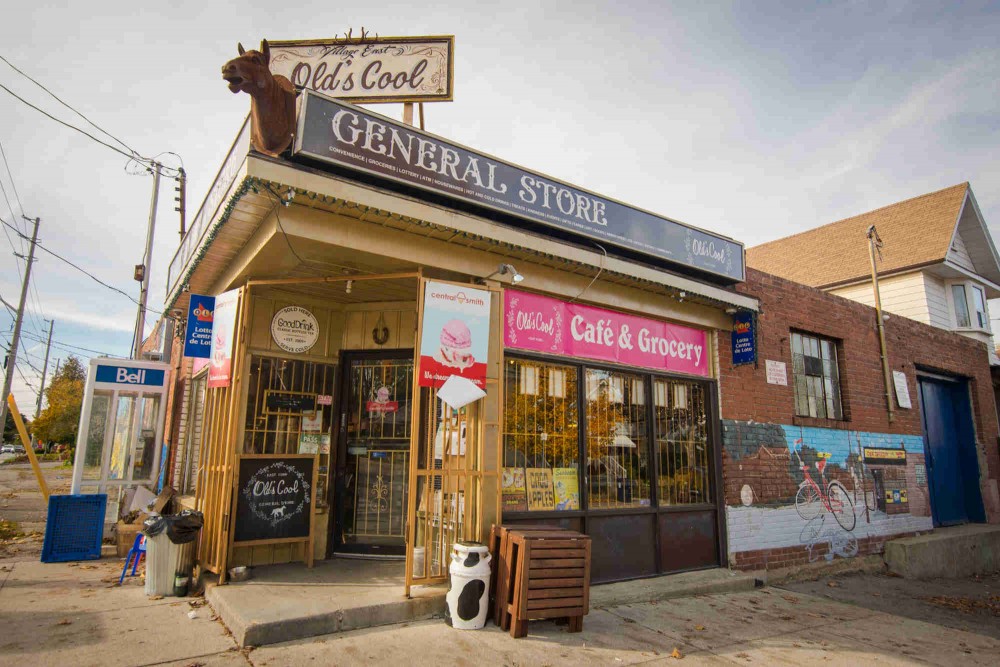 It’s not prohibited anymore! If your whistle is in need of being wet, the pub scene is alive and well in East York. Faley Restaurant has great reviews and according to some, servers memorize the favourites of frequent guests.

A staple for the Pape Village and Donlands crowds is The Wally at O'Connor and Donlands. It's a local spot serving up the typical pub fare in a clean and fun atmosphere. Despite its busy location, it's rarely rowdy and always feels laid-back with the addition of 90's video games. Perfect for an evening drink. 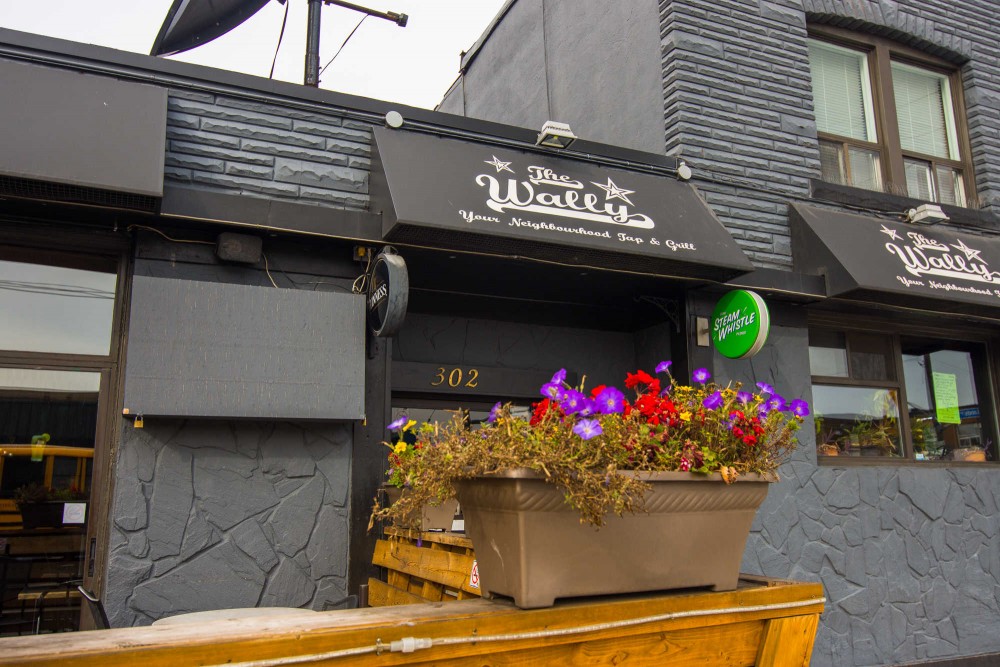 Another local favourite is Sophie’s Sports Bar. Described as being in "the middle of nowhere", the reviews are unanimous; the owners/operators are super friendly and the food is really good. Can’t ask for much more than that! Check it out at 466 Cosburn Ave if you’re looking for sports, great food and well-priced beer. There’s even a bus stop right out in front! 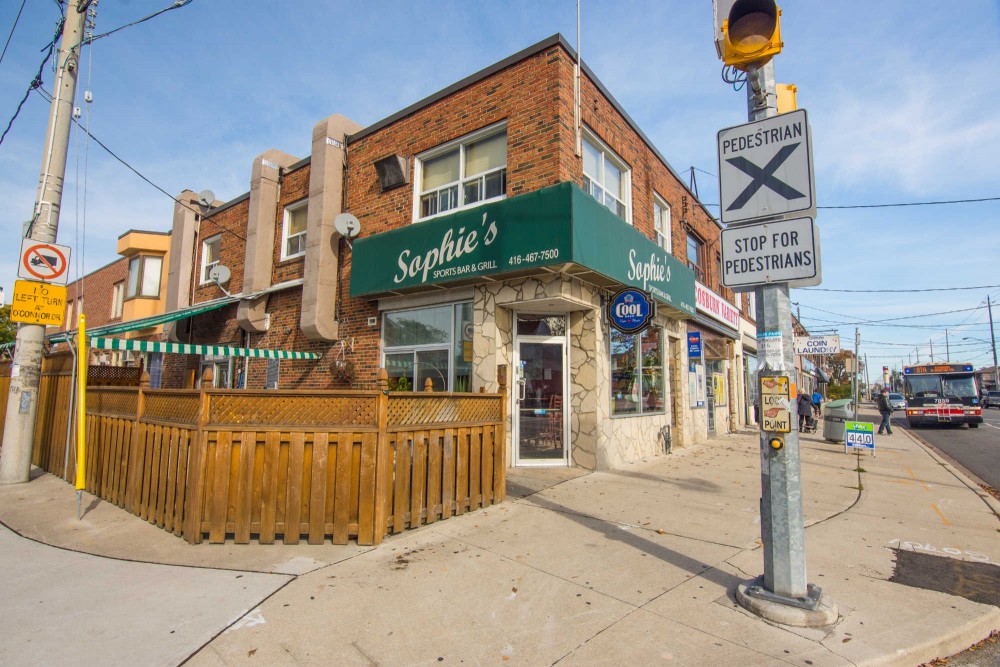 Heading north, you'll have no problem finding a watering hole along Laird Drive. New shopping developments have brought in all sorts of eateries, many aiming for quality food and drinks in modern settings for the trendy 20 and 30-somethings of the neighbourhood, such as Local. 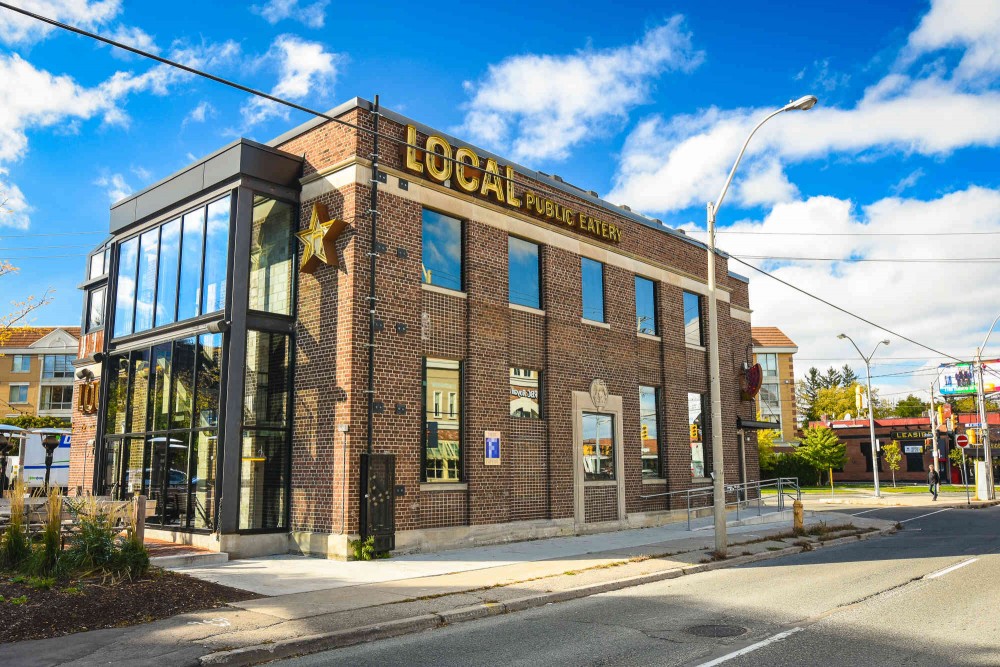 Almost an institution in Leaside is The Leaside Pub (formerly The Fox & The Fiddle) at the corner of McRae and Laird which is the home of various neighbourhood rugby and sports teams and will always be populated with Leaside locals of all legal ages having a brew or two. 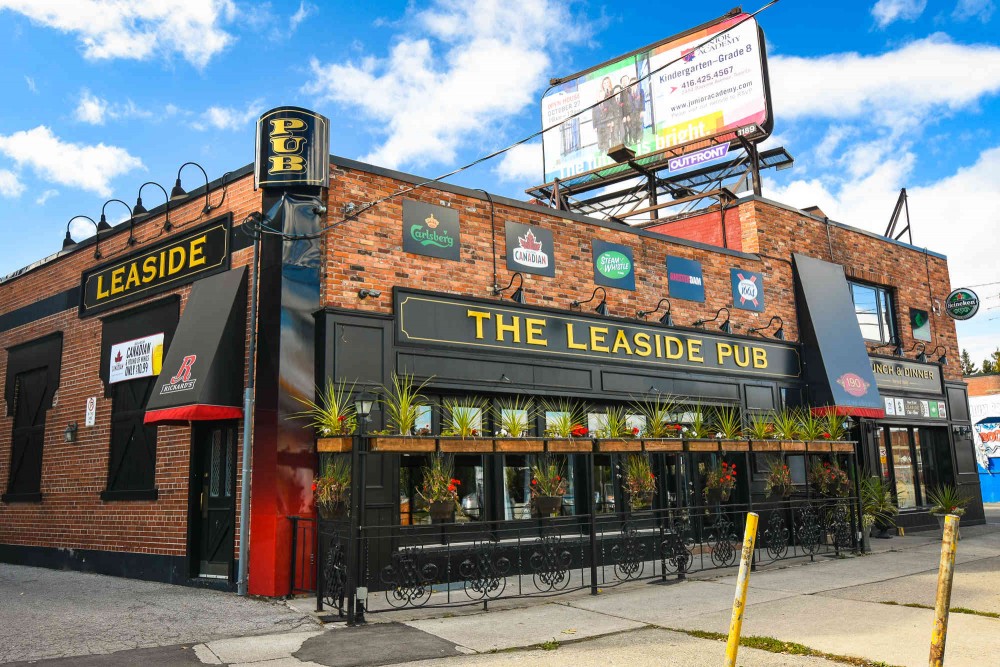 If you find yourself in Parkview, the Black Bear Pub is a small, friendly neighbourhood bar with cheap drinks and plenty of TVs with the bonus of tasty food on order. 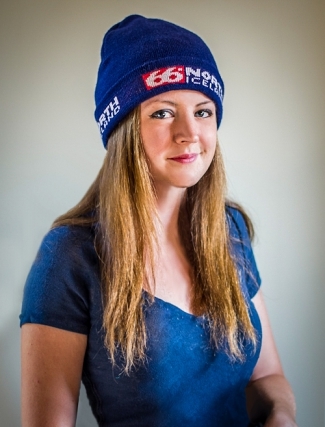 Vivian is a photographer, surfer, travel junkie, and fungi enthusiast living in Toronto and capturing life in all its many forms. After living abroad and graduating in Ecology & Evolutionary Biology from the University of Toronto, she decided to combine her love of the natural world and appreciation of culture with her life-long passion for photography. On her days off you can find Vivian hiking with her dogs, and during the night, she's shooting live music in dark clubs. Find out more at vivianlynch.com