Big white film trailers lining the sides of the roads, camera crews getting ready, maybe a faux store front and props set up on the street â this describes a common scene for any Torontonian who spends time in the downtown core. If you've ever wondered why this scenario is such a frequent sighting, you're likely to love everything you learn while reading World Film Locations: Toronto. Written and edited by Tom Ue with contributions by over a dozen other writers, the book is part of the World Film locations series, which aims to reveal the important role of cities in cinema. 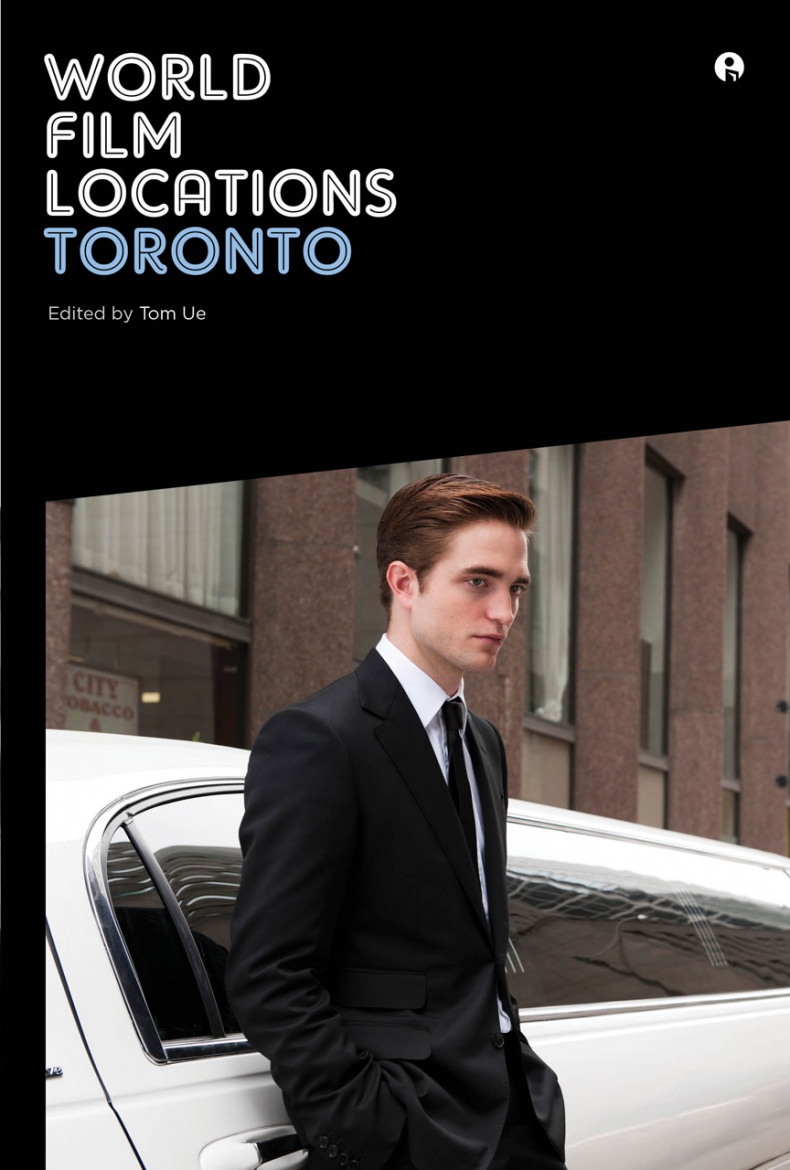 The book takes a look at dozens of individual locations around Toronto that have been used in specific films. Each film-location pair gets its own two-page spread along with a point on a map to give you a clear idea of where it is. Then, each location and the film featured have a quick half-page essay discussing what happens in the plot of the movie, how the location is featured, and the role the location plays in the progression and meaning of the film. This information is beautifully accented by colour photographs of the featured location on its own as well as several frames from the movie that clearly demonstrate the use of the location. This creates a very visual reading experience and makes it easier to understand what is being described.

Toronto has been home to so many films that it is impossible to feature and discuss each of them at length. Fortunately, interspersed with the book's featured locations are brief discussions of different areas (like the Distillery District) and themes (like coming-of-age stories) that are relevant to Toronto's role in film. These discussions touch on many films, from blockbuster hits to Canadian indies, that have called Toronto home for a time. This makes World Film Locations: Toronto a great way to learn a little bit about a wide variety of movies. But if you find yourself deeply interested in a movie, you'll need to do a bit more research, as the breadth of material covered by the book means it is only able to skim the surface of each film. 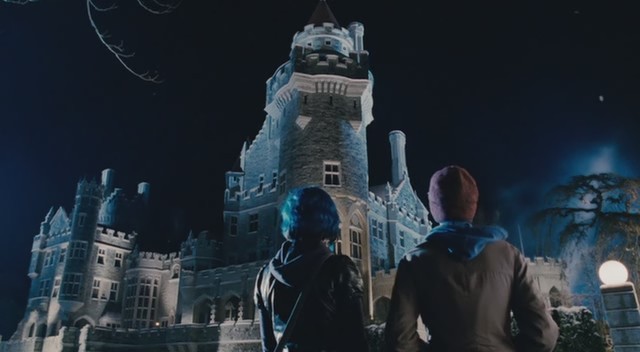 Casa Loma in Scott Pilgrim vs. The World

A movie like Scott Pilgrim vs. the World is pretty well known for being filmed entirely in Toronto â after all, the film does start with the line, "Not so long ago... In the mysterious land... Of Toronto, Canada." So it isn't surprising to find it featured in the book. But there are other films showcasing important Toronto locales you might never have noticed unless it was brought to your attention. For instance, did you notice the Toronto Reference Library standing in as the NYC library in RED, the Elgin and Winter Garden Theatre Centre in the final big dance number in Chicago, or Roy Thomson Hall's distinct intersecting Xs when Professor Xavier confronts Magneto following the US Senate hearing in X-Men?

These are just some of the big-name movies mentioned in World Film Locations: Toronto, but there are plenty of less-well-known or older films that it also draws attention to. Trinity Bellwoods Park shines in Take This Waltz, the Don Valley Parkway plays a key role in Crash, and Casa Loma makes a subtle appearance in Maximum Risk. Whether for big-budget blockbusters or little indie productions, the entirety of a film or just a scene â the book points out how our city has played an important role in film for decades.

Although the book is primarily a discussion of different films, history buffs will also get a lot out of it. The book dives into events such as the Great Fire of 1904, the arrival of the Easton Centre, when and why different historical buildings such as the Opera House, the Fairmont Royal York, and many others were built and the ways they were used throughout their existence. You'll even learn about less-well-known locations in the city like the mysterious Lower Bay Subway Station and the nondescript Stoopy's Tavern. So, not only are you gaining knowledge on the history of film in the city, but you'll also learn plenty of cool facts about the city itself.

In keeping with the World Film Locations series mandate, each mini essay dives into how that particular location contributes to our connection to the film â and ultimately our perspective on the world around us. A location can prove to be so much more than merely a space chosen for its practical and visual appeal. Ultimately, as the contributors of the book make clear through their insightful connections and enlightening points, the right spot can hugely contribute to the themes of a film. Seeing how Toronto has done so is particularly neat.

One thing to keep in mind while reading is if you come across a film you've been meaning to see but haven't yet and you don't want any spoilers, flip to the next page. In detailing where events of the films take place, often important events and sometimes even endings are revealed. So if you don't want to know what happens in a certain film before seeing it, earmark that page and come back to it once you've watched the movie.

Despite having 16 contributors along with writer and editor Ue, the book comes together quite seamlessly. One writer might focus their attention slightly more on the historical aspects of a location, another might have a comedic slant and include a witty remark or two, while another's strengths might be in studying the symbolism of the film and the location. Fortunately, these diverse strengths and interests offer a wide variety of perspectives and therefore offer a little something for everyone.

Although you don't necessarily have to have spent time all over Toronto to appreciate this book, it's likely that the more familiar you are with the city, the more you'll get out of your reading. It's pretty cool to be able to look at a featured location and think, "Wow, I walk by that place all the time!" or "I didn't know that's what that building looks like inside!" If you don't know the city as well, you may lose a bit of that fun factor. But if you're from Toronto or are someone who is captivated by studies in cinema or history, regardless of your familiarity with the the specifics being discussed, you're likely to get a great deal out of the book.

Perhaps it is, as Tom Ue suggests, Toronto's urbane but indistinct architecture that has allowed it to stand in for such a wide range of locations, including Boston in Good Will Hunting, Chicago in Chicago, and New York in Cosmopolis. Or maybe, as one of the writers posits, it's the fact "Canadian cities look the way US cities looked several decades ago" â enough so that Dundas and Roncesvalles was able to masquerade as Baltimore Hairspray. Whatever the reason, there's no doubt Toronto has served the film community well over the years. These along with many other theories and examples are discussed in World Film Locations, and there's every likelihood you'll have your own thesis about why our city has such a large cinematic presence when you're done reading. 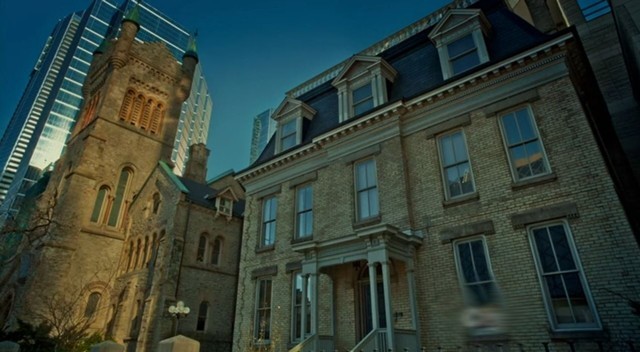 The only disappointing aspect of the book is the lack of solid conclusion. So many great points are made and ideas are raised throughout World Film Locations: Toronto but there is no final chapter tying all the pieces together. A final word reminding the reader of what all the topics mentioned say as a whole about Toronto would really put a nice button on the whole reading experience.

Even without a final summary, though, World Film Locations: Toronto mentions so many interesting locations and films that you're sure to be inspired to hunt down films you hadn't thought to watch or go visit a previously unknown location in the city. This is an insightful, visually appealing, well-structured read that is sure to interest Toronto lovers, history buffs, and cinema enthusiasts alike.