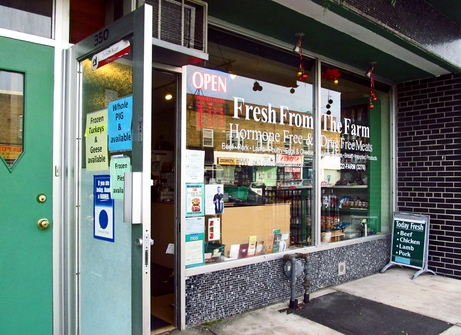 Fresh From the Farm Store is Located at the 350 Donlands Ave.

What is Fresh From the Farm?

I admit, it's not the most elegantly named store in existence, but the clunky name is more than compensated for by the products and the place itself. Fresh From the Farm (FFTF for the sake of brevity) started up about sixteen years ago under the ownership of Jacqui and Tim Schmucker, who are still in charge today. FFTF has been compared to an old general store in mood and appearance; one medium-sized room with a wooden floor, ceiling-high shelves along one wall, and the meat freezer and dairy fridge along another. FFTF specialises in organic, drug-free, free-range, and especially, local food; you can buy in-season fruit and vegetables here, along with some baked and canned goods, and a fair selection of animal products that haven't come from giant feedlots or factory-style farms. Most of the fourteen or so employees are part time, and I've never seen more than maybe five at once, at a busy period. Unlike the big grocery stores, this place is human-sized and personal, and prides itself on personal, human service.

What Does It Represent?

The FFTF website will tell you that the store has been "providing the GTA with local, farm-fresh, hormone-free and drug-free meats, produce and other products from Ontario Amish and Mennonite farmers since 1996." There's a lot to unpack in that sentence. To begin with, one might wonder (well, I did) why the store makes such a big deal about the religious leanings of its suppliers. What is so special about the Amish? And what is a Mennonite? When I interviewed Tim Schmucker about FFTF, he gave me several hints in this area. 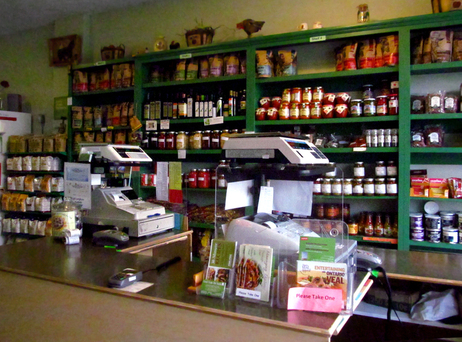 Both Amish and Mennonites belong to the Anabaptist stream of Protestant Christianity, but splinter off into dozens of similar but slightly different subgroups which can range from very traditional, conservative "horse and buggy people" (Tim Schmucker's term), to quite modern 'progressive' adherents like Schmucker himself, who lives in the city, drives a car, and operated a cell phone with no more than the usual amount of difficulty and annoyance. The reason religion matters here is because both Mennonite and Amish lifestyles tend to be family and community based, with less emphasis on profit and material 'success' than might otherwise be the case in our money-driven society.

The fact that their farms are often family businesses involving more than one generation also means that many farmers have the knowledge and traditions of the past to guide them through the present. They're also (in Schmucker's view) somewhat insulated from the hardships that are assailing many modern agricultural operations. While more conventional farmers are often on quite shaky ground, financially, the farms behind FFTF seem to be chugging along with less trouble. "They don't go mega" in Schmucker's words, but they don't die out easily, and the next generation is already moving forward to take up the task. There are also some 'born again' farmers who have grown up around agriculture, left for the big city, and have since come back to the land. Although quick to point out that size (or rather, lack thereof) does not necessarily indicate a healthy approach to animal welfare, Schmucker did agree that the Mennonite mindset is conducive to more humane, sustainable farming than the big industrial method. 'Exploitation' of land or animals "was never a part of their frame of reference." 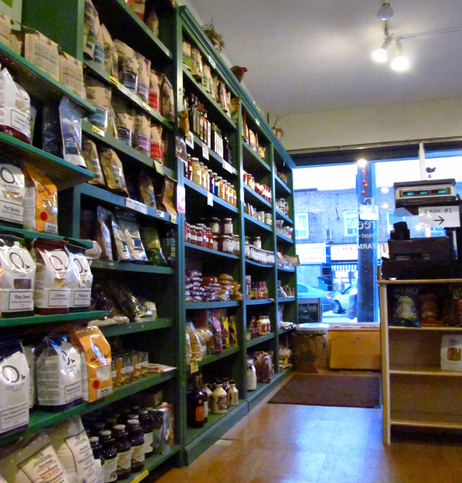 "Family farms, in general, take much better care of land and animals than factories. Than agribusiness."

Both environmental sustainability (facilitated by small farms and a lack of chemicals) and the humane treatment of animals are mentioned as guiding principles on the FFTF website, as is something called 'Food Justice'.

"The 'food justice' movement seeks to provide safe and healthy food that is produced by both ecologically and economically sustainable processes."

Although it's not mentioned on the site, Tim Schmucker suggested that a fair wage for farmers and store employees was also a part of this mindset. He told me about checking with his suppliers to make sure that they feel fairly compensated for their efforts. He also mentioned keeping his own prices down to a "basic" mark-up. I have to take Mr. Schmucker's word for this, but I will say that, while it is more expensive than an ordinary (imported, non-organic, feedlot, etc.) grocery store, FFTF is generally cheaper than any of the speciality butcher stores or farmer's markets that I've been to (especially the sandwich cuts). 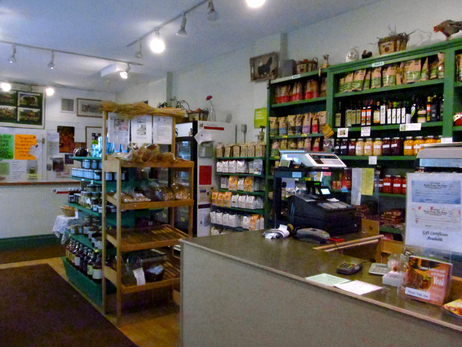 I got an interestingly mixed response when I asked Mr. Schmucker what he thought of the growing trendiness of local and organic food – a movement which has gained most of its prominence since FFTF opened. While he sees the basic rise in popularity and awareness of local and sustainable food as an improvement over past indifference, Schmucker said he was concerned.

"In many ways, the whole certified organic movement has been usurped by big agriculture. So you get things that are certified organic from anywhere around the world that's produced by agribusiness, not small, sustainable family farms. Is that all bad? No, I wouldn't want to say it's all bad, but that wasn't the roots of the movement."

This is one of the reasons why a lot of FFTF's produce is not actually 'certified' organic.

There are reasons to believe that local and organic (certified or not) are a bit more than a passing fad. I was introduced to FFTF by Brian Cook, a writer and researcher for Toronto Public Health (the government agency tasked with improving and protecting the general health of the city's population). Cook is one of the five Public Health employees working on the Toronto Food Strategy Project, the goal of which is to set out guidelines for a healthy and sustainable system for feeding the city. The project hinges on the idea of Food Security, a term for which there Cook says there are at least 450 different definitions. When Toronto Public Health people talk about Food Security, they're generally using it to refer to the ability "to have secure access – in dignified ways- to safe, healthy, and affordable, and culturally diverse foods at all times," according to Cook ('dignified' in this case means not having to rely on food banks).

This is where FFTF comes in, in its own small way. Being free of pesticides and hormones, the food at FFTF is healthier than a lot of its grocery-chain counterparts, but it also comes from a different source. Part of Food Security involves a diversity of sources, so that if one source (say, China) fails, or is unsafe, others will fill the gap. The Schmucker's emphasis on Food Justice (which actually sounds a lot like Cook's definition of Food Security) not only makes FFTF's food healthier and more sustainable, but offers a little more support to farmers themselves, making it easier and more likely for them to continue supplying the population with food. I should note here that that last point is not a small one. According to Brian Cook, one of the underlying dilemmas of our current food production system is the fact that "for many people in the city our food is too expensive, and for many farmers, our food is too cheap." In fact, regardless of how pinched you may feel when blueberries are four dollars a pint, Canadians have one of the world's cheapest food supplies, and it's the farmers who often pay the price.

"Our farmers have been told for many decades to invest in new technology, new ways of ramping up yield and they've been told that they would get more and more profits and higher farming prices, but they tend to get squeezed by the people in the middle. So a lot of them aren't making a whole lot of money."
—Brian Cook 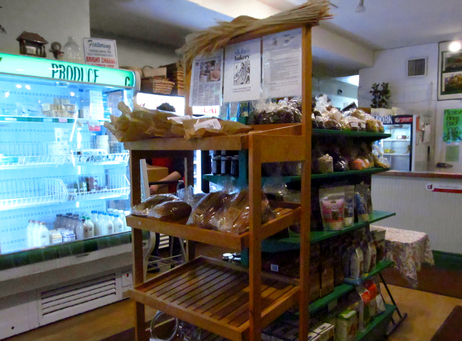 Farmers, in Cook's view, "are in a really tough spot" financially. "A lot of people in the city have no concept of the reality of agriculture these days and the incredible pressures, and the fact that the average Ontario farmer makes only about eight thousand dollars a year from their farming operations, and that eighty percent of their annual household income comes from off-farm employment. Not from government subsidies, but from working as a bus driver, or a realtor, which is quite insane given the incredible land and access to water and access to markets that we have here."

Cook's suggestion for farmers hoping to get out of this predicament is one that Tim Schmucker might approve of; talk to their customers

"Maybe the best thing they can do is to just start talking to more of the people in the cities. That's one of the big problems we have, is very much a lack of trust, and not a conversation that's going on between the farmers who are producing our food, and the people in the city."

This 'conversation' is one of the driving purposes and major appeals behind FFTF. Not only are the Schmuckers trying to make sure that their farmers get a decent wage, they seem to take it as part of their mission to spread the farmer's stories, and to bridge the gap between the people who buy the food and the people who grow it. At FFTF, unlike, say, Metro, you can actually learn the name of the family who produced the meat you're buying, and find out how they raise their animals. According to Tim Schmucker, this is one of the most common reasons people give for shopping at his store: "People can trust what they buy here, because we can tell the story behind the food."

That's a story everyone should hear.