Summer heatwaves scream for ice cream. While Toronto already had a fair selection of variations on the theme of frozen dairy dessert, that hasn't stopped three more from showing up this year. 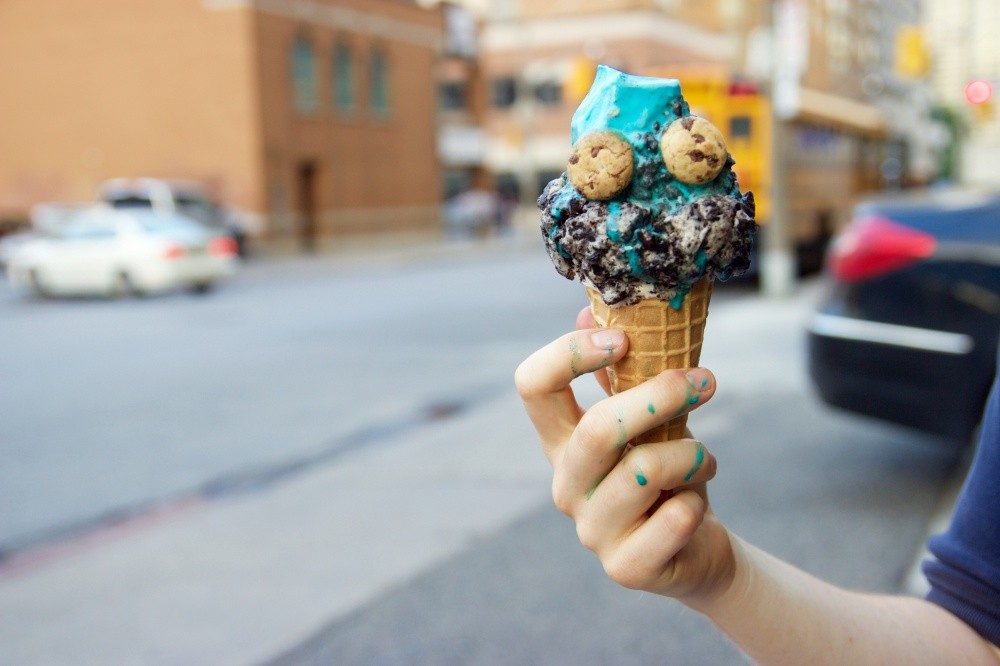 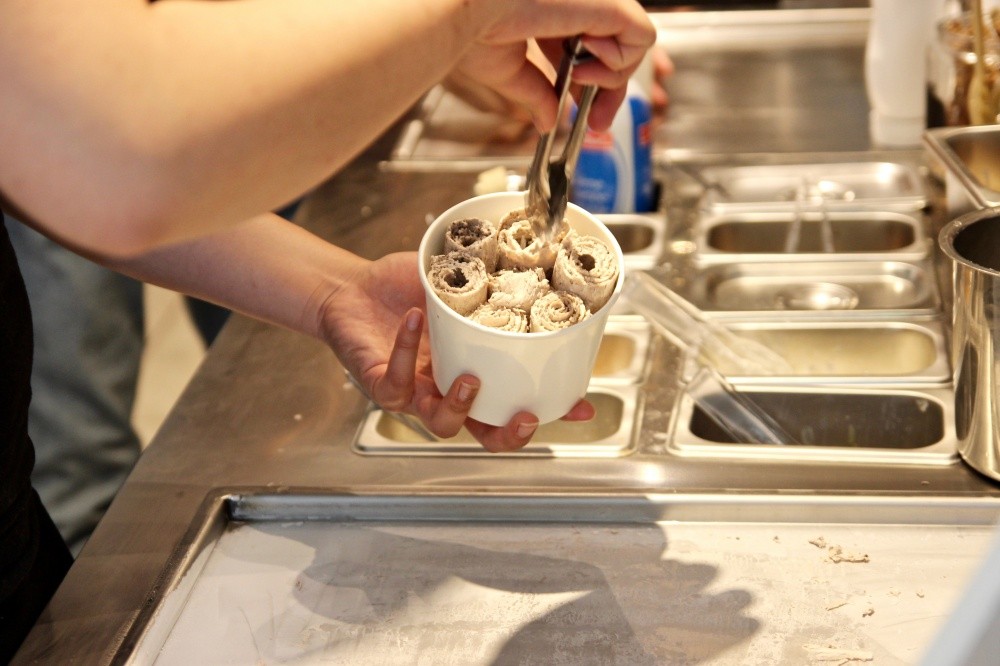 Sitting at 21 Baldwin St., a couple blocks west of University, Arctic Bites opened in the spring of 2016 as part of the Thai rolled ice cream fad that's hitting North America.

Rolled ice cream (sometimes deceptively called stir-fried ice cream) is an Asian innovation based around rolling flavoured dairy products into tubes with the aid of a supercooled tray or pan. What the initial benefit of this process was, I don't know, but here in Toronto it seems to have made the 'new and trendy list'. If the Yelp reviews I read are to be believed, there have sometimes been hour or even two-hour long line-ups to get into Arctic Bites.

Take note though, before you do get in; if you savour the vast selection at Ed's Real Scoop, and delight in designing your own custom sundae, then this is definitely not the place for you. If you want just a plain scoop of vanilla, then this also isn't the place for you. If, however, the notion of Earl Grey flavoured ice cream rolls garnished with chocolate-almond clusters and condensed milk piques your curiosity, then go on in.

You won't find anywhere to sit though, once you do get in. There is a bench along one wall for the weak and waiting, but for eating seating, look elsewhere. The atmosphere is clean and sparse and, when we went at 7 pm on a Thursday night, very busy. 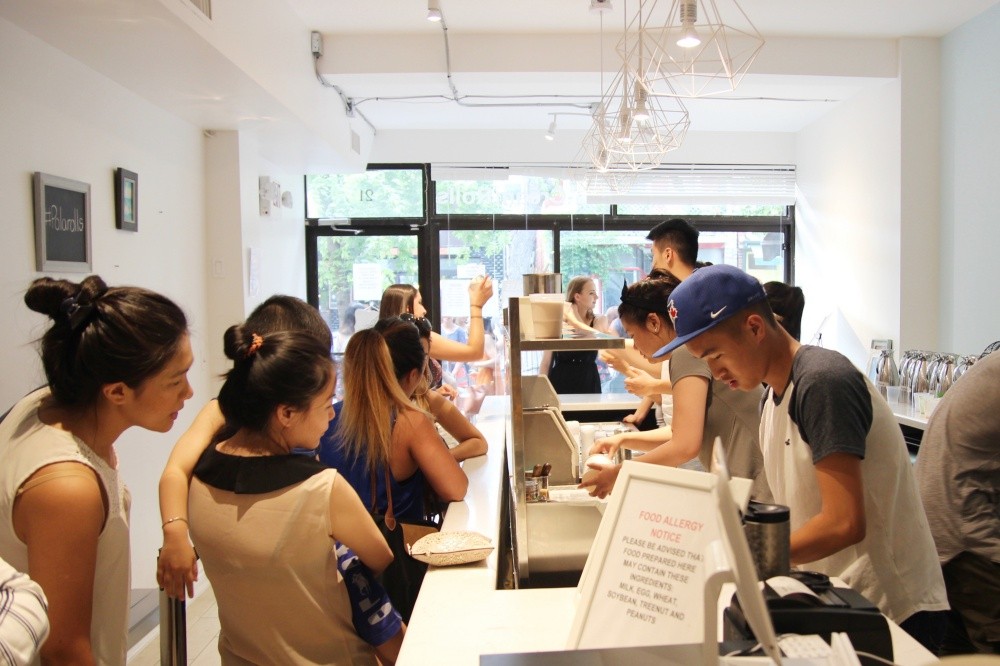 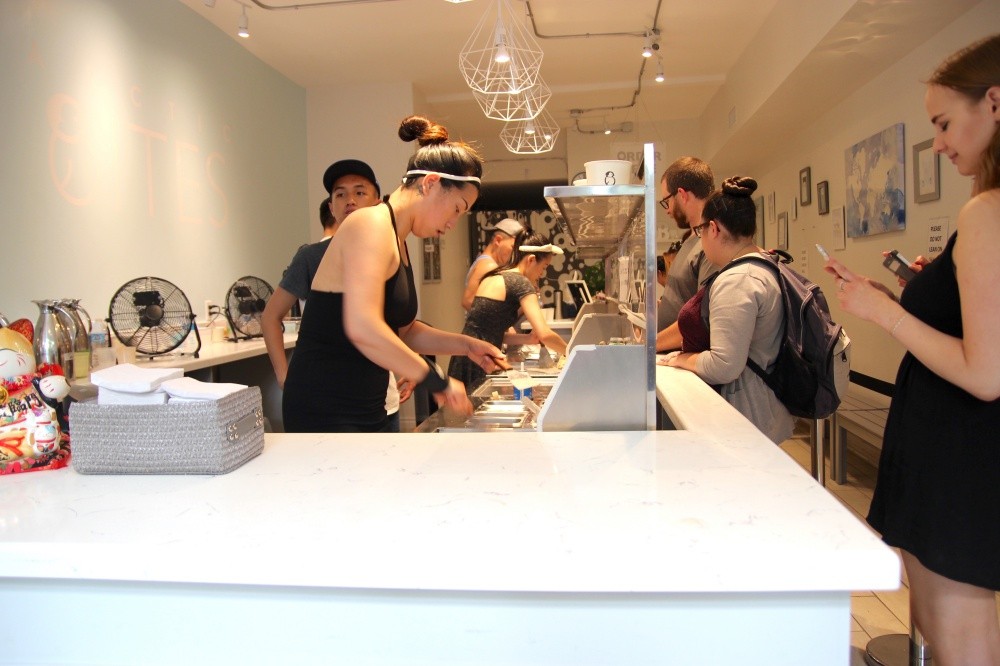 I already said that Arctic doesn't have a wide selection of flavours. What it also doesn't appear to have is any choice when it comes to toppings or portion sizes. Everyone gets six rolls, along with a few predetermined embellishments such as whipped cream or condensed milk. If you want more, buy another cup. If you want less, bring a friend – preferably one with a good job, because a cup of six Arctic Bites rolls costs about $7.

So why go? First of all, the novelty value is fairly high. Besides the Earl Grey, you can get coffee, strawberry, green tea or even black sesame (with grass jelly, just in case it wasn't strange enough already). I have somewhat conservative tastes when it comes to ice cream, so I chose chocolate mint (with whipped cream and an oreo cookie). My more adventurous companion went with taro-coconut, even though neither one of us actually knew what taro was (it came with a big, fan-like cookie and a handful of little jelly candies called mochi balls, which struck me as a good start).

Interesting flavours aside, the main reason to go to Arctic Bites is for the rolling. Once we'd ordered, we got to watch as semi-molten dollups of our chosen ice cream were spooned onto a supercooled skillet. Here it was spread out into a thin sheet (oreos were pounded to pieces into mine at this point), and then carefully scraped up and rolled into six hollow, layered ice cream tubes. Then they stuck the toppings on in an aesthetically pleasing manner, handed us our spoons, and off we went to hunt for somewhere outside to sit down. 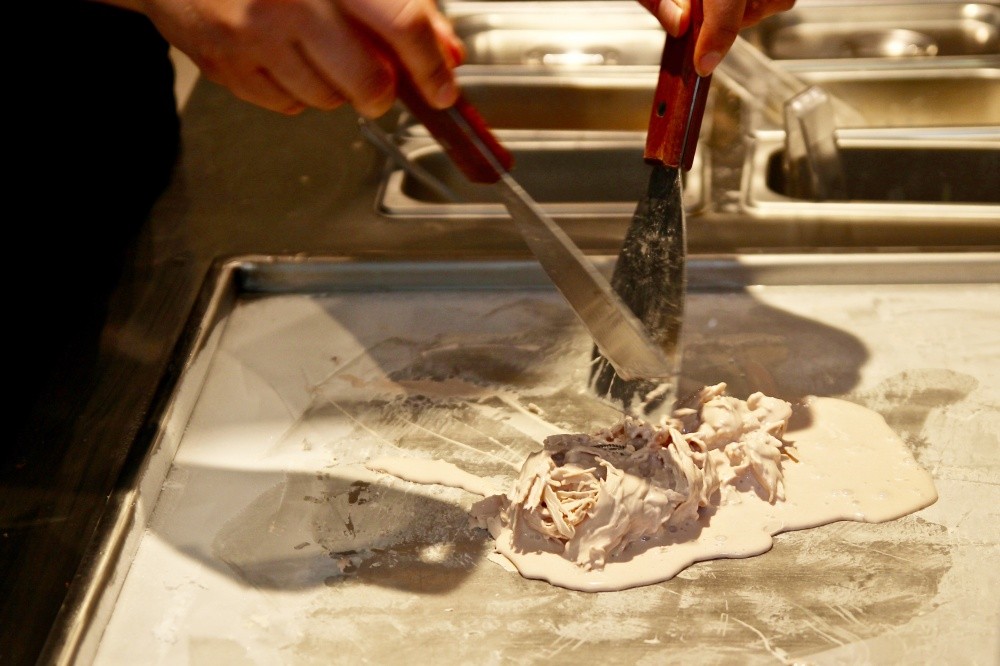 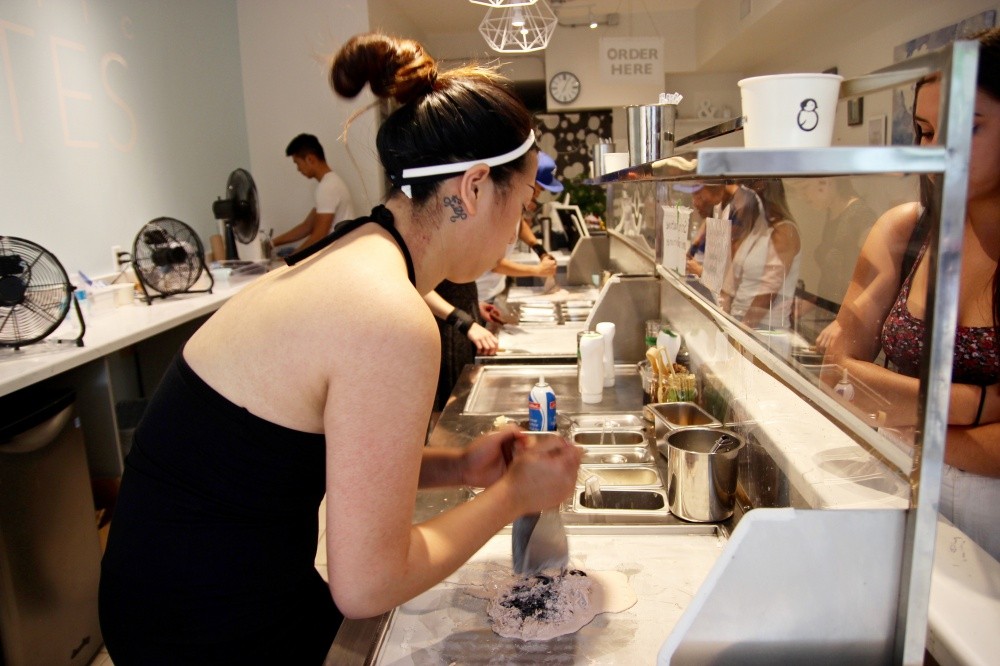 After all that wind-up, I'm happy to say that the ice cream is quite nice. As the Arctic Bites website points out, the supercooling process make the ice cream denser, leading to a smoother, creamier texture. More importantly, even before they start playing with its density, the ice cream itself is particularly good; neither of ours were too sweet (which is a real danger with coconut), and the the chocolate mint was just about a perfect balance of both flavours. It's true the taro-coconut was painfully mild, but given that taro turned out to be a tropical root vegetable, that may be a good thing. 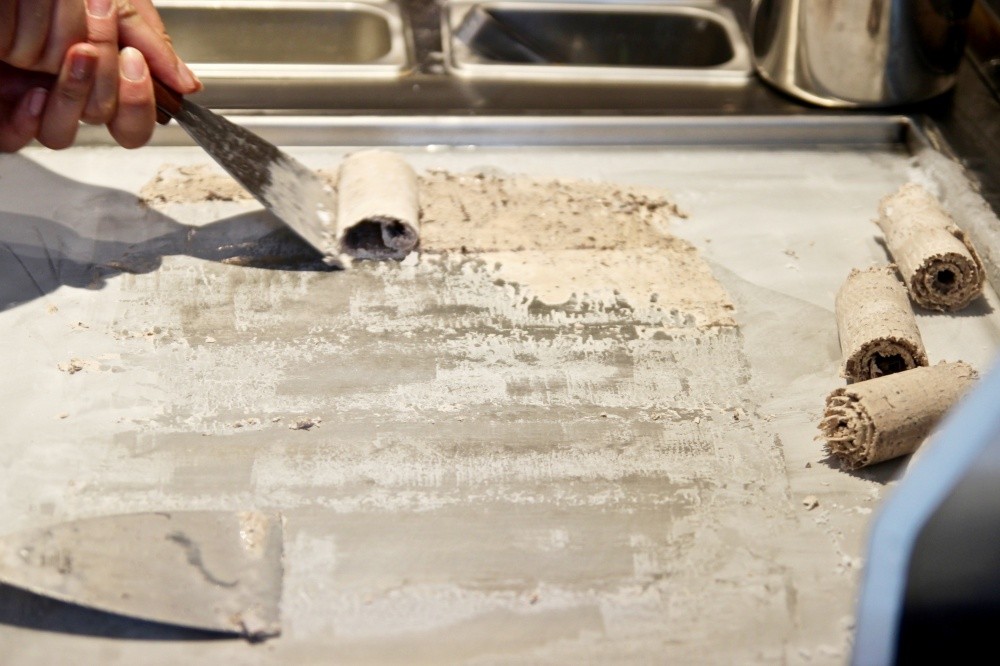 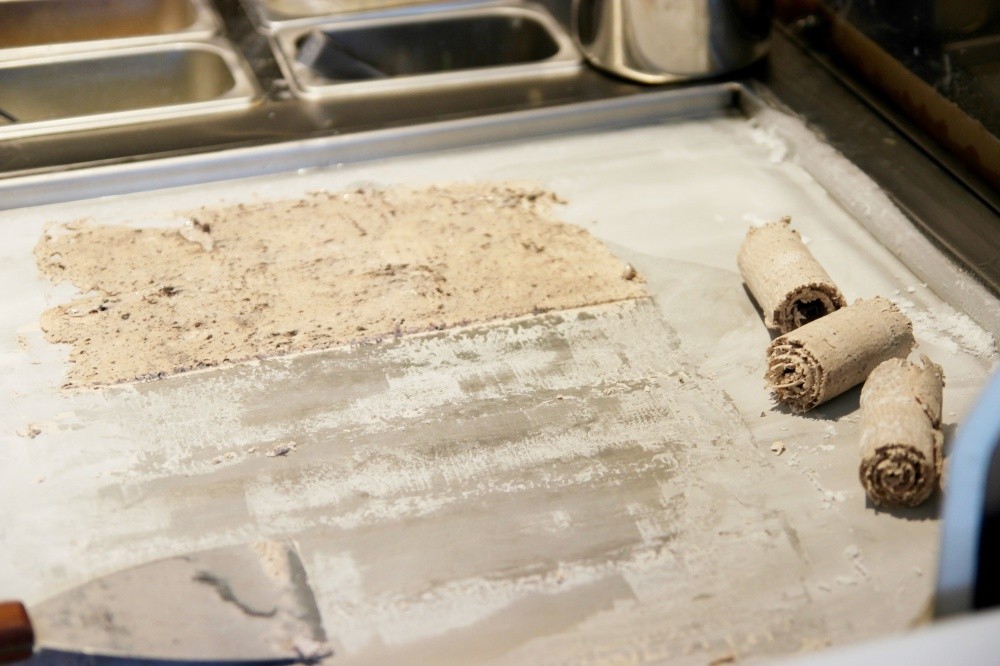 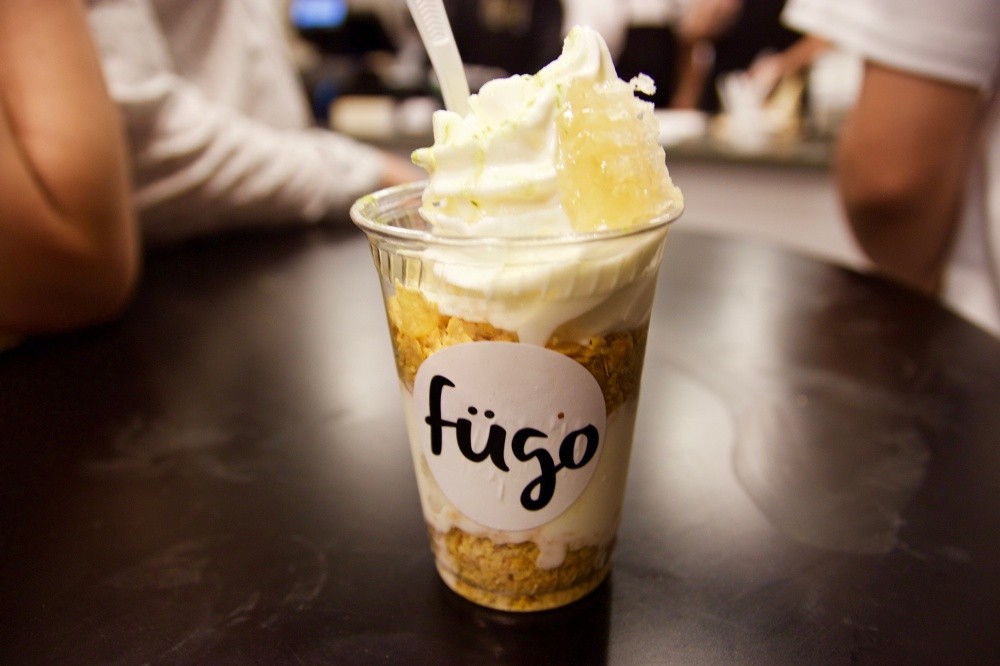 The life of a food writer is a thankless one. As soon as we were done with Arctic Bites, we walked down and across University, where another new, cheery little frozen dessert joint has recently sprung up like a frosted daisy amidst the pavement and towers at 205 Dundas West.

Like Arctic Bites, Fugo Desserts opened in the spring of 2016, and is similarly limited in size and comfort (I did see one small table and a couple of stools in the front of the store, but that's it. There's no sign of a washroom, either). There is less of a trendy novelty angle here, although the huge, wall-sized chalkboard decorated with descriptions of the house specialties made us assume that plain, single scoops weren't an option (allegedly, they are), and nowhere did I see a mention of fruit (seriously. Not even strawberry). 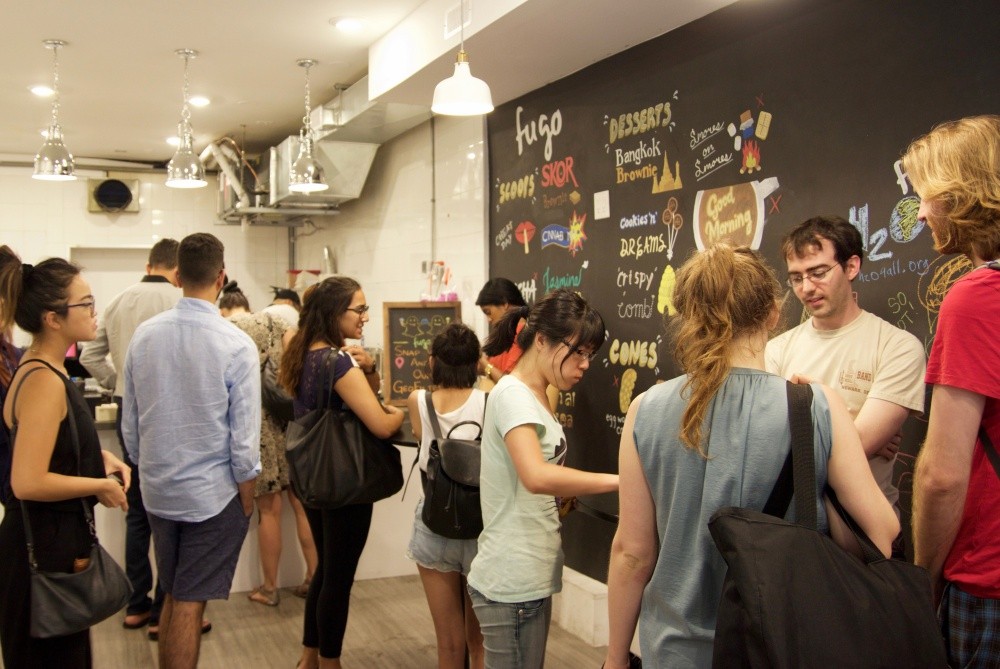 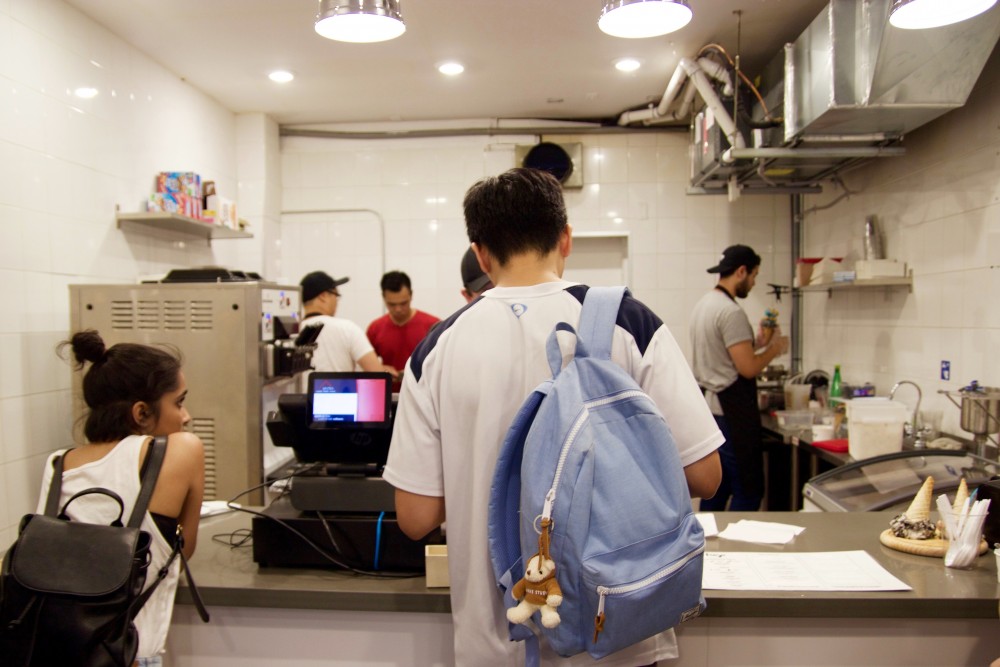 You can order green tea or black sesame ice cream here, but you can also get something more traditionally decadent and ridiculous, such as two scoops of blue cookies and cream ice cream, studded with miniature chocolate-chip cookies, dripping menacingly from a waffle cone encrusted with bits of oreo cookie, cinnamon toast crunch cereal, fruit loops, and s'mores. They aren't kidding when they call this thing the 'Cookie Monster' (I'm still amazed that none of it ended up on my shirt). My stalwart assistant's 'Crispy-comb' (vanilla ice cream mixed with corn flakes and topped with a piece of real honeycomb) was much more modest, but less entertaining for spectators, since it came in a cup and didn't turn her lips blue.

While Fugo may have an advantage over Arctic in fun and variety, it does so at the cost of quality. Both our concoctions were too sweet, with slightly less creamy textures than Arctic's super condensed goodness. It's a matter of taste, of course, but I can't forgive them their lack of fruity flavours, either. 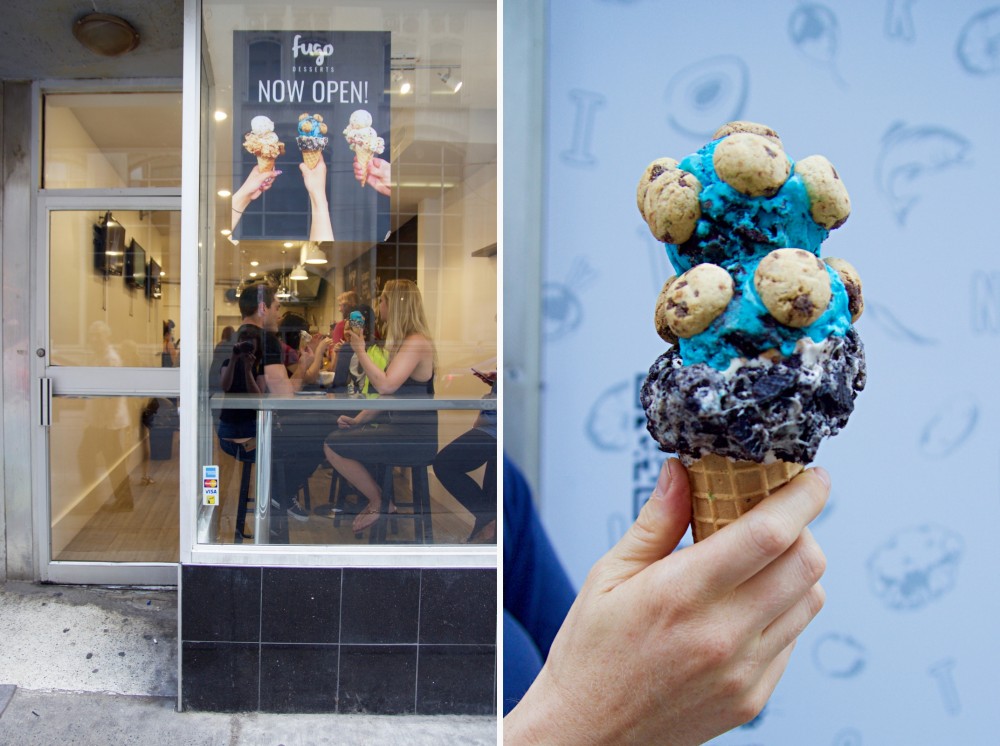 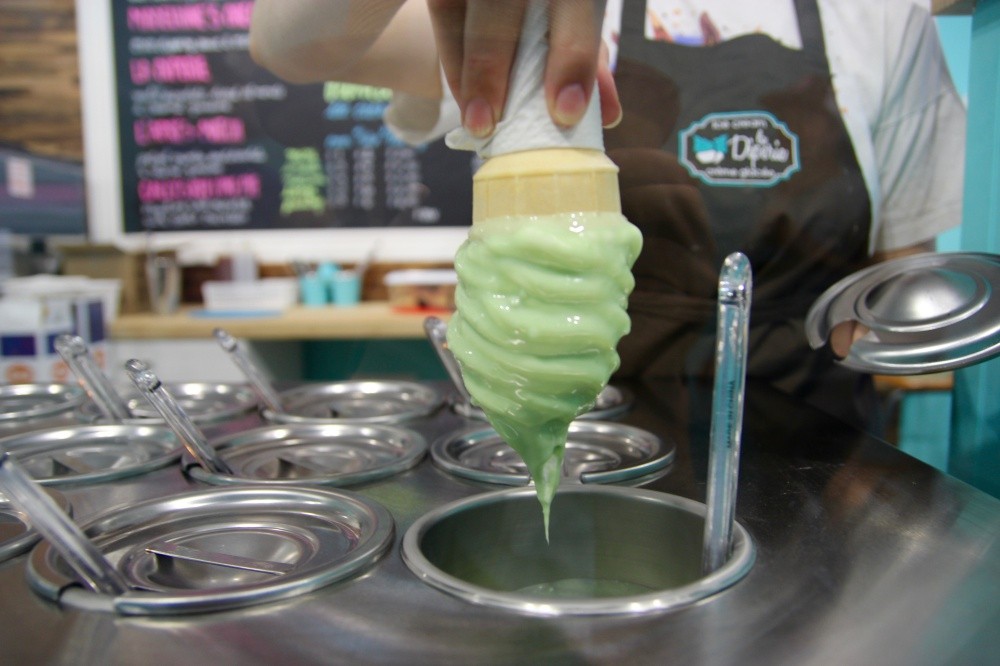 After visiting one ice cream place with only eight menu items, and another that didn't believe in fruit, we rounded out our unusual ice cream tour stopping by a new East End spot that only serves one flavour of ice cream.

But it actually kind of works.

The first La Diperie opened a few years ago in Montreal, and has since spread to several other Quebec locations. The baby of the bunch just moved into 372 Danforth Avenue, making it the first of the family to land in Ontario.

The La Diperie idea is an old and simple one; everyone gets a cone or a cup full vanilla ice cream. Then – in a process which I don't fully understand despite having witnessed it first hand – the ice cream gets dipped upside-down in your choice of coating sauce, and sprinkled with your selection of toppings. By the time it's handed to you, the coating on your cone has hardened into a shell that keeps the soft ice cream from completely running down your arm as it melts (having said this though, that shell does crack, and can be a bit awkward to get through at first. As with Fugo, this may not be the best place to go if you're trying to impress a date with your elegance). 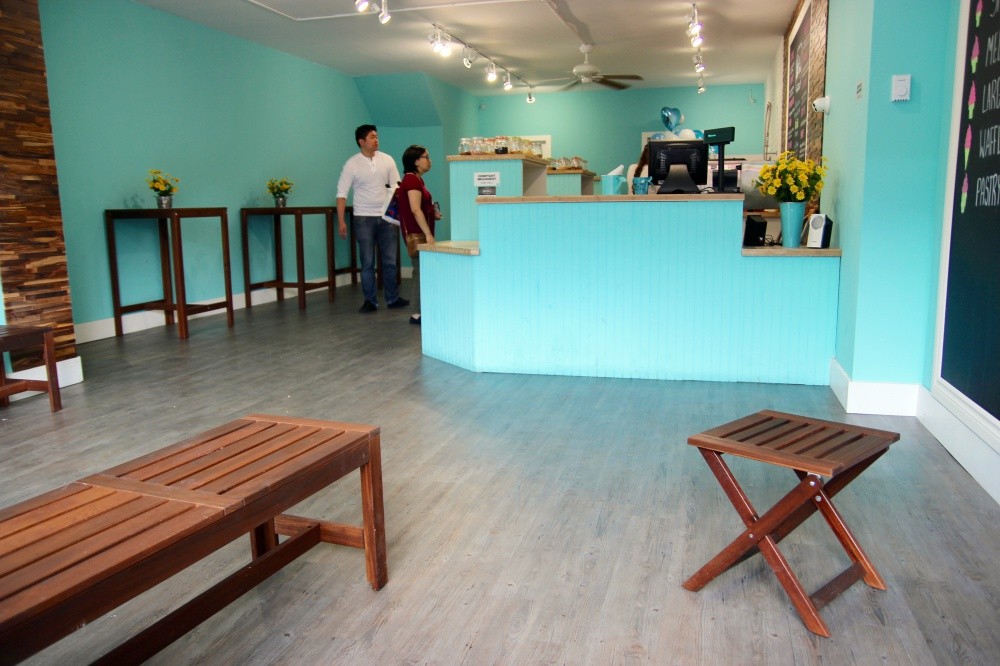 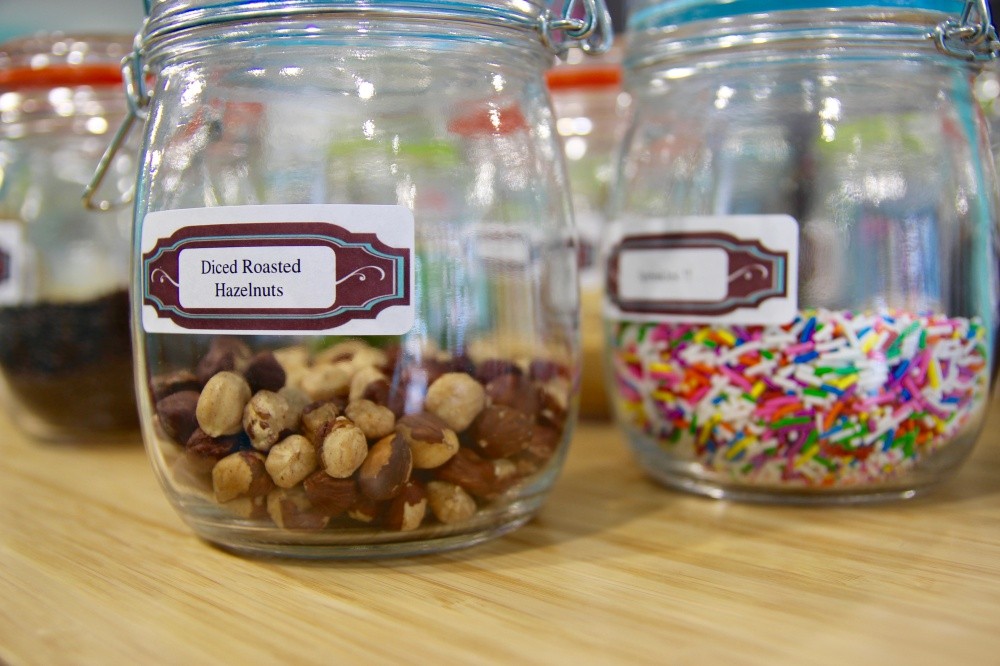 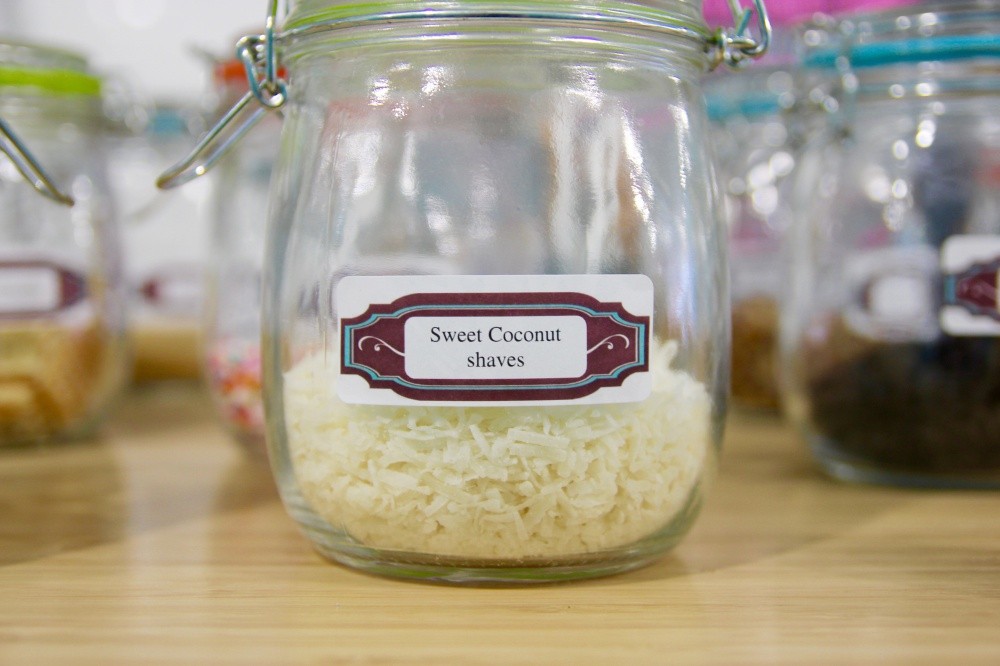 To compensate for their lack of ice cream diversity, La Diperie offers an impressive selection of dips and doodads for toppings; I saw the increasingly ubiquitous green tea on the dipping list, along with chili, banana, caramel and maple, to name just a few. The toppings list is also quite extensive, and like the sauces, is about 85% fairly sensible and slightly innovative, and 15% rather weird (they'll put peas on your ice cream. I am not making this up). 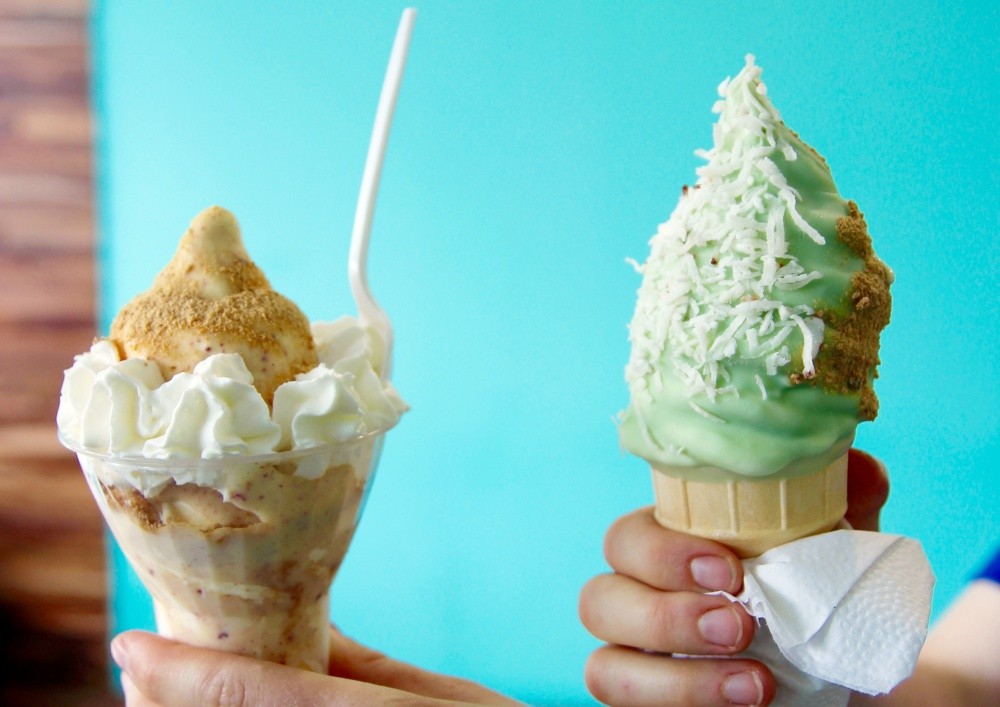 La Diperie has a bit more space to work with than either Arctic Bites or Fugo, and there are a couple of benches for those wishing to dine in, but there's still no washrooms in sight. They have a nice selection of portion sizes (and a pastry cone, which I really wish I'd tried), and the prices are pretty reasonable. As one might expect from this, the ice cream isn't quite up to Arctic Bites standards, but it's not bad. The problem, if there is one, is in the coating sauces. Fixated as we were on fruit at this point, neither one of us tried either of the dark chocolate dips, but opted instead for key lime pie and raspberry cheesecake, both of which were rather sweet and mild (and utterly lacking in citrus tang).

Conclusion: For very good quality ice cream in a very small selection of trendy and unorthodox flavours, go to Arctic Bites. For less quality, way more sugar, a bit more selection, and a distinct absence of fruit, go to Fugo Desserts. Those who love dolled-up vanilla at fairly comfortable prices should head over to La Diperie.