In our third part of haunted places in Toronto, we delve into the more public buildings in the city that have stood tall and proud despite having some very gruesome roots. Let's dig right in by taking you back in time through history to the War of 1812...

Fort York is a historic site of military fortifications and buildings that were constructed by the British Army and Canadian militia troops in the late 18th and early 19th centuries. The site was primarily used to defend the settlement and new capital of the Upper Canada region of York, namely from the newly independent United States. Fort York was first designated a National Historic Site of Canada in 1923 and then named a Heritage Conservation District by the City of Toronto in 1985. 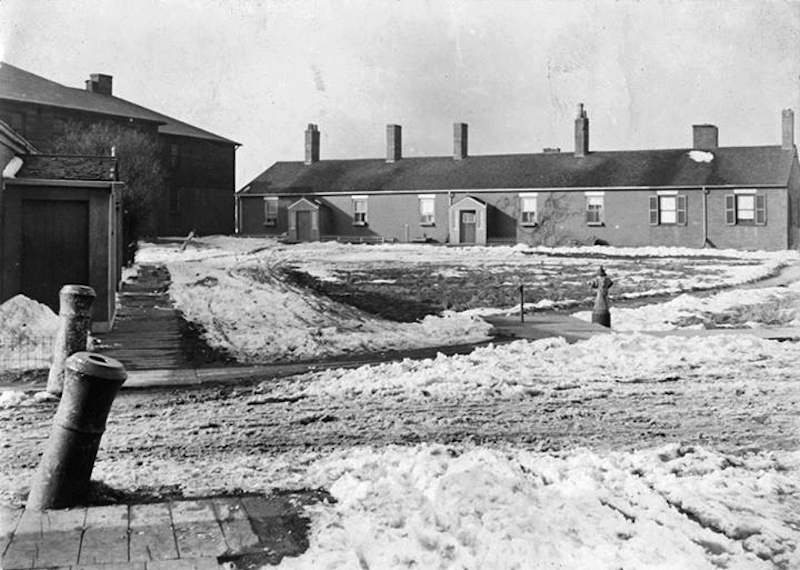 The Fort was destroyed in the Battle of York in 1813. On April 27th, the combined U.S. army and naval forces attacked York from Lake Ontario, overrunning the entire fortification. After the resolution of the War of 1812, the Canadian Royal Engineers rebuilt Fort York. Although the site's original buildings had been made entirely from wood, the new structures were built from a mixture of both wood and brick.

Fort York was used as a military establishment until 1880 and again during both World Wars. The site is currently operated by the City of Toronto as a museum that welcomes locals and tourists throughout the entire year. As far as ghostly sightings go, a woman is often seen walking around the officers' quarters as well as a red-coated guard who is seen both in the barracks and near the Fort's entrance. Ewan Wardle, a program officer at the Fort York National Historic Site, says:

People fought and died on the very grounds we are at, and some of these poor unfortunate souls met very untimely and very disturbing ends.

This massive Romanesque Revival structure was designed by famed Canadian architect Edward James (E.J.) Lennox and opened in 1899. It was originally home to Toronto's city council from 1899 to 1966 and was designated a National Historic Site of Canada in 1984. Upon its opening, it was considered to be the largest civic building in North America and it took longer than ten years to build at a significant cost of more than $2.5 million. The site became a dedicated courthouse in the 1960s once a new, larger, more modern city hall was erected just across the street. 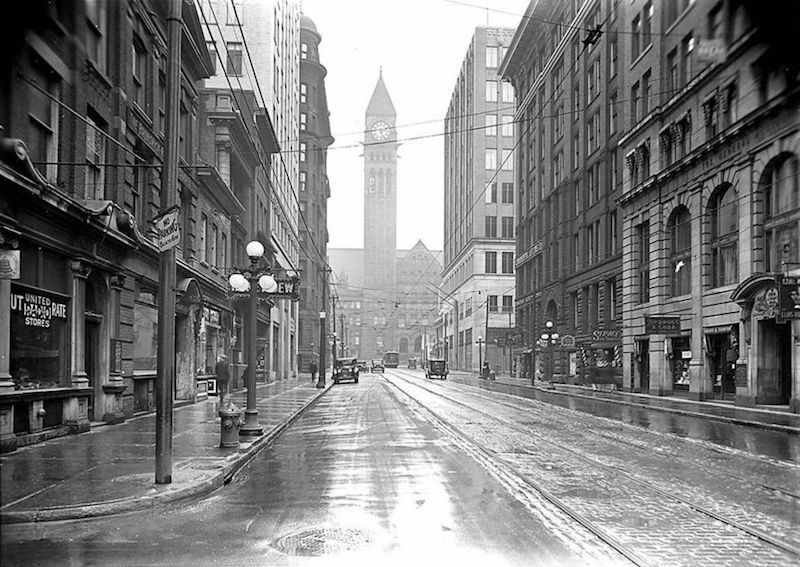 The building's rear staircase is the supposed dwelling place of a ghost that is said to playfully grab onto the robes of unsuspecting judges who are passing through its hallways. The ghost also walks the staircase at all hours of the day and night, frightening visitors by the loud sounds of its footsteps. The building's cellar was originally used as a holding area for prisoners and their moans can still be heard to this day if you're standing within the vicinity of that room. Also, the Northwest attic is said to contain a ghostly presence but no one is sure who or what it is. People who have been in the attic claim they are often suddenly overcome with a peculiar "feeling".

Perhaps the most active room in Old City Hall is Courtroom 33 which is believed to be haunted by the spirits of the last men condemned to hang in Canada. Because of this, many paranormal researchers and journalists have attempted to spend the night in this room every Halloween, as a tradition, of course! According to John Robert Colombo's Haunted Toronto, one group of reporters managed to make it through the night only to abandon their mission prematurely at 4:00 AM claiming they witnessed "cool fogs" and heard weird noises that left them "glued to the floor." 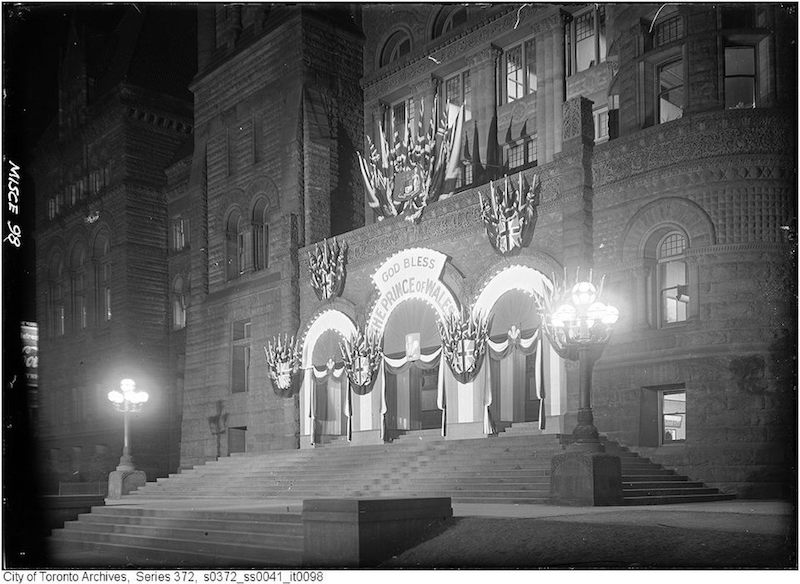 Officially known as the Toronto Jail, construction on this building was completed in 1864 and was used to house remanded offenders. It has since been renovated to serve as the administrative sector of Bridgepoint Health, a rehabilitation hospital located next to the jail. Designed by William Thomas in 1852 it is one of the oldest pre-Confederation structures that remain intact in Toronto. A modern east wing was constructed in 1958 to house an additional two hundred and seventy-six prisoners. By the end of its service, the jail's average prisoner load was a whopping six hundred and twenty! The jail justifiably developed a reputation for overcrowding and was closed in 1977. 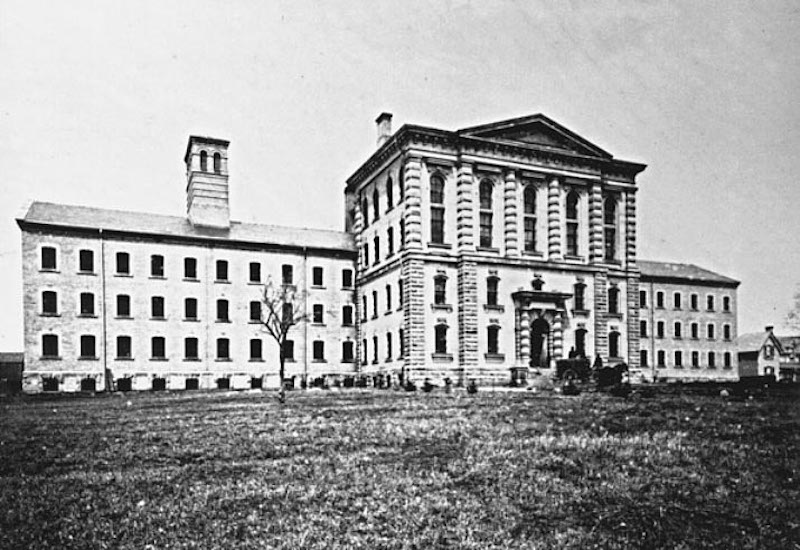 Before capital punishment was abolished in Canada, the jail was the site of quite a number of hangings with the building's first execution taking place in January 1908. The jail's most famous ghost is that of a former female prisoner who hanged herself in her tiny cell. She is said to float around the building's main rotunda and is believed to be a very angry spirit due to her frequent outbursts and screams. Visitors have claimed to have experienced heightened emotional feelings within the confines of the jail that are otherwise completely unlike them. Many of these visitors have either completely shut down emotionally whilst in the building or have burst into tears for no apparent reason at all. 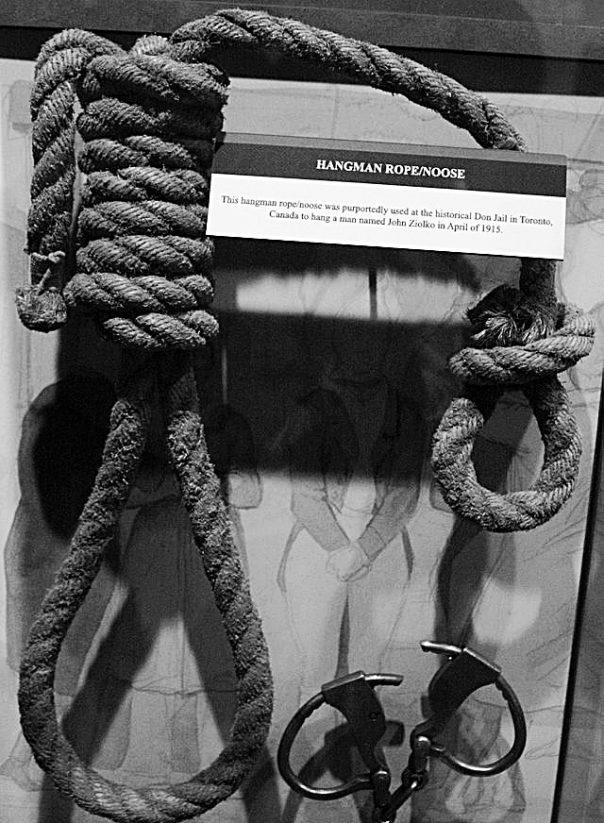 National Museum of Crime and Punishment - Hangman Rope from Don Jail, 1915 by David

In 2007, during an archaeological assessment, human remains were found on the jail's grounds. An anonymous reader submission at The Toronto & Ontario Ghosts and Hauntings Research Society reveals:

Five bodies were found in the parking lot behind the Don Jail [...] I was at the jail the day after the graves were covered up. I don't know if the discovery of the graves stirred things up but I tend to agree that such an emotionally-charged building would somehow contain some of that energy. I have never had such a strong emotional feeling come over me as happened at the jail.

This charming Arts & Crafts-style manor house sits atop the picturesque Scarborough Bluffs and was originally built for Colonel Harold Bickford back in 1914. Only a few years later, in 1921, the property was sold to the Roman Catholic Church's Foreign Mission Society and was renamed the China Mission College. That particular reincarnation of the home didn't last long and in 1932 the home was sold to Rosa Breithaupt Hewetson who was very passionate about the Arts. Hewetson turned her new home into a museum of sorts and the building then became known as The Guild Of All Arts. World War II struck soon after the manor was re-christened for the second time - it was generously made available to the military by the Hewetson family. The Guild was used as a training facility for the women's Naval Service and as a hospital for disabled veterans. 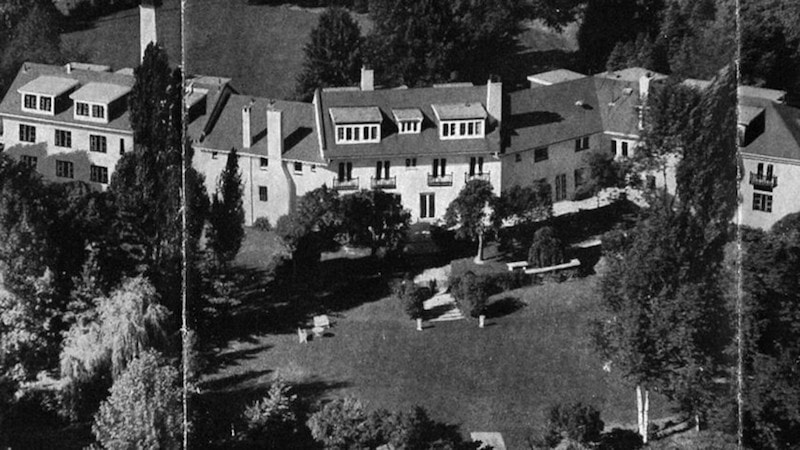 Decades later, by the mid-1960s, the Guild was transformed into a bustling, popular resort for locals and tourists alike. It became so popular, in fact, that in 1965 a one hundred-room extension was added onto the original structure as well as a brand new swimming pool. As Scarborough developed into a more urban area, The Guild Inn's popularity declined and the hotel was eventually forced to shut down in 2001. Twelve years later, in 2013, the lands and park surrounding the building began to show visible signs of decay and neglect. 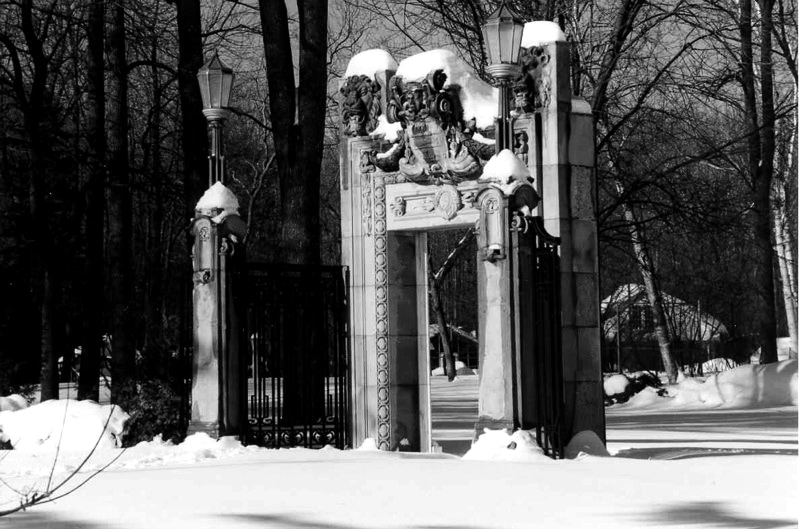 As far as paranormal activity goes, The Guild Inn has developed a curious reputation for being one of the most haunted buildings in Ontario. Researchers and journalists who have decided to stay overnight at the shuttered hotel have reported hearing loud noises followed by a series of vibrations that can be felt along the walls and underfoot, on the floor. Temperature fluctuations that occur from one room to another have also been widely reported. Finally, a ghostly figure has been seen in the basement of the Inn, hunched over in one of its corners. It then rights itself, walks away, and disappears into the basement hallway. Jonathan Castellino, a writer for blogTO who spent one chill-inducing night at The Guild Inn, says:

This will remain one of the most disturbing abandoned places I have ever visited. My one night stand with The Guild Inn solidifies in my mind precisely why these places are so intriguing and mysterious.

Also known as the Fairmont Royal York, this prestigious hotel first opened in June 1929, was designed by Ross + Macdonald and was built by the Canadian Pacific Railway across from the city's bustling Union Station. Before the Royal York was built, there were two previous hotels that sat upon this site in downtown Toronto. 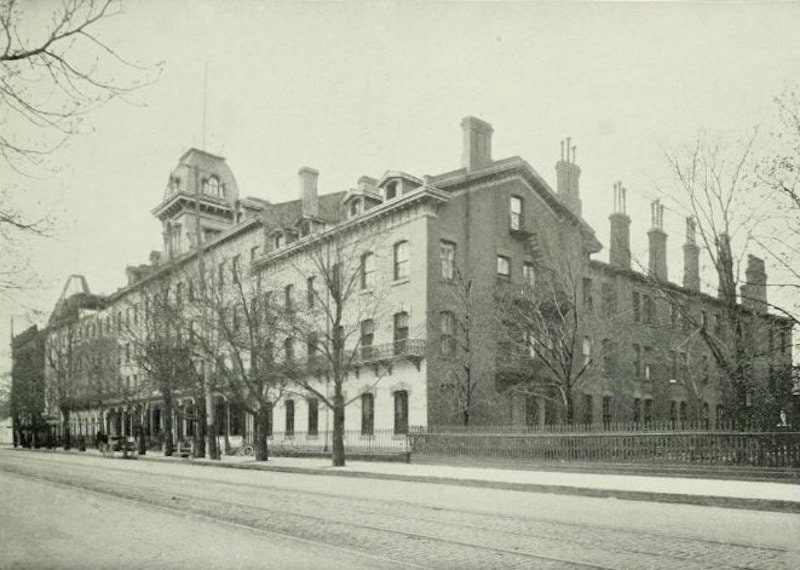 At the time of the hotel's opening, it was hailed as a state-of-the-art hotel featuring ten elevators, a radio in each room, and a private bath for each of its guests. The structure was eventually made bigger between 1956 and 1957, and once construction was complete, the Royal York boasted 1,600 rooms earning the title of the biggest hotel in the Commonwealth. It is worth so much, that when Her Majesty the Queen and/or members of her family come to Toronto, they choose to reside at the Royal York. An entire floor of the hotel is reserved especially for them and the Queen occupies what is known as the Royal Suite.

In his book, Mysteries of Ontario, author John Robert Colombo says that the spirit of an older gentleman with grey hair haunts the eighth floor of the hotel. He roams the halls at night often scaring guests and staff. Also, it is believed that a former employee who hung himself there haunts one of the staircases leading up to the roof of the building. Members of the hotel's maintenance staff have said that they heard someone screaming in that area as well as loud footsteps echoing through the halls. When they had gone to investigate, they never found anyone there.

The immense Crystal Ballroom is housed in the hotel's penthouse but it's been closed for years due to it's not meeting fire code regulations. The building's service elevator is said to make frequent trips to the ballroom despite anyone actually pressing the button for that particular floor. Chandeliers in the ballroom have been known to shake on their own and guests of the hotel who reside in the suites directly below complain of hearing loud music playing and boisterous talking coming out of that space. Sonia, a mother of two young girls, relates:

I've stayed at the Royal York a couple of times in the past and each time I've been there I've witnessed something peculiar. I definitely saw something that resembled a ghost in the hallway as I was making my way to my room one evening but didn't think much of it until the next morning when one of my work colleagues told me the hotel was supposedly haunted! Can you imagine how scared I was?! I'm not one to believe in ghosts, but I'm sure I spotted something that night."