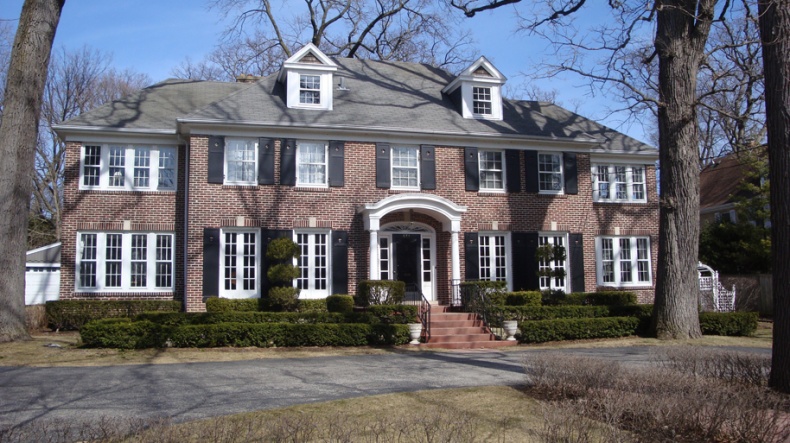 You don't have to be an actor to become a film star and this famous house, located just 30km north of Chicago, is the indubitable proof. The primary filming location for the first Home Alone film, where a young Kevin McAllister (Macaulay Culkin) heroically fought off burglars, is currently on sale. The house is apparently still as splendid as it looked on the screen 20 years ago and, allegedly, it's a booby-trap-free zone now!

The current owners, John and Cynthia Abendshien, bought the house just 18 months before it became a film set in 1990. The price of the home was $875,000 US back then, while the current offer stands at $2.4 million. The house was used for shooting most of the scenes in Home Alone and the first four scenes of Home Alone 2: Lost in New York.

The red-brick colonial Georgian home, built in 1920, is located at 671 Lincoln Avenue in the village of Winnetka (part of the Greater Chicago Area), about 30 km north of the city in New Trier Township. It is a three-story single family detached house. It features 5 bedrooms, 3.5 bathrooms, a fully converted attic, a fireplace, a detached double garage, and a greenhouse. However, "Kevin's tree house" in the backyard was demolished after the shooting, as it was built specifically for the film. It is a well-known Chicago-area tourist destination and it's often cited as an example of "How to Get Your Home in the Movies."

The kitchen, the main staircase, the basement, and most of the first floor landing were all shot in the actual property. However, most parts of the house were carefully recreated on a sound stage in a high school gymnasium, which enabled the film-makers to perform all those crazy stunts without causing any serious damage to the house.

According to the Toronto Star, the Abendshiens are empty nesters, so it's probably no surprise they're looking for something a little less majestic and noble.

"John Hughes had a real interest in filming in community settings, (…) he really wanted his sets and backgrounds to have a real world, a real true neighbourhond and a true home ambience," John Abendshien claimed in a promotional video for his home.

"This is our home, it is our everyday life… And frankly we don't think about it all that much. And yet there are times when we are reminded that the house is somewhat of an icon," Cynthia explained. "We're just a family living here," she added.

So, if you're interested in owning a film star, visit the official site to find out more!