Just a three-minute walk north of Lansdowne station is a vacant TTC storage facility slated for major redevelopment across from a series of established, single-family homes. Among them is this detached house with a garage that mounted enough interest to generate five competing offers this fall.

This 2 1/2-storey structure was erected on a 20-by-93-foot lot about a century ago, but the mechanics and living and dining rooms were all modernized by a previous owner.

The seller renovated all three bathrooms and the second-floor master bedroom as well as the eat-in kitchen, where stainless-steel appliances, tile backsplashes, a marble floor and Cesarstone-topped peninsula were installed. A rear entrance off the kitchen gives access to a new two-tiered deck and stone patio.

The lower level consists of a recreation room, while the upper floors are sectioned off for four bedrooms. 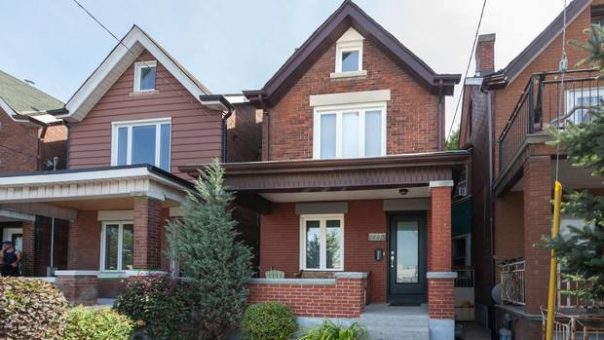 “It was really well priced because it’s on a busier street, but comparable houses were not detached – usually they were semi-detached – and not as renovated,” says agent Julie Kinnear, who notes the street is destined to improve once work progresses on the TTC yard.

This house’s value has increased with modern touches, from a wood-lined alcove in the master to exterior trellises lined with foliage.

“What [the sellers] did was contemporized it. It had a suburban feel before and this time it’s very downtown, very cool, very white and bright with splashes of green,” Ms. Kinnear explains.