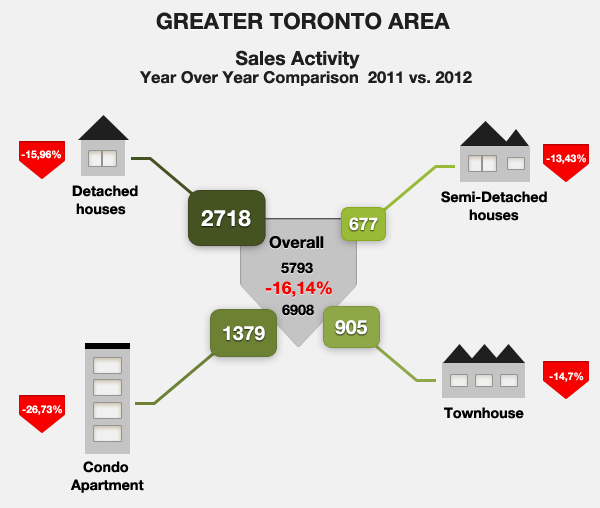 16 per cent sales drop in housing sales in Greater Toronto Area in November compared to the same time last year has been a shock. A certain recession was predicted but 16 per cent is a lot more than anyone expected. This is the main reason why Toronto realtors are strengthening their call to abolish the land transfer tax. Several city councillors say that no matter how strong the calls will be the Municipal Land Transfer Tax now provides revenue that the city can't afford to lose.

TREB's chief government and public affairs officer Von Palmer argues that as the housing market slows – due in part to the tax — the city is losing millions in economic spinoffs. His calculations are supported by a 2009 study conducted by Altus Group Economic Consulting for The Canadian Real Estate Association that found that for each real estate transaction taken off the market in Canada, an average of $46,400 in economic spinoff is lost.

Things like furniture, appliances, renovations – these are a whole host of industries that depend on real estate, over and beyond the financial services and the legal industry.
—Palmer

Despite the drop in sales, prices remained firm. The average selling price was up by 1.6 per cent and reached $485,328. The MLS® Home Price Index (MLS® HPI) Composite Benchmark was up by 4.6 per cent compared to last year.

Sales of detached properties on the MLS® in November 2012 continued to decrease. Sales decreased by 13 per cent to 2718 units. The average price, however has not changed and stayed at $608,672. Detached houses have been the best selling house type past month.

Semi-detached houses saw the mildest recession of only 11 per cent. Last month 677 units was sold with an average price of $471,083. The average price is up 4 per cent.

Once over-heated condo market has been cooling down rapidly and last month sales fell by 25 percent compared to last year. There were 417 condos sold in November 2012. Average price of a condo unit decreased by 2 per cent and was $330,341.

"The moderate annual rate of price growth compared to previous months was largely due to a different mix in detached home sales this year compared to last, particularly in the City of Toronto. The share of detached homes that sold for over one-million dollars was down substantially, which influenced the overall average price," said Jason Mercer, TREB's Senior Manager of Market Analysis. "The MLS® HPI detached benchmark price, which tracks the price for a home with the same attributes over time, was up by almost six per cent in Toronto, suggesting that market conditions for low-rise homes remain quite tight despite a changing mix of sales," added Mercer.

The Toronto board continues to point fingers at Finance Minister Jim Flaherty and tighter mortgage rules he introduced in summer. Shortening of amortization lengths from 30 to 25 years reduced the ability of some consumers to borrow.

"Stricter mortgage lending guidelines, including a reduced maximum amortization period and a purchase price ceiling of one-million dollars for government insured mortgages, have prompted some buyers to move to the sidelines. This situation has been exacerbated in the City of Toronto because the additional up front land transfer tax takes money away from buyers that otherwise could be used for a larger down payment."
--Ann Hannah

Jason Mercer, believes that some parts of the market have been more affected than others. "The moderate annual rate of price growth compared to previous months was largely due to a different mix in detached home sales this year compared to last, particularly in the City of Toronto. The share of detached homes that sold for over one-million dollars was down substantially, which influenced the overall average price," he said.

"Moderating home sales are expected to slow the pace of residential building, particularly in the overbuilt condo markets in Vancouver and Toronto," Bank of Nova Scotia economists said in a new forecast. More information and detailed forecast will be available in upcoming week.