Every homeowner understands the struggle of having to compromise. No home is going to possess every single amenity you hoped for, and no property is ever going to be completely ideal.

Nor can you expect, in an increasingly crowded and overpopulated city like Toronto, to live in relative isolation from your neighbours. The vast majority of residents in the GTA own homes that are situated quite close to neighbouring properties. There is no choice but to deal with the potential issues that arise when you live in close proximity to other individuals and families. 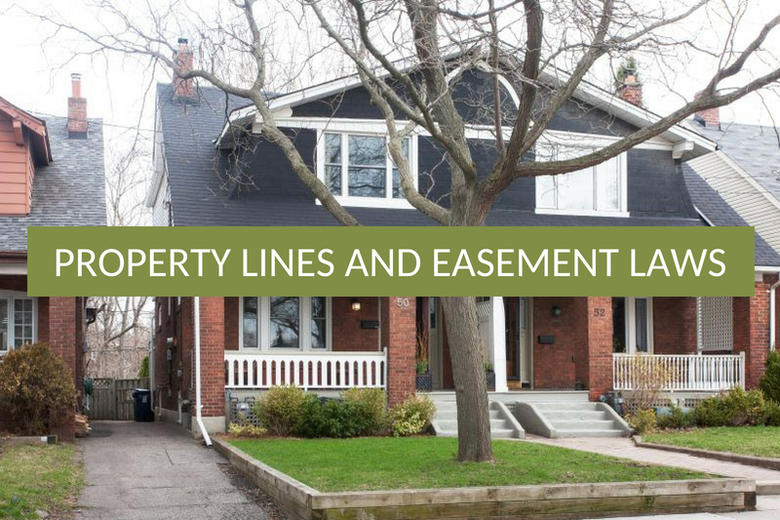 The reason for many of these neighbourly conflicts is confusion over property lines. Homeowners tend to be in the dark about property laws, and it’s understandable, considering the fact that dividing lines between properties are by definition invisible and the rules surrounding them tend to be unspoken. The right to cross or use a neighbouring property is known as an "easement," and laws relating to property divisions are known as easement laws.

Easement laws are in place in order to allow every homeowner the utmost privacy, independence, and security. These laws might not be commonly known or talked about, but they exist to ensure that every property owner’s private land is protected. Your property is yours—and it’s illegal for your neighbours to even plant a few seeds on your side of the line. On the other hand, if your neighbour refuses to weed their front yard or allows their property to become an eyesore, you have no legal right to criticize them. 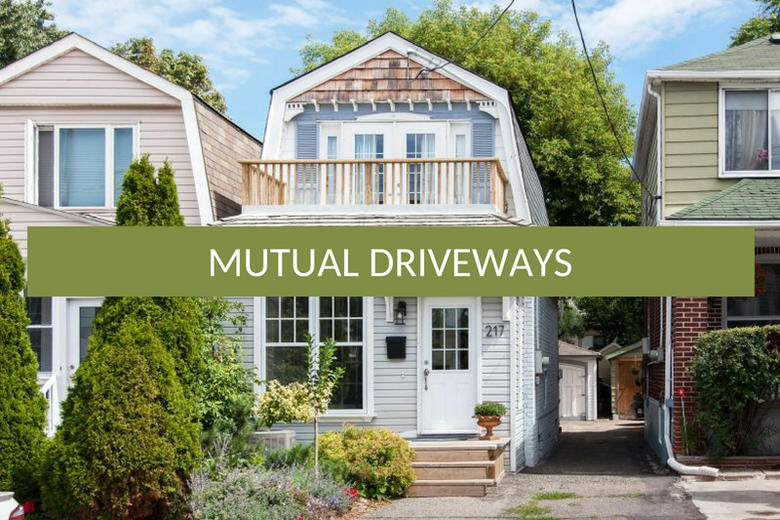 According to Julie Kinnear, Sales Representative at The Julie Kinnear Team, the term "shared driveways" is not commonly used. Instead, driveways that are shared by multiple homeowners are known as mutual driveways. As you might have guessed, mutual driveways can be a challenge, particularly during the Toronto winters, when neighbours might slack off on shovelling and refuse to keep up with their end of the bargain. Many people can relate to the experience of waking up for work, heading outside, and finding their driveway still buried in snow. Other common annoyances might involve a neighbour who constantly blocks the driveway or leaves a bike outside.

But what can you actually do about a problematic neighbour who disrespects your legal right to privacy? It can be difficult to make a case when you can't even be certain that your neighbour is doing anything wrong. But while property lines are invisible, Kinnear confirms that neighbouring houses with a mutual driveway will typically have the property line split right down the middle. As such, your neighbour has an easement over your half, and you have an easement over theirs. 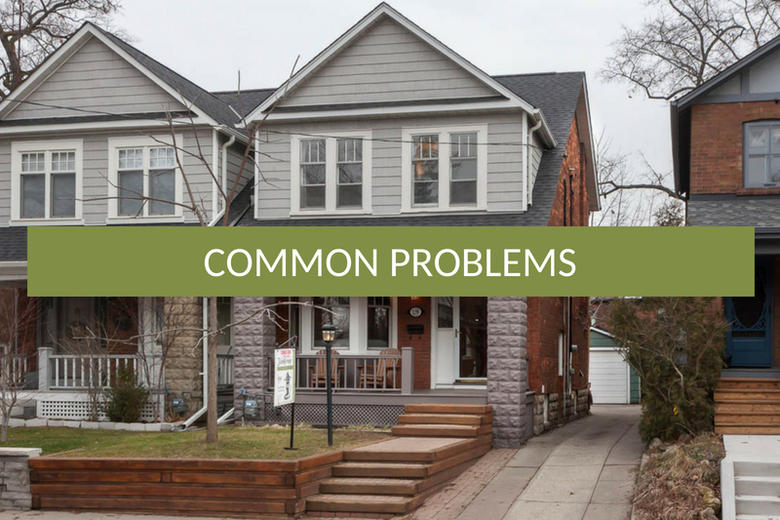 Mutual driveway disputes are the second-most common reason for neighbours suing each other. However, Kinnear says that she has found that many homeowners are pleased with their mutual driveway. After all, if a driveway is large enough to accommodate two vehicles and you and your neighbour both have easy access to the street or garage, it’s unlikely that you’ll find the situation too problematic:

If you have a large enough driveway, and you have a neighbour that you get along with, issues are unlikely to arise.

However, if you have a neighbour who can’t seem to figure out how to park straight, you might find yourself trying to stealthily manoeuver around another vehicle every time you have to pull out of the driveway, leading to potentially dangerous situations. Other neighbours might be careless about leaving personal items on the drive.

Another case is when someone widens their driveway. This is typically done by redoing the walkway so that it encroaches on the driveway space, and isn't technically illegal if easement laws are reviewed. The problems might come in when the neighbours park in the widened space when they aren't supposed to.

Passive-aggressive homeowners might be inclined to build fences or other forms of blockades to prevent neighbours from getting too close to their side of the driveway. Careless neighbours might leave their bikes or children’s toys outside, causing unnecessary obstacles to get around. In all of these circumstances, neighbours are not respecting easement laws.

Kinnear also warns that potential home buyers are often tricked by misleading listings, which state that the home has a mutual drive but is actually far too small for two cars to safely drive down. And since there is no legal limit to the width of the drive, she adds:

The best advice to give to somebody is to try it before they buy it. Literally, take your car and drive it down. Don't just measure it. Literally, drive it. 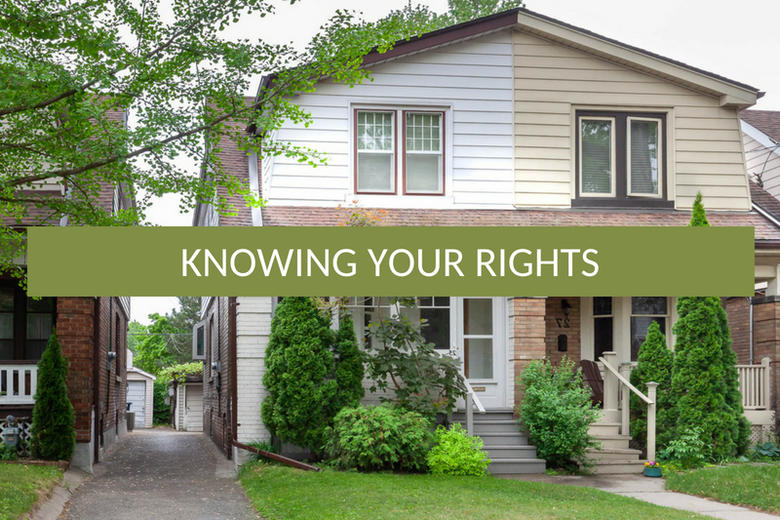 It's advisable to arm yourself with as much knowledge as possible upfront, and the way to do this, according to Kinnear, is to invest in an up-to-date survey. The cost of a land survey in Toronto is around $2000, and calling 311 is the only way to reach a representative from the city who can provide you with assistance should an issue arise. Kinnear warns that even though there is "technically no such thing as squatter's rights," the law could rule in favour of your neighbour if they occupy space in a certain manner for a long enough period of time.

In the case of an immediate issue, you can probably assert your rights on your own by moving an offending object or asking your neighbour to keep your side of the drive clear. Neighbours are expected by law to respect the easement laws and never block the driveway, even temporarily. If an obstacle such as a basketball hoop, a bike, or a skateboard prevents you from safely pulling out of the driveway, you are within their rights to gently remove the object.

Of course, there is some grey area relating to how the individual chooses to handle this situation. In the best case scenario, your neighbour will simply explain that they couldn’t safely get around the item and moved it. However, they are expected to deal with the issue reasonably and respectfully. You are well within your rights to pursue legal action if a neighbour becomes aggressive or confrontational.

On the positive side, Kinnear adds:

People do use mutual driveways as private drives and they do create a gentleman’s agreement between them where, for example, 'You use it on Monday to Friday, and I use it on the weekends.' Or other agreements might be monthly or seasonal. Lots of people do lots of unique things with it. I’ve had lots of clients who have bought property where it’s worked out. 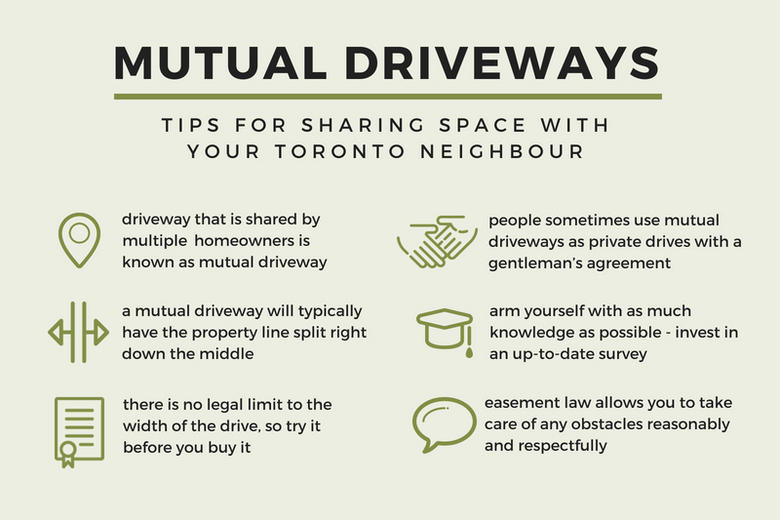 8 comments on “Mutual Driveways: Sharing Space With Your Toronto Neighbour”