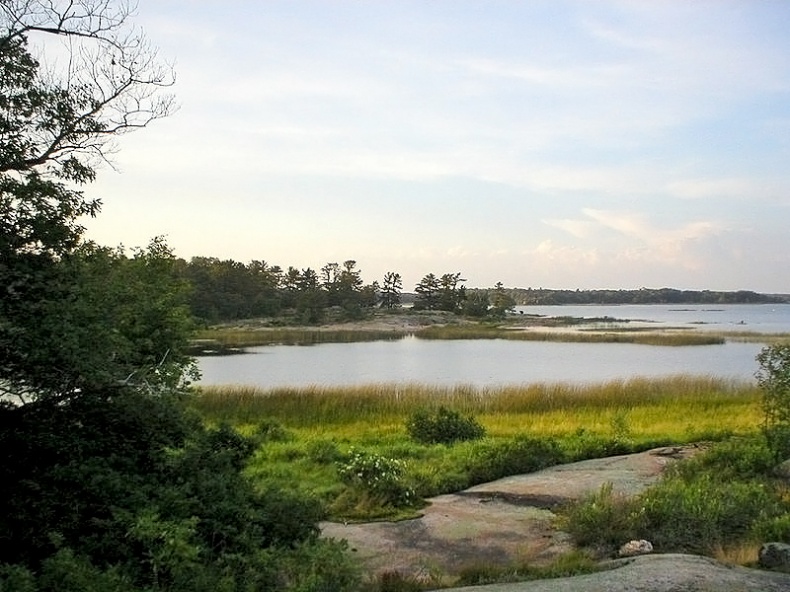 Georgian Bay Islands National Park, made up of picturesque islands and a small mainland area, was founded in 1929 when petitions from locals persuaded the government to establish the national park and preserve its pristine beauty. The complete area of the park is over 14 square kilometres and contains 59 islands and islets. All islands are open to the public; however, just two of them, Beausoleil and Bone, offer services such as docking, outhouses, and picnic tables. The national park is divided into two sections: one group of the islands lies in the southern part of Georgian Bay, whereas the other, connected to Lake Huron by the Main Channel, is in the western part. The largest island is Beausoleil Island (4 square miles), well-known as home to the Chippewa First Nation. The park is open year round.

Rock faces and wide waters are the most distinctive feature of this national park sought after for its beauty. The park's islands host both northern and southern species of vegetation and animals. Breathtaking landscapes and views even drew several painters here, known as the Group of Seven, in the 1920s. Their paintings reflect the deep belief that the Canadian landscape is worthy of being painted, which was not so common at those times. Thanks to these remarkable paintings done in the characteristic style of bold brushstrokes, the natural beauty of the park has become a part of Canadian national identity and heritage.

How to Get There

Georgian Bay Islands National Park can be found just two hours north of Toronto, taking Highway 400 from Toronto to Muskoka Road 5, Exit 156, then turning left to Honey Harbour. Access to the islands is by private boat or water taxis (such as Georgian Bay Water Services). The welcome centre can be found in Port Severn, the park's main office in Midland.

What to Do During the Summer Season 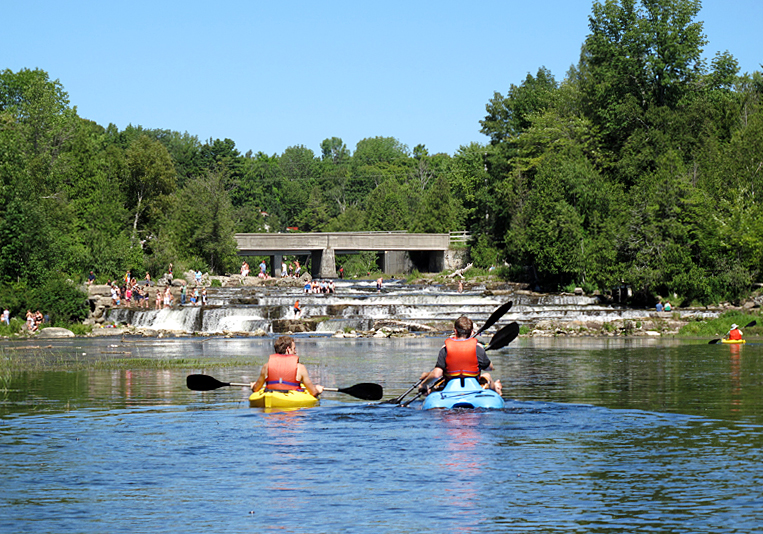 The park provides an extensive offer of outdoor activities for its visitors but kayakers are undoubtedly the big winners here since Georgian Bay is Canada's top freshwater paddling destination. You can either launch to several local campsites or try more challenging, longer excursions along the shoreline. Beausoleil Island attracts most of the visitors of the park interested in kayaking.

The park is a boaters' paradise and once you're there, you can't help but agree that it's a spectacular area for kayaking with endless channels, bays, and inlets to explore. You can kayak between the islands or to Beausoleil and continue discovering the area. The park waters have heavy boat traffic and although much of the area is protected, sudden storms can occur, so make sure to avoid the unsheltered back of the island unless you're a very experienced kayaker. Hiring a guide to help you explore the park is highly recommended if you're not at least an upper intermediate kayaker. 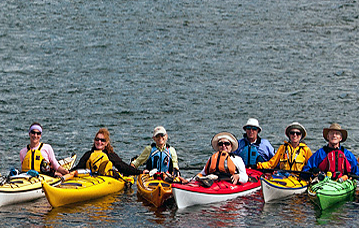 White Squall offers a full range of guided paddling through the islands of Georgian Bay. Their offer includes activities for kids and families and even school trips. Various boat rentals are available with prices starting at $20 per day.

You can also canoe in the park; however, you might find a skirted kayak a better option in these waters, which are not really recommended for canoeing. You'll find canoe camping at any of the 15 camping sites on the island. You can also rent one from marinas near Honey Harbour.

This marina is located directly in Honey Harbour, close to Beausoleil Island. The marina offers dockage and boat maintenance services. Their brand new dock has been fully serviced since May 2012.

Paragon Marina offers dockage for 215 boats from 16 to 56 feet, an office, a chandlery building, parking, a driveway, and an electronic gate. This is a full serviced marina located in the heart of Honey Harbour.

Village Marina is a family business operated since 1968 and located in a sheltered inlet of Honey Harbour. They offer a wide variety of service all year round, including marine mechanical services, store, dockage, and much more. 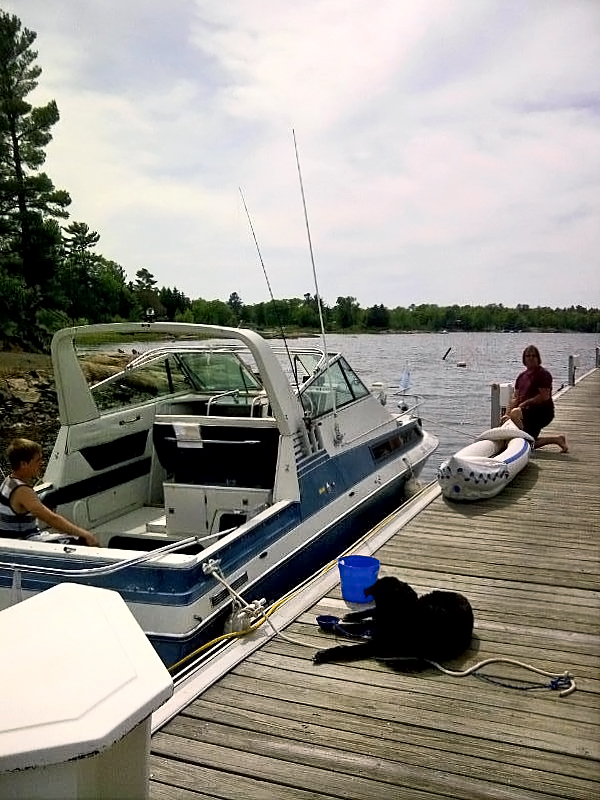 Located outside of Honey Harbour on the southern end of Georgian Bay, and noted for having the best fresh water boating in the world, this marina offers a sheltered and intimate dock setting. Their offer includes a fuel dock, docks able to accomodate vessels up to 100 feet, a main building with a variety of services (even a sauna is available) and beach decks.

Georgian Bay has splendid opportunities for water sports and breathtaking sceneries, but it's also a huge mass of water, prone to fogs and very cold with storms often coming suddenly in a minute. Therefore it's recommended to check the weather conditions before you go and to contact the park for any additional information on skill requirements, routes, and conditions. Remember: safety is a priority.

A wonderful trail system with numerous interconnections is available on Beausoleil Island. You can choose from many routes and camping spots, and even take a combination of trails and hike around the island. Beausoleil is the park's main island and its 11 hiking trails mean great opportunities to enjoy Beausoleil's lightly wooden areas with rocky shores and sandy beaches. Camp areas are located along the way, yet not in the back side of the island, where the trails are most secluded. 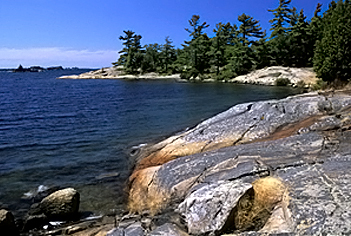 For an extended hiking stay, head south from Cedar Springs campground to Beausoleil Point campsite along the Huron Trail. The next day, take the Georgian Trail along the western coast and connect either with the Rockview or Massasauga Trail and head for some of the numerous campsites in the norther part of the park. From there, you can easily return to Cedar Springs by following the Huron Trail and possibly taking the Treasure Trail for another route back. But there are many other possibilities for hiking. Some of the trails are also suitable for easy mountain biking. Bikes are allowed on the Huron Trail and the Christian Trail.

Cambrian Trail is a two-kilometre, easy walk in the northern part of Beausoleil Island, which offers the perfect opportunity for exploring the Canadian Shield. The trail is a side trail of the Fairy Trail.

Fairy Trail runs 2.5 kilometres through coulees and hills around Goblin and Fairy Lakes. You can reach this trail of easy to intermediate level from the Rockview Trail in the north of the island.

Rockview Trail is short and easy trail that connects the Fairy and Dossyonshing Trails to the Huron. This trail overlooks Long Bay and can be found in the north of Beausoleil Island too.

Dossyonshing Trail is more than two-kilometre, easy walk that provides the perfect opportunity to enjoy the beautiful landscape where marshes and ponds contrast with hardwood forests. You can reach this trail from the Huron, taking the Rockview Trail, again in the northern end of Beausoleil Island.

Massasauga Trail denotes an easy trail of two kilometres named after the endangered Massasauga Rattlesnake sheltered together with other reptiles and amphibians in this area.

Portage Trail is a short trail going through the wetlands area. Its name is derived from the original use of the location by the first nations peoples and early settlers.

Huron Trail, eight kilometres long, spreads through the transition zone between the lowlands and the Canadian Shield country. You can explore the eastern side of the big island and connect from there with some other trails providing access to several backcountry campsites. If you're a bird watcher, this trail is a must-take.

Georgian Trail follows along a shoreline in a five-kilometre long stretch, taking you over the stone and sandy beaches of the west side of Beausoleil Island as well as through the outcroppings of the Canadian Shield. The trail is a good choice on a sunny afternoon. Connecting to the Huron at the southern tip and northern part of the island, it can be reached from the Christian Trail.

Treasure Trail with its name derived from local lore of treasure buried there, is an easy, almost four-kilometre trail following a ridge out to Treasure Bay. You can reach this trail from the campground of Cedar Springs in the south of Beausoleil Island.

Firetower Trail is the right choice for those who are looking for excellent views. After some climbing, you'll be rewarded with gorgeous scenery of Papoose Bay. The trail can be reached halfway along the Christian Trail.

Christian Trail bisects the lower end of the island and connects Cedar Springs campground to the group camping site at Christian Beach on the west coast. It's 1.5 kilometres long and easy to intermediate level. 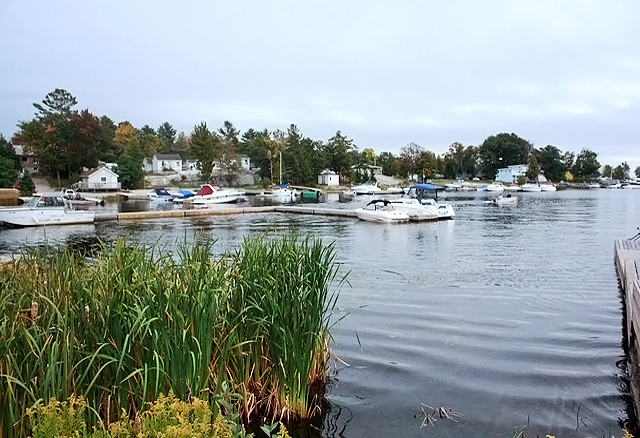 Honey Harbour by me tm

A busy little port in the summer season, Honey Harbour can be found on the eastern shores of Georgian Bay, off Highway 400. It offers water access for cruisers, outdoor adventures, and cottagers. Beausoleil Island is just a few minutes' drive in a water taxi or private boat. Honey Harbour is also an ideal destination for a weekend of cottaging while relaxing on Georgian Bay.

The island is eight kilometres long and the largest of the islands of the park. It offers camping, docking, heritage education programs, and hiking trails. Beausoleil Island hosts the seldom seen Eastern Massasauga rattlesnake, the only Ontario snake whose venom is dangerous to humans. Island's bedrock and wetland environment is also rich in many other species of amphibians, turtles, and snakes. Some artifacts not younger than 7,000 years have been found there. The remains of ancient tools and pottery show that the island was probably used as a summer camp by early hunting and gathering cultures. Descendants of the Chippewas of Lake Huron and Lake Simcoe came here in 1842. Because the soil on the island was unsuitable for cultivation, they settled on the Christian Islands, where a reserve was formed in the 1850s.

All of the camping is on Beausoleil Island, accessible by private boat or water taxi. Fifteen campgrounds with 192 sites are available, while two group sites (Cedar Springs and Christian Beach) must be reserved in advance. The main campground with 87 sites is located in Cedar Springs. Toilets and showers are available here. Other camping areas along the coast offer just basic conditions for camping.

If you're not really keen on the idea of sleeping in a tent then perhaps a cabin on Beausoleil Island is the right choice for you. You can find two cabin sites on the island, at both Cedar Spring and Christian Beach. These new cabins are fully equipped, guaranteeing the comfort of a roof over your head and a bed beneath.