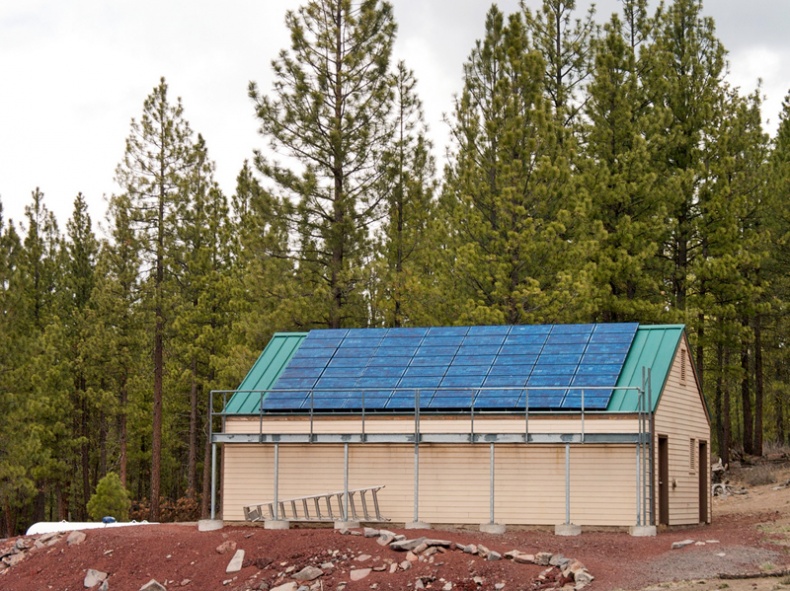 Off the grid by Sam Beebe

Living off the grid is becoming more and more popular, especially here in Ontario. We've become an unofficial Mecca of off-the-grid living. More and more people come here to purchase a piece of land and start a new life, one that most of the people can't imagine themselves following even in their wildest dreams. (I know I'm definitely not cut out for this!)

The decision to go off the grid is one of the most serious a person can make. It means that you cut yourself off any electrical, heating, sewer, water supply, or any other public utility services and you provide all these necessities for yourself, on your own. This article will show you that although it might seem very difficult, it is definitely doable — even in a seemingly impossible environment like Canada. (Everyone who experienced the winter in remote regions of Ontario, or any other region of Canada for that matter, will be raising their eyebrows.) We'll bring you the perspective of several people from Ontario and other parts of the world who were successful in freeing themselves from commercial utility services providers and who are living on their own in the truest sense of the word.

One of our readers, David, is selling a custom off-the-grid house. It's really cool! You can see his listing HERE.

Electricity: The Mother of All grids

Murray and Nan from Ontario know a thing or two about going off the electrical grid. Rule number one: when you don't have to, don't use it. When you provide electricity for yourself, you start looking at it from a very different perspective. Nan and Murray described their arrangement to Professor and Canada Research Chair Phillip Vannini. Instead of using the AC lighting, they use their DC-based LED lights — the advantage being high efficiency and lifespan. At the same time, these lights only work as rays, so they don't have the all-room covering effect we're used to. Nan and Murray also have a back-up propane generator; however, they merely power it up in the most critical moments, as they say: "Some years we manage to never turn it on at all." They have no curtains anywhere in their house, leaving them with ample direct sunlight. The water distribution system is also electricity-free, since they operate it manually. It's amazing how inventive you can become when your belief in making a stand is as strong as Nan's and Murray's. Even their grain grinder (yes, they do make their own flour!) is attached to a stationary bicycle. 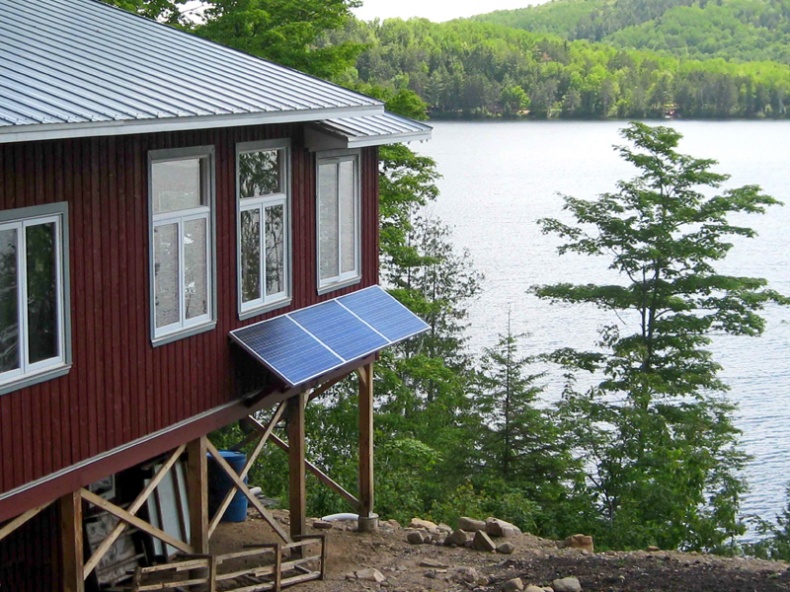 It may seem that the lifestyle described so far must be very uncomfortable, but think about it: so far, this couple doesn't really do anything we wouldn't in the city. The only difference is that when they work out, they make their own food and pump water as well. Of course they can't power up the most powerful kitchen appliances, but that is not comfort; that's a luxury we've grown accustomed to. As Murray says in the short documentary about their life:

"Most people want control over their lives, more than we can provide for ourselves, would allow us some control. We wanted to be as self-sufficient as we could."

We've asked Professor and Canada Research Chair Phillip Vannini from the School of Communication & Culture at Royal Roads University about his opinion on the future of the off-grid movement (if you can call it a movement), mainly if he thinks that there's potential for it to grow huge. Currently it seems just like a few people, scarcely more than tens of them in one region. Does he think that we're able to turn back to simpler, off-grid life, or have we gone too far?

The question you ask is a good one. Currently off-grid living is not a movement. It's just a few, scattered, brave people. The future? I'm not one for future predictions, as I tend to find the present more interesting than the past or the future, but I do believe that a few key forces are unfolding to make off-grid living a bit more common in the future. But more than OFF-grid living, actually, grid-TIED living will become popular. Off-grid living requires skills, knowledge, abilities, and competencies, as well as a great deal of adaptation that will always discourage some people from disconnecting. But installing solar panels, wind turbines, and solar hot water collectors on a home and feeding back excess energy to the grid, and drawing electricity from the grid when needed, will continue to increase in popularity as long as costs of these technologies go down and as long as governments will become alert to the benefits of doing so. All social and environmental indicators point to the need to diversify energy resources in the future and invest more in local and renewable resources. So I see a continued growth in the reliance on renewables, definitely. The key is collective need. So far it's still just too easy to waste power that is kept at unrealistic prices by unfair subsidies. In the future we will feel, inevitably, the necessity to make changes.

A compelling argument for going off the power grid is made with every power outage in the region. It makes a lot of people realize how vulnerable we are in the face of losing our access to power. Frank Tettemer and Cheryl Keetch living near Killaloe, didn't have enough money to get connected to the grid when they moved in to their new house and started to buy solar panels instead. Later on, they installed a 24-foot pole with a windmill on the top in the garden of their house. Fifteen years later, they're still happily living without being connected to the grid. The windmill is situated to generate energy from west wind — the one that prevails in the area. The 1,000-watt windmill typically generates half the amount. Nearly thirty solar panels positioned in the south side of the home generate on average over 1,800 watts of power. All of the power generated is transferred into the battery room and meters help the family to determine how much power they have left. They also have a back-up gas generator, but Ms. Keetch says that even with the coldest winter over the years, the generator switches on only once or twice, consuming around $20 worth of gas. ($20; can you imagine?) 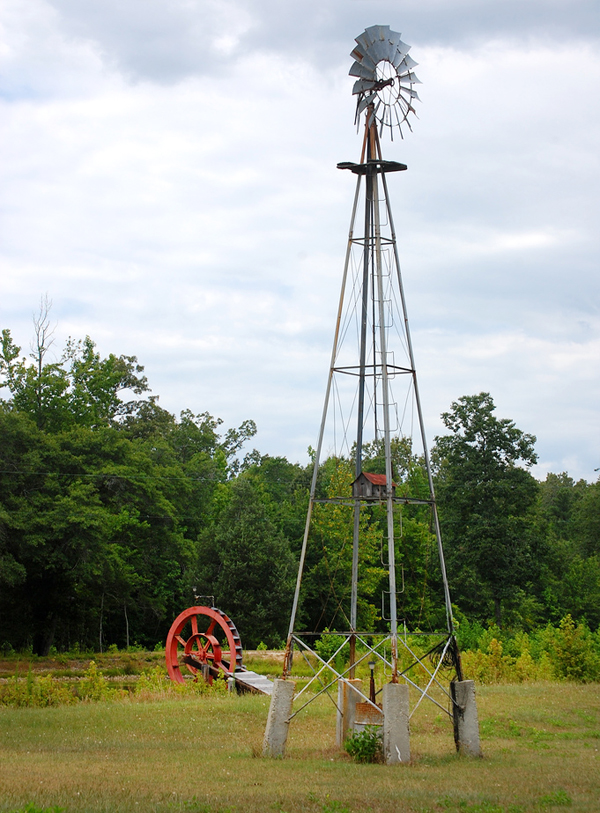 Murray and Becky Monk are one of the few examples of how to combine life in the breathtaking wilderness of North-Western Ontario and still enjoy all the conveniences of modern life. With their full satellite Internet, TV, and phone access, you can hardly believe that their closest neighbours are the fish in the nearby lake. It's amazing how efficient the solar power coming from only six rotating solar panels can be. Becky uses Wi-Fi for her laptop, so she can use it all around the house, and their phone, with voice-over-IP service, runs through their satellites as well. The monthly bills for VOIP are usually much lower than the bills we pay for our standard phones.

Leonard, It's Raining Again – Good, I Was Thirsty…

Leonard is the owner of one of the most innovative, complex renewable energy systems in Canada. He provided countless households with the solar panels for their homes, but he also provides his family with other very important off-grid patents. The one we picked to present you with is his water system. Obviously, if you want off the grid, you need to think about two important elements: the source of water and the distribution system. The distribution system in Leonard's house starts with a one-third-horse-power pump that pulls water from its initial source upward. An ultra-violet sterilizer cleans the water and is DC-based, using less power than other units. The preheat tank is powered by a solar thermal heating array (panels). Small pumps push warmed water through the floors for heating. The four small pumps are 12-volt DC circulation pumps, each drawing just 3.1 watts compared to the 40-to-60-watt AC pumps used normally. The whole system only uses as much as a 60-watt light bulb, which is uncommonly low. 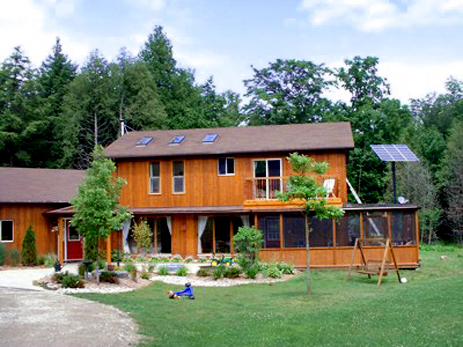 Off the grid Leonard Allen house

There are more ways you can harvest water, but the most common and convenient are well and rain-collecting systems. The cost of a private well ranges from $3,000 to $15,000, depending on how deep you need to go, and what kind of rocks lay beneath the upper soil level. It is advisable to make just a general structural scan before you start full-on drilling. The deeper the well, the more likely you'll find clean water. Install a filter for better-tasting water. The rain-water collection systems are also very efficient for collecting water. Usually, the water is collected in a big cistern at the end of the whole system. The water from your rain gutters is transferred into the cistern and then pumped back into your home as you need it. If your cistern is above ground and higher than your taps, you can use the weight of the water as pressure to get it into your home.

Concerning heating, Krzystof Lis, M.Sc. in mechanical sciences and off-grid enthusiast full of brilliant ideas, says that there shouldn't even be discussion about this. The best choice is underfloor heating system. It's far more effective than conventional radiators or any other means of heating. You lose a lot less of the heating power than with the usual means of heating. For smaller households, you can also build a fireplace, and a heat distribution system is also an option, but there will always be the problem of keeping the fire on at all times — especially in winter.

The ideal way to get an off-grid sewer line up and running is to install a septic system. A septic tank, the large metal tank buried underground on your property, collects all the waste your house produces. The bacteria planted there break down the waste, causing it to separate into bottom sludge, middle liquid, and an upper scum layer. As new waste flows in, the liquid in the tank flows out into a series of buried, perforated pipes that release the water over distance into a drain field. The soil acts as a biological filter, keeping the harmful bacteria buried beneath the ground until it's eventually absorbed as nutrients. The tank should be emptied and serviced by a professional once a year.

Daryl Hannah on being off grid

Probably the most famous celebrity that went full-assault on the off-grid lifestyle is Daryl Hannah, back in the days known as the Blonde Goddess of Hollywood, and now referred to as the Green Goddess of the Rocky Mountains. Vegetarian since 11, and as she says, very interested in the environment since an early age, Daryl became the icon of off-grid enthusiasts, widely promoting this way of life.

My house in the Rockies was an old stagecoach stop. It's pretty small, and I restored and put solar power in, and we have spring water because there's a spring next to it. It basically all runs on solar, and we have a back-up bio-diesel generator.