The skyline of Toronto is in constant flux. New construction cranes seem to pop up every day. They bring a lot of things with them—employment, homes, offices, economic stimulation but the thing they remind us of the most is change. 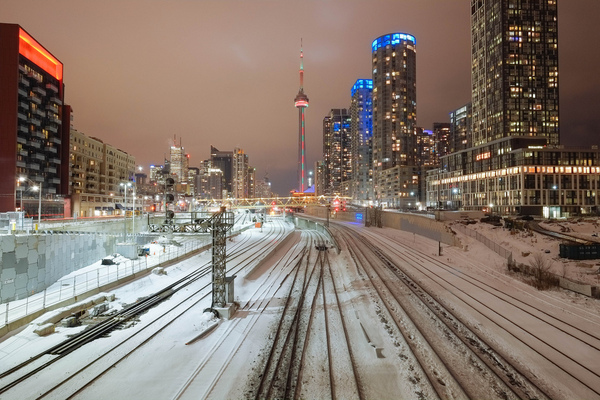 Winter in Toronto by Nick Harris

New government restrictions have changed how Canadians apply for and receive approval for mortgages. The change has impacted first time home buyers the most.

5% is the minimum downpayment required for buying a property in Toronto, with the requirement of buying mortgage insurance for it. Under the new regulations as of Feb 15, 2016, for a property purchase more than $500,000, the minimum down has increased. Essentially for every $100k, buyers have to put about $10,000 more down, so it is technically more than 5%.

Another change in the past 10 years has been that anything under a 20% downpayment requires insurance, vs. previously a "conventional mortgage" was 25% down. Also homes over $1,000,000 have been disqualified from mortgage insurance altogther, so buyers must put at least 20% down for those properties. 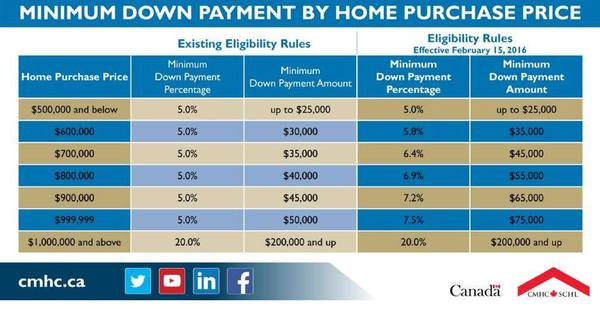 The Amortization rate for mortgages has also been modified. Amortization is the period of time you have to pay off your mortgage. Not very long ago, homeowners could pay off their homes in as much as 40 years. Recently, the government changed the amortization period so that on any down payments less than 20%, the maximum period to pay off the loan is 25 years.

Julie Kinnear is a sales representative and leader of The Julie Kinnear Team of Real Estate Consultants with Keller Williams Neighbourhood Realty. She says the change may make it harder for first time buyers, but it helps protect everybody.

"The problem is that in the last five years, prices have gone up way faster than inflation, and the banks keep clawing the amortization rate back. They’re much more comfortable around the 25-year mark, because then it's a more realistic amount for a buyer to be paying, and it also means they aren’t really overextending themselves and never able to pay off the house," she says.

"A 40-year amortization means you’re technically not paying for your house for 40 years. I personally feel that it is setting up the buyers to be in debt for the bulk of their lives and irresponsible on the bank’s part, so now buyers are being protected from making that mistake."

Kinnear recognizes that the changes have been hard for people trying to break into the housing market. She says it may mean involving parents as guarantors or reducing your expenditures and living within your means. But it’s not just first-time homeowners she’s seen affected by the new rules.

Governments of all stripes are constantly looking for new revenue streams. New taxes and regulations are just one way that governments can help fill the public purse. This is most prevalent in Toronto with Land Transfer Tax.

"I really, truly believe that the real estate market is a great stimulus for the economy in Canada and in Toronto,"

"I feel like they're penalizing buyers who are already stimulating the economy by buying and keeping so many professions in business, including realtors, lawyers, photographers, internet/print ads, printers, contractors, painters, movers, and everybody else associated to the business. There’s over 40 different industries involved. It includes all the Home Depots of the world, every sort of industry that’s affected by people buying and selling houses. And then on top of that, the Toronto buyers have to pay this massive extra tax."

Kinnear says the price can be restrictive to many buyers. She believes it unfairly targets people buying or selling property in the city and should be more fairly distributed among homeowners.

"Property taxes are low in Toronto,"

"They’re much lower than in Mississauga, for example, or even the outlying areas like Whitby and Ajax. So that’s where the difference is. Mississauga doesn’t have the double land transfer tax but they do have higher property taxes. That seems more fair to me because then everybody’s sharing the burden. Everybody who owns homes."

In 2010, Ontario implemented the harmonized sales tax, which combined the previously existing PST and GST into one revenue stream. The resulting 13 per cent tax on goods and services has impacted Toronto’s real estate market as well.

"All sellers, when they’re using any services like realtors or lawyers, they’re all being taxed on that,"

"HST on real estate & lawyer fees, that’s a big hit for a seller." 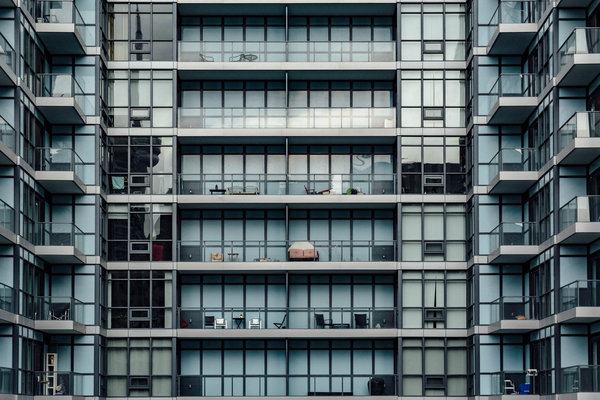 The 2008 housing crash in the United States sent ripples across the global economy and housing markets the world over. Toronto real estate was no different, though Kinnear says it weathered the storm better than a lot of other regions.

"I think a lot of people are pretty proud of Canada for not falling into the same NINJA [no income, no job and no assets] mortgage issues that the U.S. did," says Kinnear.

According to her, the news reports did scare people off briefly.

Everybody freaked out and paralyzed themselves for eight months.

The fears were short lived though, and Kinnear can remember the moment she saw things start to turn around.

"It’s very memorable to me because during Easter Weekend of that year [2009] I ended up selling 5 million dollars of real estate. In one weekend. That moment I was like ‘Wow, okay. Things are back. We’re good.’ There was a lot more confidence and it’s been rolling like crazy ever since."

The proliferation of the Internet has impacted every industry in the world.

"A long time ago they told us the Internet was going to kill our business, that realtors were never going to be needed again,"

Those fears simply weren’t realistic though, and according to Kinnear, Toronto has double the amount of realtors than before the Internet came along.

"When I started in the early '90s [the Internet] wasn’t a big deal, and there was maybe 25,000 realtors on the real estate board. And now there’s over 45,000 real estate agents in Toronto.

By and large, the Internet has made things easier for everyone: buyers, sellers and agents included. Access to information has changed how houses are sold.

"Buyers won’t even go look at the house if they see it on Google Street View and they don’t like that it’s next to a parking lot, or across the street from a commercial building, or the next door neighbour's house looks like it's falling apart...," says Kinnear.

Online technology allows interested buyers to check out a property before even setting foot on the doorstep. Kinnear says this has changed how realtors do business.

"For us it means that we can present a lot more information online, so they can see it all in one place. Pictures are much more important than ever, as well as floor plans and the history of the property," she says.

The proliferation of opinions has an impact on buyers opinions. Websites like The Mash allow random internet commentators to sway perspectives before people have even seen the property. A bad Yelp review can have a negative impact on the sale of a home. But no matter how much information is out there on the web, Kinnear says the role of real estate agents has never been more important.

"Real estate is still very much a people-person’s business. As much as the Internet’s given us the information, people need help."

The Internet and social media go hand-in-hand these days, and realtors are embracing new methods of communicating with their clients. Kinnear and her team use Facebook, Twitter and Instagram to help promote their listings. Kinnear says YouTube is massive for her team.

"It’s funny, social media is a big change that’s happened in the business. For example, in the middle of an offer, a buyer will come up to me and say ‘I watched your video of the property like eight times last night’ and they get very emotionally involved with video."

Social media hasn’t just impacted how agents interact with clients though. Kinnear says Facebook and Google Hangout groups have popped up to allow agents to share information. She says she’s also seen groups pop up in condo buildings to help guide new owners through the frequently murky waters that come from moving into a new building.

"When you’re closing a deal on a new condo, they create this Facebook group where they’re all commenting, and they’re teaching each other, and informing each other about the builder [condo developer] and telling each other what to expect," says Kinnear.

The popularity of various applications has drastically changed the way business is conducted in Toronto, according to Kinnear.

"The big one for all of us is the way we communicate with offers," says Kinnear.

"You can email them, you can electronically sign them now. That only came in last September. It’s a major plus. Now you can literally sign the offer from your phone and you can scan documents with your phone. That’s the best version of tech I like," says Kinnear.

She says she sees it as a move towards a paperless industry, but admits it still has room to improve.

"It hasn’t gone paperless, but I wish it would. It is definitely going that way."

The number of applications that help realtors in their day-to-day business seems to be continually on the rise. Kinnear says Dropbox and Google Docs are large parts of her team’s toolbox, but there are countless others.

"There’s just a lot of different little parts of our business. When I talk about real estate I’m not necessarily just talking about what a buyer or seller sees, but a lot of behind the scenes, like between agents."

The hip districts of a city seem to change yearly. Areas that used to be considered unsafe or uncool attract new buyers as time passes. Kinnear sees it as an issue of affordability. 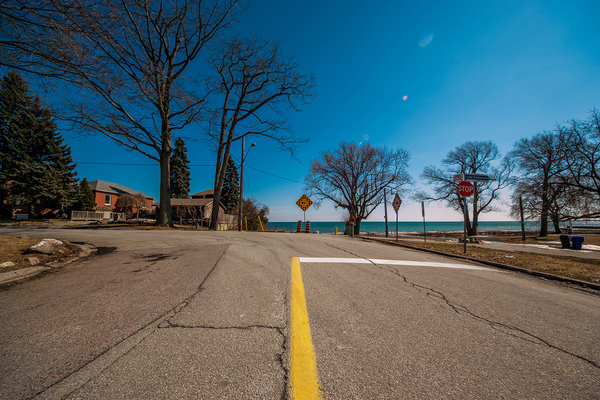 Kinnear points to areas like Long Branch and Mimico as up and coming neighbourhoods in the West.

"Mimico in Toronto has become hugely popular with younger families,"

In the east end the steady popularity of Leslieville has raised interest in the surrounding areas.

"Main and Danforth used to be a bit scary, with many unattractive apartment buildings and now we sell to plenty of young families in that area,"

"All those little post-war houses are all renovated. Again, it’s because it was affordable. Another plus is that it's on the subway line. These are the reasons why the whole Danforth [has improved]."

West on Bloor, Bloordale is creating a buzz, while the Stockyards area around Runnymede and St. Clair is attracting new buyers.

Toronto’s neighbourhoods are constantly evolving and young buyers are looking not just for what’s cheap, but what could potentially be transformed.

As prices rise in one area, people like artists or chefs look for cheaper accommodations and a few years later others usually follow.

Kinnear sees the next big changes being technological.

Whatever is around the corner for Toronto real estate, people will always need houses to live in. Cranes continue to pop up in the city’s sky, bringing with them new places to work, sleep, eat and live and Toronto’s real estate agents will be there embracing the changes.