Forget Starbucks and Tim Hortons. These are the unique, quirky neighbourhood spots that sprout out of the Roncesvalles area like mushrooms on a log.

Cheerful, caffeinated mushrooms. I visited three of the better known ones one week in April, and this is what I found.

The first stop on my coffee crawl (well, more like a hop, but never mind) was the Belljar Cafe,opened in 2009 by Lisa Kannakko and Geoffrey McPeek. This was the artsy spot on our list; McPeek has a musical background, and Kannakko has a photography blog. 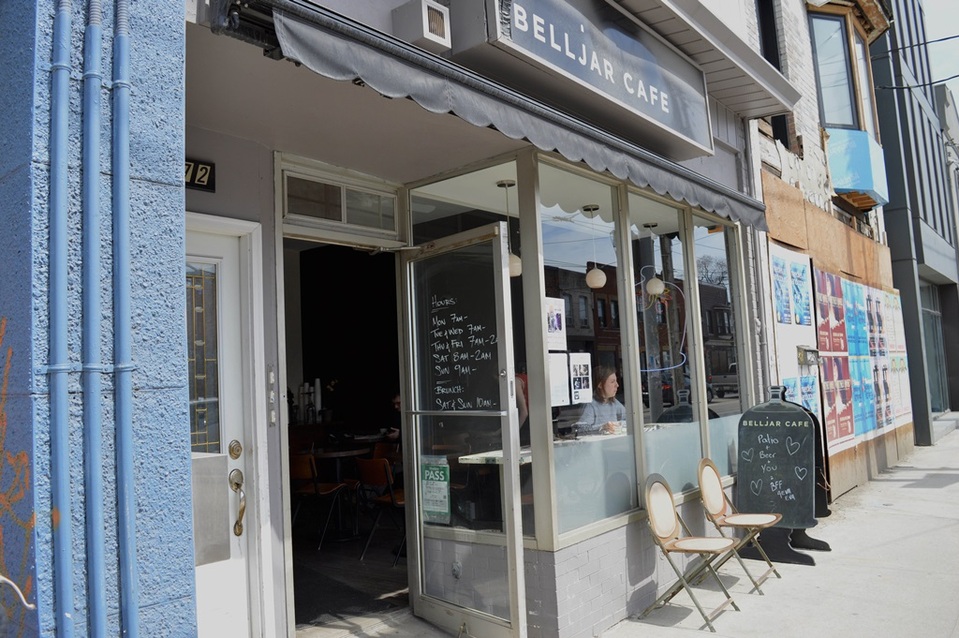 There are live musical performances at the Belljar, a few videos of which can be found on the cafe's website and on Kannakko's blog. There are also various visual art events, and the threat of 'open mic Tuesdays' starting up in May.

Aesthetically, the Belljar is a comfortable mix of nondescript and slightly fancy. Nice wood accents and elegant lamps on one hand, plainest of plain chairs and tables on the other. There's also a nice choice of darkness and light; you can people watch in the bright, windowed area up front, or lurk in the dark cozy part at the back (where most of the wood and lamps are, incidentally). 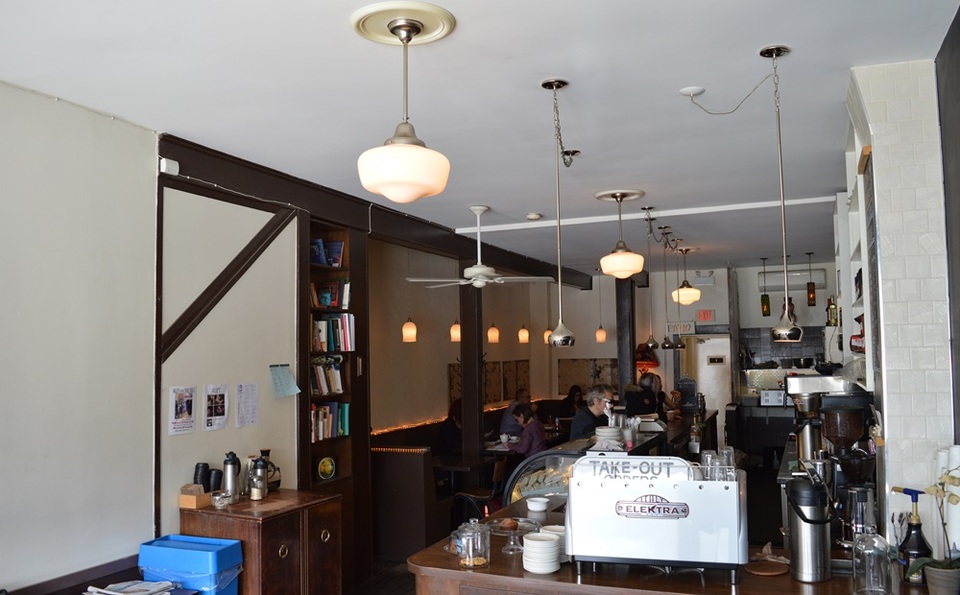 When we visited, the (non-live) music was far too loud and not to our taste, but the cappuccino (single, $3.75) was 'full-bodied' and 'nicely frothed'. All right, a word of explanation is needed. I don't drink coffee. With this in mind, I brought along with me an obliging relative (who wishes to remain anonymous) to be my official taster. She took this job seriously enough that she bothered to research the correct 'cupping' terms online—although I have my doubts about 'frothed'. 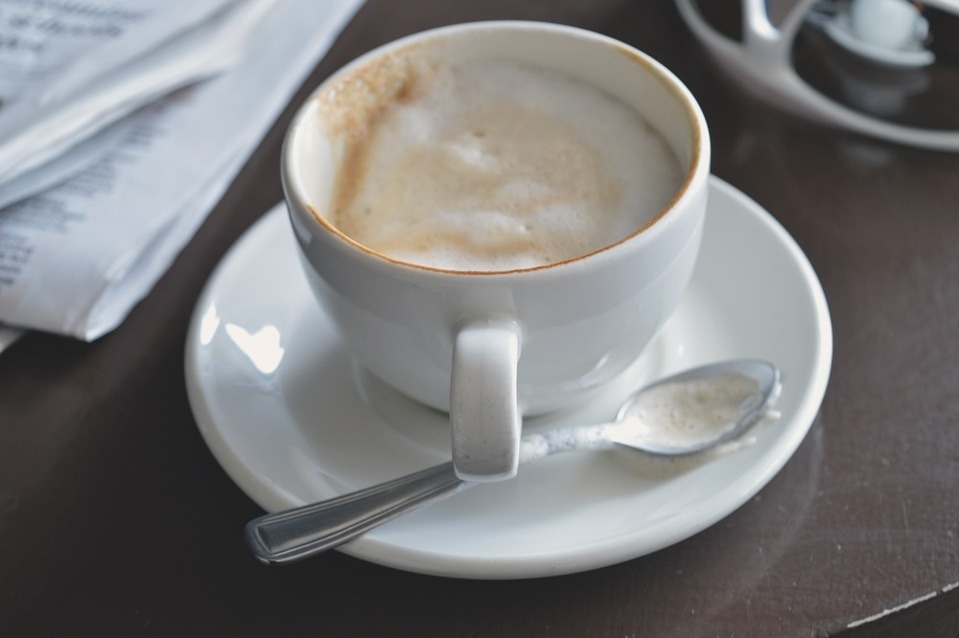 However you describe it, the coffee also got points for arriving in a real china cup—complete with spoon and saucer—which was visually pleasing, if nothing else.

After Belljar, the Cherry Bomb seemed very small, bright, and plain. Well, plain with a few nice quirks, such as a bicycle mounted on one wall like a hunting trophy (judging from the motorcycle pictures near the counter, 'the one that got away' might have had a Hell's Angel on it). 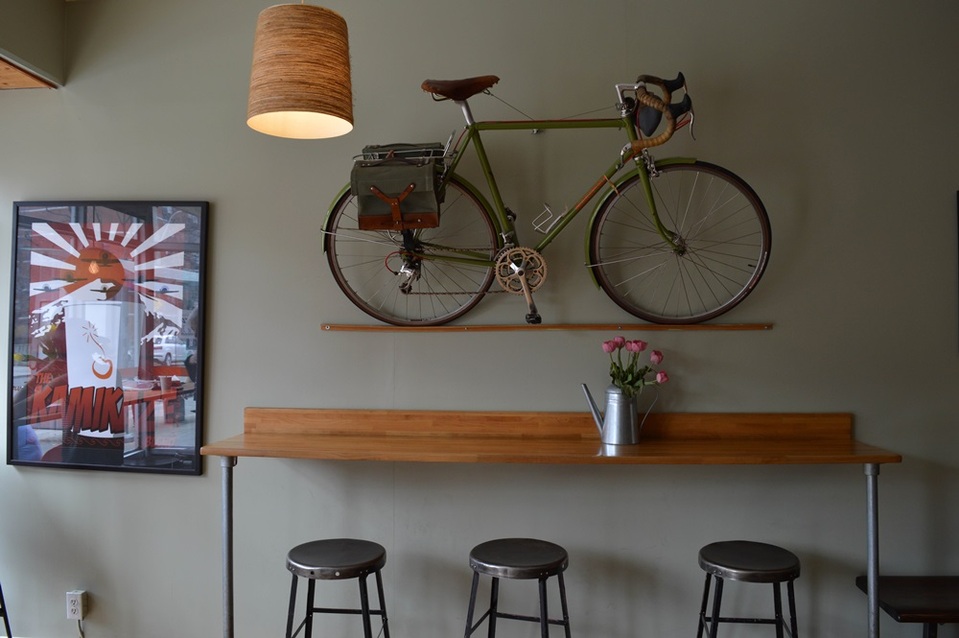 There wasn't a chair or table in the place, but there was a bench along one wall, and a handful of bar stools at a counter looking out the window. Cherry Bomb is known for its baked goods, but when we got there (admittedly, right after the lunch rush) the selection consisted of a few cookies and a tray of interesting doughy blobs lurking behind the cash. These turned out to be a selection of house-made croissants, which weren't even vaguely crescent-shaped, weren't flakey, buttery, layered, or particularly light, and which resembled overgrown tea-biscuits. The one I tried was essentially a decent, berry-laden cake with an extra knobbly exterior, but it was quite pleasant. My one regret is not getting a cheese and jalapeno 'croissant' to take home. I've learned now that these were in fact scones! 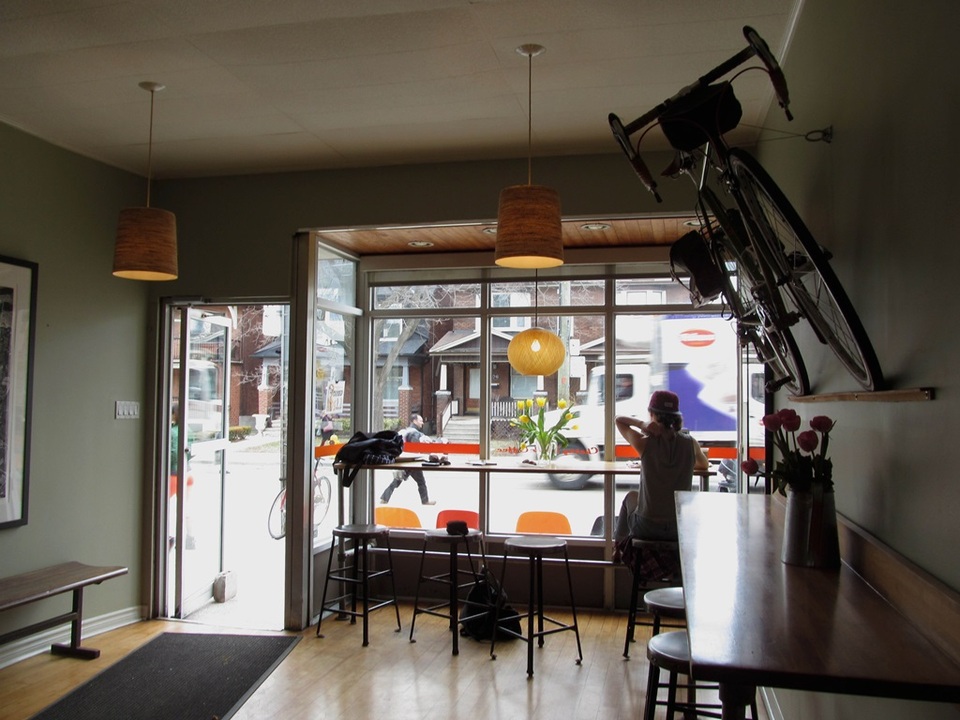 Whereas the Belljar had been staffed by two (very) young women, the more macho Cherry Bomb had two youngish men, one of whom seemed mildly mortified when I took out my camera to photograph my taster's latte. He assured us that he'd have done better if he'd known I was after pictures—and that he was the worst coffee artist in the joint.

Foam swirling aside, the latte itself ($3.25) was 'rich and full-bodied', with a 'robust flavour' and a 'nice proportion of froth'. 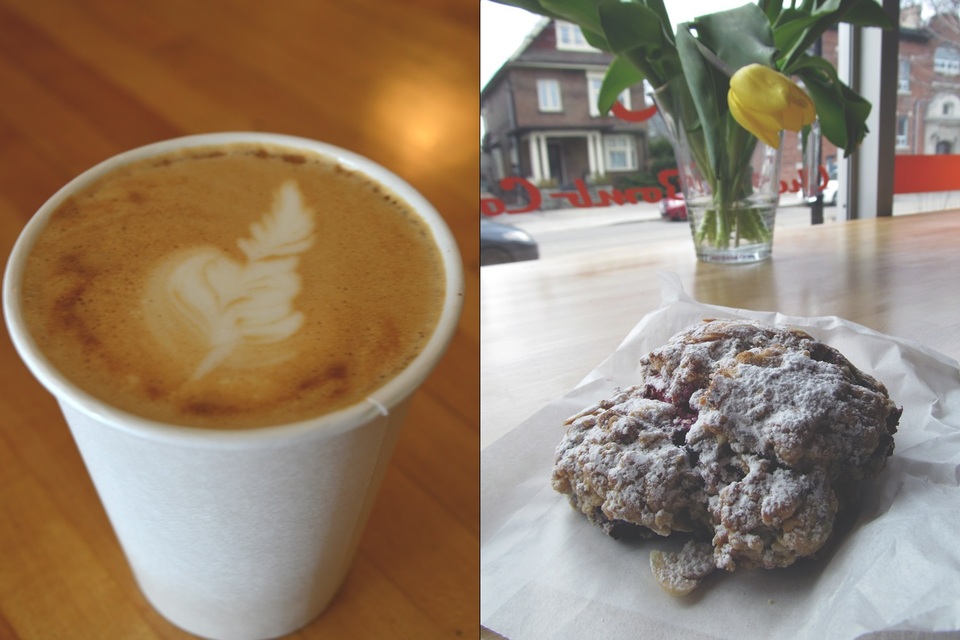 While Cherry Bomb is more a takeout place than a sit-and-savour, it has roasted and sold its own beans since 2012. You can order bags online; they come with names like Organic Kamikaze Espresso, Killer Bee Decaf, Jesus Elvis Espresso, and the comparatively low-key Spitfire Blend—named in honour of owner Sarah Ostwald's RAF pilot grandfather.

Coffee & All That Jazz

This was by far the most interesting and—dare I say it—charming place we visited. It managed to be distinctive and quirky, with some antique-looking flourishes, yet not at all fancy or intimidating. 'Homey' is a good, if vague, descriptor, which in this case encompasses a checkered floor, burgundy walls, lots of natural light, and a decent amount of seating (probably not as much as the Belljar in a pinch, but spaced more generously across three rooms). The fact that said seating consisted of annoying chairs (mine rocked from side-to-side) at tiny round tables only slightly detracted from my enjoyment. 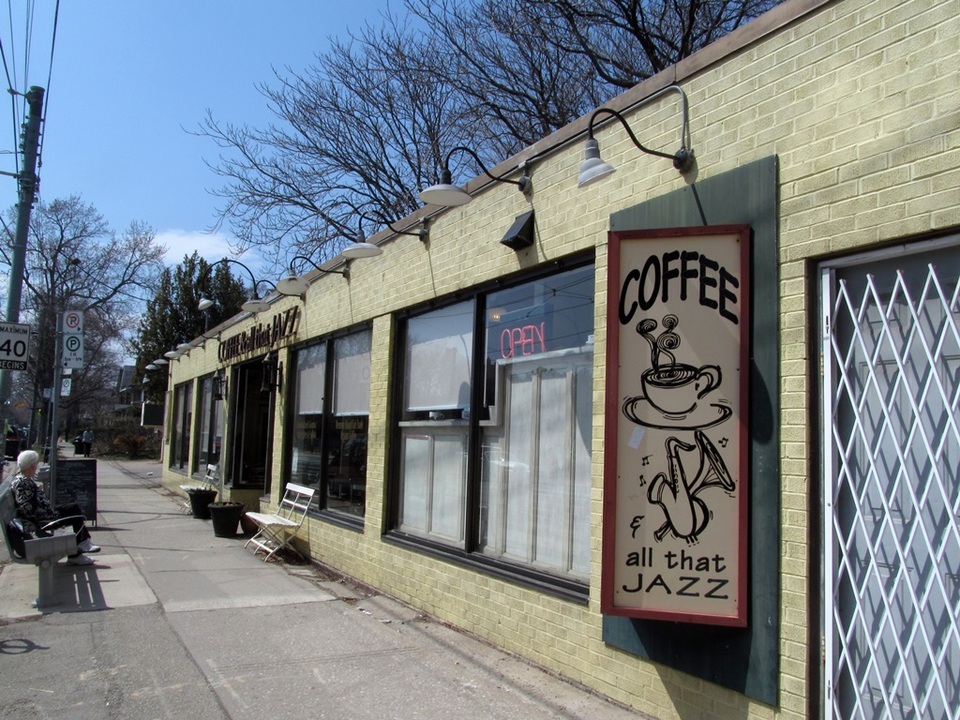 Coffee and All that Jazz

The official coffee taster noted that the place looked clean without seeming at all 'slick', and while there was music playing in the background, it was some quiet, benign jazz that didn't intrude into our conversation. I even recognized a song, eventually.

All right, so what was the coffee like? My connoisseur declared the plain brewed coffee ($1.85) to be 'pleasant but weak', as well as being 'a bit thin' but possessing 'a good mouthfeel' (this is a real term. I've checked). All That Jazz is a bit more meal-oriented than either the Cherry Bomb or Belljar, with various sandwiches and salads, as well as juice and baked goods (mostly from Dufflet bakeries). The butter tart I tried was unremarkable, cost $3.25, and lacked nuts. 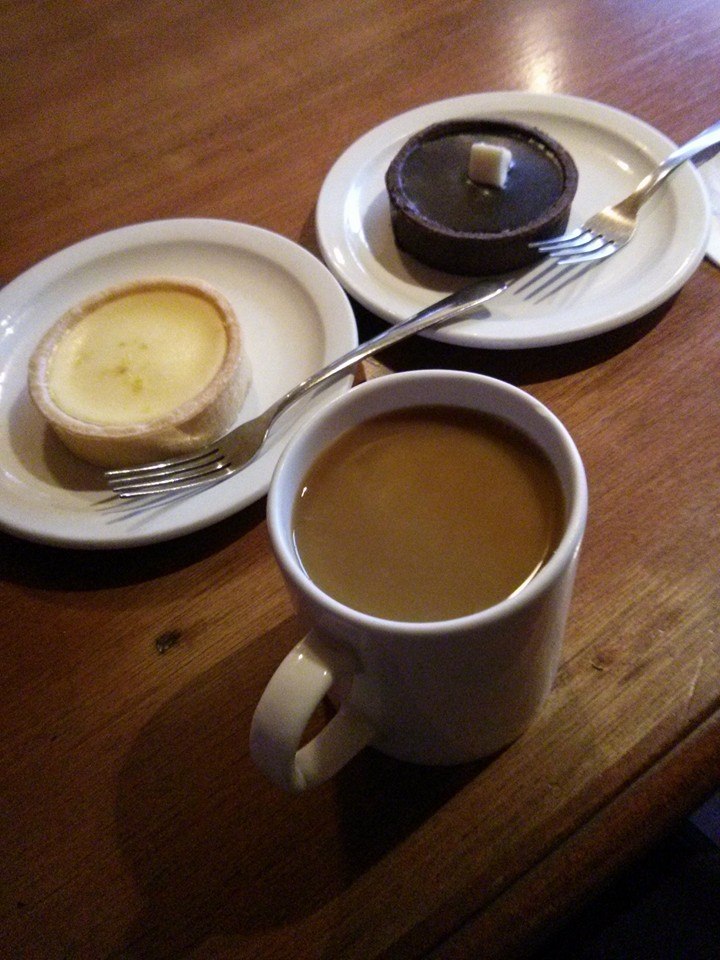 After all this, I feel I've earned the momentary right to address the coffee-drinking hordes as though I were one of them. So, for all you caf-fiends, you seekers of dark and exotic beans, I bring this message: This isn't the end, it's just the beginning. There are more little coffee shops around Roncesvalles that we missed, and some that we walked past to get to these three. This was just to whet your appetite.