Gelato. Sherbet. Sorbet. Ice cream. Whichever one you pick, it's cold and delightful and very nearly necessary on some of those really sweltering summer days. While it would be a worthy endeavour to list and describe all of the purveyors of frozen first-aid operating in Toronto, I won't attempt it at this point. Instead, for those of you heading towards the Roncesvalles area, here are three temples to sweet temptation that you might want to visit while you're there. 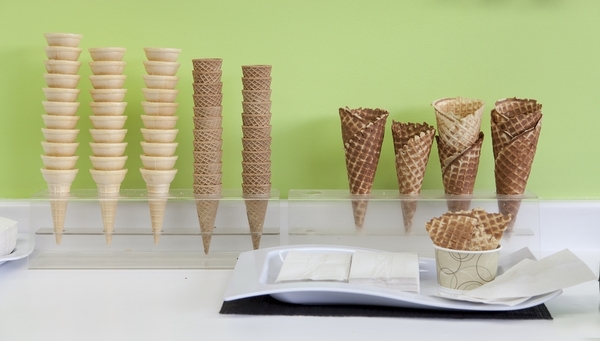 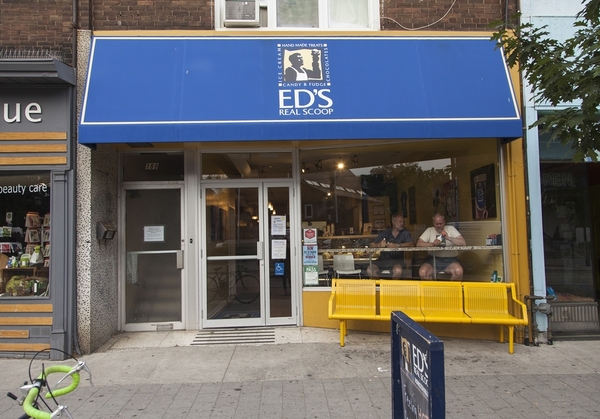 This was the obvious place to start (and, some might say, end) an exploration of Roncesvalles ice cream shops. Started in the Beaches over a decade ago by Ed Francis, Ed's Real Scoop has three locations going in Toronto now, and tends to show up on lists of the city's best ice cream parlours. All of the gelato, ice cream, and sorbet sold at Ed's is made by Ed's staff—on site, I suspect, since there is a mysterious 'churning room' at the back in the Roncesvalles store. 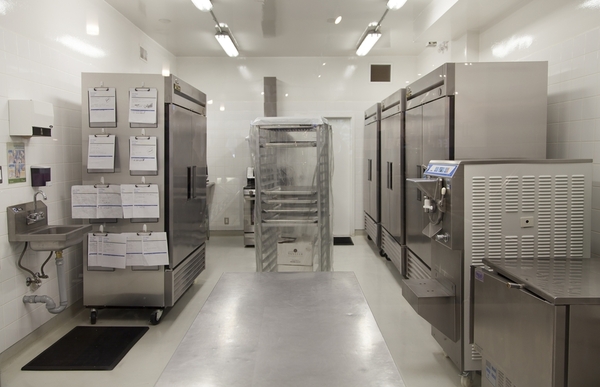 The Mysterious "Churning" Room at Ed's Scoop - Found it!

Physically, the place is fairly small, with a couple little tables in the back, and a few more in the front window. I'd guess that on a really crowded day, 15 people might be able to squeeze themselves in there—but they'd probably know each other pretty well by the end of the adventure. There is a washroom at the back though, which is nice if you plan to linger. 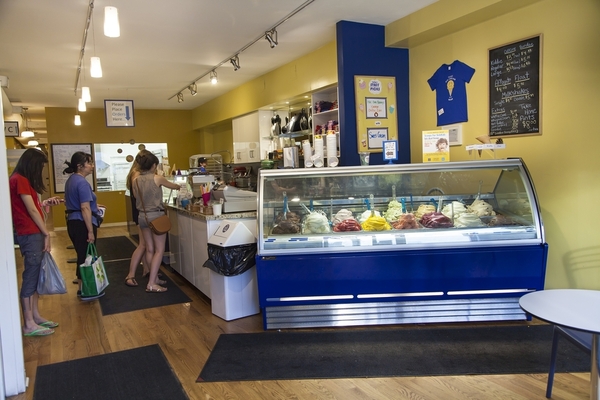 Small, But Cute and Cozy! 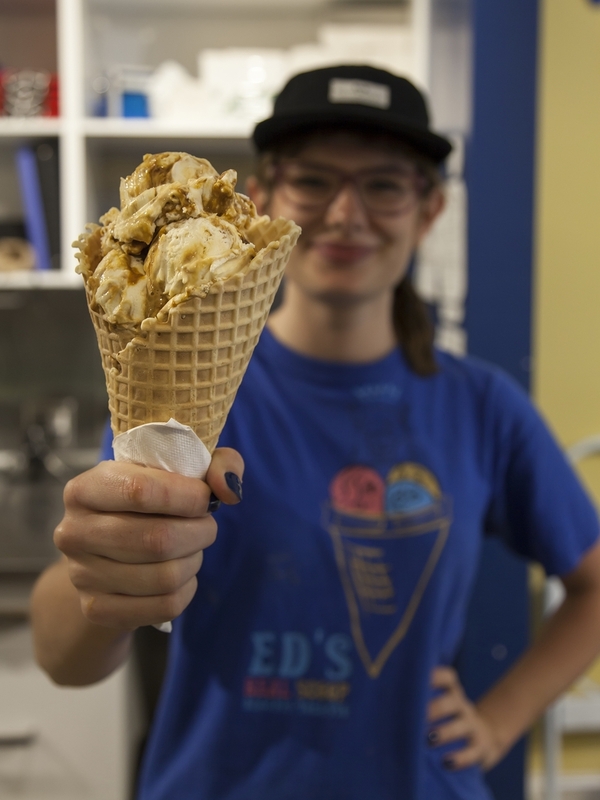 Here, Have an Ice Cream! 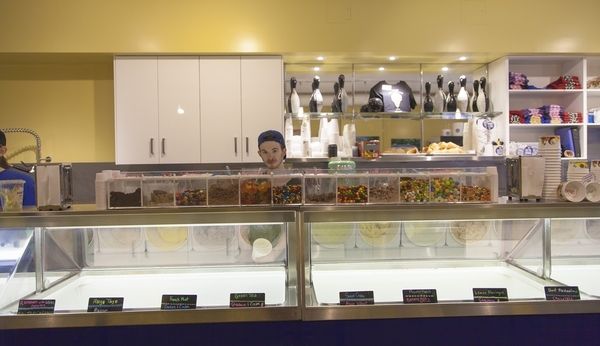 Lots of Toppings to Choose From - Just Ask!

This isn't a good place for the deeply indecisive. To help those standing in line before they get to look at their options, a whiteboard on the wall lists them; 28 flavours of ice cream (ranging from perfectly ordinary flavours like strawberry to burned marshmallow, Guinness, and cinnamon), 11 types of gelato (including chilli-chocolate, hazelnut, and blueberry), five sorbets (they had mango and passion fruit!), and four frozen yoghurts. There's also a selection of toppings and 'goodies' (official industry term) such as whipped cream, hot fudge, and gummy worms. 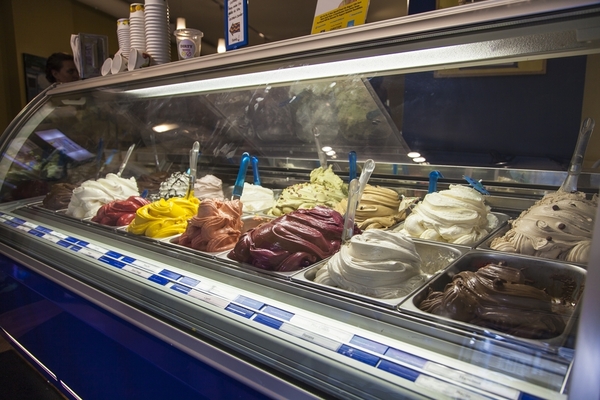 Can You Paint With All the Colours of the.. Ice Cream? 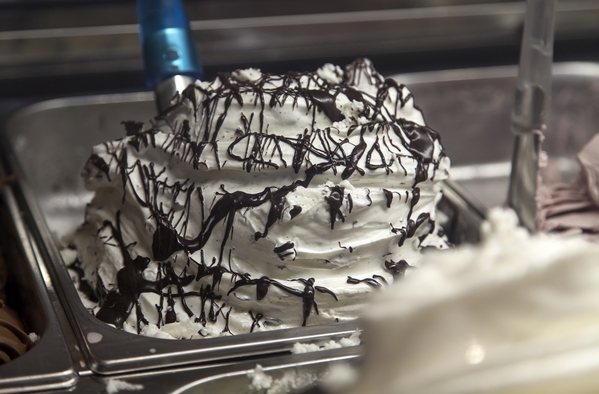 Who Can Resist This??

The display of sorbet and gelato that greets customers entering the Real Scoop barely looks real: it's almost sculpted (in a soft, squeezed looking way), and the colours are quite vibrant in places. I spent much of my time sitting staring at it, and wishing that I'd picked Tanzanian dark chocolate and mango instead of strawberry rhubarb and chocolate peanut butter ($4.20 including tax for a medium-sized cup). 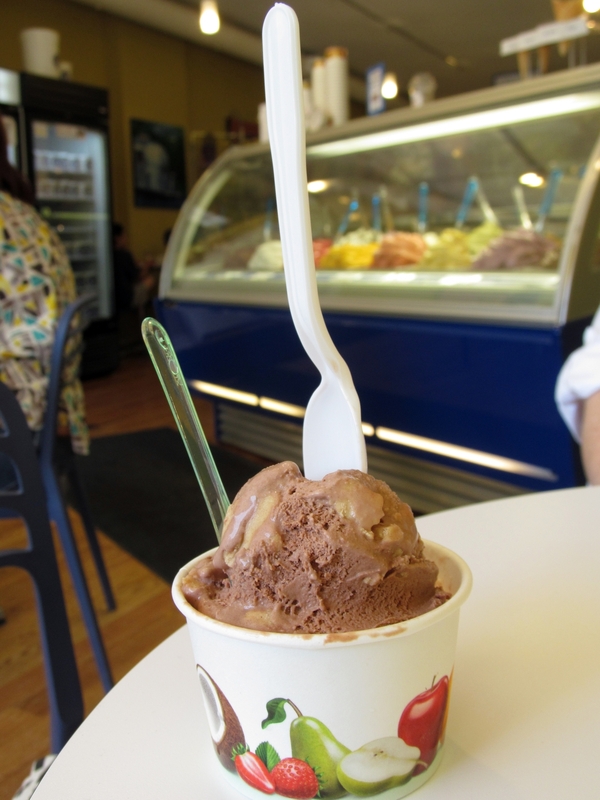 My Scoop of Ed's Scoop

As far as I know, there are two main reasons to pick an ice cream parlour over a grocery store freezer section. These are quality and selection. You're just not going to find caramel apple ice cream at Loblaws. Quality wise, Ed's was decent but not overwhelming. Neither of my two choices was too sweet, or tainted with overtly unnatural, candy-like flavours. The strawberry rhubarb tasted as though actual fruit were been involved in its creation, and the chocolate peanut butter had about the perfect balance of the two flavours (and nice big chunks of peanut butter, to boot). Both were milder than I'd have liked though, and the chocolate in particular seemed very weak, lacking the bitter richness of the really good stuff.

I was pleased to see that, alongside the floats and sundaes, Ed's Real Scoop also sells 'take home' pint tubs for $8. 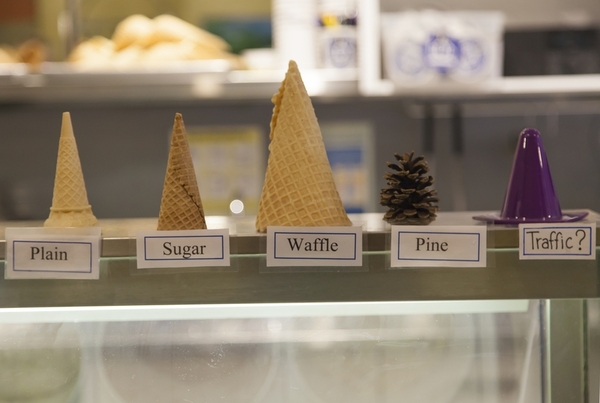 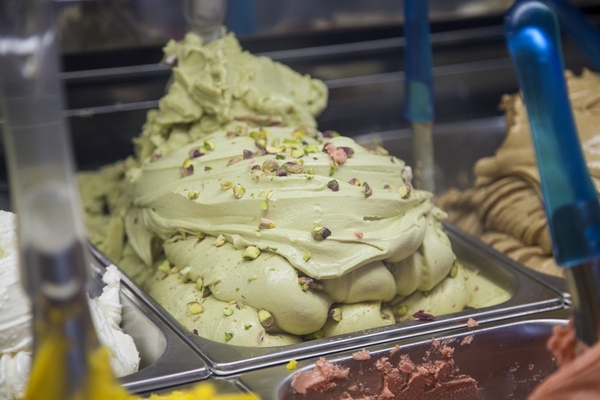 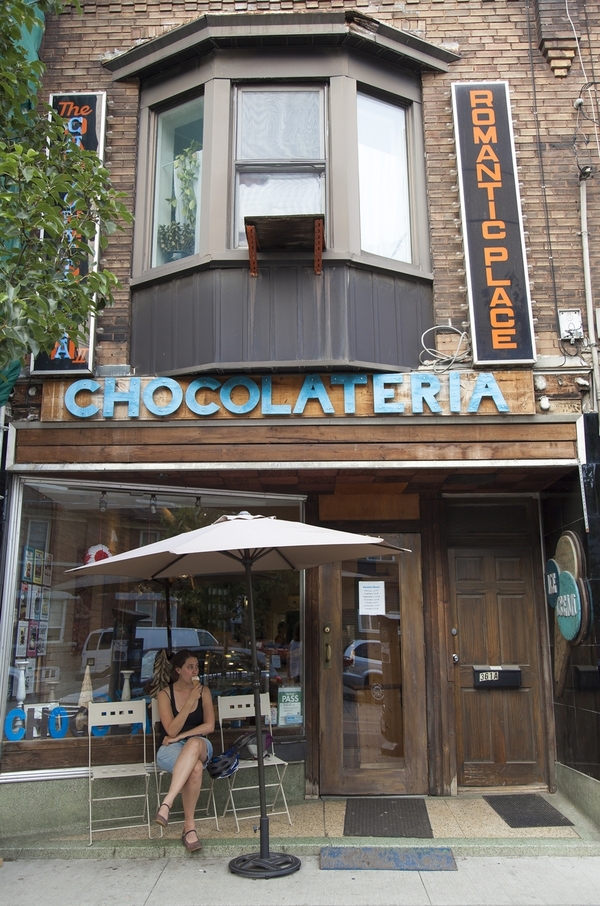 This is the fancy one. Sitting on Roncesvalles between Neepawa Avenue and Constance Street, the Chocolateria is not, primarily, an ice cream place. It's a chocolate place, with $1.40 truffles, candied bacon (yes, you read that right), big, highfalutin chocolate bars for about $6 each, and sundry other intriguing coco-based creations.

For some reason, the store actually smelled a lot more like potpourri than chocolate when I was there, but the smell went well with the dark wooden shelves and general artsy feel of the place. I'm giving this the ambience prize out of the three, even though it isn't, technically, an ice cream parlour, and it only has seating for six people jammed together at the blue wooden tables in the front. Quality, not quantity, is the theme here. 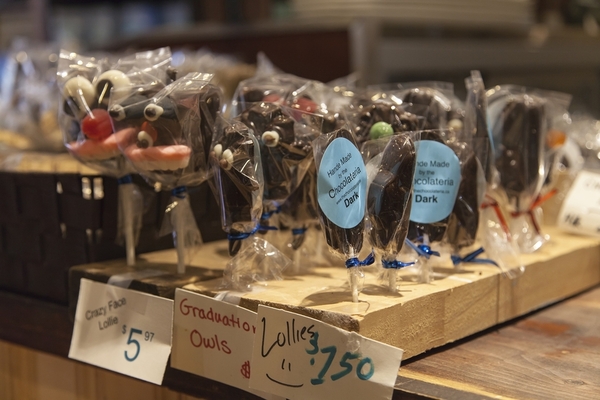 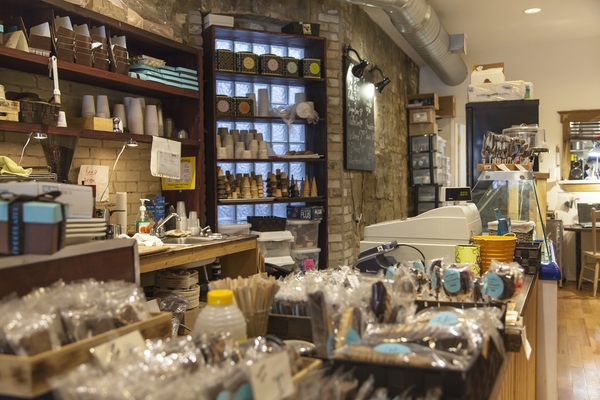 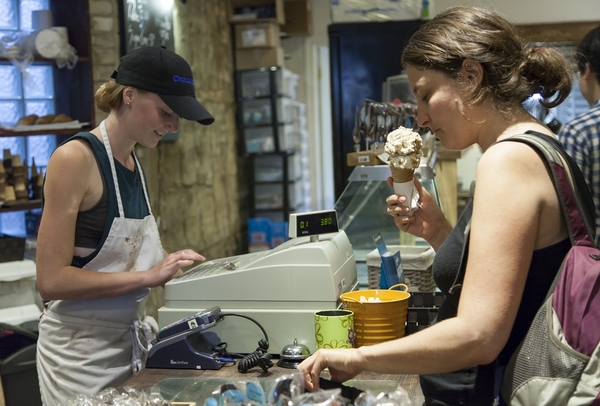 Look at the Size of that Scoop!

It's also the theme of the ice cream. There's no agonizing over how to build your custom sundae at the Chocolateria; in fact, I didn't see a sundae or milkshake option mentioned anywhere. Just cups and cones, and a choice of about 15 interesting but fairly safe flavours such as lemon raspberry, strawberry shortcake, and burned caramel (this last one seems to have lots of fans on the internet). Like Ed's Real Scoop, they make the ice cream in-house, and serve it out of surprisingly undecorative buckets. 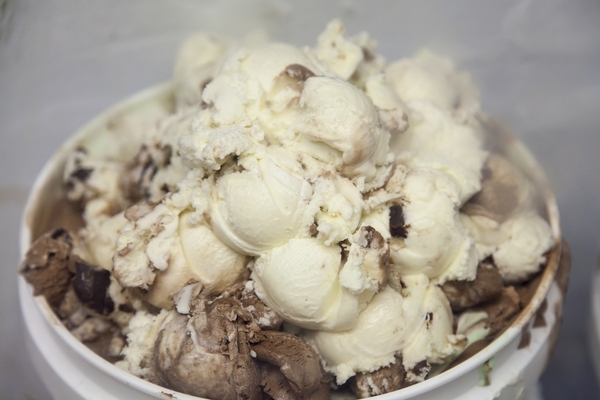 Who Cares About the Bucket if the Ice Cream is Good? 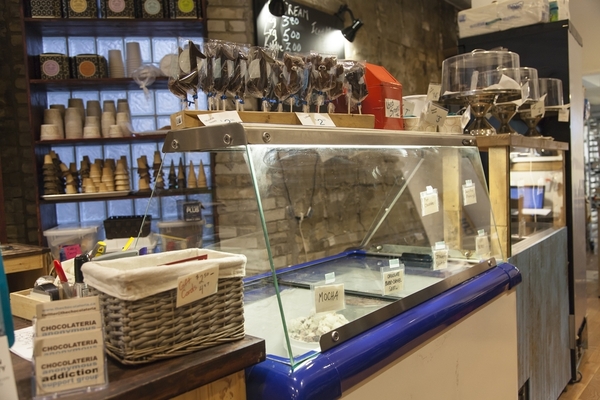 Don't Get Fooled by the Simple Looks, the Ice Cream is Really Good! 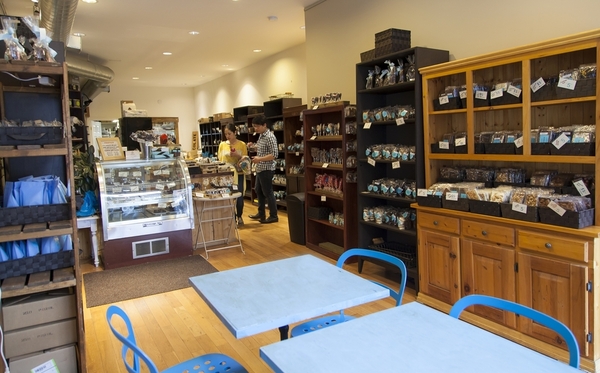 You Can Enjoy Your Ice Cream Sitting Down if You Want

I got plain old chocolate, figuring that they ought to be particularly good at it here, and I wasn't disappointed. Although too sophisticated for any chips, swirls, or brownie chunks, the chocolate was almost exactly the dark, satisfyingly bitter (but not too bitter) confection I'd hoped for at Ed's. At $3 for a little tiny kiddie cup, Chocolateria charges about the same as Ed's Real Scoop—but for slightly smaller portions. While they didn't appear to have any toppings for ice cream, they will sell you a big cookie or nanimo bar if you crave something to chew on. 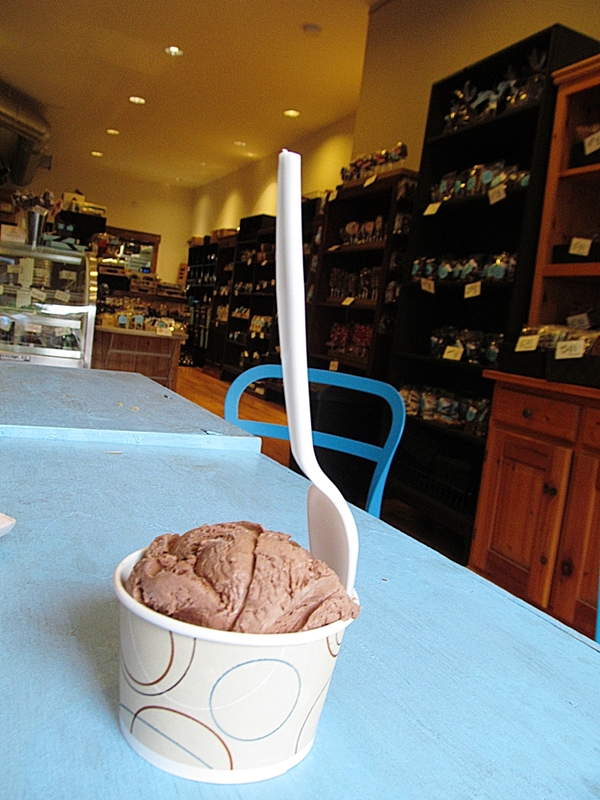 My Choice of Chocolateria Goodness 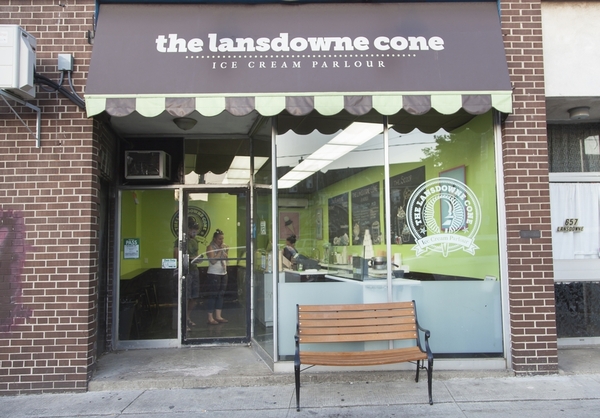 After the Chocolateria I trekked over to Bloor and Lansdowne to visit the Lansdowne Cone. I know, this is technically a bit east of Roncesvalles Village proper, but it seemed silly not to try it, and I was hoping for a second chance to eat something mango flavoured.

The Lansdowne Cone is the cheap joint out of the three, meaning that you get zero ambience (a cheerful but stark lime green interior with black accents), but a fair bit of choice (for less money than either of the other two). The website claims they have 28 flavours, but I saw 20 available—with a few empty spaces for more. Most of the options were fairly sensible, although they did have birthday cake, blue bubble-gum, and grapenut, of all things. They did not, it seems, have any gelato, and very few sherbets (the black cherry frozen yoghurt was a wonderful shade of purple though). 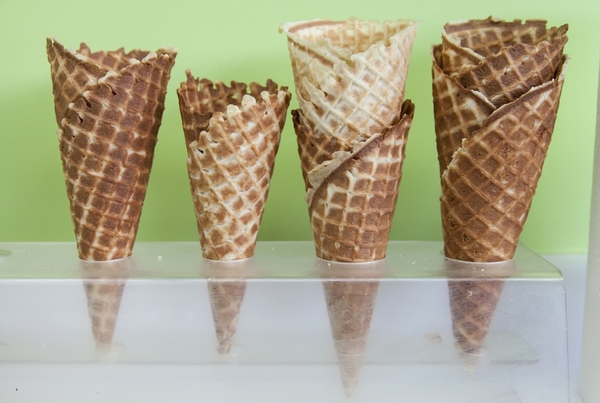 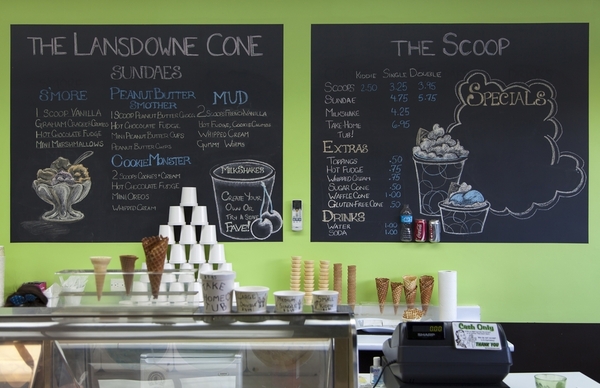 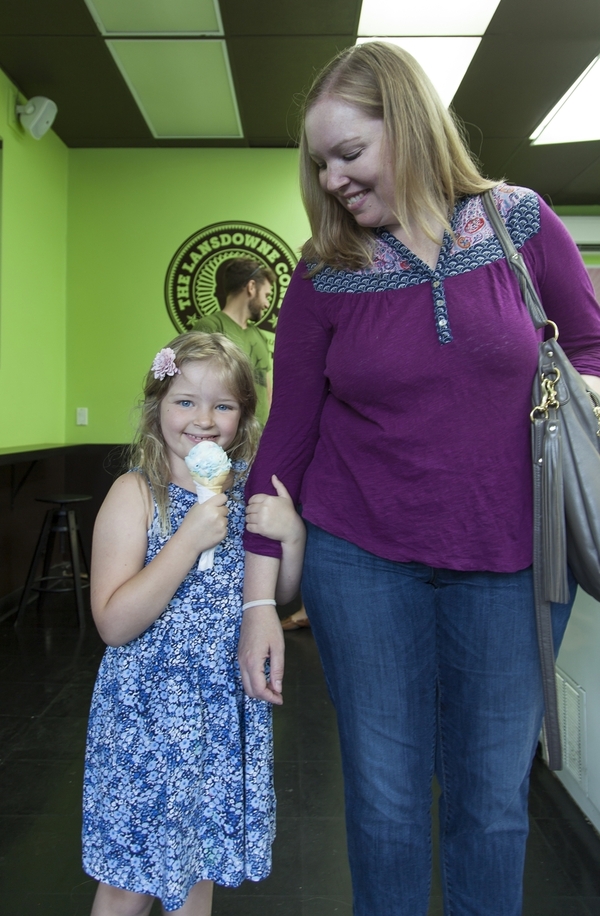 Remembering my fruit intentions, I bought a large three-flavour cup ($4.50 with tax) with lime-raspberry-lemon sherbet, moose tracks (chocolate with caramel and cashews), and death by chocolate (chocolate ice cream with chocolate chunks). 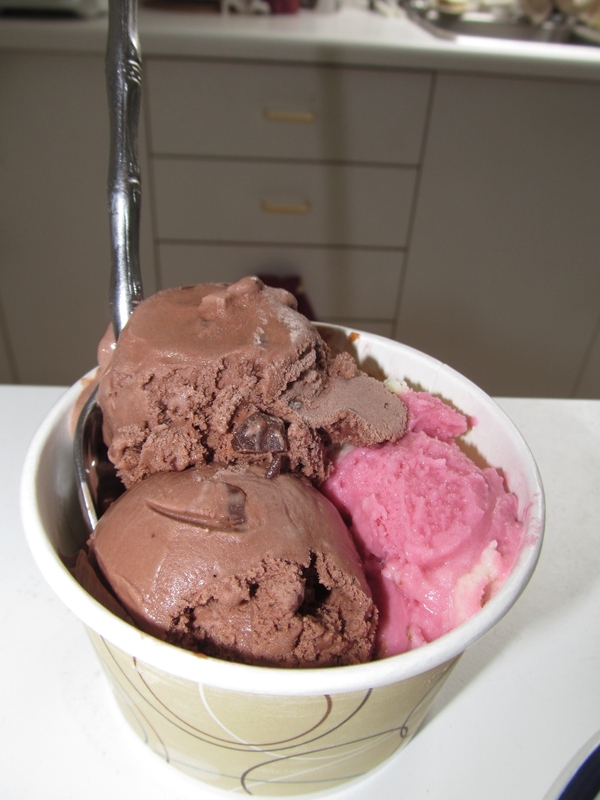 My Choice at The Landsdowne Cone

Sadly, none of these promising selections were as good as those at Ed's or the Chocolateria. The chocolate was far too light and sweet, and the sherbet, while tasty, wasn't nearly as tart and tangy as it ought to have been (also, the lemon and lime blurred together into one general citrus taste, but that's a fairly minor complaint in the big scheme of things). 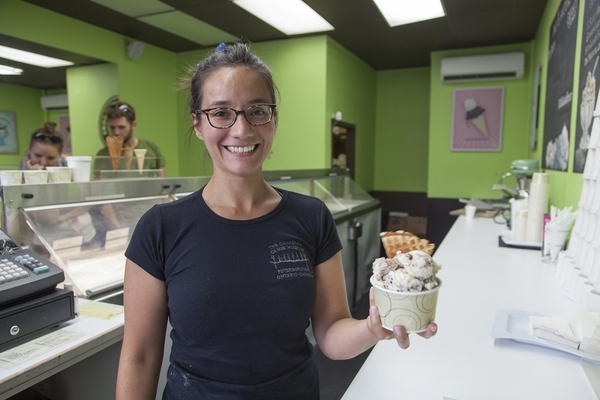 They Have Very Helpful Staff at The Lansdowne Cone 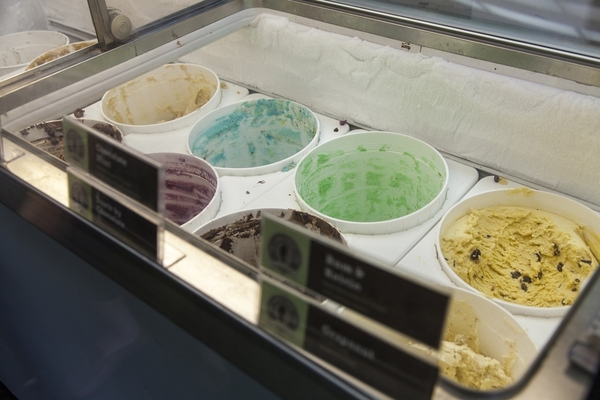 Almost Everything Was Gone by the Time We Visited - But That's a Good Sign, Right?

Leaving aside matters of taste, the Lansdowne Cone does present customers with a number of ice cream augmentation options. They do milkshakes and toppings, and take-home tubs (for a little under $8), and have a few official, pre-planned sundaes you can order if you don't feel like designing your own.

I'm not going to objectively declare one ice cream shop to be supreme here. It depends on what you're looking for. If you want high quality (and price) and don't mind a limited selection and small servings, Chocolateria's the place to go. If you prefer a wider assortment of lighter, sweeter, less expensive ice creams, then head to the Lansdowne Cone. For the widest variety and better-than-average taste, try Ed's Real Scoop.

Or, in the spirit of a dangerously wobbling three-scoop cone, you could try them all. 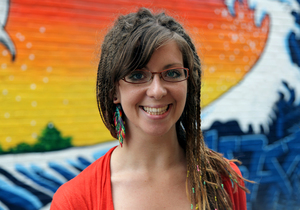 Bea is a Toronto based musician, photographer, teacher and a multidisciplinary visual artist. Growing up surrounded by her father's antique camera collection, Bea was naturally inclined towards photography since an early age. She loves taking portraits of unique faces and always tries to capture the colours of the world around us. Her main areas of interest are documentary, performance and travel photography.