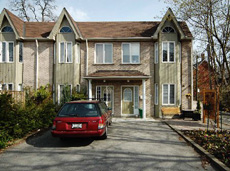 The location of this freehold townhouse was both its best and worst selling feature.

The two-bedroom home is at the end of a laneway behind some commercial buildings, but it's that site that helped seal the deal at a very affordable $224,000, agent Julie Kinnear says.

"It's hard to buy a house for $224,000 in Toronto right now that doesn't need a whole lot of work," Ms. Kinnear says, explaining that the lower price was a trade-off for the lack of neighbourhood atmosphere.

"It's part of a townhouse complex with about 10 houses in a row that are really cute, but they're sort of in the middle of nowhere."

However, the area is in transition, she says, and there are amenities nearby, such as the shops and restaurants along Keele Street and Dundas Street West. Further south are schools, Bloor West Village, the subway line and High Park.

The four-year-old home has an open-concept layout on the main floor, with ceramic floors in the principal living spaces and rear cooking area, which has a raised breakfast bar.

The second floor features new laminate flooring in the halls and bedrooms. The master has a bay window, and both bedrooms overlook the street. The main bathroom as well as laundry facilities are also on this floor. A powder room is situated beneath the staircase.

There is parking in the front.