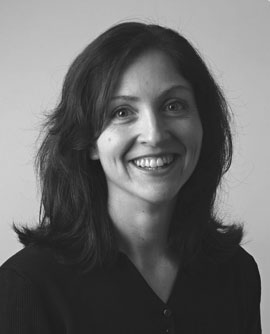 Nada Thomson
courtesy of The Sanctuary

Thomson has made a real shift from helping to organize people's homes to helping to organize their lives."I've been good," says Nada Thomson, Director of Development at The Sanctuary Mission. "It's been an adjustment period. There is so much emotional stress everyday. So you're better for it."

The Santuary is a healthy or wealthy community that is embodied for the poor. It is open to all belief systems and all ethnic backgrounds. The community is made up of men and women from 25 to 55. Five hundred faces every week and annually in the thousands.

"We have street outreach, a relationship with them simply through our outreach team, jail visits, outreach visits, Children's Aid, court visits," says Thomson. "We help to get their kids into safe homes. Just as you would walk with your family and friends. We have a health clinic and a psychiatrist, or substance abuse rehab or physical rehab for their body, or all of those things – we walk with them along with that. We have meals and it is their friends [who prepare them], it is not a soup kitchen."
Nada Thomson started out as a Personal Organizer with her own company called Artful Organizers. She made the transition into helping the poor around 2006.

"I hung out in the building from 2006 to 2008. There was a woman who was helping out in the kitchen and she was afraid to go out to the eating area so she worked in the kitchen. She realized that everyone that she was working with in the kitchen were waking up in an alley or had mental illness, or had just gotten out of jail. They had a life of adversity and were dealing with huge adversities to get over alone – that's why we're here community." 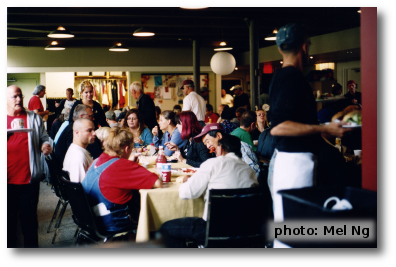 Drop In center
courtesy of The Sanctuary

Every year, The Santuary has a great Christmas feast with candles and in the galley with huge windows. They have had a church donate some Christmas gift bags and they do have talent shows and they do a play – the Screaming Monkeys. They do a big walk in the summertime.
"It is really important that people know that when they donate money, they can participate. The rich and the poor, we want to blur the lines. People who have been stripped of their dignity, will be given back their dignity. Making a difference is more about just giving money and also making new friends."

Thomson was brought on as the donor relations person, the Director of Development.

"I do street outreach and all the staff do it, I have people in the community who I walk very closely with. We're not counseling, we're like friends. You have a deeper affinity for certain people than others, there are many people so there is great balance."

Seventy per cent of the balance of the operating budget is from people who work, then 30 per cent is from the Trillium Foundation and other foundations. Thomson is there to be a liaison and always looking for donors.

"We're not here to replace social services, we're here to walk along social services," Thomson says. "We have friends who were living on the street and they are now living inside. They would not be able to do this without someone to help them look for a place and help them get furniture.

'We have employment training, we're revamping it. Meaningful gainful employment for people. We have housing for men that are not rooming houses where they have meals together and there are no locks and they went from the street to the sanctuary home – we would love to do that for hundreds of people."

It was late 2005 and early 2006 and Thomson was feeling a real connection to do something meaningful in Toronto.

"I needed to find something. I started looking for a place to go for church. I went to one which was doing something with Sanctuary. I started coming down to the Thursday night drop-ins and I could play cards. They have a church service in the evenings on Saturdays. I fell in love with the whole place and the people. You do not come here trying to cover yourself up, you strip away all the layers of how messy our lives are. To be broken and not quite on top of things as I am. In a few years they [The Sanctuary] were in the position to bring on someone like me and then I was a good fit."
When Thomson had Artful Organizers it was an amalgation of all her professional skills that she had gone to Sheridan for. 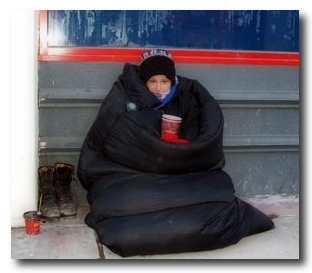 Street Outreach
courtesy of The Sanctuary

"I was doing decorating and home staging too. I loved the people that I worked with and the variety. It was very successful without ever needing to do so. Word of mouth is very much the best part of advertising. There was always a part of me that felt a bit of a fraud. It was very successful. There was always a part of me that made me feel as though people would catch me out in the rouse. I was able to breathe at The Sanctuary. I've maintained amazing friendships with many of my [former] clients. When I changed, it was a huge adjustment, realizing how much of my life was doing for others, rather than being cared for by others. You cannot let yourself care for them, without being cared for by them. They see the strain in my eyes and they will care for you when they live in an alley. Every day being forced to be vulnerable, to be forced to be honest. We have staff meetings all the time, we say how are you? We have to be honest. I'm single and childless and I was flitting from house-to-house but it was superficial. My clients were really wonderful people, but there is a season for everything and I did not know how to have depth in relationships and I'm learning that here."

One of the success stories of The Sanctuary is that a young woman was born and raised in the Toronto area. Not too soon after she was born, she was put into foster care. Her aunt set her crib on fire. Her grandmother found her covered in coachroaches. She was sexually abused. She bounced from foster home to foster home and relationship to relationship, and she was addicted to many things. She has also used her body. Many people helped her. She has been a regular at Sancturay for four years.

"It was our nurses at health care that helped her get a better life, couple of years ago she got her GED she has her own business called Pause for Paws and when I first met her she was angry and now she's clean and fresh and she's pretty," says Thomson. "She takes pictures of animals. They may be different, transition takes a long time. People who feel that they don't deserve the air that they are breathing. We are committed to these people for as long as they live. We can offer them some real dignity building amenities. Even if we did not have the funding, we would not be able to reach new people, but we would not abandon the people who are here already. Such a small number of our friends see that kind of change in their lives, but everyone who comes through these doors see a kind of change in their lives."

"The organizing was a broad range. I would go into some rooms that I would barely be able to open the door it would be so crammed full. Is it staying in the home, would it belong to someone else. There were emotional issues of other people's things. The most part it was the attachment to the person that they thought of with the thing. To know that the person will still love you with the item gone.

"Other situations it was a basement that was finished and they wanted a play area, a workout zone and making the space planning. I had other clients were I helped them change them over their cupboards and also kitchen organizing. Helping things flow better. Making spaces better places. I would Rearrange the furniture, shake the whole place up so it felt the whole place had been redone. Using what they have. Reworking the space to get the vision of the whole home. What furniture to get, what colours – colour consultations. The organizing and the rearraing decorating…then there was the homestaging. I could help people decide what people were keeping and leaving and sometime we rented furniture and artwork. In each case a big case of what I was doing was getting to know my clients. Some people wanted to mimic other designer's styles, that's not what I did – it was working with how a couple's voice could be morphed and find new pieces to build relationships. I went from relationship building to relationship building.

"We can pore out all of our time and tender-loving care and unless the person is not in receivership, it goes nowhere. It's not about four walls and a roof. A lot of stuff got them onto the street and a lot is needed to keep them off the street. It is amazing how vulnerable we are and how little it takes to destroy the heart of a child. When people become too old for the Yonge Street Mission, they come up here and they're young and they're beautiful, but they break my heart."