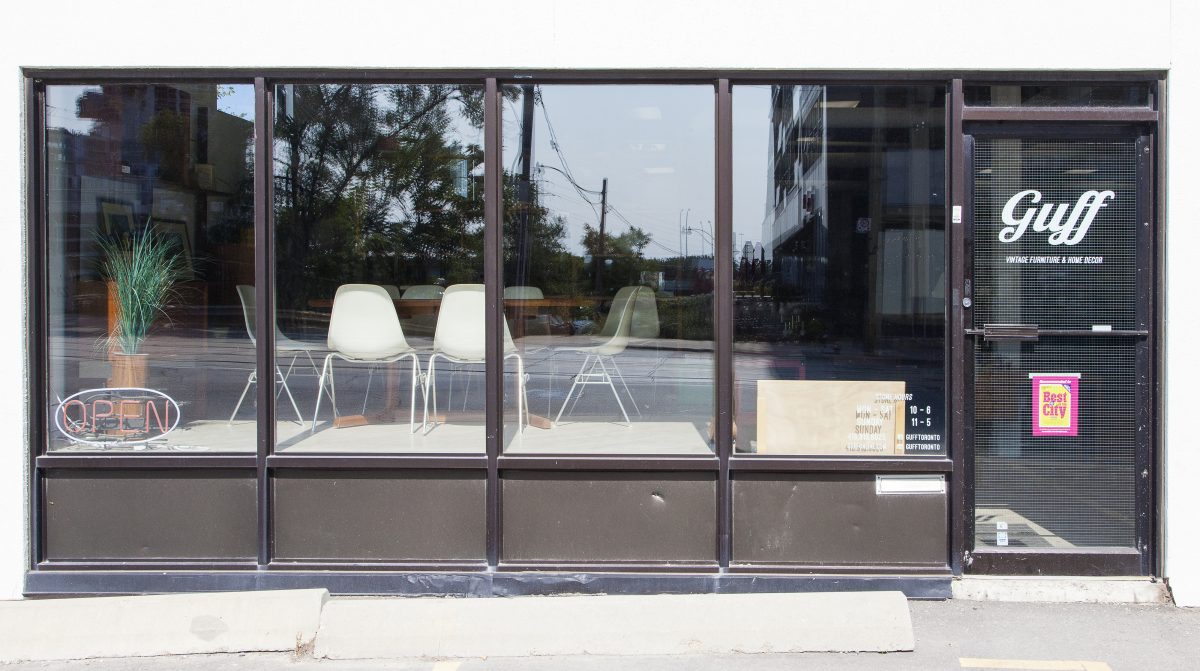 You may not be able to find a pot of gold hiding at the end of a rainbow in Toronto, but you can find affordably-priced vintage furniture at the end of a bridge. The eastern end of the Queen Street bridge over the Don Valley is home to the latest incarnation of GUFF - Good Used Furniture Finds, although word is the "G" has been upgraded from "Good" to "Great".

GUFF is an unassuming place, plain on the outside, sprawling and informal indoors. Neither cramped nor cluttered, the sales floor seems to gradually blend into workspace and storage near the back, making one feel as though they've stumbled through the secret back door. 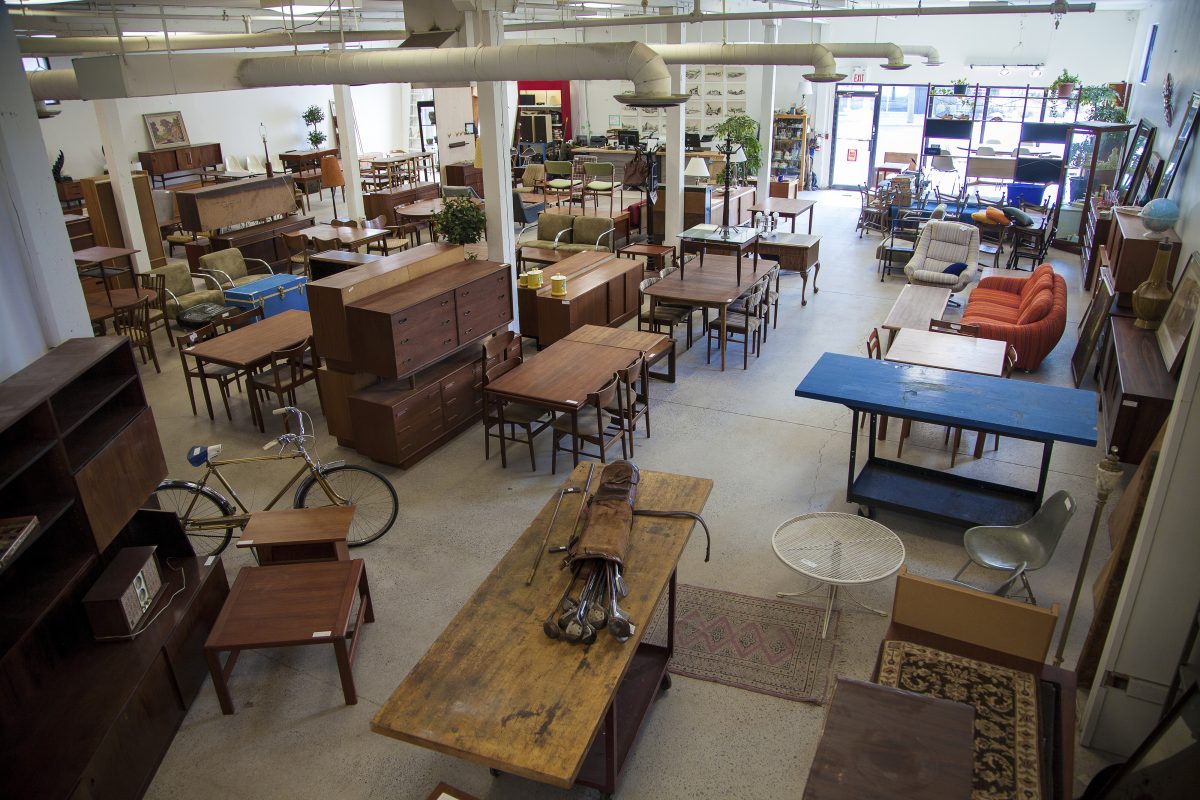 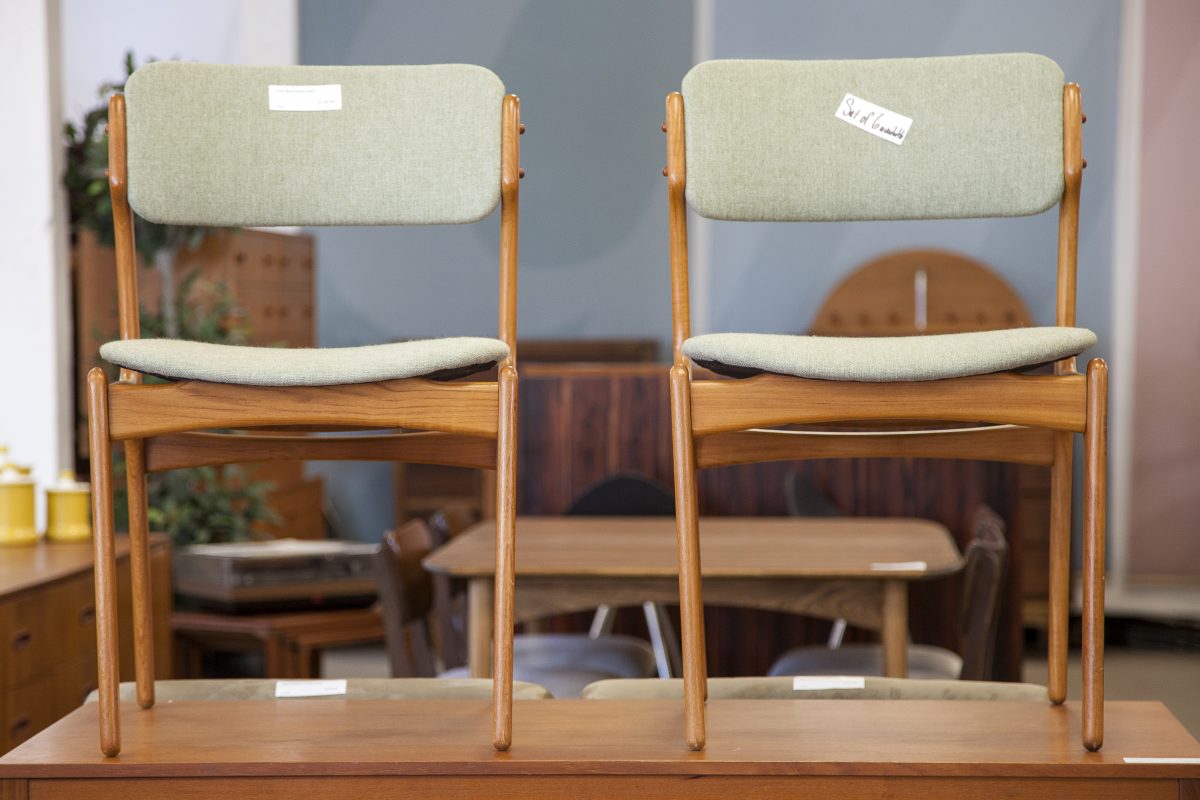 The story of GUFF began with the odd combination of luck, city geography and courtship. Many years ago, John Jakeman, the man who would one day start the store and who runs it to this day, was dating a woman who lived near Queen West, which is know for its profusion of vintage and antique stores. As he tells it:

I just sort of found myself poking around the antique shops and then by accident one day, I found myself at an auction. I don't even know exactly what got me there, but I bought something, took it to these guys and they bought it from me for more money. And it just started from there.

After that, Jakeman started going to auctions on purpose. He became a "picker" – making his money buying pieces from auctions and estate sales, and re-selling them to vintage and antique stores. He enjoyed the work but eventually came to the conclusion that having his own store would be a more lucrative venture. He opened GUFF in Leslieville, in 2000. 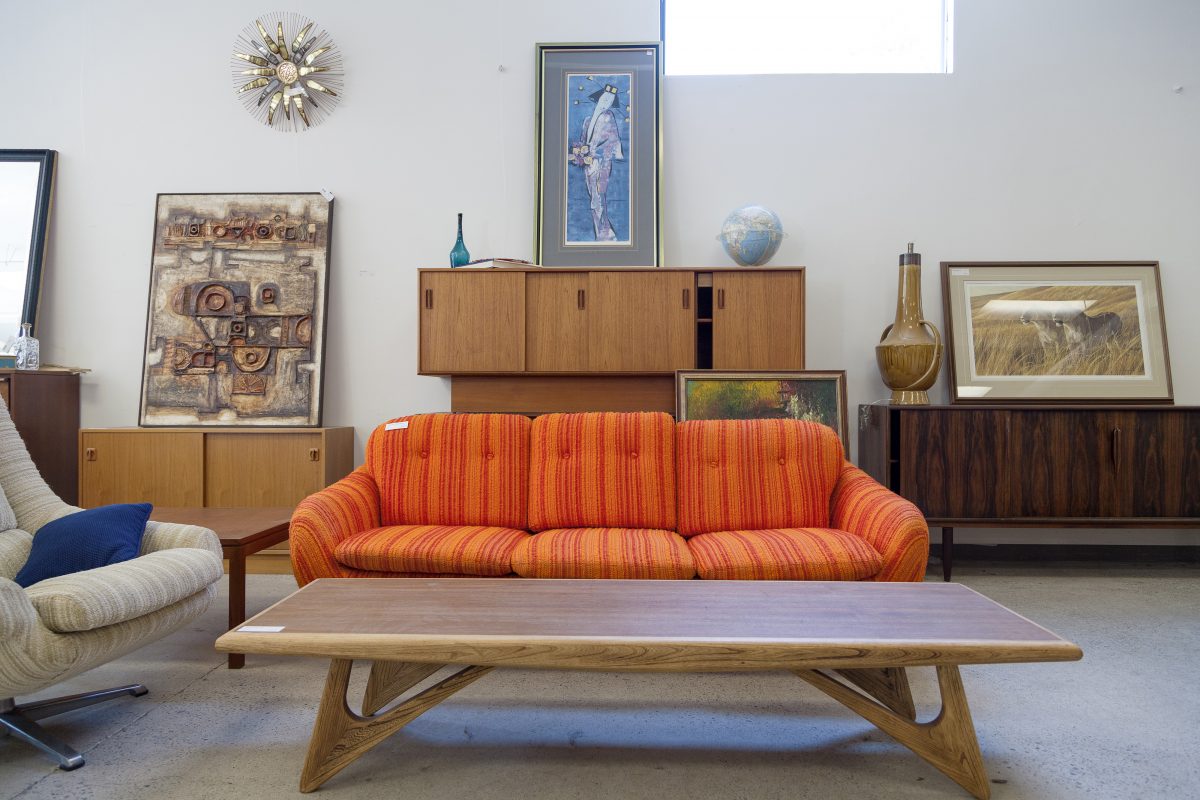 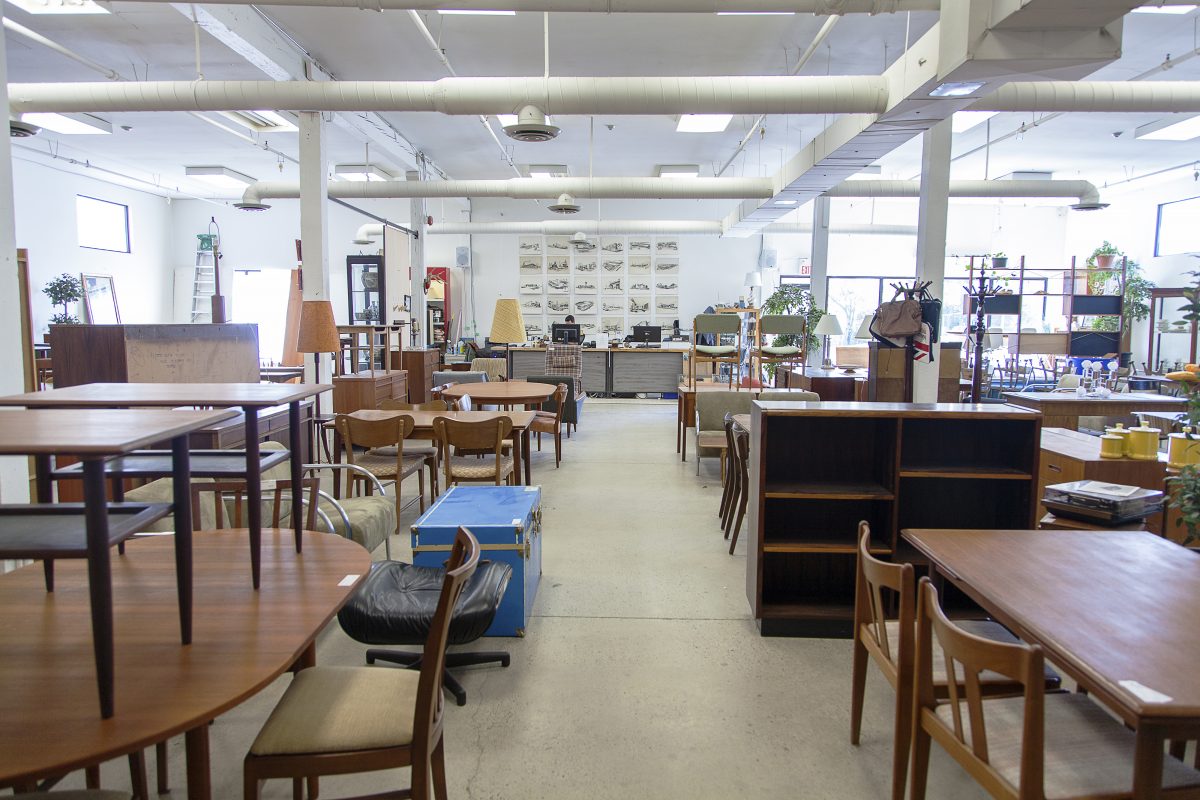 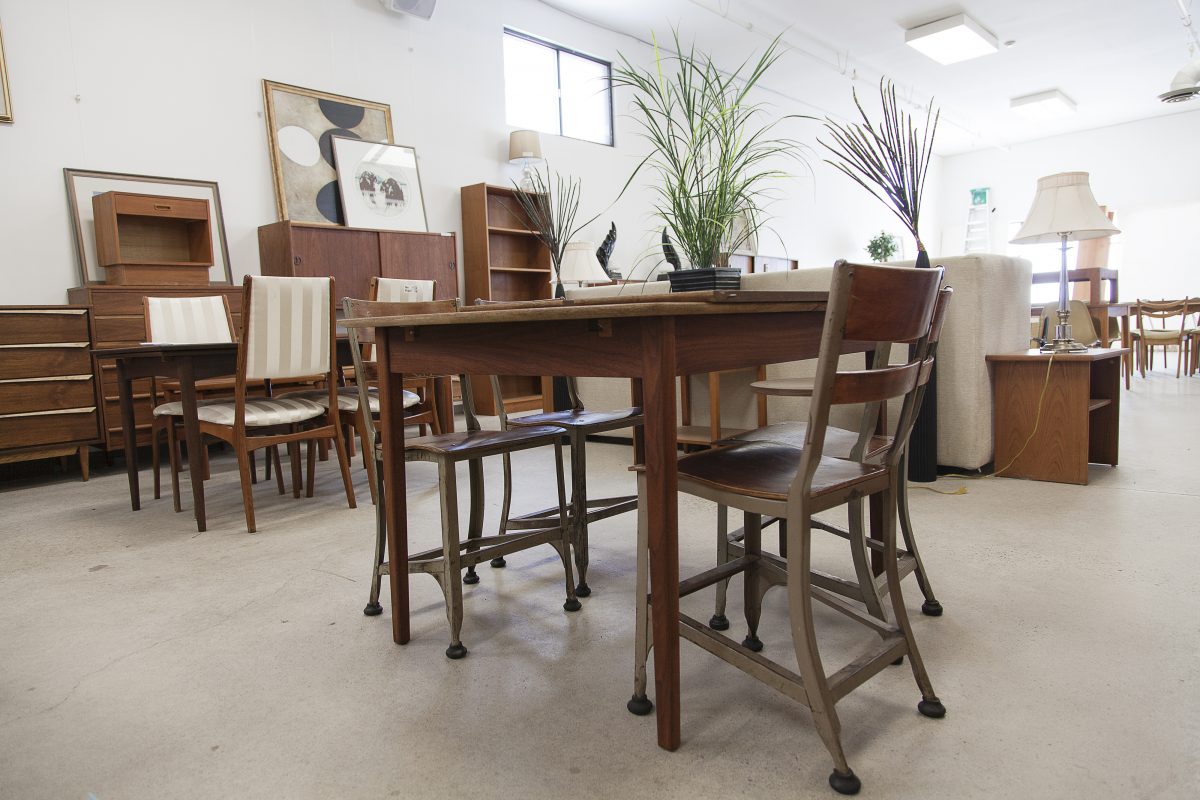 In the seventeen years since its opening, GUFF has moved twice, grown to six employees, and evolved from a small, fairly generalized vintage furniture store to one primarily focused on Mid-Century Modern and Danish Modern pieces. Now, the pickers bring things to Jakeman:

It's not like I have to go out and find one piece here or one piece there. People are getting in touch with us, and they can send us digital pictures of what they have for sale. I've also developed a number of relationships over the years with various people who are in what's called "seniors downsizing companies". There's quite a few of them out there now, and I deal with them when they have a senior who's downsizing. They have some things that they think may be suitable for me - they get in touch with me.

And Jakeman has been in the business long enough to know which of those downsizing pieces to choose:

The good stuff, the Danish modern furniture and stuff like that, is easy to spot. It stands right out. And the nicer pieces sell very quickly. They're sometimes harder to get, and you have to pay more for them, but you know there's going to be a market for it. But there are sometimes other pieces that are a little tougher to call, and you sort of have to use your intuition on whether or not they're going to sell. 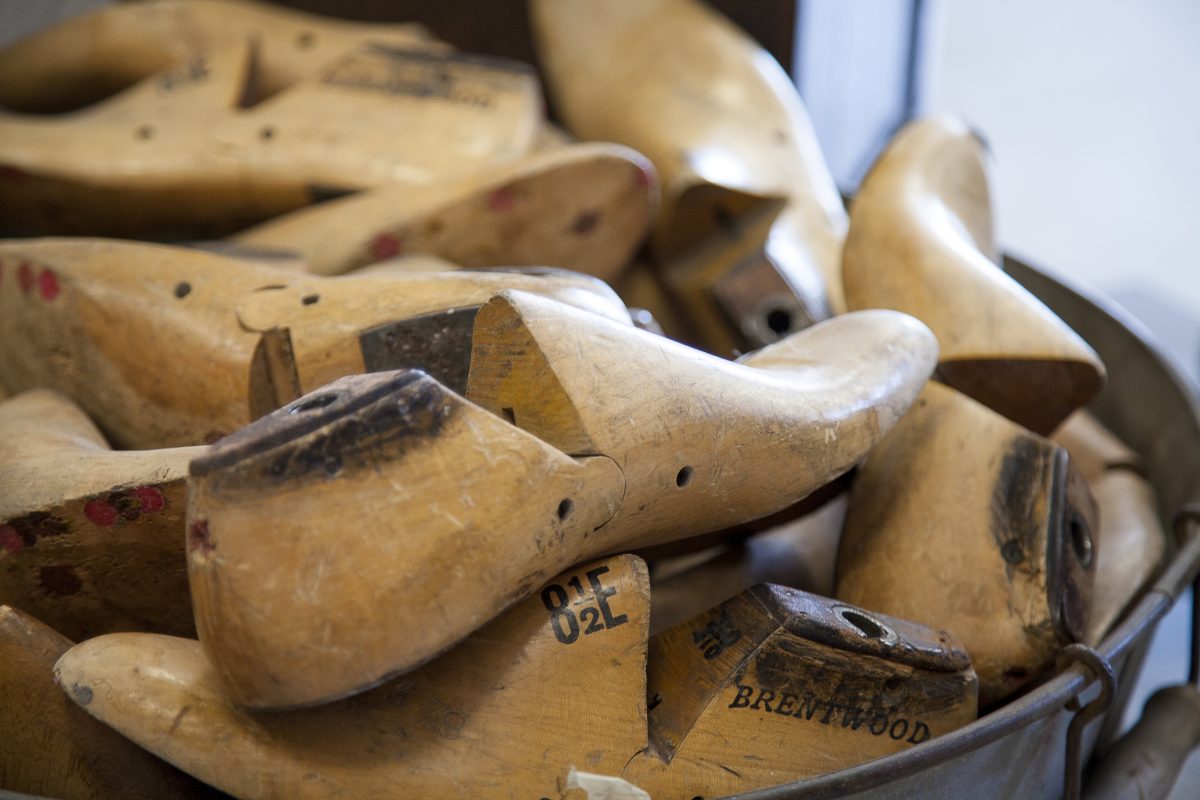 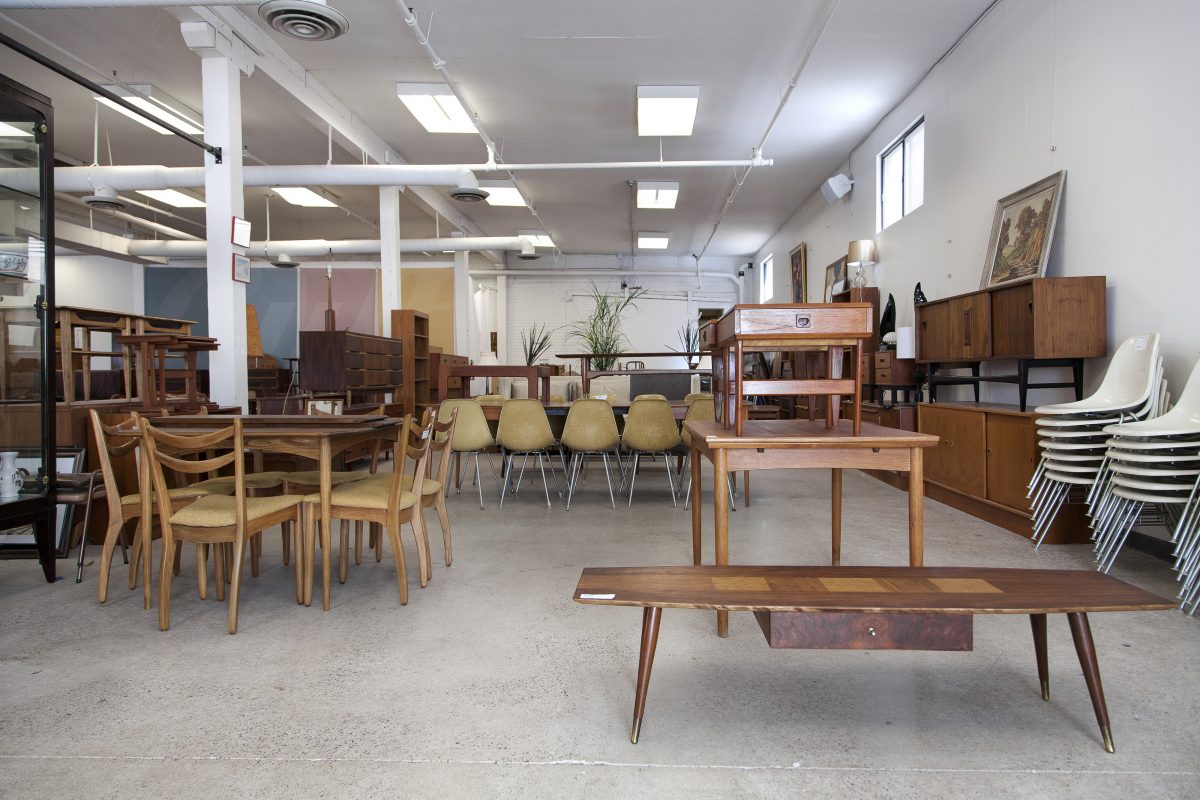 While furniture is his focus, it isn't all that Jakeman is applying his intuition to these days:

When I visited GUFF, the "things of that nature" also seemed to include a smattering of china, some small, anachronistic oddments such as cigarette and mustard tins, a bicycle, and a suite of armour tucked away in the back of the store. 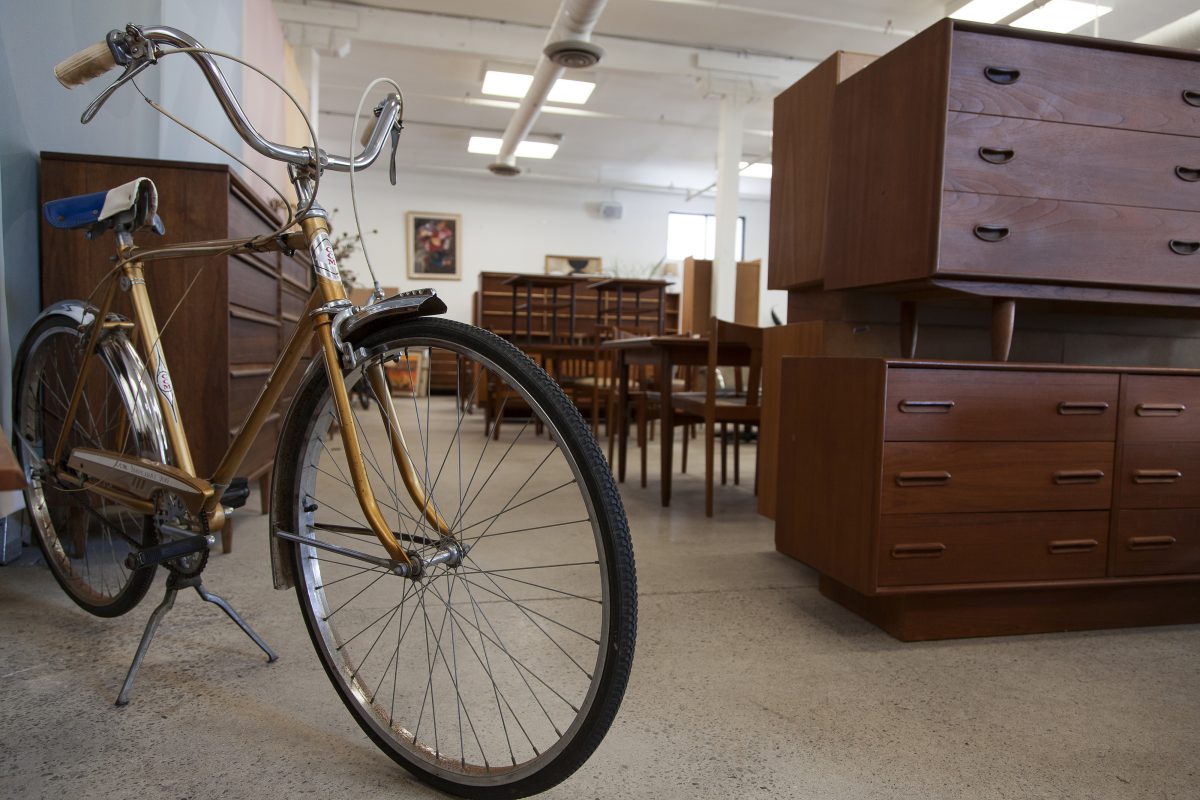 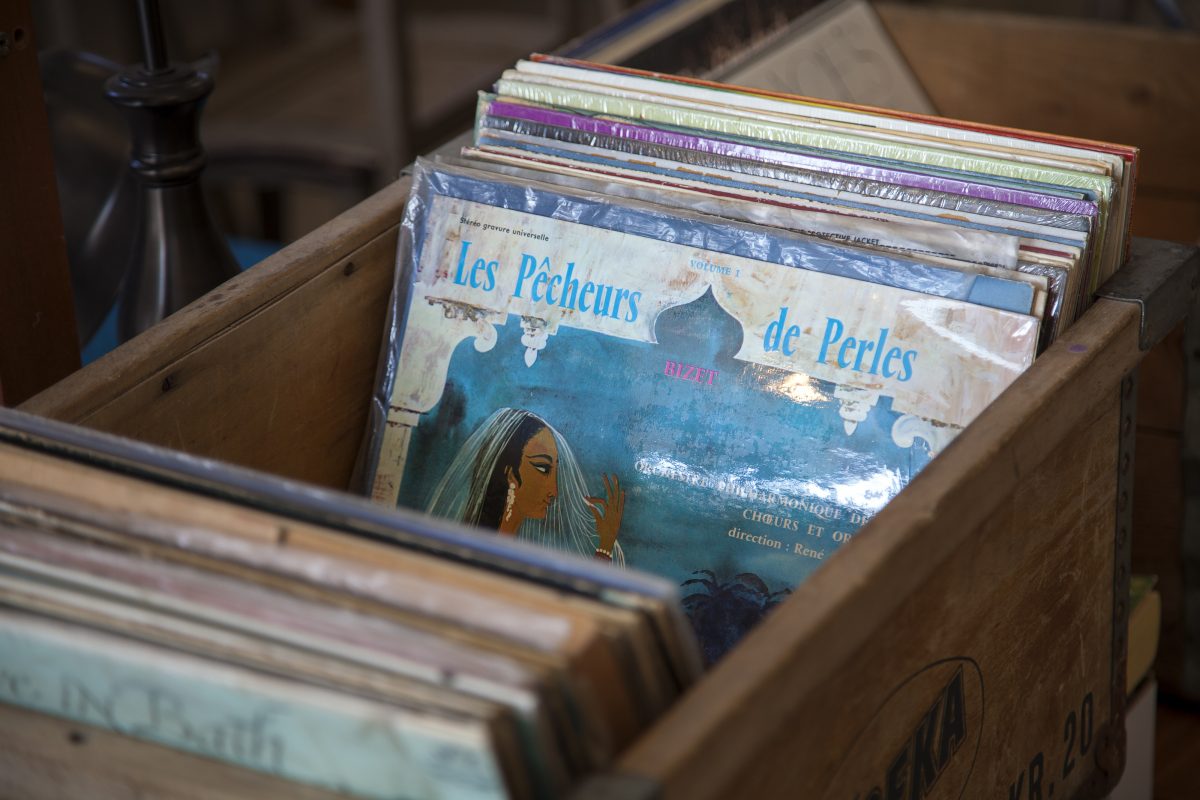 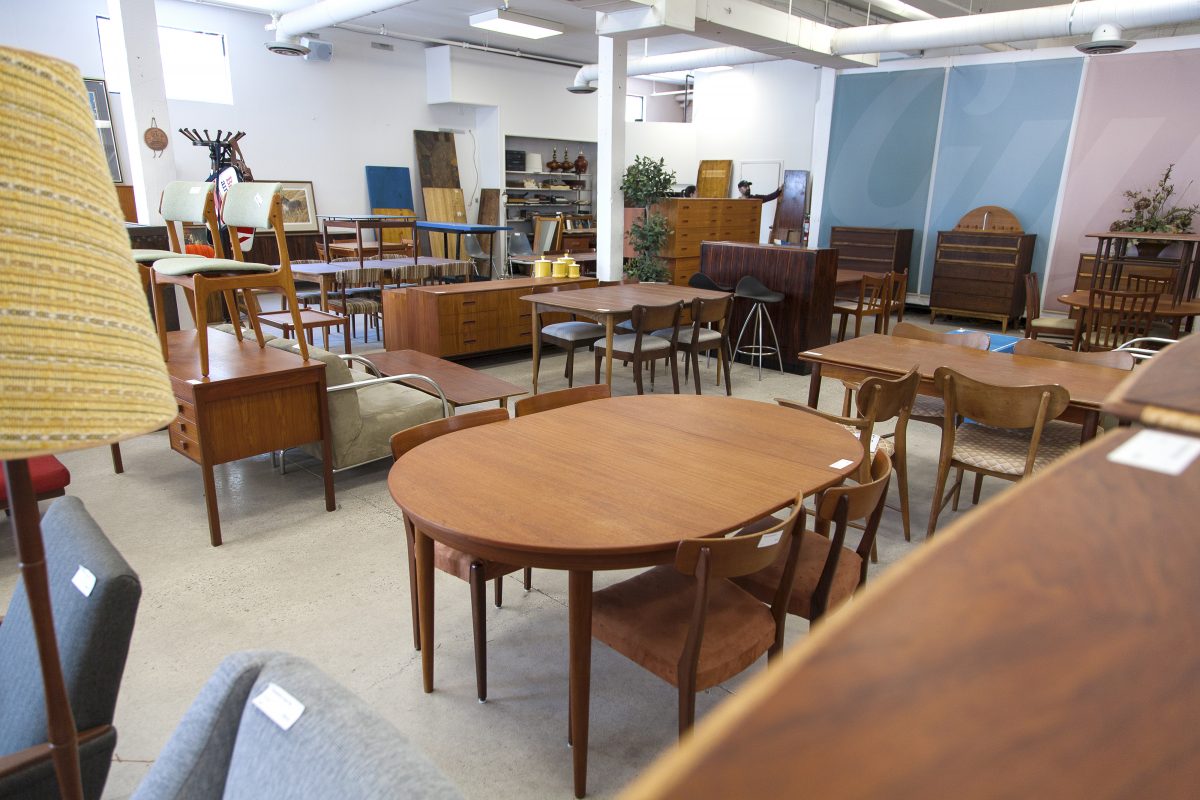 As if all this wasn't enough, a couple of years ago Jakeman and co. started dabbling in the creative side of their business. When I asked about the GUFF workshop, Jakeman explained:

We started doing what's called "industrial furniture". We would take old butcher block tables that came out of old factories and things like that, and we would clean it all up and manufacture a base ourselves, to make it sort of something suitable for a home.

These days, the custom work has largely morphed into refinishing (although one of Jakeman's employees apparently does still build his own small pieces), which is done both on-site – in the case of small, easy jobs – and by experts outside of the city in the case of bigger, more complex furniture. Jakeman estimated that at least sixty percent of his stock had been "completely" refinished.

Wherever it's done, refinishing is subjected to the whims of fashion and the current fashion, and Jakeman is always aiming for a natural look:

We basically strip all the old varnishes and things off of it to its natural wood. We do a lot of walnut, a lot of teak furniture, some rosewood... It usually has a thick stain on it when we first get it, but when you strip it right down you see the beautiful grains of the walnut underneath. And then we just refinish it with like a clear Danish oil so it has a real natural look to it. 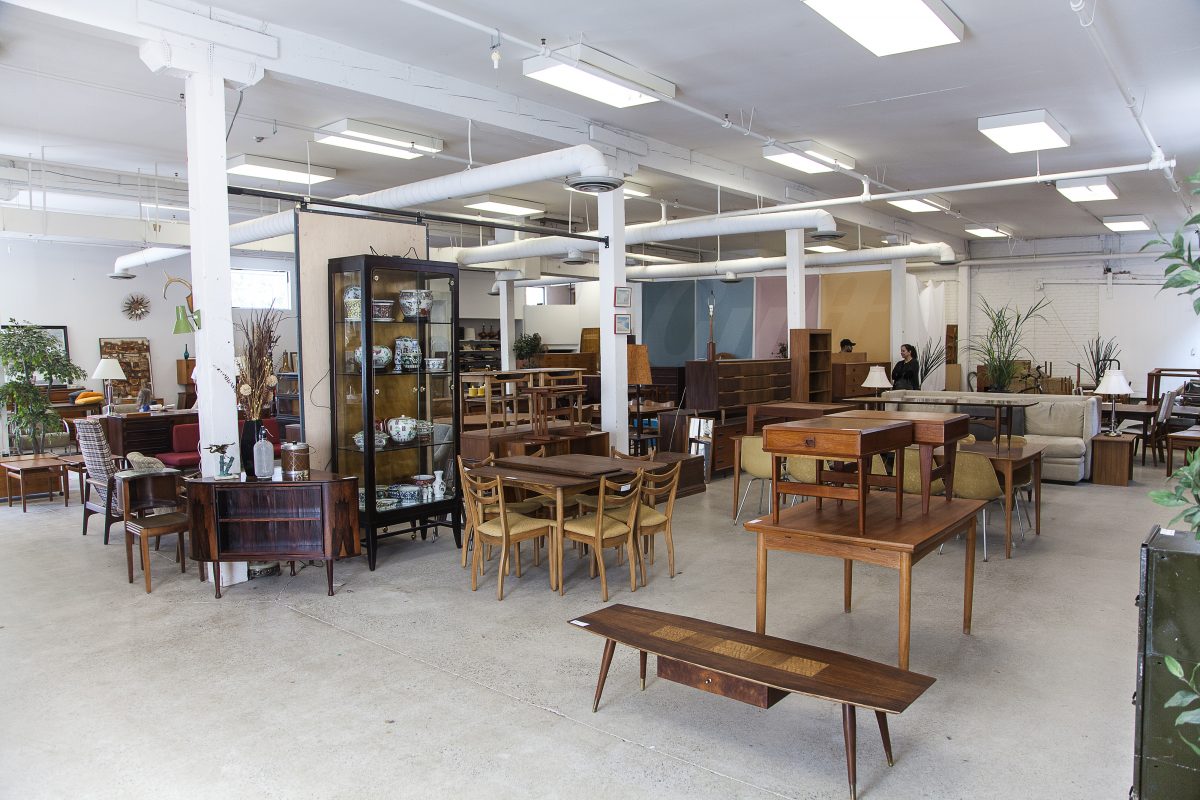 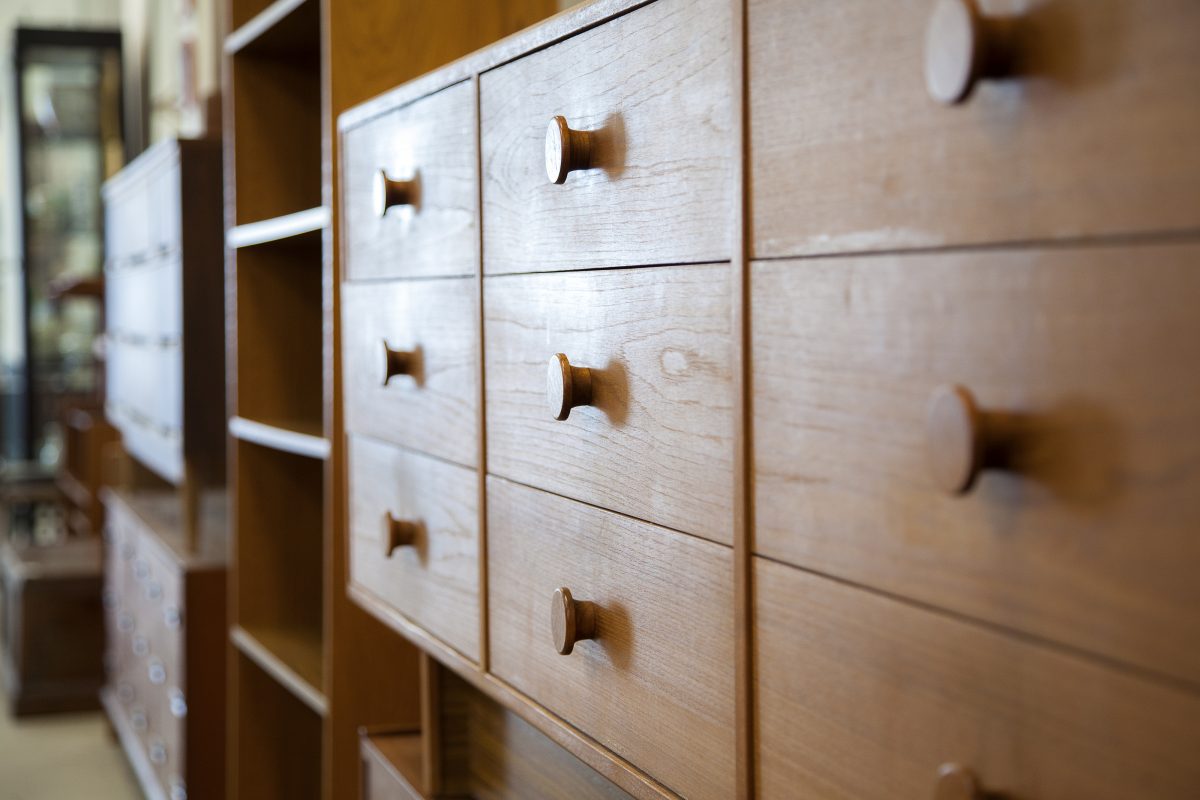 I asked Jakeman why he thought GUFF had managed to flourish for so long.

he said immediately, and then laughed:

That's really what it was starting off as a picker – I mean, you really have to hustle. And I think I did a good job building up relationships along the way. It's made it easier for me to find and get stuff over the years. We also try to keep our prices very competitive, and that's always been one of the strengths of our store, and what the customers appreciate. We try our best to deal in volume, and try to keep our prices down as much as possible.

One comment on “Vintage Furniture Stores in Toronto: GUFF”