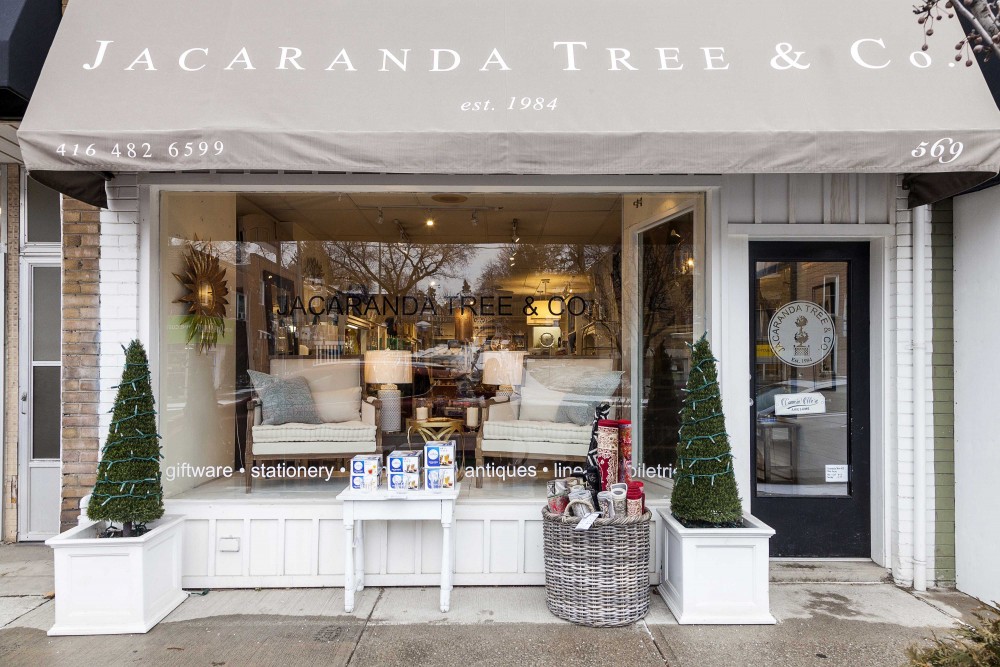 We just always stepped off the cliff and did what we felt we wanted to do. I think a lot of people in life don't walk off of the sidewalk.

Jacaranda Tree & Co opened in the March of 1984, in the face of "a gigantic snowstorm", which seems to have done little to quell the owners', Dianne Monkman and her late mother Megan, enthusiasm. Although neither women had a background in business, they did have flair and a fondness for antiques.

My mother had impeccable taste. We lived in England for a period of time and we went to all the antique shows. As a three-year-old I went to antique auctions, and so innately, we learned.

Over the years, the pair experimented with walking off several more metaphorical cliffs, including a second location, a mail-order business and custom-painting lamps. I don’t even know what to call the craft that had Monkman creating giant sculpted trees out of dried flowers for Eaton’s stores across the country, but whatever it is, they tried it.

For those wondering about the name, Jacarandas are spectacular flowering trees native to South America but now found all over the world from Australia to Miami. When applied to Monkman’s store, however, the name has less to do with botany than it does with family history.

My mother's mother lived in Nairobi and Jacaranda Tree was the name of her home. She was a very liberated woman, and her mother was a suffragette, so there's a strong lineage of women in our business. My grandmother later moved back to England and had a hotel named Jacaranda Tree. I only thought it was fitting that we use that name. 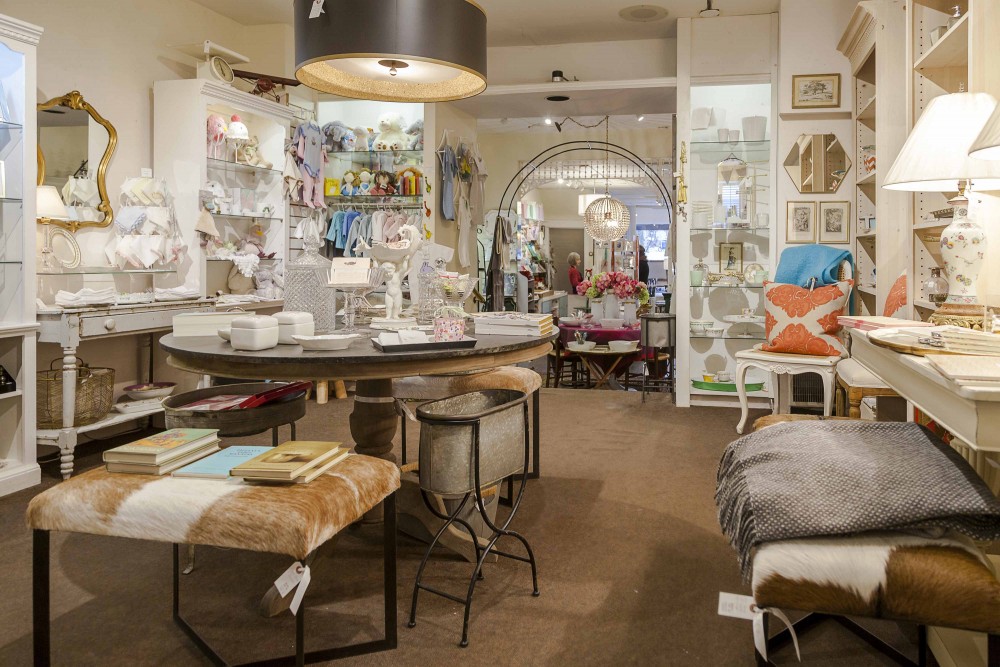 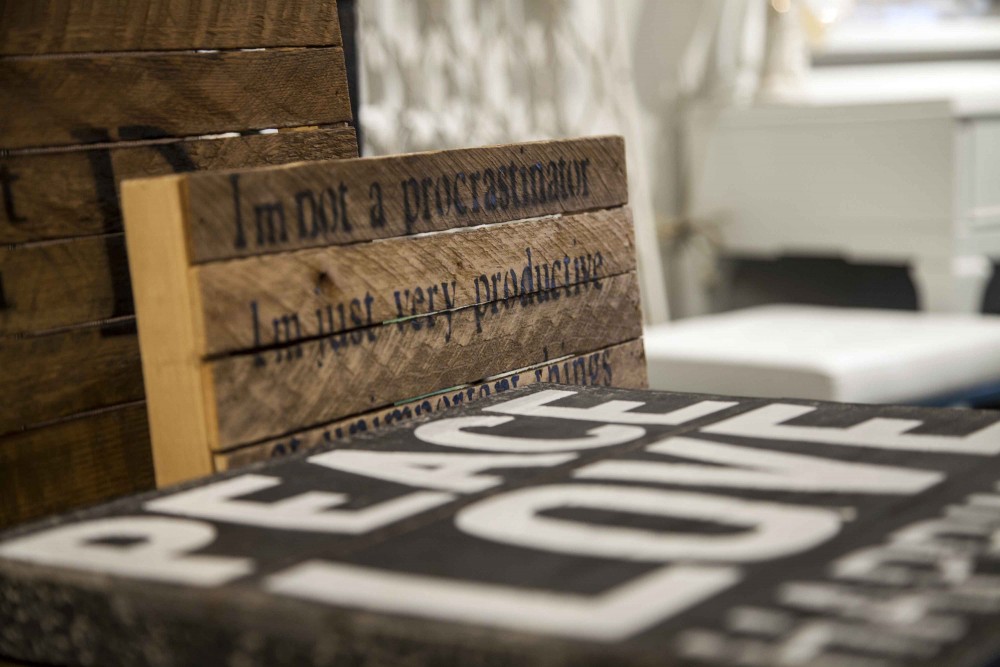 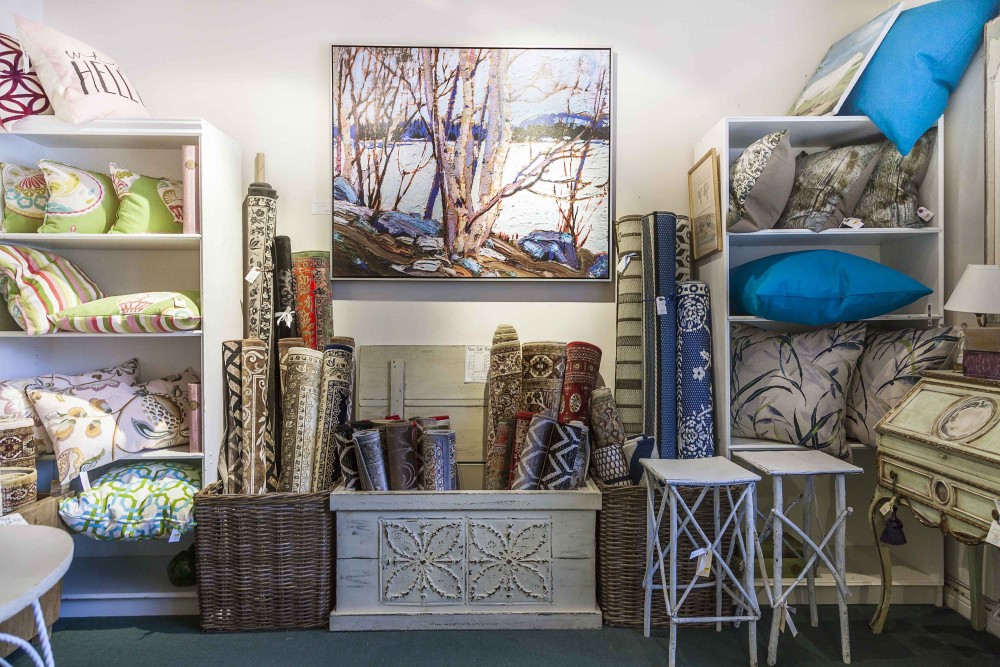 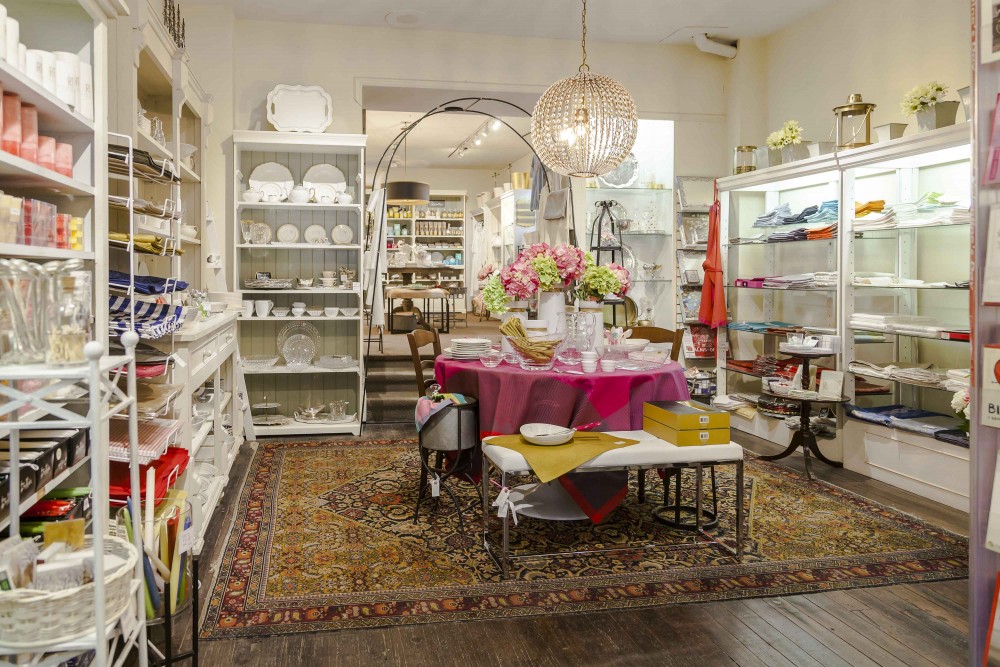 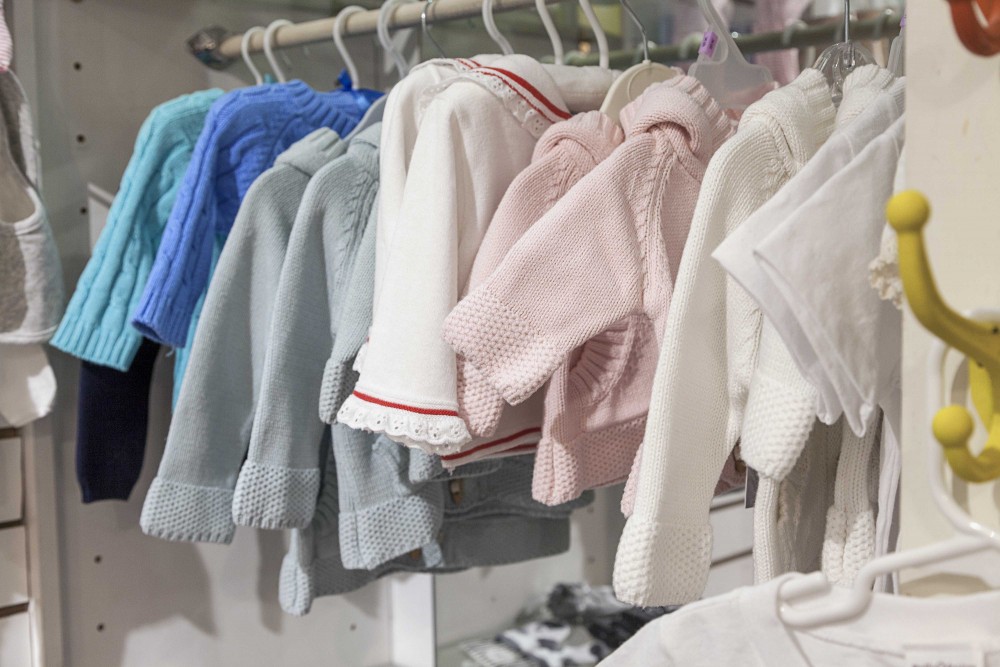 There's a bit of a high-end gift shop feel about the place (and indeed, it did win an Award of Merit from the Canadian Gift and Tableware Association back in 1991), but when I asked Monkman if there was any unifying theme or guiding principle to her selection of wares her answer was simply "it has to be awesome."

Beyond that criterion, there seem to be very few rules. Jacaranda Tree is based more on a mood than on particular product lines. The current incarnation of the Jacaranda Tree not only employs the next generation of this enterprising lineage (in the form of Monkman's daughter) but also manages to defy easy pigeonholing.

Yes, they do sell furniture, and yes, they do sell antiques, but most of the place (all two floors and about five rooms of it) is elegantly arranged with carefully chosen odds and ends that fall into neither category. In fact, they even carry a collection of exotic English condiments including Beet and Red Onion Marmalade.

I think that the experience here should be a complete experience. You walk through the door, you're happy. I mean, hopefully, that's it. People just come because they like the feeling of our store. There's a nice vibration in here. And I think our staff is amazing. Some have been here for twenty years, which is unheard-of in this industry. We just feel that we should cover all the bases - you can come here for a card, a gift, a bridal registry, decorate your home, pick up an antique and have it gift-wrapped, enjoy the experience and leave happy. We carry literally everything, we carry cards, we carry candles, beautiful toiletries, rugs, chandeliers, furniture, antiques, clothing. Just very specific, for the season.

Actually, stock not only changes by the season (Christmas is a particularly fun time to visit), but by the day.

We change our display's daily. Our product changes all the time. We have core things that we sell because we need to be reliable – cards, certain lines of china, Sophie Conran, which people collect. So we're mixing it up all of the time. It keeps it fresh.

This sounded exhausting to me, but Monkman, a self-proclaimed workaholic, seems equal to the task.

After so many years, you do have your reliable sources. And you weed people out, and you tend to go towards the suppliers that are good to work with, who are ethical and kind, who support other good things. I believe in all of that. And over the years we have gone to trade shows; Atlanta, New York, and at all of those, you build these connections. But funnily enough, people do find you. So we have unique suppliers that aren't at trade shows, that have come to us, and we have established wonderful relationships with them. 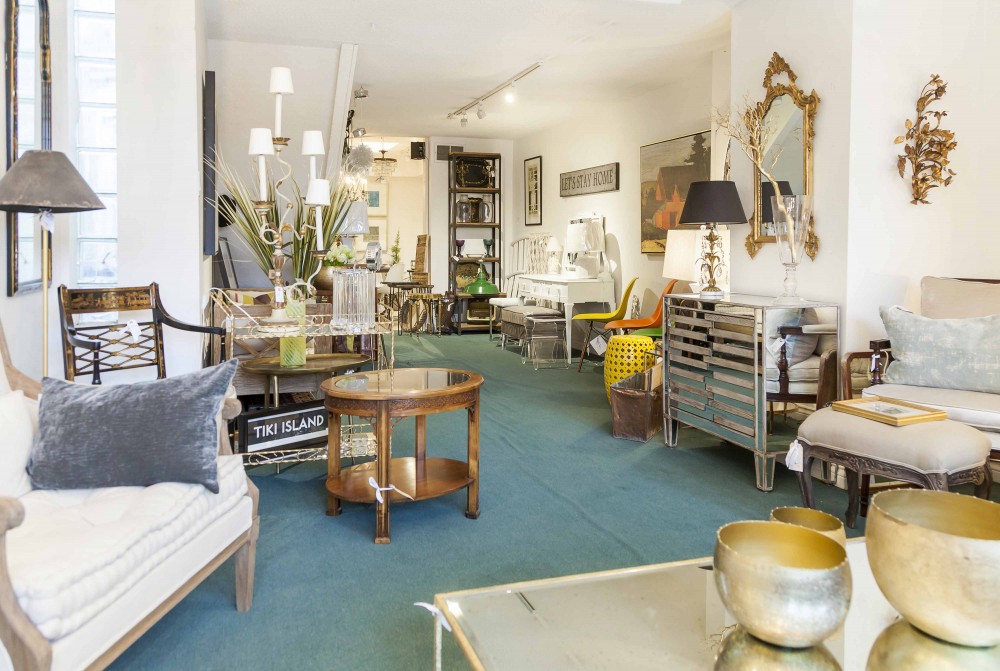 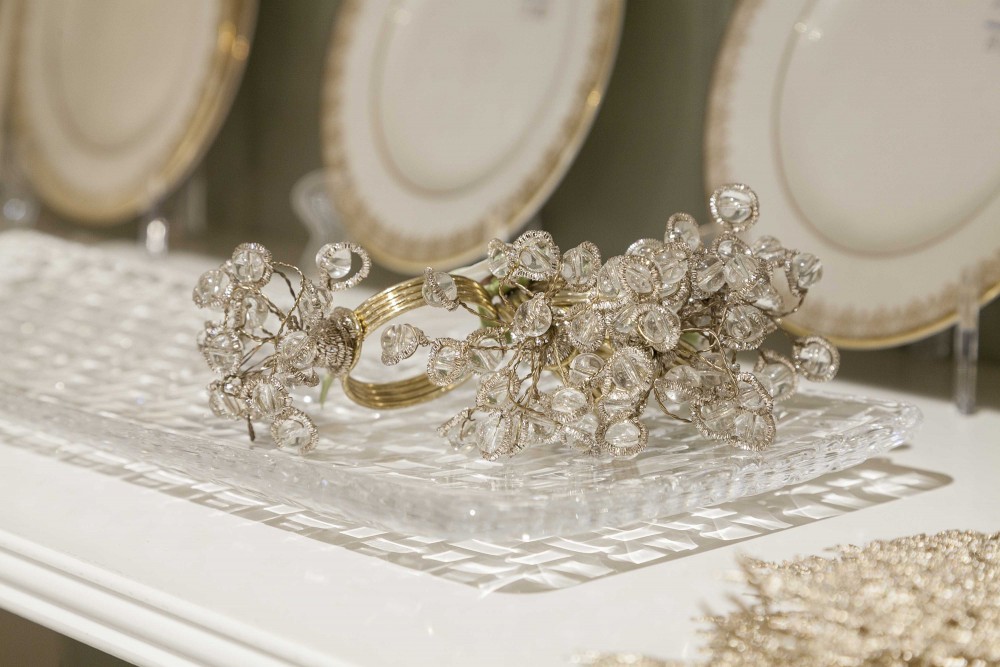 Given how she goes about selecting her wares, I asked Monkman if she enjoyed the never-ending hunt for new and interesting items.

It's an adventure. It's so exciting. Not only do we sell new things and import things from all over the world, we also sell antiques, so the whole experience is extremely exciting and adventurous. And the more you do it, the more you want to do it. It's a high, it's a rush, it's wonderful. I love it. 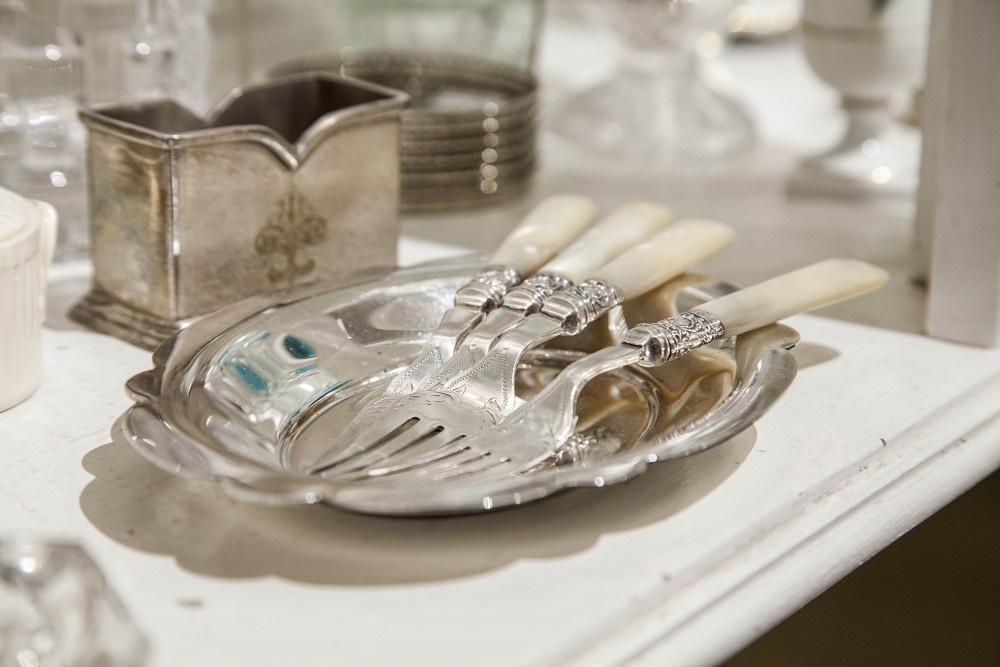 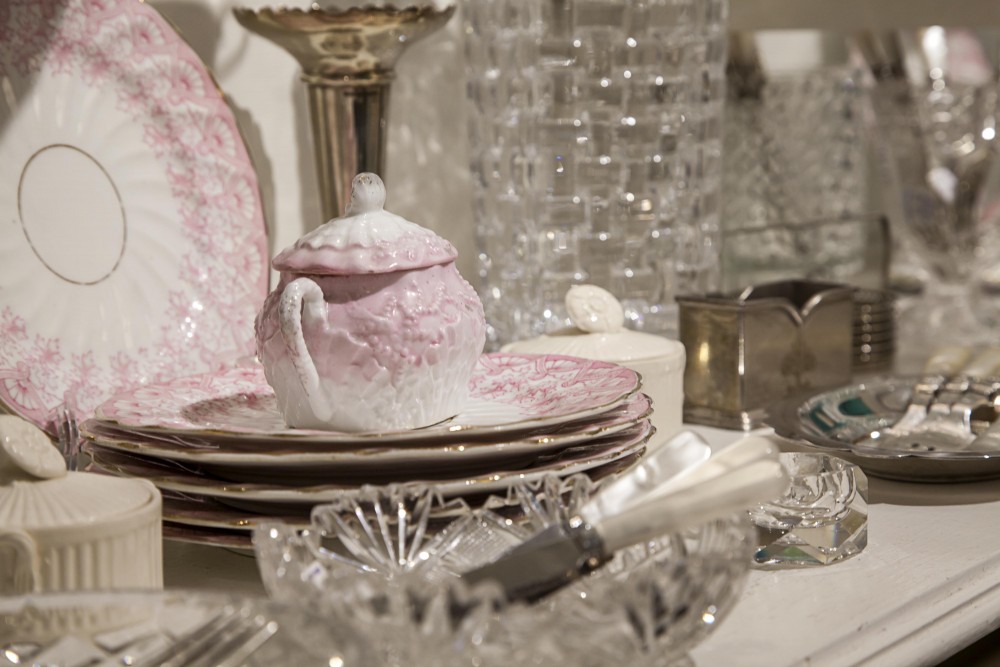 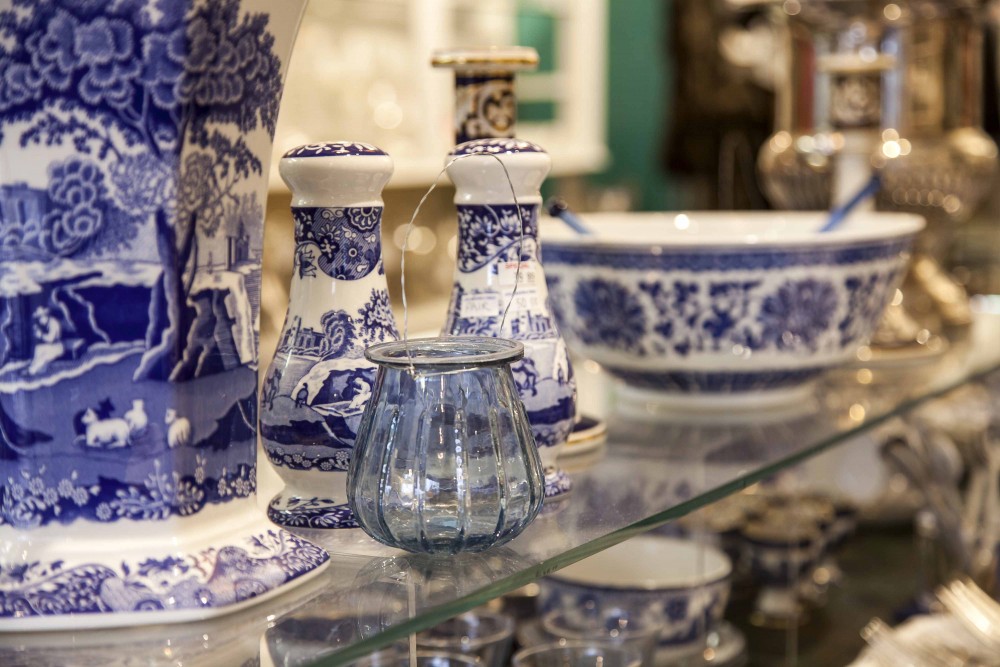 The moral side of this great adventure extends well beyond finding ethical suppliers. Monkman says they try to give back to the community by doing a fundraiser every year in her mom's memory. A portion of the proceeds of this annual wine-and-snacks open house fundraiser are donated to the palliative care Unite at North York General Hospital, a place "very near and dear" to Monkman since both of her parents spent time there.

Given its owner's care for the neighbourhood, it's not too surprising that Jacaranda Tree is, in Monkman's words, a "community store" with many, many repeat customers.

Most of the people who walk into the store, we know their names and they know us. I knew their grandmother and I now know their granddaughter because of that relationship that we have. If I don't have something, I send them to Wild Bird [a furniture and bird-feeder shop down the road]. We all work together as a community. And I don't think that you get that as much anymore.

To make your search through the Toronto's vintage and second-hand furniture stores a bit easier, we created a guide consisting our most favourites - with every single one store being a unique experience for different styles. Read The Best Vintage and Second-Hand Furniture Stores in Toronto guide here!