Canadian television has developed a strong reputation in the Hollywood scene, creating successful TV shows that have attracted viewers worldwide. We have reviewed some of the top currently-airing Toronto-featured shows below!

Flashpoint is a series about a fictional police unit called the Strategic Response Unit, based on Toronto's Emergency Task Force. This show is fantastic; I have yet to see a show in which every episode is so riveting, so tastefully created, yet so gut-wrenching. Set in downtown Toronto, the show manages to pull viewers into the professional and personal lives of its main characters while highlighting the challenges that emergency workers (paramedics, police officers, etc.) face every day. Flashpoint does an incredible job of combining action, romance, and personal adversity — all in the city we know and love.

Little Mosque on the Prairie

Little Mosque on the Prairie
Still from Episode 513

Now heading into its fifth season, Little Mosque on the Prairie has been praised for its innovation and passion. The show revolves around a Muslim community set in a primarily Christian, Anglo-Saxon town in the fictional municipality of Mercy, Saskatchewan. It's shot in Canada, predominantly split between Regina and Toronto. The show's promotional tagline "Small town Canada with a Muslim twist" hints at a major theme: the use of comedy to explore the interactions between Muslim and non-Muslim peoples while highlighting the diversity of each perspective. While the show went through a slump at one point in its third season, the fourth season has developed a very special storyline which is sure to re-hook viewers.

Being Erica -
Erin Karpluk as Erica,
Morgan Kelly as Brent,
Reagan Pasternak as
Julianne in Episode 301

Being Erica is a show shot in Toronto that is both creative and ingenious in concept. The show operates on the notion of "what if?" People often ponder what would happen if they could go back in time and correct a mistake. The show is about a woman in her 30s who is struggling to retain control as her life falls apart. She's approached by a therapist who has a magic ability to transport her back in time, giving her the opportunity to change her own actions or behaviour. This show not only embraces its Toronto location, but is also note-worthy for its creative concept and subtle insight into the human psychology. It forces the viewer to recognize that confronting the past, rather than trying to change it, is the only way to embrace the future.

Catered towards the younger generation, Degrassi and all of its subsequent spin-offs have been a huge hit with Toronto youth. Degrassi tackles some tough issues, including racism, suicide, censorship, school shootings, rape, abuse, and more. Despite raising these serious issues, Degrassi and its spin-offs have managed to develop a loyal following of young and adult viewers. While I would suggest some of the episodes can be contrived and unbelievable, the show is still commendable for addressing issues that urban youth must face.

With all the amazing "whodunit" series airing on television currently, it might surprise you that we suggest the new 2011 series King as a noteworthy program. But with all the macho masculinity peppering "CSI"-type shows, King has an unexpected twist: a strong female lead. A show that surprises you before even presenting a mystery is always a show worth watching! 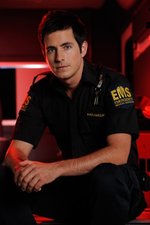 Craig Olejnik as Toby Logan
in The Listener

I had the pleasure of being on scene at the University of Toronto when an episode of The Listener was shot. This supernatural drama revolves on character Toby Logan, a paramedic who suddenly realizes he has the ability to hear people's innermost thoughts. While the show can become a little complicated, it's definitely an interesting watch.