How do you imagine your dream home? Several bedrooms, big yard, high quality material used, a fireplace, maybe a pool... Some people have different visions of comfortable living. Very different! 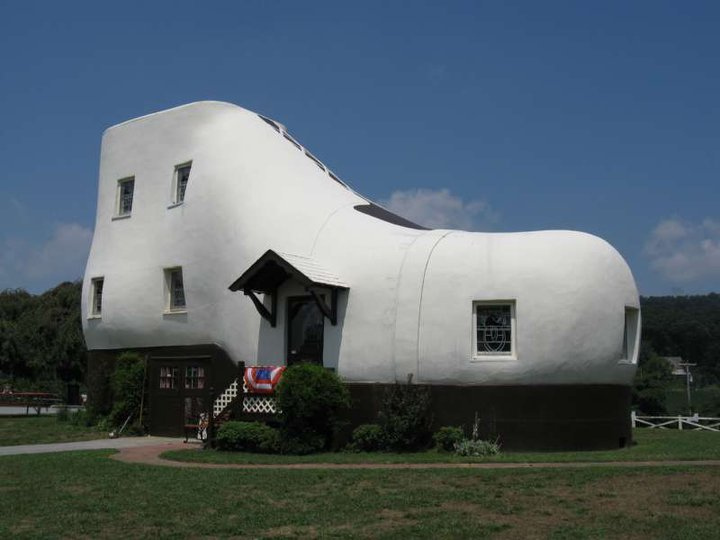 In 1948, the self-proclaimed "Shoe Wizard" a.k.a. Colonel Mahlon N. Haines walked up to an architect, handed him an old work boot, and said "Build me a house like this." Haines was a successful businessman. He built a shoe empire that stretched from central Pennsylvania to northern Maryland and owned over 40 shoe stores. The Shoe House was a giant advertisement for his shoe business, and he made it available as a vacation spot for elderly couples and lucky newlyweds to spend a romantic week in the shoe, served by a butler and maid! The house changed hands and business purposes several times and today, it is a tourist attraction. 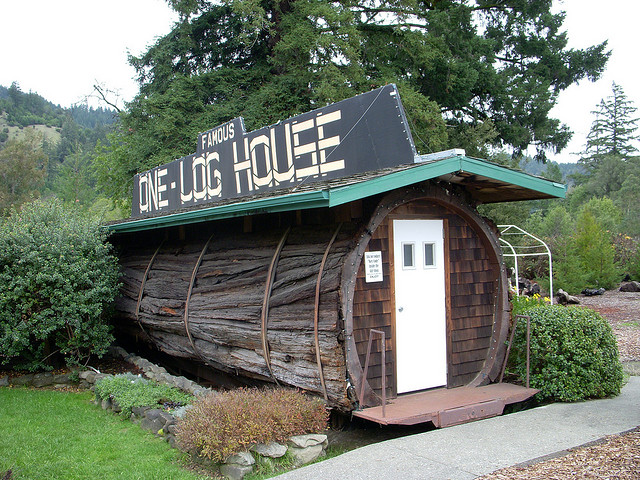 Can you imagine that this house is carved out of a single solid piece of wood? A man named Art Schmock and a friend hollowed it out of a giant redwood log. It took them eight months to do so in 1946, but they never intended to live in it permanently because they made it into a roadside attraction immediately. It's actually more of a mobile home than a house; besides the fact that it has its own wheels, the interior is furnished like a travel trailer. Nevertheless, you could live in it if you wanted to. It houses a kitchen, bedroom, living room, and dining room that are squeezed into its carved interior, and has a comfortable 7-foot ceiling. The log-house itself is 13 feet in diameter and 32 feet long, and weighs 42 tons, which is quite an astonishing number given that it has its insides removed. Both ends of the log have a door, one of which has two small windows—the log's only source of natural daylight. 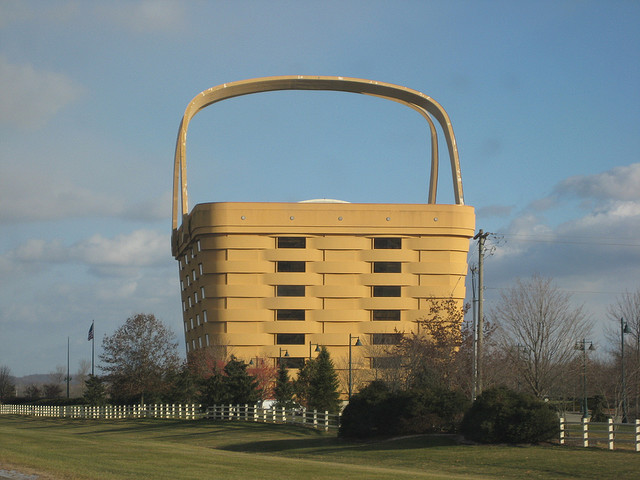 An example of Mimetic architecture, The Longaberger Basket Building is the world's largest basket, and it's in fact the seven-story corporate headquarters of the Longaberger Company. The building is a 160 times larger replica of the company's main product, the hand-woven party basket. It's 192 ft. long by 126 ft. wide at the bottom, spreading to 208-ft. long by 142-ft. wide at the roofline. It is a magnificent sight — especially at night. And it was not the first crazy idea of Dave Longaberger. His old HQ was a house-sized picnic basket – 23-ft. tall and 48-ft. long. 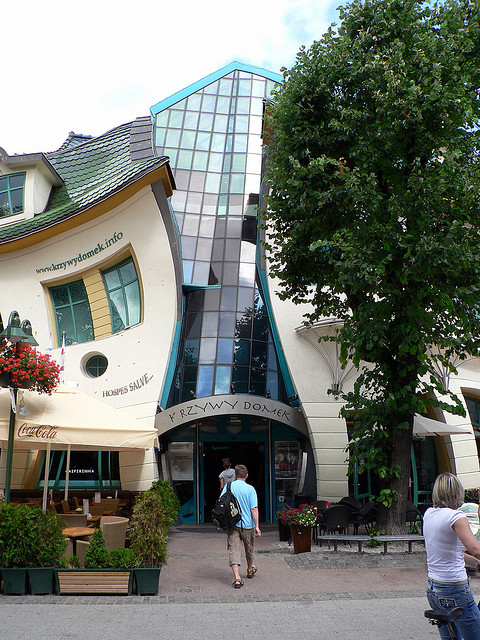 This extraordinary house which makes you feel dizzy when you're only looking at it is locally known as "Krzywy Domek" and was built in 2003. The strange architecture was inspired by Per Dahlberg's (a swedish painter living in Sopot) drawings which were far more crooked, anyway. The building is situated on the Bohaterów Monte Cassino street, which is the North Poland town of Sopot's most prominent promenade. It's a popular tourist destination and has a number of pubs and restaurants inside. 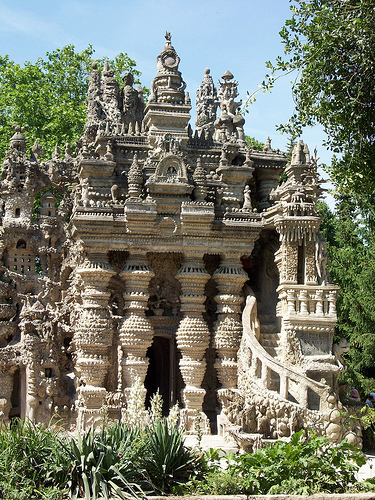 Ferdinand Cheval was a French postman who spent 33 years building Le Palais Idéal (the "Ideal Palace") in Hauterives, a work of great imagination. He worked 93,000 hours alone to accomplish this beautiful castle and to show that willpower could triumph over all manner of physical and mental difficulties. It is regarded as a great example of naïve art architecture. Cheval built the castle out of stones he picked up during his daily mail round and bound them together with lime, mortar and cement. The work is inspired by the Bible and Hindu mythology. A sign on the building says: "Touch nothing" and "Work of only one man". 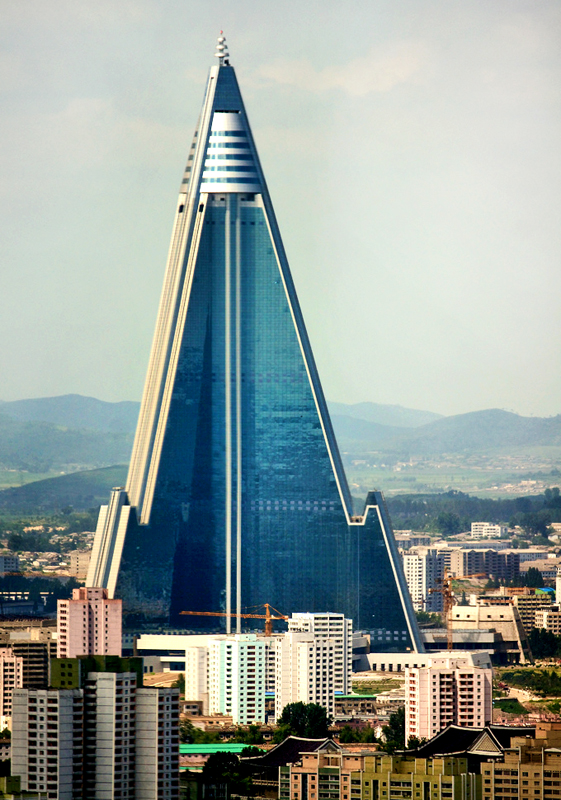 A building described as "The ugliest building on Earth" or "Hotel of Doom" is interesting mainly for it's story. The 105 storey Ryugyong Hotel's construction began in 1987 in one of the planet's poorest countries, the communist state of North Korea led by the personality cult leader Kim Jong-il. It's construction stopped in 1992 and the topped out bare building without windows, and by far the largest building in the country, stood for the next 16 years making Pyongyang's skyline look like a horror movie. The construction works on the ghost structure resumed in 2008 and the hotel is currently getting a far better looking facade from an Egyptian company.

7. Ontario College of Art and Design 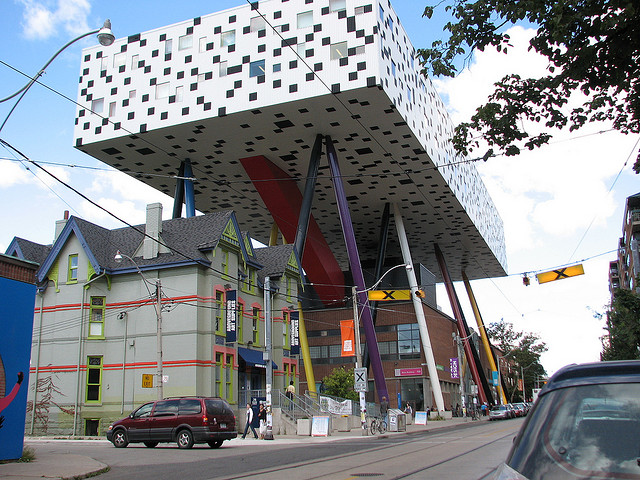 The only Canadian building in this list of the most strangest buildings is Ontario's College of Art and Design modern building. Also known as Sharp Centre for Design this mind-boggling building was designed by UK architect Will Alsop, in a joint venture with Toronto-based Robbie/Young + Wright Architects Inc and opened in 2004. It consists of a two-storey box four storeys off the ground supported by a series of multi-coloured pillars at different angles. The remarkable "table-top" superstructure, that takes the form of a parallelepiped (9m high, 31m wide and 84m long), with striking black and white pixellated skin, stands 26m above the ground. No wonder they call it "The university of imagination". 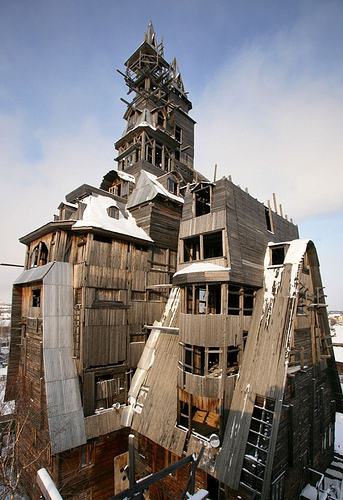 As a bonus to all these interesting structures I decided to show you a house, that doesn't exist anymore. The most bizarre wooden building in the world. The construction of this 13 storey, 144-foot-tall building was started by Mr. Sutyagin and his family in 1992 and continued over 15 years without any formal plans or building permit in the Russian city of Archangelsk. Some say, it was the tallest wooden house ever. Unfortunately, the builder and owner had to spend a few years in prison, so the incomplete house started to crumble. This wooden skyscraper was finally condemned by the city as a fire hazard in 2008 and pulled down by the end of 2009.