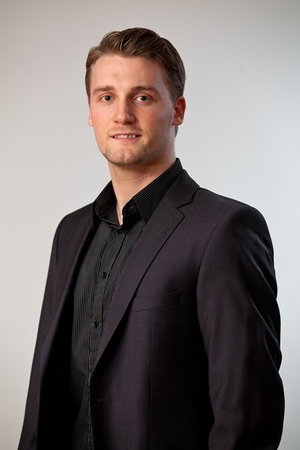 1. If you were a super hero what powers would you have?

"It might be a bit cliché, but teleportation...with the ability to bring people with me. I could get across the city everyday without having to deal with traffic on the Gardiner! I could spend my weekends on a beach in Fiji or on the slopes in Whistler with friends!"

2. What's the furthest you've ever been on holiday?

"Ashley and I spent almost three months in Thailand in 2008 to celebrate finishing school. We played with tigers; zip lined through the jungle, slept in a tree house 150 metres off the jungle floor, got in a nasty moped accident and were saved by Buddhist Monks! There are so many amazing stories and memories from that trip that we'll never forget."

3. Have you ever met any celebrities?

"I've met a few. But the most memorable was working as a Kellogg's cereal mascot when I met "The Great One", Wayne Gretzky. Unfortunately I was in costume as a giant cow at the time, so I'm not sure if it really counts!"

"That's a tough one to choose...but I think I have to go with the classic: Peanut butter and banana drizzled with honey."

5. What would be your dream car?

"1969 Ford Mustang Boss 302. Hands down. I have weird feelings for that car that people don't usually have for automobiles."

6. What was a nickname you had growing up (or still to this day)?

"First Name Mista, Middle Name 'Period', Last Name "T". And I pity the foo who don't buy or sell with the JKT!"