Both the average selling price, at $765,270, and the MLS® Home Price Index Composite Benchmark were up in August 2018 compared to the same month last year, by 4.7 per cent and 1.5 per cent respectively.

The average selling price increased by more than the MLS® HPI Composite due, at least in part, to a change in the mix of sales compared to last year. Detached home sales were up by double digits on a year-over-year percentage basis – substantially more than many other less-expensive home types.

Toronto Real Estate Board President Garry Bhaura said it’s encouraging to see a continued resurgence in the demand for ownership housing, with 6,839 sales reported in August 2018 – an 8.5 per cent increase compared to August 2017. As mr. Bhaura explains:

Many home buyers who had initially moved to the sidelines due to the Ontario Fair Housing Plan and new mortgage lending guidelines have renewed their search for a home and are getting deals done much more so than last year. In a region where the economy remains strong and the population continues to grow, ownership housing remains a solid long-term investment. 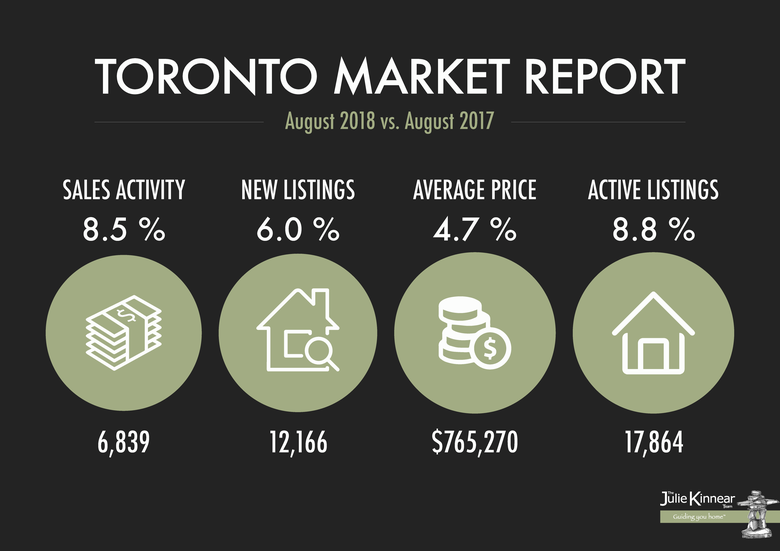 Jason Mercer, TREB’s Director of Market Analysis, talks about tight market conditions in the summer of 2018:

In August, the annual rate of sales growth outpaced the annual rate of new listings growth. We only have slightly more than two-and-a-half months of inventory in the TREB market area as a whole and less than two months of inventory in the City of Toronto. This means that despite the fact the sales remain off the record highs from 2016 and 2017, many GTA neighbourhoods continue to suffer from a lack of inventory. This could present a problem if demand continues to accelerate over the next year, which is expected.