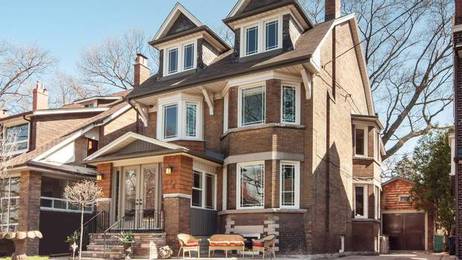 Nearly three dozen buyers scheduled private showings for this three-storey residence just a block east of High Park, while several dropped by public open houses. Like other properties nearby, this one sold in a fierce bidding war between two buyers.

This more-than century-old brick house preserves four fireplaces, wood trims, wainscotting and beamed ceilings in areas like the fireside foyer and dining room, but also bears sound structure with windows, roof, mudroom, kitchen and all but one of four bathrooms redone after 2005.

The main section of the 3,310-square-foot space contains formal fireside living and family rooms, six upper bedrooms, a second-floor office and third-floor crafts room with a skylight and kitchen.

The 1,160-square-foot basement suite has a bedroom, recreation area, kitchen and separate exit.

A long driveway and two-storey garage with a new door completes the 40-by-130-foot lot.

"It was a big, classic house on one of the premier streets in the area with a nice big lot and private driveway, which don't come by very often, just on that street,"

"It had a nice feel, nice flow and lots of potential, and it's very livable now.

"You're literally one block from the park and the subway,"

"It's in a great school district and a lovely, old neighbourhood you want to stay in."