Even though the comic book world is largely dominated by authors from the United States, there are also many Canadian artists who have created and still create great comic books and memorable characters. Check out some of the names that we chose and let us know about your ideas. Here’s the list of the top Canadian comic book creators by Julie Kinnear.

Joe Shuster is one of the most legendary comic book creators of all time, best known for introducing Superman, together with writer Jerry Siegel. Shuster was born in Toronto in 1914, but when he was nine, his family moved to Cleveland, Ohio. Here, he got to know Siegel, an avid science fiction fan. The duo started their cooperation.

Superman first made it big after both authors started working for National Allied Publications (now DC Comics) and the story was chosen as the cover feature for Action Comics magazine, with national distribution. Overnight, Superman became a great hit and one of the most popular American icons was born. 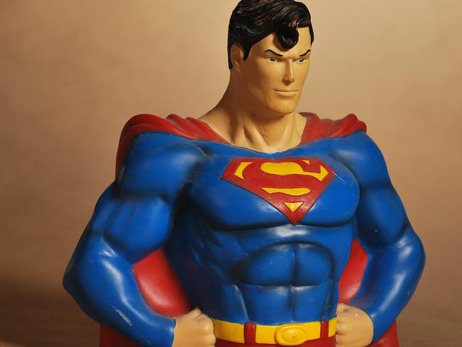 Even though Shuster and Siegel continued with Superman stories for years, the success story was hampered by the creators’ growing resentment about the contract conditions and the profits that DC-National earned off their character. At the time, the common practice was that the creators signed away all rights to a publisher. Allegedly, the duo received only $130 when they came up with the idea of Superman. After years of dragging attempts to sue the company for recognition and royalties, Shuster grew bitter and decided to leave the comics world for good. (The pair's biggest success was getting their names as creators on the products and an annual stipend of $35,000 — a fraction of what they actually deserved.)

Besides Superman, Shuster co-authored such titles as Slam Bradley, Radio Squad, and Doctor Occult. He died in 1992, and in 2005, his legacy was honoured by the Joe Shuster Awards, which annually recognize achievements in the comic book field by Canadian creators, publishers, and retailers.

Fun fact: Did you know that Superman was originally created as a villain with super powers in the short story called "Reign of the Superman"? It was only later that Schuster and Siegel decided to turn him into the good guy we all know and love. 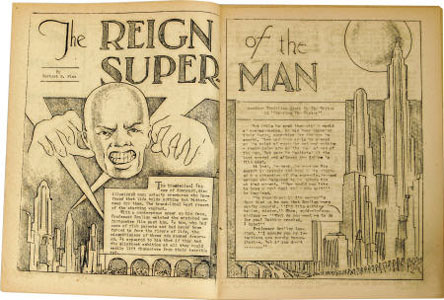 Reign of the Superman by Joe Shuster and Jerry Siegel

Rand Holmes is probably the most recognized underground cartoonist, whose works were nothing short of revolutionary in their time. His style reflected crude drawings of the alternative arts scene. However, he managed to provide added value through his spicy political wit and clever yet provocative story lines. 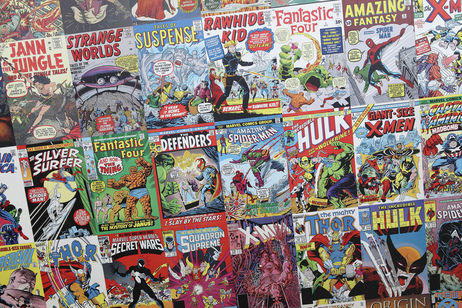 Holmes was born in Nova Scotia and taught himself to draw during his teenage years by copying Wally Wood comics (the impact of the series can be traced throughout his work, inspired by its finely textured style). In 1968, Holmes moved to Vancouver, enchanted by the counterculture of the hippie era that included drugs, free love, and a search for personal philosophy. Here, he developed his iconic character Harold Hedd and became a star cartoonist at the legendary underground newspaper The Georgia Straight. Harold Hedd is a hippie and a true spokesman of the 1960s counterculture — a longhair who tries his best to avoid work and spends his time chasing sexual adventures and getting stoned. The comic series also touched on political issues and showed support for the nascent environmental movement.

Besides Harold Hedd, Holmes contributed to several underground comic magazines such as White Lunch, Slow Death, Snarf, and Fog City. In the 1980s, he published Wings over Tijuana and his longest story, Hitler’s Cocaine. He also created a series of pornographic cartoons for the sex tabloid the Vancouver Star. 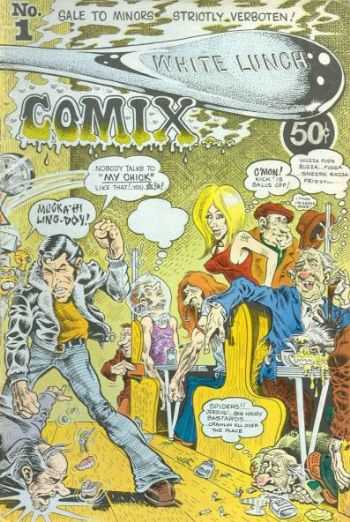 In 1982, Holmes left Vancouver and moved to Lasqueti Island in the Straits of Georgia, where he spent his time drawing and painting until his death in 2002. In 2007, Holmes was inducted into the Canadian Comic Book Creator Hall of Fame.

Gerald Lazare was born in 1927 in Toronto and he soon realized that he wanted to become a professional artist. Still in high school, he started cooperating with Bell Features publishing house and created legendary comic strips known as the Canadian Whites. The great reception of his stories prompted Lazare to drop out of school at the age 16 and open his own studio together with several other kids who dreamt of making it big in the comics world. 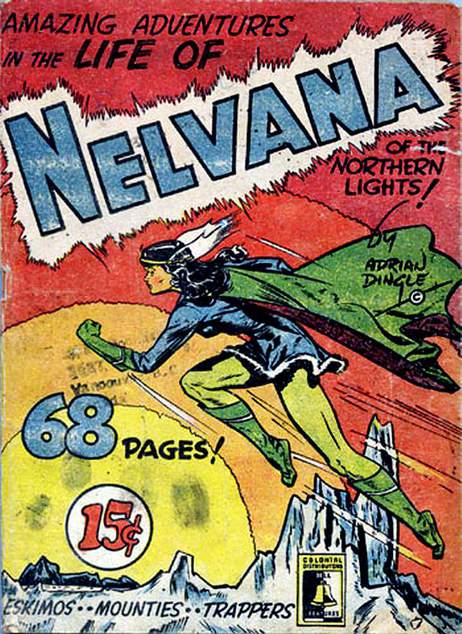 Nelvana of the Northern Lights

Experts point out that the temporary success of young Lazare can be partially attributed to the embargo on popular comic books from the U.S. during WWII, which enabled a boom of Canadian stories. After the war ended, he found himself out of job and decided to take up an apprenticeship in a Toronto commercial art studio. Later on, he became a student of his biggest idol, Al Dorne. After he got married, Lazare toured Europe. He became so enchanted with the charm of England that he decided to settle down in London for some time. Here, he started working as a professional illustrator and experimented with painting and sketching in his free time.

After he returned to Toronto, he started working for basically all major magazines in Canada, illustrated and designed books, and helped with several TV productions. He also earned credit as a fine artist and a creator of murals and historical paintings for museums and governments in the U.S. In 2007, he was inducted into the Canadian Cartoonist Hall of Fame.

Dave Sim rose to fame with his comic book Cerebus the Aardvark. This revolutionary artist started publishing the comic in 1977 and vowed to complete 300 issues. He finished the work in March 2004, and the story was 6,000 pages long by that time. In the beginning, Cerebus was intended as a parody of Conan the Barbarian and similar comics, but Sim soon realized the potential of his new character and turned the series into a self-complete work. 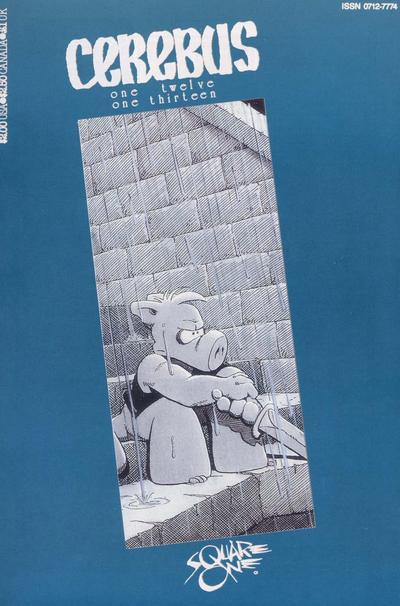 The full plot isn't easy to summarize, as the aardvark takes on a number of different characters, including a barbarian, the Prime Minister, and even the Pope. It’s also important to note the development in storytelling, as Cerebus the Aardvark has evolved from being quite a straightforward parody to a more serious social commentary on topics such as power and politics, spirituality and religion, and gender — the transformation process even earned its own nickname, "Cerebus Syndrome." Besides the Cerebus series, Sim is known as the author of Glamourpuss, which deals with the history of photorealistic comics, and Judenhass, about the Holocaust. He has won several awards for his work, including the Harvey Award, Kirby Award, and Joe Shuster Award. In 2006, he was inducted into the Canadian Comic Book Creator Hall of Fame.

Sim is also famous as a proponent of creators' rights and self-publishing. He is one of the authors of the Creators’ Bill of Rights and a vocal critic of copyright, since he believes it restricts free creation. He has even made arrangements to ensure that his work will become public domain following his death. Concerning his public image, many have accused Sim of being a misogynist. He himself proclaimed his anti-feminist and anti-liberal views in one of the Cerebus stories. Sim’s religious views have also undergone major changes over the years, as he moved from atheist secular humanism to his own synthesis of Abrahamic religions, following his study of the Bible and the Qur’an in 1996. It's no wonder Cerebus has changed so much over the years!

Richard Comely was born in England in 1950, but his family relocated to Canada when he was a small child. He started professionally working in a comic as a teenager, but his big success came with the appearance of Captain Canuck in 1975. Comely co-authored the biggest Canadian superhero together with cartoonist Ron Leishman and published the original stories under his own Comely Comix publishing house (CKR Productions took over later).

Captain Canuck has been presented in three different incarnations in his iconic maple-leafed costume. The first character, Tom Evans, is a Canadian secret agent in the futuristic world of 1993 (ha-ha) who possessed superhuman powers thanks to his contact with extraterrestrials. To this day, Tom Evans remains the most popular and (as some might say) the only genuine Captain Canuck. In 1993, Comely came with a new captain Canuck, Darren Oak, who tried to stop a global conspiracy. The third of the series was introduced in 2004 and featured RCMP Constable David Semple, who fought a gang called Unholy Avengers. In 2005, Canada Post paid tribute to Captain Canuck by putting the character on a stamp. Comely has also announced that he plans to develop the comic series as a feature film, but as of now, there are no known details connected to the production.

After Captain Canuck, Comely created Star Rider and the Peace Machine and actively pursued his work as an illustrator, designer, and lecturer. He's also known for his family life. He has eight children and is a vocal supporter of the Mormon community.

Who do you think are the best Canadian comic book creators? Let us know in the comments section.