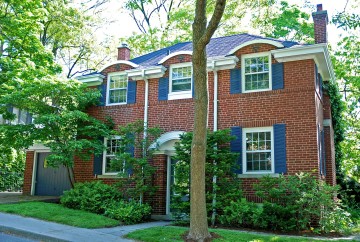 Excerpts From Friday's Globe and Mail

This detached, two-storey house sold quickly mainly based on the wealth of nearby urban conveniences and natural surroundings.

The previous owner - like many neighbours - was a long-time resident on the short street, which is close to local eateries, businesses and live theatre along Bloor Street West, as well as nearly 400 acres of parkland.

The street only has a dozen or so homes.  They rarely come up for sale because of their ... fabulous setting and location.

The pie-shaped lot is also set on higher grounds than adjacent homes and filled out with gardens and mature trees.

"You really don't know that you're still in the city, because you're just immersed in these beautiful huge trees ... and you can actually see High Park," the agent says.

"It's so serene and tranquil that you forget that everything you need - like the subway, library and shops - are all within a five-minute walk."

The house was built about 80 years ago with a three-bedroom plan, though two bedrooms were combined to create a large one with access to a deck.

Rounding out the upper level is a second bedroom with his and her closets, and one of two full bathrooms.

Hardwood floors are in most areas, such as the living and dining rooms. The former features a wood-burning fireplace, and the latter was decorated with wainscoting.

The kitchen has a breakfast area and a walkout to the main deck.

The lower level is "completely above grade" with an extra bedroom, fireside recreation room and office with large windows and a side door to the patio.