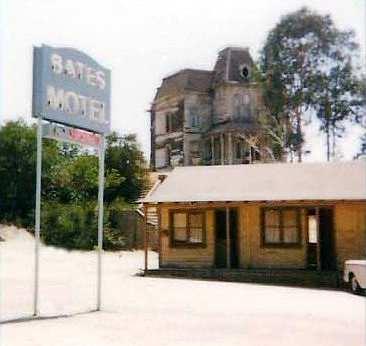 What can be considered the most famous movie house? You may have a different opinion, but I believe it is the one featured in the 1960 classic, Psycho. The house and motel featured in the movie Psycho was constructed in the '60s and made using pre-existing features in the Universal Studio backlot. Since then, the Psycho home has been moved several times and now rests between other prop homes used in films such as How The Grinch Stole Christmas and War of the Worlds. Through the years, the two-wall faux home has been remodelled extensively to take on a new life. The prop house can still be viewed by the public via the Universal Studios tour.

The Addams Family is a staple for American culture. Their home has been displayed across millions of TV sets around the country. In the first season, the exterior shot of the home was an actual house located in Los Angeles, California. Unfortunately, the house was later torn down, and a painting replaced it in the second season. The famous plate on their iron fence, which read "Beware of Thing," easily brings back memories of the home. Who could forget the bodiless hand or the mounted swordfish head with a leg hanging out of its mouth? These weird and creepy antiques were part of what made the series so successful.

The X-mansion is famous from the X-Men cartoon as well as the motion picture. The mansion not only serves as the home of Xavier but also as the training centre of his mutant teenage pupils. The epic mansion contains the infamous Danger Room that houses Cerebro. In the 2011 movie X-Men: First Class, the X-mansion was shot at Elizabeth Manor, which is located in Berkshire, England. This mansion is the dream house of any comic book fan or technology lover.

"My Golden gun against your Walther PPK." The iconic quote was featured in the 1975 classic James Bond movie Golden Gun. The movie also showcased a magnificent house owned by the extravagant hit man, Scaramanga. The island home was built into the side of a small island and was powered by the highly sought-after Solex Agitator. The actual island is real and called Khao Phing Kan, located on the west coast of Thailand. The actual house was never built on the island; however, through Hollywood magic, moviegoers were led to believe so. The house also featured the memorable playhouse where Scaramanga untimely led his challengers to duel.

When Stuart Little premiered in 1999, young children across the country dreamed of having their own talking mouse. Stuart Little is adopted from an orphanage where he takes residence in a brownstone style New York City residence that is tightly squeezed between two large office buildings. The interior of his new home is decorated in a resonance style, complete with checkerboard tile and a hidden door in the foyer. The living room is also equipped with an elegant stone fireplace, another piece that adds to the elegant ambience. Some of the most memorable pieces of the movie include all the mouse-sized features, such as Stuart's bathroom mirror and sink. How wouldn't love to have a talking mouse brother?

If you grew up in the 1990s, you have undoubtedly seen the classic Mrs. Doubtfire. The 1993 comedy features Robbin Williams dressed in drag posing as a nanny. The movie won Best Makeup, as Robbin Williams get-up took over four hours to prepare. The exterior of the house is a Victorian Painted Lady style, and the home is located in beautiful San Francisco. However, for the interior shots, they constructed a mock home in a Bay Area warehouse. The interior of the house is a timeless Victorian style that even today is not considered outdated.