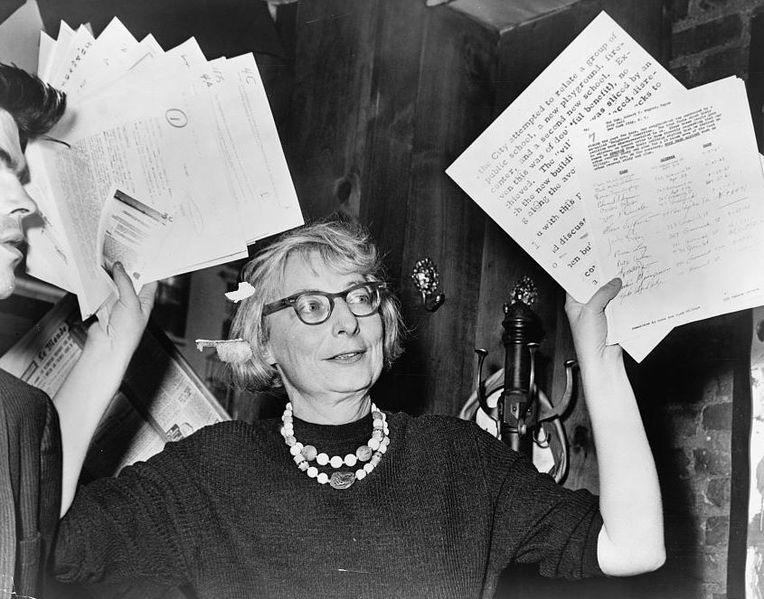 Born in Pennsylvania in 1916, Jane Jacobs gained recognition in both the United States and, later, Canada, as a writer and activist, focusing primarily on urban development and planning policies. Although she was never formally trained in architecture or urban planning, many of the insights set out in Jacob's most famous work (The Death and Life of Great American Cities, published in 1961) are still studied and even taken for granted today. In direct opposition to the 'top-down' planning styles popular at the time, Jacobs advocated diverse, dense, multi-use neighbourhoods with sidewalks and strong local economies.

An emphasis on people over cars led Jacobs into urban activism, opposing plans to build the Lower Manhattan Expressway through New York's Greenwich Village. The success of Jacobs and like-minded advocates in stopping the expressway played a role in the downfall of New York City Parks Commissioner Robert Moses and represented a power shift in favour of New York communities. Jacob's ideas were also important challenges to the popular practices of high-rise housing and 'slum-clearing.' Eventually, The Death and Life of Great American Cities came to have a wide influence, especially in Toronto, where Jacobs and her family moved in 1968, and where she continued to be involved in city planning. She also played an important role in stopping the construction of the Spadina Expressway.

Unconcerned with 'official' credentials, Jacobs refused numerous honorary degrees, but wrote several more books, including Economy of Cities, Systems of Survival, and The Nature of Economies. She lived at 69 Albany Avenue in the Annex neighbourhood of Toronto until her death on April 25th, 2006.