In today's post, we take a look at five famous homes where music history was made. Check out the story of Kurt Cobain's home in Seattle, a lake house that belonged to Johnny Cash, young Pink Floyd members' North London home, and the cottage of 25-year-old Bruce Springsteen as well as Elvis Presley's legendary mansion, Graceland.

Kurt Cobain, the lead singer of Nirvana — probably the most influential band of the 1990s and the grunge era — lived in a home located one block up from Lake Washington in the Leschi neighbourhood of Seattle. Even though the house is currently valued at approximately $5.75 million USD, it doesn't seem like a place for a rock star. On the contrary, it's mostly covered by trees and lush green in the yard and looks like an ordinary middle-class family home, reflecting the modest lifestyle connected to grunge culture. 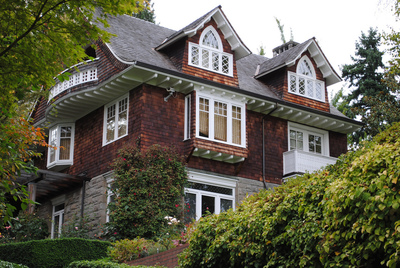 The Seattle home is also the place where Cobain spent the last moments before his death in 1994. The body of the troubled singer was discovered by an electrician, who came over to install a security lighting system and found Cobain lying in the greenhouse above the garage. Ever since, the site has been used as a memorial for thousands of visitors who come over to pay tribute to Cobain's legacy. Fans write their messages for Cobain on a fence bordering the property and benches in Viretta Park, located next the house. Every year, there's a gathering held in front of the house on the anniversary of his death.

Currently, the house belongs to unknown owners, who purchased the property in an auction that took place after Courtney Love (Cobain's partner) stopped making payments for the house and lost the ownership rights. The new owners installed a new fence and security cameras, but they don't seem to mind fans' pilgrimages.

The 13,800-square-foot home at Old Hickory Lake, Tennessee, made it into the history of country music as a sanctuary for Johnny Cash and the place where he wrote many of his famous songs. Most of us remember the building from the Cash biopic Walk the Line with Joaquin Phoenix. 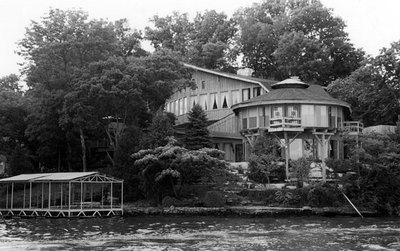 Cash lived here together with his wife, June Carter, from 1968 until their deaths just a few months apart from each other in 2003. Cash allegedly fell in love with the house as soon as he saw it and persuaded its builder, Braxton Dixon, who originally designed the building for his own family, to sell it to him. The spectacular three-storey house had large windows that overlooked the lake, round rooms, seven bedrooms, and a big garden surrounding the property. The house's unusual design has led some people to believe that there never was an actual blueprint for the structure. It was supposedly created simply with a freestyle building process by Dixon. Soon, the place was overflowing with life and some of the biggest icons of 20th century music history visited the house regularly.

"So many prominent things and prominent people in American history took place in that house — everyone from Billy Graham to Bob Dylan went into that house,"

said singer Marty Stuart, who lives next door and was married to Cash's daughter, Cindy.

After Johnny Cash passed away, the house was purchased by Barry Gibb (former Bee Gees member) for $2.3 million USD. However, before he managed to move in with his family, a fire destroyed the place completely in 2007. Even though the firefighters arrived within minutes, the building was already immersed in flames — partly due to a new flammable wood preservative that had been recently used in the house. Today, the lot remains vacant, though it's still owned by the Gibbs.

Highgate, a North London home in Stanhope Gardens, is among the most memorable sites connected to Pink Floyd, one of the most influential bands of all time. Syd Barret, Roger Waters, and Nick Mason lodged here in the '60s, just at the time when their legendary psychedelic sound was developed in these rooms. For decades, the building was owned by Mike Leonard, a college tutor of the band members and the lighting expert responsible for parts of their shows, who preserved the house in its original condition. Leonard quickly became friends with the band, and unlike other house owners, he didn't interfere with their practice sessions. As Mark Blake, author of Pigs Might Fly: The Inside Story of Pink Floyd, said for the Daily Mail:

"It gave somewhere for them to live and somewhere to rehearse with a sympathetic landlord who did not mind about them making a noise. This is where Pink Floyd started to come together."

After Leonard's death in 2012, the three-storey house went up for auction. At the time, it was still full of memorabilia connected to the band's past, such as a rare Binson Echorec 2 echo unit that was used by Barrett and Gilmour to build up the characteristic Pink Floyd sound. There were also many old instruments such as a huge homemade xylophone, bongo drums, and tambourines lying all around the place. The house even included a workshop for Leonard, where the complex "lysergenic" lighting system featured in a Tomorrow's World BBC broadcast from the house in 1968 was designed. In an interview connected to the auction, Mason added that the bonnet of his old Aston Martin is probably still buried underground somewhere in the garden. 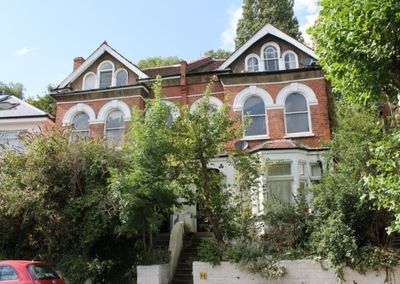 However, the result of the auction didn't please the followers of the band, who hoped to turn the house into a museum. A Singaporean developer bought the building, admitting to not being a big fan of the band. The buyer paid £1.2 million and remarked that she had a friend who was a devoted Pink Floyd fan and might be happy to take some of the memorabilia, plus she might "put some of the stuff on eBay."

Young Bruce Springsteen used to live in a small cottage in Long Branch, New Jersey, in 1974 and 1975. The house is just 828 square feet and includes two bedrooms, a bathroom, a living room, and a kitchen, front porch, patio, and small yard. The building is situated just one block from the beach, making it an ideal place for young artists. However, a seaside location has its negatives as well. Several years ago, the neighbourhood was hit by Hurricane Sandy, which badly damaged many properties. Luckily, Springsteen's former home survived the storm quite well. 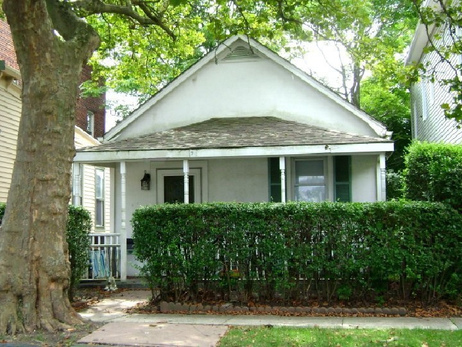 During the time Springsteen spent here, he wrote such hits as "Born to Run," "Thunder Road," and "Backstreets." And as his neighbours recall, the 25-year-old musician was already a local celebrity at the time. In the Wings for Wheels: The Making of Born to Run documentary, Springsteen talks about coming up with the "Born to Run" song title while sitting on the edge of his bed in the house.

In 2009, the building was bought by three fans of the star, who decided to save it from developers' plans to demolish the place and paid $280,000 USD. However, in February 2013, the last resident and co-owner of the house was getting married and listed the home for sale for $349,000 USD. The owners also vowed not to sell the cottage to anyone who intended to tear it down and said they were looking for a new caretaker of the music history site. Ever since, there has been no news about the house.

No list of famous music history houses would be complete without the iconic mansion of the king of rock n' roll in Memphis. Elvis bought Graceland in 1957 for $102,000, as it became apparent that his former place at Audubon Drive couldn't provide sufficient privacy and security for the rising star. The house was the last home that Elvis had in Memphis and also the place where he tragically died, exactly twenty years after the initial purchase.

Nowadays, Graceland is one of Memphis's top attractions, with tens of thousands of tourists who come in every year to get a taste of the home's unique atmosphere and learn more about the life of the legendary performer. Admission to the mansion varies according to the type of tour visitors decide to take, ranging from $33 to $70 USD for adults. 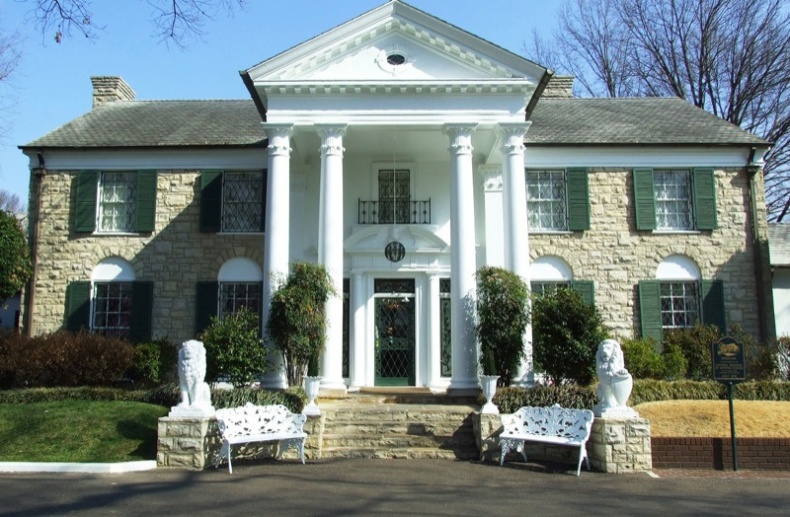 Tourists have access to all parts of the mansion, which was preserved in nearly original condition. Visitors can roam the living room, kitchen, TV room, poolroom, and many more areas, including the famous Jungle Room, which features an indoor waterfall and was also used as a recording studio for the final two albums that Elvis released (From Elvis Presley Boulevard, Memphis, Tennessee and Moody Blue). The tour of the house also includes an original business office, a trophy building, and the racquetball building that houses a collection of Elvis' awards and honours. Graceland tours usually end in the Meditation Garden, where Elvis, his parents, and his grandmother are buried. 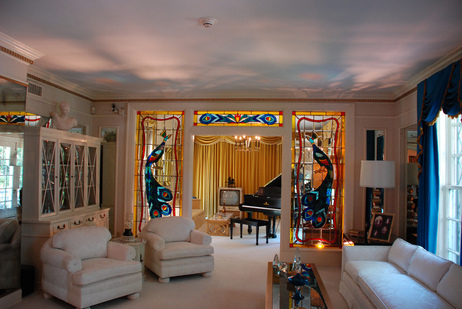 There are different opinions about the house itself, with a huge amount of people finding it terribly tacky and tasteless — some even go as far as claiming that the mansion's interior is simply a wealthy version of "white trash" aesthetics, mainly due to the extensive use of such features as royal red fur and leopard skins. On the contrary, others point out that the décor of the place reflects the star's distinctive personal style that emanated glory and the distinctive 1970s fashion that later became Elvis' trademark.

Fun fact: This summer, the press speculated that Kanye West wanted to buy Graceland (worth approximately $91 million CAN) for him and his girlfriend, Kim Kardashian.