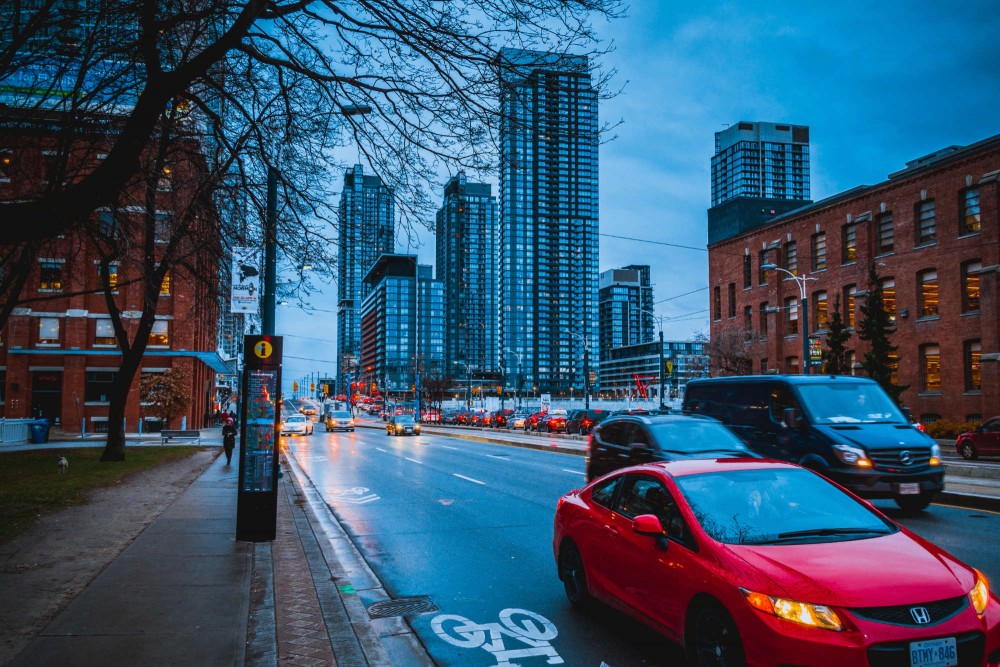 Maintaining a healthy work-life balance is one of the great struggles of modern times. Trying to dedicate time to family, friends and sanity while being a productive worker has never been easy, but it grows more difficult every year. In a region like the GTA, where the average commute is 65.5 minutes, it’s no wonder that more people are increasingly looking at working from home as a viable alternative. Jen Palacios, Sales Representative at the Julie Kinnear Team says she's noticed the same trend:

I have heard more and more people say ‘I work from home once a week now,’ or ‘two days a week I’m allowed to work from home.’ I think part of that is, especially if their commute is longer, they are doing more of a work-from-home scenario.

It’s a little bit more maintenance free than living and working from a house, where it’s easy to get distracted. There are often fewer things to fix or do in a condo so you could be more focused. There’s less lures of procrastination.

Avoiding procrastination is one of the greatest challenges for people who choose to work from home, but the rewards are often worth it. Jen likes the flexible hours. She enjoys spending time with her dogs and being able to take them for a walk whenever she wants. But she points out that it’s important to stay focused on work.

I think you have to be disciplined. I get up and because I have to walk my dogs I have to get dressed, but I know some people who work from home and stay in their pyjamas all day. I think you have to have a regimen that almost feels like going to the office. Being at your desk at a certain time as if you’re going to an office but you’re not, so that you’re more disciplined.

People Are Looking for Condos with Office Spaces

Jen herself has worked from home for nearly 20 years, and more and more people are joining her every year. According to the most recent Statistics Canada report released in 2010, more than 1.7 million paid employees worked from home in 2008 at least once a week. A majority of millennials say they would prefer to work from home and more companies are jumping on board in an effort to attract young employees and save money. 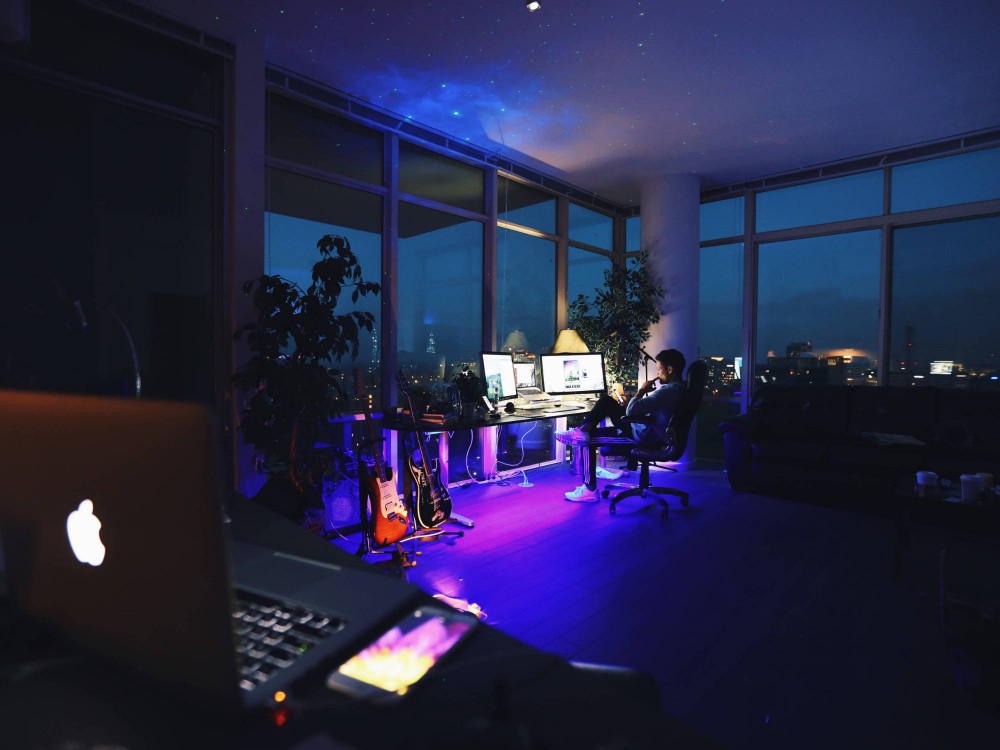 As a sales representative, Jen helps buyers find the homes best suited to their lives. She says she has really noticed an uptick in people looking specifically for home office space, but she points out that could be because working from home is easier now too. Gone are the days of large desktop computers that took up space in the gloomy, poorly lit corners of homes. People are content to just open their laptop at their kitchen table.

There are a lot of things to consider when buying a home, but if you plan on working from your kitchen table or couch you might have some different priorities.

Walkability is often important to people who work from home. Whether you’re just escaping your apartment for a while or heading to a local coffee shop for a meeting, what neighbourhood your hang your hat in might be more important for you than for the folks who prefer to drive everywhere.

I often recommend the St. Lawrence Market area because the walkability is amazing there, and you’re still downtown, you’re still close to transit. I would say Liberty Village is good for the younger crowd. There’s a lot of amenities there now. 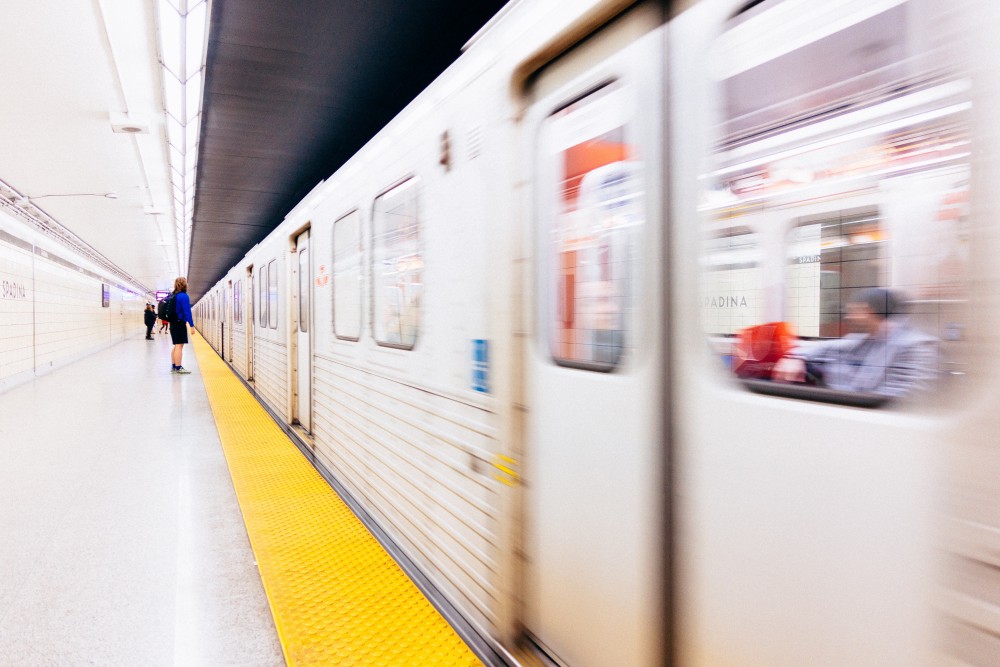 Jen says there are pockets all over the city that are great for telecommuters. If you prefer an uptown vibe, Martin and Davisville might be a good choice, but if you think you’d like to live somewhere with a little more going on you should look downtown. What’s important is understanding what you want.

Pay attention to the noise level too. Jen says most condos in Toronto are built to a certain standard as being soundproof, so hopefully you won’t be bothered by noisy neighbours. But there are other problems that can arise.

I sold a condo to a writer, and she found that her condo was a bit too loud for her to really concentrate on her writing because she could hear the street and she was very sensitive to noise. So I think you should pay more attention to the outside street sounds than those from between the walls.

This Downtown neighbourhood, formerly an industrial area, bounded by Yonge, Front and Parliament Streets and the Canadian National railway embankment, is one of the oldest neighbourhoods in Toronto. It got its name thanks to the famous St. Lawrence Market, which is the the neighbourhood's landmark. 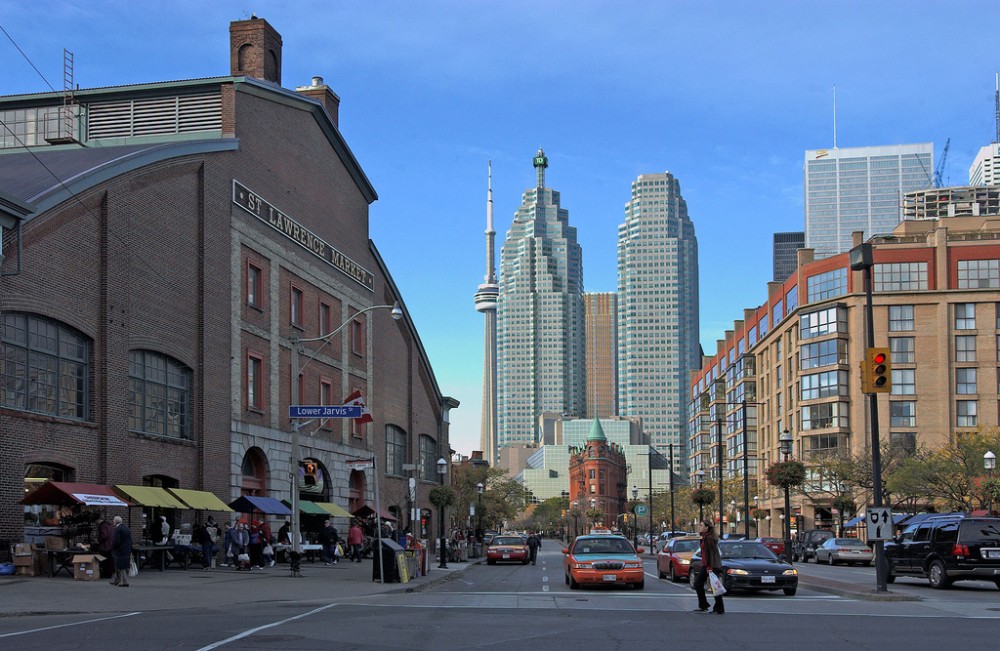 Toronto: Front Street by The City of Toronto

The neighbourhood is almost as old as Toronto itself. The georgeous Georgian style brick buildings on Front Street date to this period. In the 1970, Mayor David Crombie decided to turn the area, which was an industrial wasteland, into a residential neighbourhoood. More than 3,500 residential units were built. 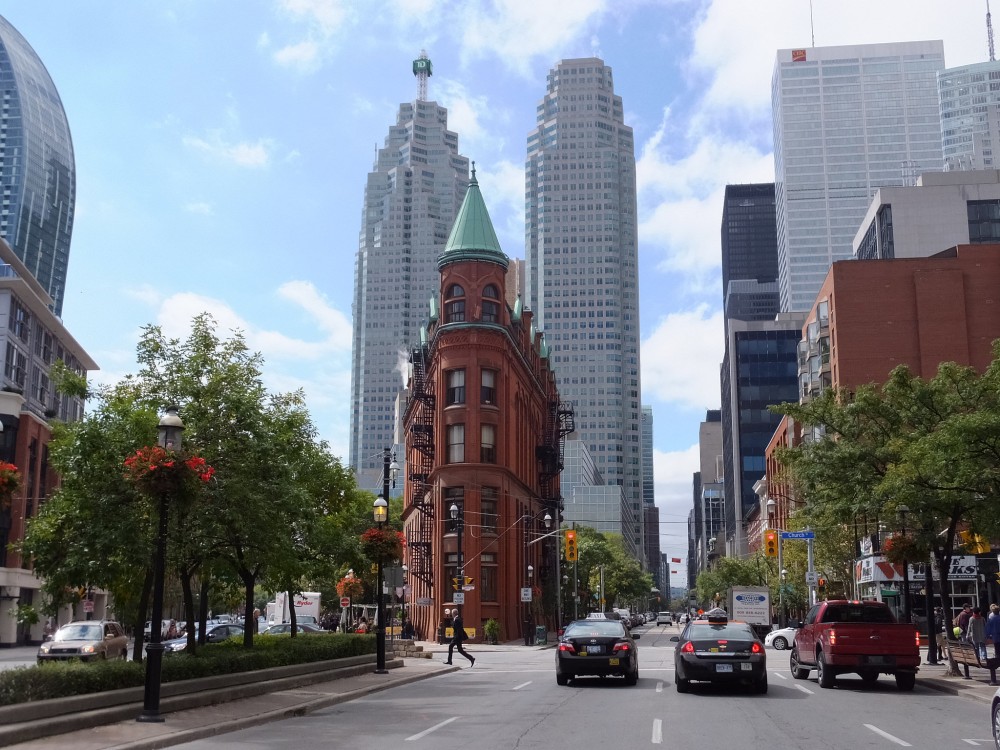 From the Flatiron building on Front and Wellington St., first of its type in North America, to the St. Lawrence Hall, Victorian red-brick exteriors to modern high-rise condos and commercial buildings, St. Lawrence Market, The L-Tower, Olde Yorke Place, St. Lawrence Market neighbourhood is the home to some of the most interesting architecture in Toronto. Its close distance to shopping, St. Lawrence Market, fine dining, theatres and lots of old warehouse buildings turned into amazing lofts, make it the perfect choice for someone looking to live in the busy downtown, but without all the noise. 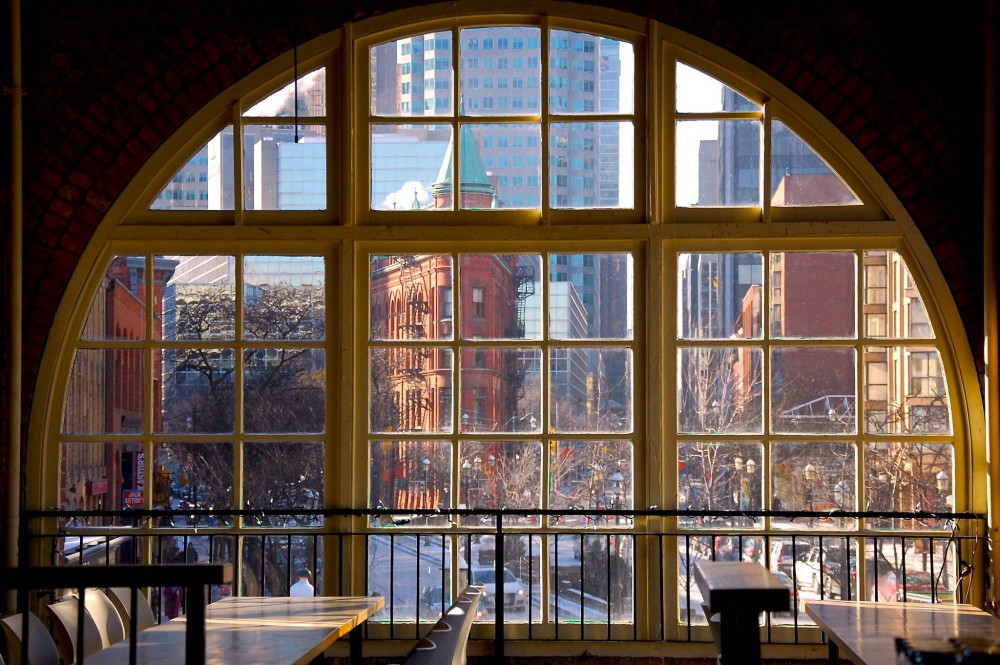 Liberty Village, bordered to the north by King St West, to the west by Dufferin St and to the south by the Gardiner Expressway and to the east by Strachan Avenue, is a 43-acre master-planned community. It combines residential, commercial and retail buildings. The neighbourhoods attracts young professionals in media, high-tech and design businesses who live and work in the urban core. 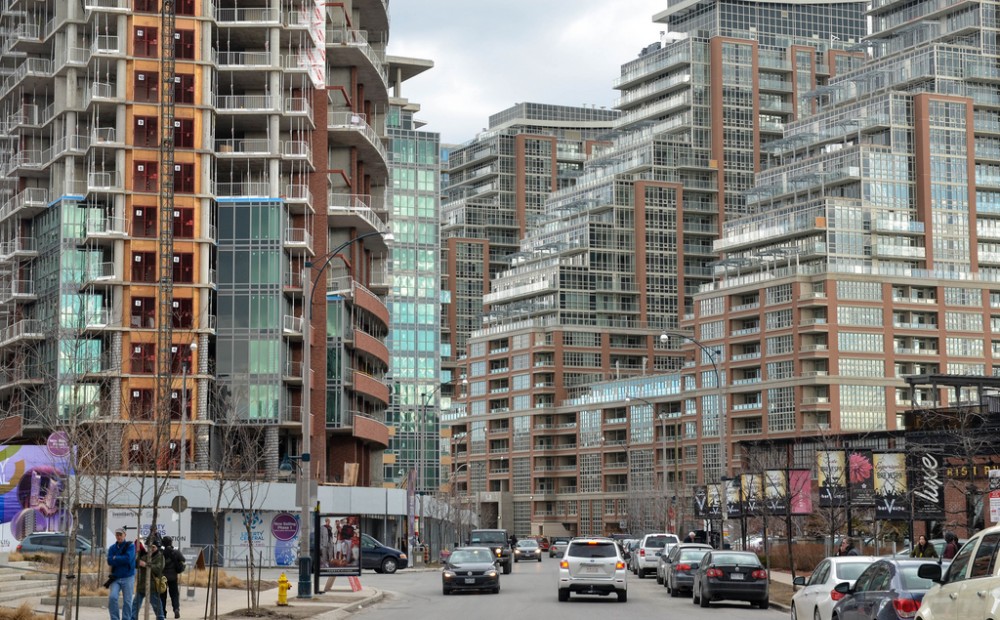 The neighbourhood was "created" just over a decade ago and it was mostly focused on young singles, design firms, loft living and people seeking vibrant nightlife. The red brick Victorian industrial architecture dominates the neighbouhood which gives it an urban vibe. Liberty Village was formerly an industrial area, and many of its old factories were turned into lofts, some have become restaurants, furniture stores, galleries. It’s popular among local artists as a great neighbourhood for live/work spaces. 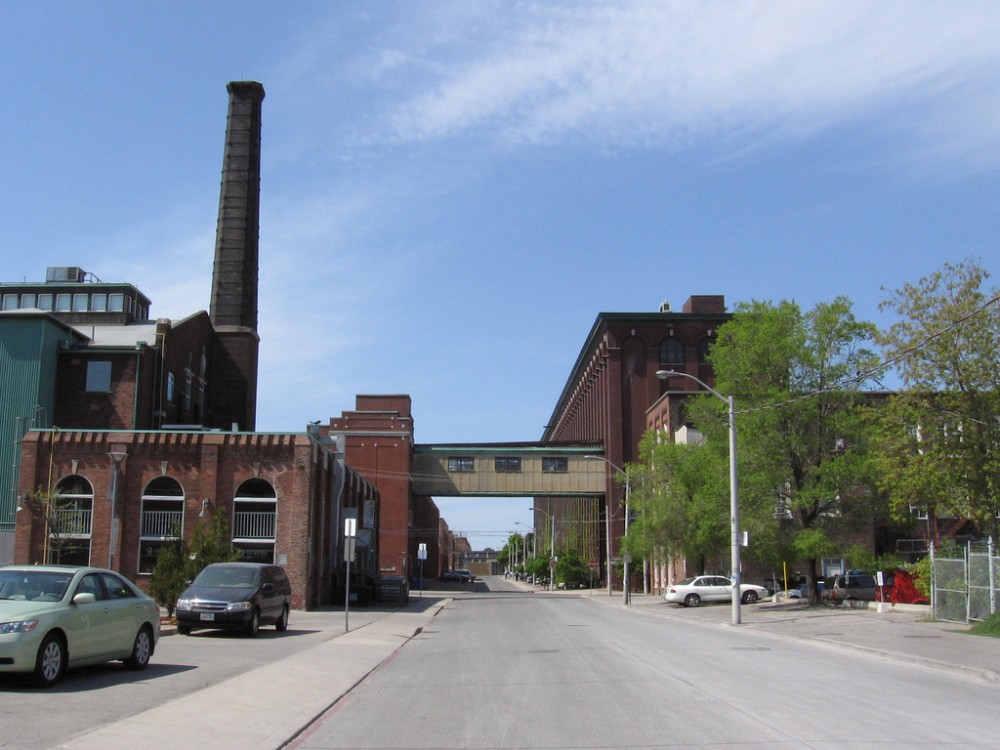 This is a trendy neighbourhood, popular among the young people, under 35 and it is very pet-friendly. It’s a great choice for those looking for a condo living, young professionals, couples, singles and students. It is one of the favourite neighbourhoods for first-time condo buyers, because it is reasonably priced and it is a mix of condo developments and town homes, and it is also very close to amenities, downtown, and great nightlife.

One of Toronto's favourite condo neighbourhoods, Davisville, has always been popular with singles, young couples and young families, thanks to its central location, excellent recreational facilities great shopping districts and active nightlife. 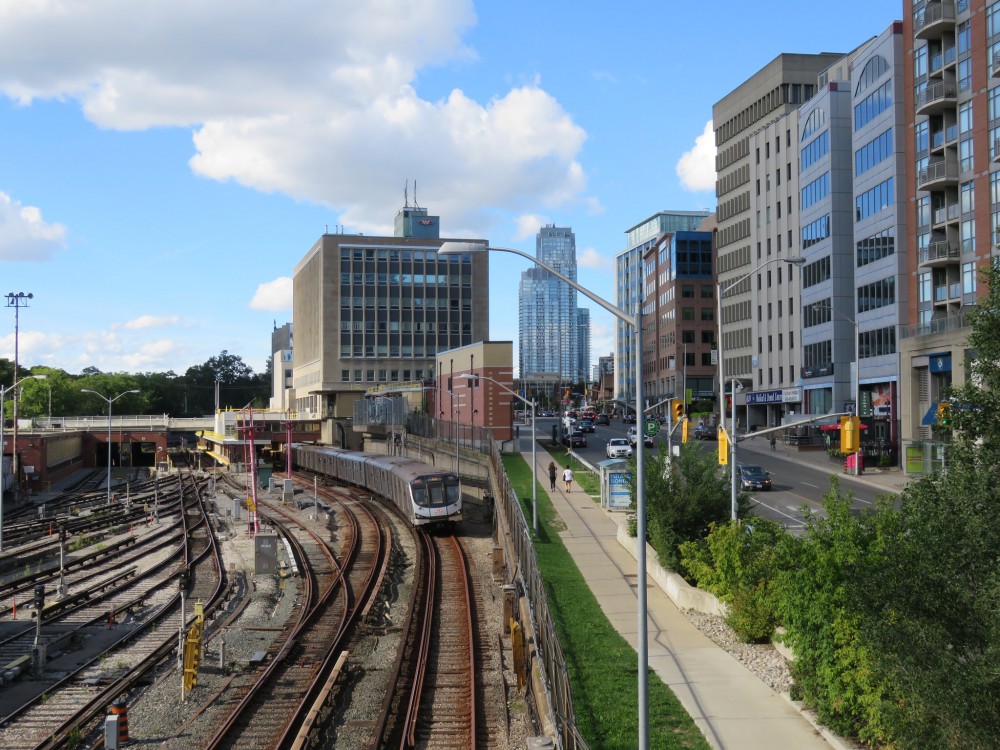 Looking north to Davisville Station and yards by Sean_Marshall

The majority of the houses in the area were built in the 1920s and 1930s. If you go west of Mt. Pleasant Road, you’ll find mostly large, two and three storey English Cottage and Edwardian style homes. East of Mt. Pleasant Road are houses made up mostly of smaller, detached and semi-detached homes and bungalows. Condo developments are located mostly on Merton and Balliol Street, and along Eglinton Avenue. Toronto Life called it "a midtown address without the Summerhill prices". 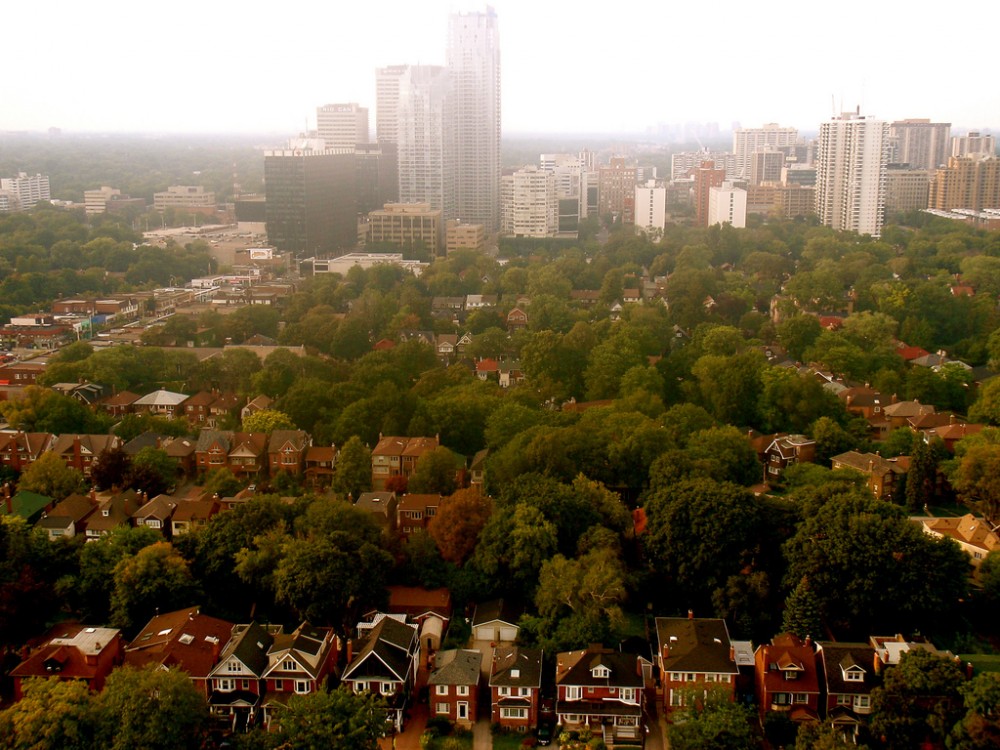 Looking northwards from Davisville to Yonge/Eglinton by Athena Kay

Davisville’s main shopping strip, Mount Pleasant lives up to its name, it's very pleasant. With its charming boutiques, indie cafes, independent bookstores and antique stores, it’s a great place for anyone who likes to spend their time wandering and exploring the city on foot. 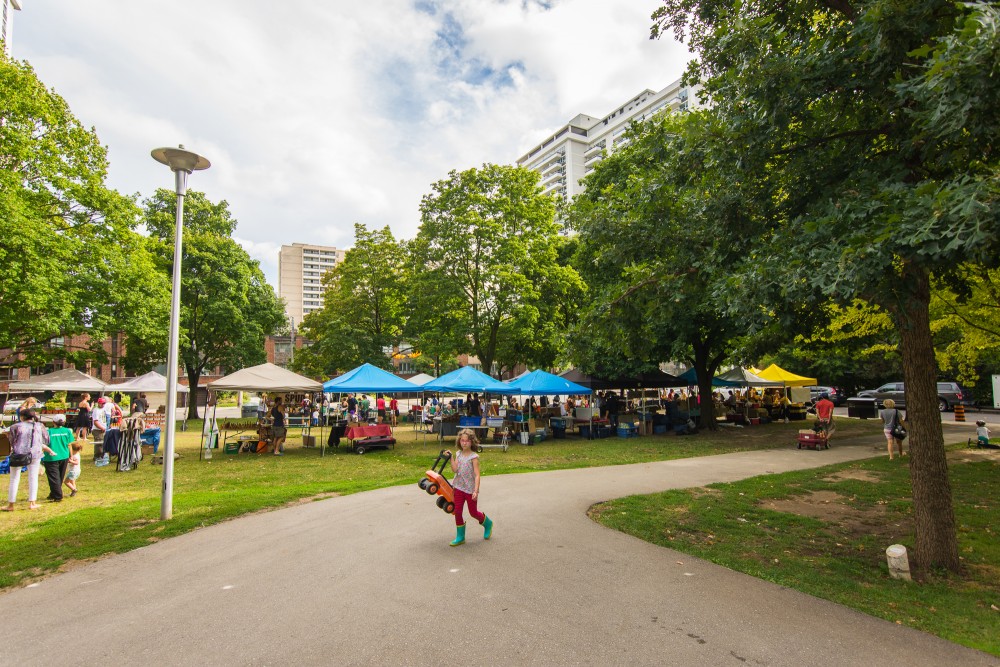 There’s a great variety of condo buildings in the area, all sizes and styles. It is a perfect choice if you’re looking for a relatively quiet area in Toronto with easy access to services.

Toronto’s real estate market remains red hot. People want to live there but finding available housing at affordable prices is difficult. Cutting down on commuting costs, time spent travelling to and from the offices, and buying lunches might be one way to cut down on costs. So maybe it’s no wonder more people are deciding to work from home.

If you're thinking about buying a condo in Toronto, please contact us at and let us help you find your dream place!