Whether you are decorating Christmas tree, baking cookies or wrapping the presents, there is a big chance that there's going to be one of the holiday movies playing on TV. These movies found a way to our hearts and even though we have seen them a thousand times, we can never get enough of them!

The JKT just loves this wonderful time of the year, when we can really slow down and enjoy our time watching movies with friends and family. So here are some of our favourite holiday movies! 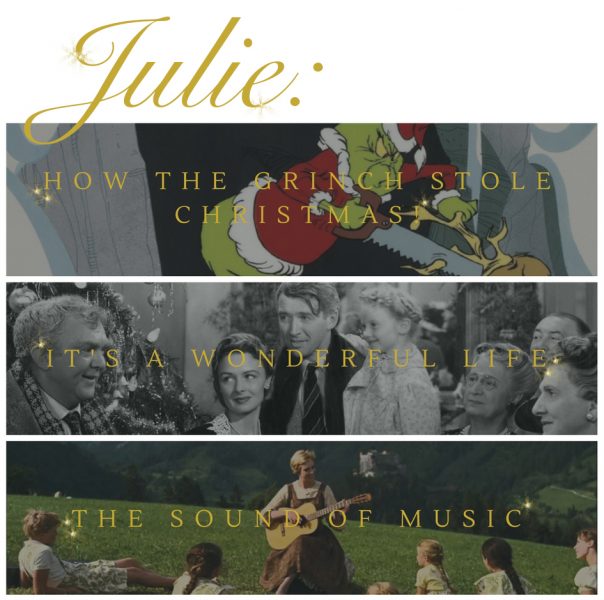 Julie's favourite Christmas movie is an all time classic How the Grinch Stole Christmas. This cartoon created by Dr. Seuss and animated by Chuck Jones cost around $300,000 to make, which was 10 times the price of the average animation at the time! And if you remember Grinch as a wacky green character, he wasn't always supposed to be that way - Dr. Seuss wanted Grinch to stay black-and-white but Jones fought back, stating that colour will be better for the TV. And we think that he was right! This year you can see an even newer version of this Holiday classic in animated version with Benedict Cumberbatch as The Grinch!

Speaking about black-and-white, It's a Wonderful Life is another classic on Julie's list. With a slightly dark plot about suicidal thoughts, this movie produced and directed by Frank Capra shows us why it is worth living, especially around this time of a year. You can see screening of this wonderful movie at A Classic Film Series Presentation throughout the whole December.

The third movie which Julie won't miss these holidays is a story about big family with even bigger dreams The Sound of Music. Starring two Toronto born actors Christopher Plummer and Heather Menzies, this musical was produced and directed by Robert Wise. There is also a theatre version of this movie, which was played at the Princess of Wales Theatre from 2008 to 2010 - this made it the Toronto's longest running revival ever. 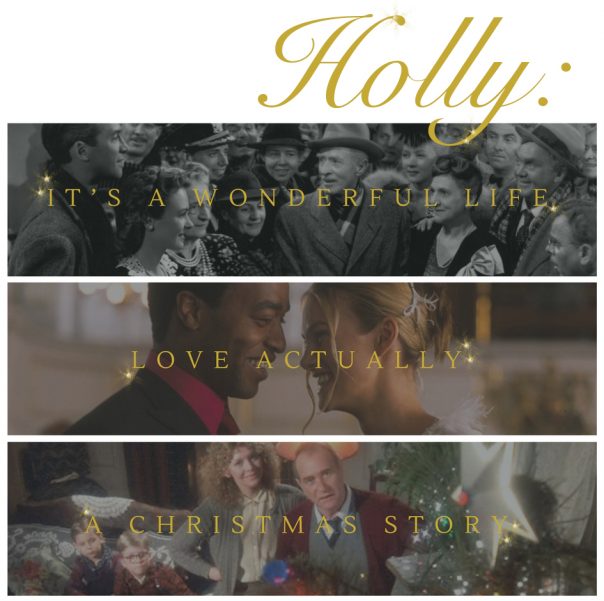 Love Actually is the first film on Holly's holiday movie list. This romantic comedy shows us different aspects of love through ten separate stories involving a wide variety of individuals. And if you love the iconic dancing scene, bear in mind that it took a lot of effort to make - Hugh Grant was actually grumpy about it, wanting his character to remain stately. But in reality we think that this has made him so charming. The lesson is - don't be afraid to dance these holidays, even if you are the prime minister.

We can find many more iconic scenes in another Holly's favourite movie - A Christmas Story with nine-year-old Ralphie wanting red air rifle so bad. This Christmas must-see was shot in Toronto, home city of its director Bob Clark. You can see the Chop Suey Palace on Toronto’s Gerrard Street East in the lost-turkey dinner scene and one of Toronto’s trademark red trolleys in the exterior shot. And filming the movie in Canada with its snow and subzero temperatures almost made Flick get his tongue stuck to a flagpole for real! Find those Toronto easter eggs for yourself at Hot Docs Cinema's screening on December 16. 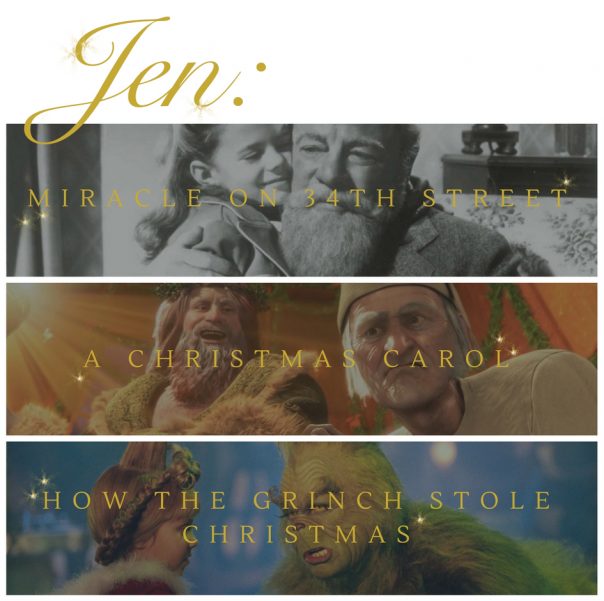 Jen brings another classic to the table with Miracle on 34th Street. Did you know that this movie was originally marked as just a love story, even with a premiere in the summer? But since it is about Santa Claus, it quickly became a Christmas ultimate movie pick - and phew, thank you Santa for that!

While we are being thankful, we can emphasize that by mentioning another Jen's favourite holiday movie - A Christmas Carol. This version, a 2009's Disney, is 3D computer animated, which enabled its lead actor Jim Carrey to portray a multitude of roles, from young Scrooge to three ghosts. We can say that this is the most famous Christmas story and since it was written by Charles Dickens in 1843, it got more than 150 versions. YouTuber Heath Waterman has celebrated this story by putting together more than 400 scenes into a single, coherent narrative - watch it here.

Another modern spin on a classic tale is How the Grinch Stole Christmas. When everyone else in the Whoville hates Grinch, it takes eyes of the six-year-old Cindy to find beauty in this fury creature. Grinch in this movie version is also portrayed by Jim Carrey, Ontario born and raised actor and comedian. He often reminisces about his home town saying "If my career in showbusiness hadn't panned out I would probably be working today in Hamilton, Ontario at the Dofasco steel mill. That's where the great jobs were." 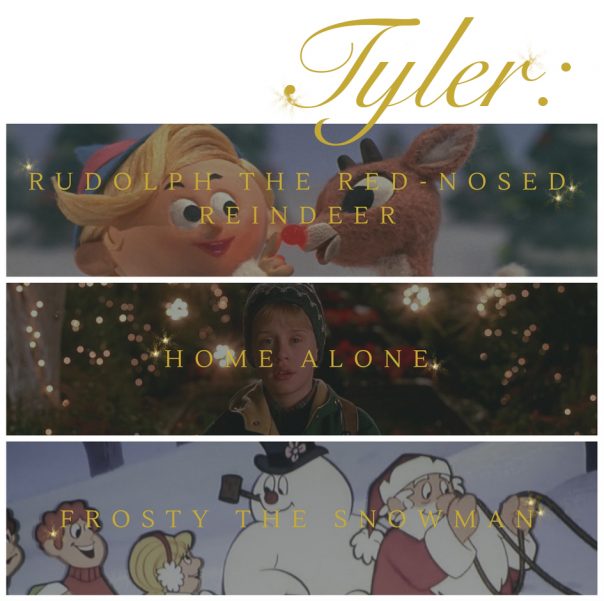 The nose of Rudolph the Red-Nosed Reindeer is shining bright on Tyler's list. A bittersweet story about accepting Rudolph despite his difference is teaching us lessons to this day.

Leaving someone behind is a plot of Tyler's next favourite Christmas movie as well, which is Home Alone, starring Macaulay Culkin and Toronto actress Catherine O'Hara. After Kevin's family left for vacation in Paris, he came face to face with the local pair of burglars. Scenes full of mischief are iconic, but the Wet Bandits might not have been leading the operation by themselves - there are some fan theories that Kevin's uncle or even his own father was behind all of this!

Let's not forget the Frosty the Snowman, who also has a special place on this list, for Christmas truly is a time made for movies about magical hats, escaped rabbits and live snowmen. 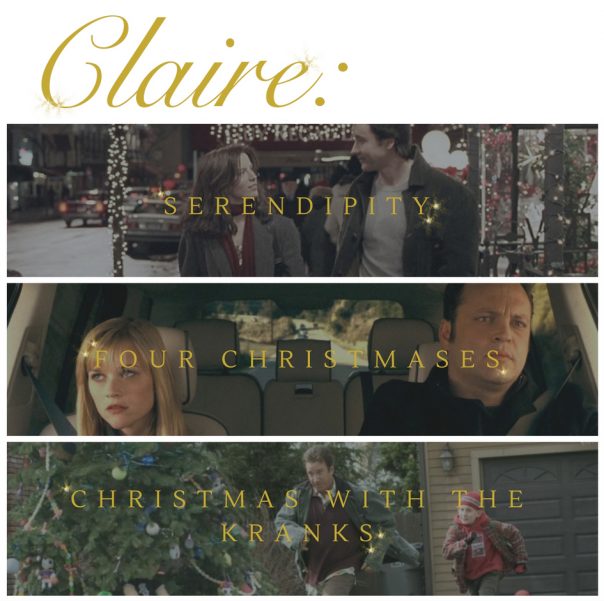 Serendipity is a word meaning "pleasant surprise", but it surely isn't a surprise that this title got a place on Claire's list! Starring John Cusack and Kate Beckinsale, some parts of this romantic movie filled with fate were shot in Toronto. Although it was mostly made in Showline studios' soundstage, you can still see the Markham Street and Fairmont Royal York hotel.

If you come from a divorced family or you have siblings with out-of-control kids for the holidays, you just have to love Claire's next tip - Four Christmases. This romantic comedy shows us the struggle of dysfunctional families and importance of talking to each other. You can read a lot of articles about lead actors Vince Vaughn and Reese Witherspoon not getting along while shooting, but the truth is only their height was the problem! With her being 5’2″ and him being 6’5″, Reese kept yelling "Tim-berrrrr" at Vince on many occasions. Talking about out-of-control kids!

Wrapping up our holiday movie tips is the movie Christmas with the Kranks. Choosing ten-day Caribbean cruise over Christmas in empty home might not always be the best idea and the Kranks learned their lesson. Starring in this crazy comedy is Dan Aykroyd, who is a proud Canadian - he has a star on Canada's Walk of Fame and he was even born on Canada Day!