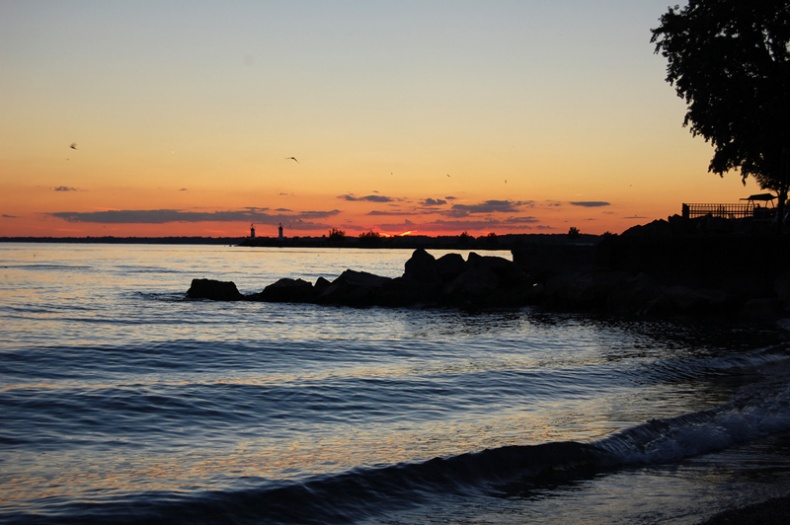 Point Pelee National Park can be found in southern Ontario at the tip of Point Pelee, a long peninsula jutting abruptly into Lake Erie. One of Canada's smallest yet excitingly unusual national parks impresses with 20 square kilometres of marshes, savanna grasslands, wild beachfront, and Carolinian forest, which looks almost like a jungle at some places. Such complexity of landscape supports plentiful wildlife species, which were the first attraction of the peninsula for early visitors coming here in a search of game. The national park was established in 1918 as a response to requests by birders and hunters. Nowadays, this spectacular place attracts mainly day visitors and bird watchers, with summer being the most popular season.

The land base of Point Pelee, formed by sand and gravel with some topsoil supporting woodlands and grassland, is just about 1,000 years old. However, the land is still changing as a result of exposure to water and wind. During winters, the Canadian Carolinian Zone is much warmer compared to other inland zones of the same latitude. Local marshes are one of the largest remaining wetlands in southern Canada. Point Pelee has also 20 kilometres of beach framing the peninsula, showing the most significant change of all its habitats: the beaches may become steep and narrow following a storm and its strong waves. 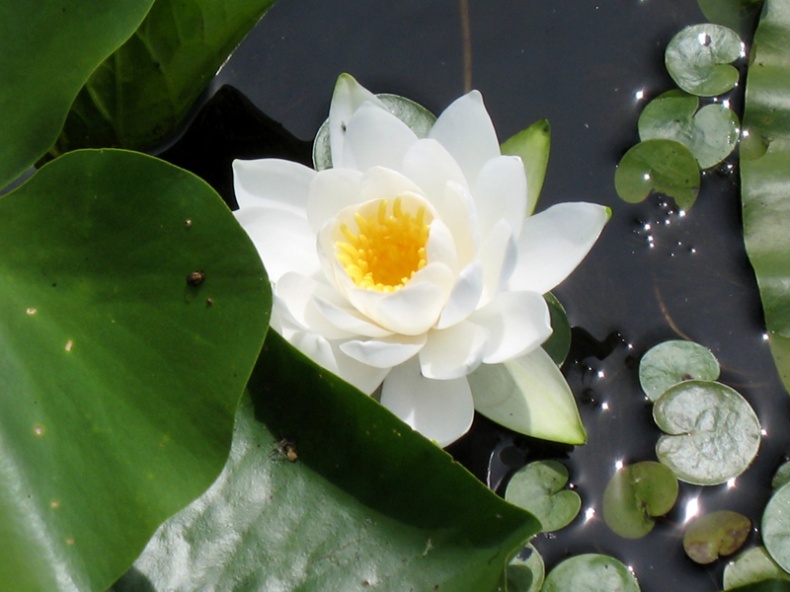 The park's diversity makes it a stunning place to visit. More than 700 species of both flowering and non-flowering plants can be found in the area, including some that can't be seen anywhere else in Canada. The characteristic poison ivy vines in local dry forest areas create an original jungle effect. The red cedar savannah is a habitat of many rare grasses and herbs such as wild potato vine and prickly pear cactus. The lower swampy area contains silver maple, willow, cottonwood, and dogwood. Across the marshland, the stunning beauty of water lilies floating on open water and hop trees find their northernmost setting.

Grey squirrels can be spotted everywhere in the park, but many other animals are present too. Almost two decades ago, conservationists released 99 southern flying squirrels to reintroduce these tiny creatures to the area. The squirrels, whose weight is just up to 75 grams, already fall prey to the common house cat, so their population is still carefully monitored. You can spot them near woodpecker's holes in dead trees where they build their nests. In the wetlands, a wide range of insects thrives, providing a food resource for several species of bat, frog, turtle, and non-poisonous snakes. Point Pelee National Park is sometimes also called "the park the birds built" due to the wide variety of bird species. Out of the 347 bird species recorded during the last century, almost 100 of them nest there. 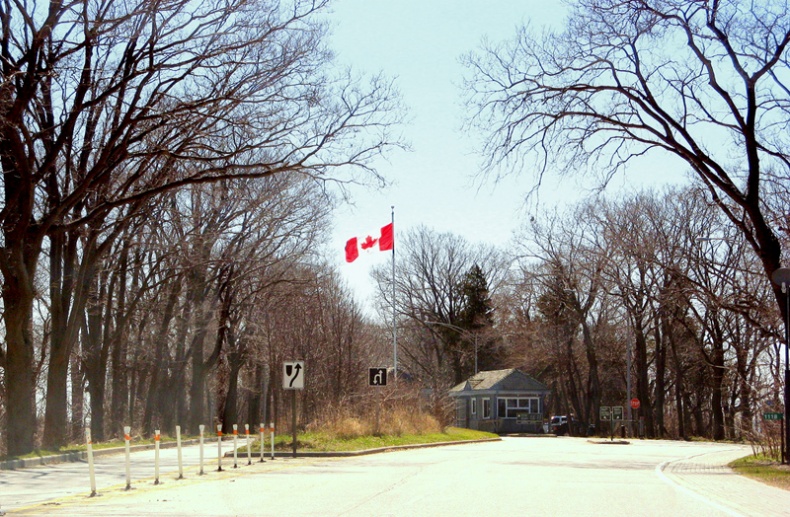 Point Pelee National Park operates all year long. However, certain areas may be sometimes prohibited for all visitors because of wildlife protection. It's located on the north-west coast of Lake Erie and can be reached by car or motorcycle. It's about 50 kilometres from Windsor and approximately 10 kilometres from Leamington. Taking Highway 401, head south on Highway 77. Once you're inside, there are bicycle paths as well.

Point Pelee offers diverse conditions in more than 12 kilometres of its trails for both hiking and biking. At the Visitor Centre, you can get some interpretative trail booklets. Staying on designated trails to avoid poison ivy and ticks is highly recommended. 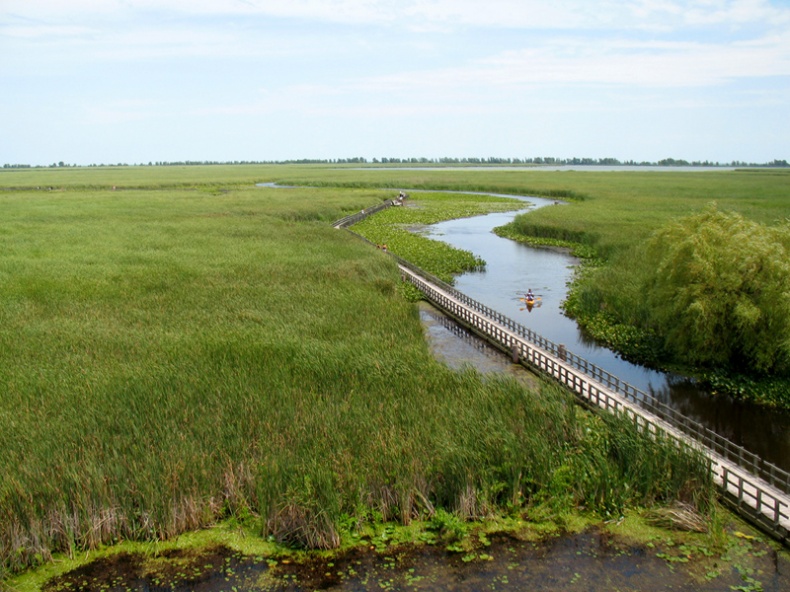 Marsh Boardwalk is a relatively short loop near open ponds and a cattail marsh that includes two observation sites with telescopes to keep visitors' eyes open for turtles, frogs, muskrats, or birds.

Centennial Hike and Bike Trail, a four-kilometre trail running parallel to the road between Marsh Boardwalk and the Visitor Centre, provides gentle hiking through hackberry dry forest and beach.

Delaurier Trail denotes a loop of 1.2 kilometres featuring the park's cultural heritage. A historic house and a barn with exhibits, a swamp forest, a marsh, and old canals can be seen there.

Tilden Woods Trail begins at the northeast corner of the parking lot at the Visitor Centre and features horsetails, swamp forest, and cedar savanna.

Woodland Nature Trail is almost three kilometres long and begins behind the Visitor Centre. Habitats on this trail include swamp, dry Carolinian forest, and cedar savanna.

The Tip Trail consists of a one-kilometre long loop around the tip of the park. Along the trail, you can found out more about the tip itself from informative exhibits. Make sure to check out the southernmost point of mainland Canada! 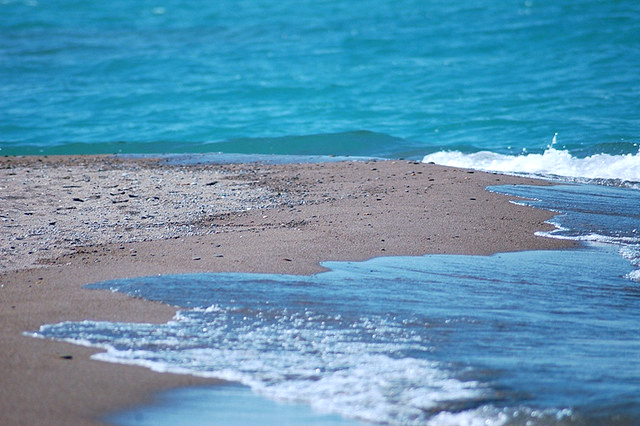 Lake Erie looks from here like an ocean due to a long stretch of picturesque beach. Swimming is allowed; however, the area may be very dangerous because of undercurrents. Lifeguard duties are not held. Early June may be too early for swimming, but visitors can still enjoy the sandy beach with its dunes in one part. For the results of beach water quality monitoring, check the Park Entrance Kiosk.

North West Beach is the largest beach often proclaimed to be the most beautiful at the park with picnic benches and charcoal grills for picnics on the beach. 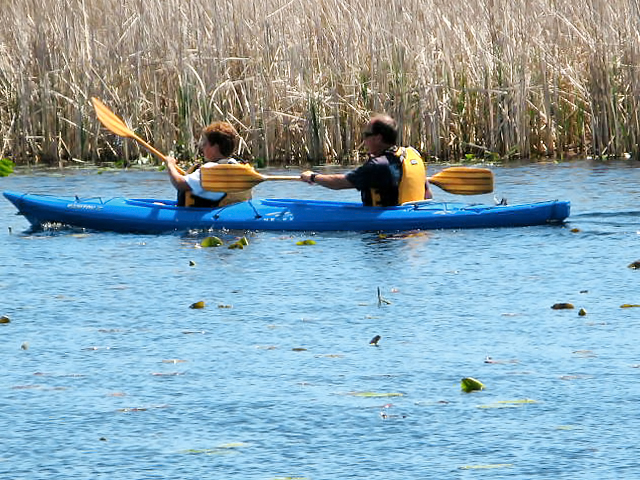 Since two thirds of the park consists of marshes, exploring the peaceful mysteries of the park by canoe, kayak, or by joining up on the Freighter Canoe Tour is a great idea. Canoes can be rented at the Cattail CafÃ© which is run by Friends of Point Pelee and located at the Marsh Boardwalk. Rentals start at $12.00 per hour. Don't forget the marsh is about 800 times bigger than a football field and follow safety guidelines to enjoy your paddle in this internationally recognized wetland.

Point Pelee National Park and its surrounding area provides visitors with a myriad of opportunities. Make sure to contact the establishments if you're planning to go outside the season, as some of them may be closed.

At Leamington Marina, you can enjoy a nice picnic lunch with the waterfront and its many activities. The completely reconstructed facility overlooking Lake Erie offers accommodation too.

Located in the Marsh Boardwalk area, the deck has three levels providing splendid view of the marshes. It's also an ideal place from which to observe birds and enjoy a bird's eye view of the marsh. 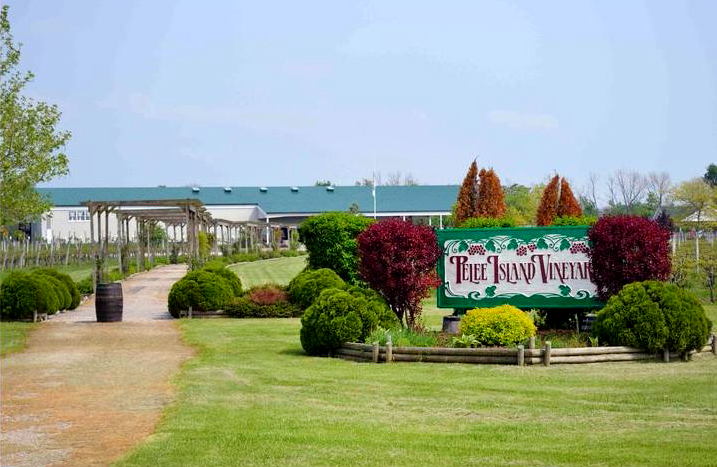 Here, you can enjoy tasting the production from grapes grown on Pelee Island, an island in the western half of Lake Erie connected with the mainland by ferry, and test quality of award-winning wines on your own. Interactive winery tours are offered. Pelee Island Winery also features the Ale, Wine and Spirits Trail that showcases area breweries and the Canadian Club Brand Heritage Tour.

As a rarity among Canadian National Parks, Point Pelee has no campgrounds within its boundaries due to the small size and wetlands that cover a substantial part of the park. It may be useful to look for some bed and breakfasts nearby in Leamington or other locations. A full list of the guest homes can be found here.