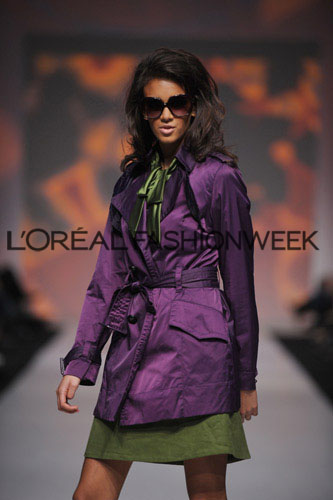 An invitation to the last day of L'Oreal fashion week, Friday the 24th of October 2008, came completely by surprise to me the previous evening. Hardly in the know of the fashion industry, I clearly did not know what to expect. This was my first attendance to an internationally acclaimed fashion show. As I wandered, or shall I say strut, towards the big white tent in the middle of Nathan Philips Square, scenes from 'The Devil Wears Prada' came to mind- I imagined gorgeous super models draped in yards of chiffon, carrying beautiful purses and wearing breathtaking heels, sauntering around to the soundtrack of U2's 'The City of Blinding Lights'.

However, I was met with average looking people, average looking clothes, a few feathers, dorky glasses, and men with makeup on, existing quite normally to ambient music. I was actually relieved to find fellow human beings instead of snobbery. I believe Canada is too kind a country to have highbrowed fashionistas strutting around a tent acting like they own it. In fact, it was a wonderful feeling to be around the same highly intellectual, refined crowd of Toronto that appreciates art and fashion and is not prejudiced about sharing it. 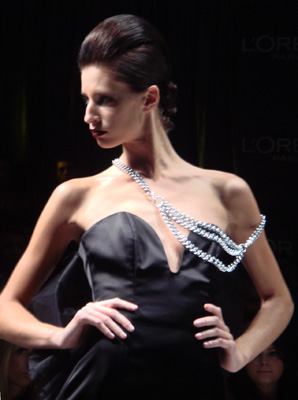 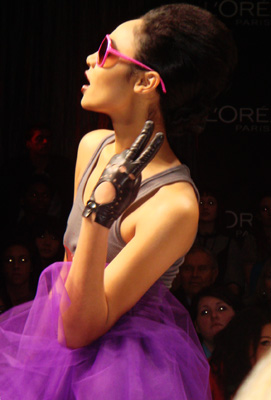 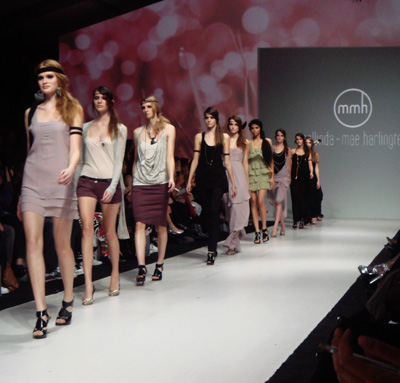 I held my breath as I walked in, humbled and feeling completely out of place, waiting to be discovered and thrown out by the bouncers for some fashion crime or another. Contrasting my television influenced imagination, the bouncers at the main entrance were actually very nice. The entrance flaunt a wall of television screens playing the ongoing fashion shows, next to it were a display of cell phones, and some makeup artists advertising L'Oreal products. The lounge area was basic; black and white with colored strobe lights that created the desired ambience. There was a set where FTV interviewed all the designers, an unpretentious little v.i.p area, and of course a centrally located bar especially designed to break the ice between the edgy fashion people, relax the nerves of fashion world first timers, and provide for the thirsty.

Inside this magic fashion tent I was immediately transported to a world where it was okay to openly stare at one another from top to bottom, and calculate the worth of an outfit. Of course, we did this with complete Canadian decency. I saw lots of familiar fashion faces, thanks to the knowledge that the show Canada's Next Top Model provided me. FTV's famous host, and judge on CNTM, Jeanne Becker was interviewing all the designers; contradicting popular opinion, there was nothing 'high-fashion' about her demeanor, but of course, when she spoke, one would realize that she in fact is high fashion. Another Top Model personality amongst us was the spunky diva Stacey Mckenzie, who is now a model/runway coach. In her prime she modeled for a star studded line of designers, and was best known for her expressions that translated well on film and spiced up the runway. Today, she wrapped her self in a white cape of high-fashion-car-cover sorts, and wore a red beret. She was definitely divaesque, and could make any piece of clothing look good. Other than the two people I recognized, I gathered that a lot of whose-who were in attendance based on the ensembles some people don, and the way they carried themselves with nonchalance. These fashion big guns appeared to have tagged along their upstart friends who seemed uneasy in their clearly borrowed clothes that they could not carry. They were obvious nonentity protégé fashionista slaves.

Now on to the shows: The lines I was to see were consecutively; Nada Yousif, Quagmire Golf, melinda-mae harlingten, and Lucian Matis. I was thrown out for the finale with afshin feiz because it was special invites only- that means no clueless first timers, savvy?

We had second row seats for: Nada Yousif, whose designs were mainly decadent dresses in bright colors for punk rock divas. Quagmire Golf, that had designs for the golfing sorts. And Lucian Matis whose work was absolutely stunning with luxurious cuts of flowing chiffon, elegant dresses and beautiful pearls that reminded me of cool crisp breezes in picturesque locations. Really, his clothes took me there! We lucked out and got front row seats for melinda-mae harlingten's collection, which was an array of the kind of clothes normal people, who don't have yachts to cruise in or Grammy's to attend, can wear. Models came out in cute shorts and inspiring twists to flapper dresses. Her show was encored by a half naked brawny man wearing an Indian chief's feather headdress and the kind of tight golden tights you see at the American Apparel store, and wonder who will buy (hint: him). He did some unspeakable things. Any how, to make it all better we landed a front-rowers goody bag, packed with tidbits from all the sponsors. Exciting. We got everything from razors to tea to whitening strips, to a high fashion safety pin with bells and buttons on it, to a divine environment friendly shopping bag from a vacuum cleaner company. It was the loveliest goody bag of treasured trash that I have ever received.

Overall, the atmosphere at Toronto's L'Oreal Fashion Week was fabulous, and the event was a great success. It undeniably bragged a luxurious lifestyle of aesthetically pleasing people and pretty things that one could easily get used to. I am very proud to live in this beautiful city that is now also on par with the fashion capitals of the world.