"You're nobody if you don't have a banana."

At least, that's what Richard Welsman — the Parks Department gardener at the Rosetta McClain Gardens — told me. Apparently, last year saw a fad for banana trees sprouting up among Toronto's fancier parks. As a result, a pair of these grand, exotic little trees now stand guard along the main path through his workplace. 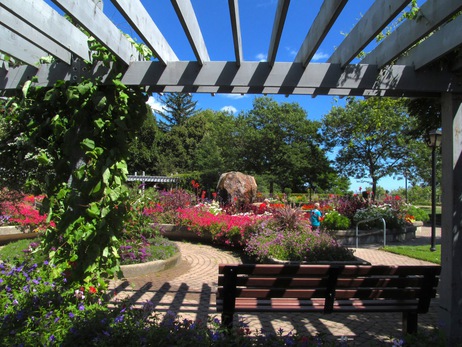 Placed precariously on the very edge of the Scarborough Bluffs, the Rosetta McClain garden is fairly small by Toronto garden park standards, with only 23 acres. Formerly the property of Rosetta and Robert McClain, the land was donated to the city by Robert after Rosetta's death in 1940. Although lacking the vastness and floral variety of such places as Edwards Gardens, Rosetta McClain compensates for its lack of bulk with a grand view of the lake and a surprising diversity of birds. Dedicated birdwatchers have apparently sighted nearly 200 species in the area. 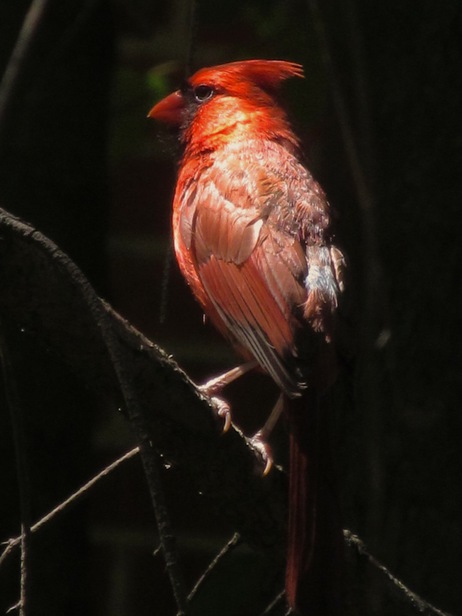 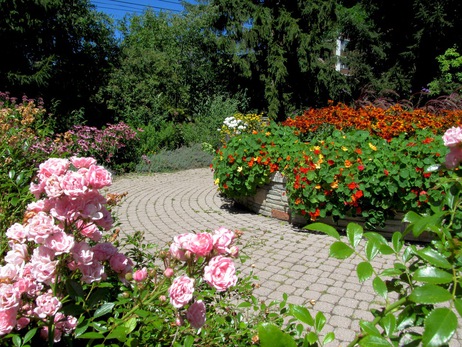 Entering the park through the main gate just off Glen Everest Road, you find yourself at the one end of a tree-lined avenue leading down to the central garden and the sheer cliff edge beyond it. To the right of this path is the parking lot, and the building that houses both the public washrooms and the caretaker's offices. To the left, more paved paths wind between towering trees and shaded flowerbeds towards the lake at the far end end of the park, or to the rose garden and gazebo up near the road.

This is, I have to stress, a garden park. There's no a swing set or soccer ball in sight. In fact, all ball-related activities (along with picnics, dogs, and bicycles) are forbidden here. They might damage the flowers. 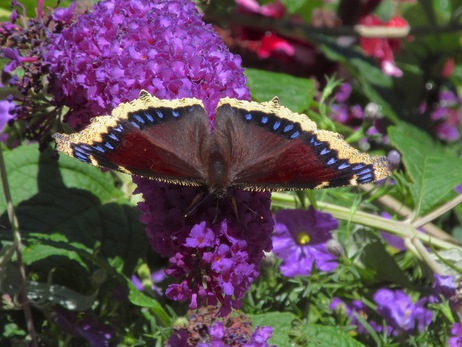 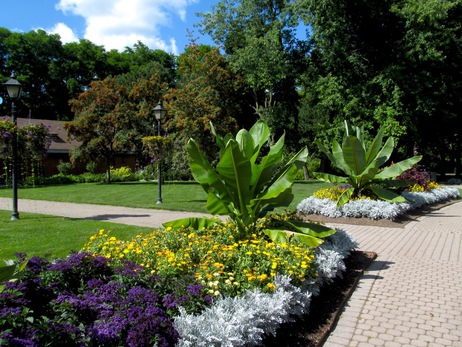 And what about the flowers? Mr. Welsman told me that — with the exception of the rose garden — most of the Rosetta McClain plants change every year, making each bed an annually creative endeavour. It's also a very labour-intensive activity. Mr. Welsman spoke of planting "several thousand" bulbs every October, and that's just the fun part. As with any garden, there are endless weeds and persistent pests. Four trees have fallen to the dreaded emerald ash borer in the last two years, while the little green and yellow bags hanging around the park are scent traps set up to catch the invasive Japanese beetles that are currently munching on the roses. 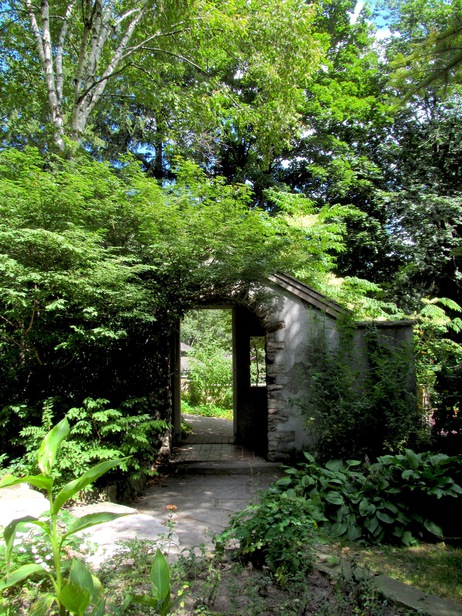 Mr. Welsman is one of five permanent parks department staff who work in the Rosetta McClain Gardens full-time (barring winter, when the park isn't maintained and can become dangerously icy near the lake). Along with planting, watering, and weeding, there's lawn care, litter picking (the place is noticeably pristine), and maintaining the public washrooms. I had the good fortune to spend an hour in the company of Charlene Bowman (she of the camera and the feather-decorated riding mower) — a parks worker responsible for maintenance tasks such as grass cutting. She showed me her pictures of various McClain relatives and explained that the few walls standing near the gazebo were from the home of Rosetta McClain's niece, Mary West. According to Ms. Bowman, Ms. West owned and lived on a small plot in this corner of the park even after the rest of the area opened to the public. After she moved away, there were thoughts of turning the house into some sort of café or snack bar, but there was enough local resistance to this idea that the building was instead reduced to the picturesque ruin that now stands between the main driveway and the rose garden. 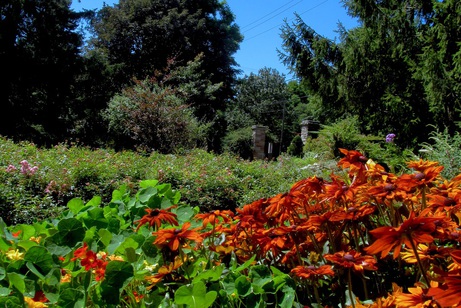 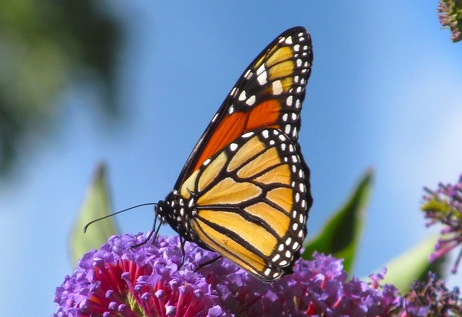 Usually, a garden calls to mind seeds, earth, and plants rooted in the ground. Given this, it's somewhat ironic that one of Rosetta McClain's great attractions actually soars through the sky. The park's position on the northern shore of Lake Ontario places it directly in the path of many migrating birds. It's especially good for observing birds of prey on their fall flight south around the lake. To track the numbers (and potentially the health) of each of the 15 raptor species who frequent this flyway, members of the Rosetta McClain Raptor Watch stand sentinel in the park between mid-August and November, counting and (if possible) identifying each taloned traveller that passes. 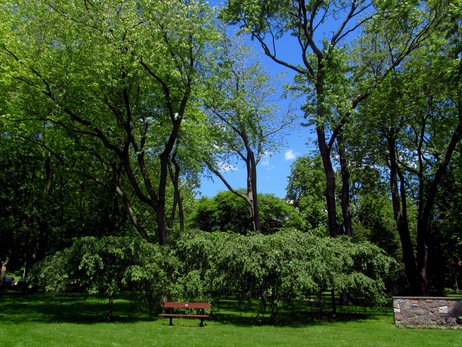 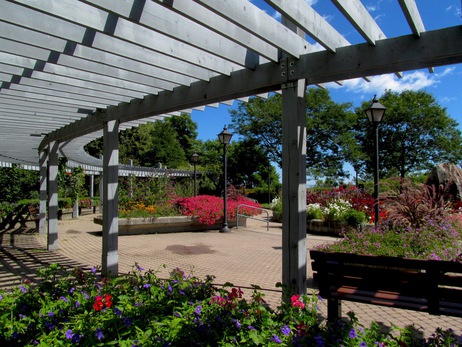 Founded in 2006 by the late Frank Butson, the Rosetta McClain Raptor Watch is one of several such "hawkwatch" groups around Toronto. According to the group's head, Walter Fisher, Raptor Watch members have observed 198 different avian species at Rosetta McClain, ranging from everyday residents like robins to much-anticipated visitors such as ospreys and golden eagles. Then there are the off-course oddities that are clearly very far from their usual stomping (soaring?) grounds. Mr. Fisher told me he once saw several cave swallows — whose native territory is Texas and Mexico — and on another occasion, a pelican. Even fairly mundane birds can put on a show. According to Mr. Fisher the park was once invaded by a roving flock of chickadees who whizzed around like little feathered missiles. While on another occasion, he witnessed the bizarre spectacle of a red-tailed hawk fleeing a hummingbird.

For those interested in joining the raptor watchers, the group recommends binoculars or a spotting scope — along with patience and enthusiasm.

Who knows what you'll see?