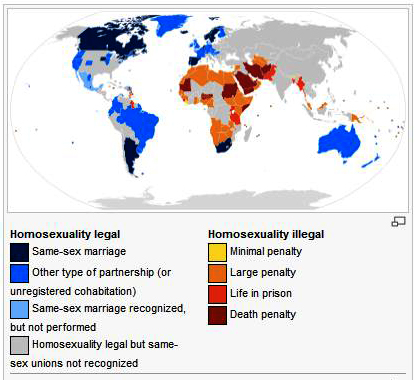 "Of course, it's a huge and a bit terrifying step – but I guess that's what all newlyweds go through," said Jane, a 36 year-old doctor just minutes before she said yes to her long-term partner, Julie. So far, more than six thousand homosexual couples have decided to start their official lives together in the City of Toronto, and many more are about to do so. Same-sex marriages became legally permissible in Canada on the 10th of June, 2003, after the court ruling in the Halpern v. Canada case as the Court of Appeal for Ontario recognized that marriage law violated the idea of equality, granted to all citizens alike.

Even though it is impossible to collect data on a large scale, as Ontario doesn't keep information about same-sex and opposite sex marriage numbers, Toronto has distinguished the difference in its internal statistics. It is interesting to note that in 2009, the overall number of gay men who got married in Toronto exceeded the number of lesbians, as 3,238 out of 5,564 marriage licences were issued to male couples.

Furthermore, we get to know about the typical living patterns of the homosexual community thanks to postal numbers of the newlyweds released under access-to-information legislation. In general, downtown areas are most densely populated by homosexual couples. Married lesbians dwelling in Toronto can mostly be found in M4Y, Church and Wellesley, as well as in Riverdale, South Riverdale, Leslieville, and the Beaches, together with the U of T area and Roncesvalles. Married gay men often reside in M4Y, east downtown, as well as in neighbourhoods to the south. Rates are also high in South Riverdale and Rosedale.

Concerning the nationality of the newlyweds, almost half of the people came from the United States and there were also certainly several British citizens, while others could not be identified by North American postal/zip codes. When analyzing the background of the U.S. citizens, quite a difference between women and men can be found. While lesbians from the U.S. mostly come from rural communities in the Midwest or from New York State, men usually came from more urban areas – e.g. Washington, Fort Lauderdale, Dallas, Houston, San Francisco, or Atlanta. Naturally, most U.S. residents from Massachusetts in search of marriage arrived before October 2003, when same-sex marriages were introduced there.

Even though some dispute credibility of the statistics, saying that such data aren't properly collected by City Hall and that they must be mostly based on estimates, the partial information that was successfully gathered are nevertheless interesting enough to note.