As well as the annual FanExpo event that occurs at the end of the summer, this year celebrating its 20th anniversary, Hobby Star Marketing offered a smaller but still very exciting event called Toronto ComiCon. With hundreds of exhibitors and thousands of attendees, this three-day "full-frontal nerdity" extravaganza at the Toronto Convention Centre showcases art, talent, and special guests from our most-loved comics and other nerdy interests.

This year's celebrities who made an appearance included Giancarlo Esposito (Gus Fring from AMC's hit show Breaking Bad), IronE Singleton (from The Walking Dead), Sean Astin and Billy Boyd (hobbits Sam and Pippin from The Lord of the Rings), and more. They were available for photo-ops and autograph signings, for a fee, and there were Q&A events throughout the weekend. The guests, although tricky to get close to unless you've paid for a photo, are seemingly enthusiastic and courteous with their fans. However, the stars of this show were really the fans themselves. 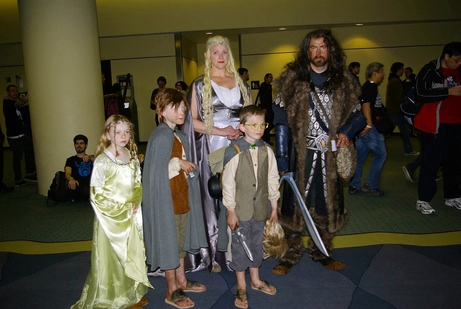 Lord of the Rings Family

From the walk from Union Station to the Convention Centre itself, you start spotting people dressed as superheroes and anime or fantasy characters from head to toe. A wandering Torontonian may think Batman wandering the streets a bit odd, but any ComiCon attendee knows that as soon as you walk into that convention, costumes become the norm. You can spot everything from Poison Ivy, Superman, Gandalf the Grey, Lara Croft, and Lego Batman to GhostBusters, with fans representing their favourite geeky characters. At ComiCon, it's Halloween again — except instead of candy, you're shopping for comics, plushies, science fiction collectibles, and fan art.

A highlight of the show is also the Sketch Duels run in private rooms up the escalator from the shopping floor. These are one-hour shows throughout the weekend where two well-known comic book artists show their skills on the spot by drawing something at the audience's request in 40 minutes, then raffling it out to the crowd. While drawing, they answer all your fan or art-world questions, like what it's like to be a comic book artist, advice for starting out, their least favourite superhero to draw, the funniest story about a fan, and so on.

Saturday's first Sketch Duel featured artists Kevin Maguire versus Tyler Kirkham drawing the Marvel character Venom. It was Maguire's first Sketch Duel, and he had a hard time drawing to his full potential under such a short time. However, he turned out to be a movie buff, and the audience had a good discussion with him about upcoming comic book movies (with Captain America, Spider-Man, and X-Men films all coming out in the next few months). The artists agreed that Ben Affleck has potential in the next Batman film, although everyone was pessimistic at first. Tyler Kirkham discussed his own graphic novel, Screwed, which is a modern version of the Frankenstein story with a female creature. Kickstarter and other crowd-funding avenues were a hot topic of discussion because artists and writers have taken to self-publishing, getting funding directly from fans, but the artists advised artists make sure they know the cost of shipping first, because faulty calculations in that area seem to be the biggest problem with these independent projects.

Ken Lashley versus Tony Moore was the second Sketch Duel of the day, and the audience gave them odd suggestions on what to draw — Wonder Woman eating ice-cream? Spider-man whacking a pudding monster? The Joker dancing with Batman? They finally settled on a cross-over sketch of Rocket Raccoon and Groot. The artists seemed to be very comfortable in the atmosphere, talking to the crowd about their families — like how Moore's young daughter is intrigued rather than disgusted by his graphic illustrations, and how Lashley steals the show at meet the teachers night at his kids' school. A child in the audience asked them, "What Superhero would make the best super villain?" Both artists vehemently answered, definitely Batman! The final pieces they created were amazing, and they were raffled off to two lucky winners to take home.

Batman at ComiCon 2014 by Thomas Gianfrancesco

Sketch Duels are a fun event that first-time convention-goers sometimes miss out on, where you get to learn about the work that goes into a comic book. If, at the end, you win a raffled beautiful piece of art, signed by your favourite artist, so much the better. Many of the artists had tables on the show floor where they worked throughout the weekend. There, you could talk to them, get art signed, or learn more about their personal side projects.

Whether you're a fan of comics, science fiction, fantasy, or well-made costumes, ComiCon is a fun event that Toronto is very proud to host each year. If you missed this year's convention, you can catch Canada's largest convention at FanExpo this summer, August 28–31. FanExpo will offer over 750,000 square feet of shopping and a handful of Sketch Duels as it celebrates its 20th anniversary.