You can lose sleep, lose your mind, and easily lose your car keys, but how do you lose a river, or even a creek? You build a city over it. 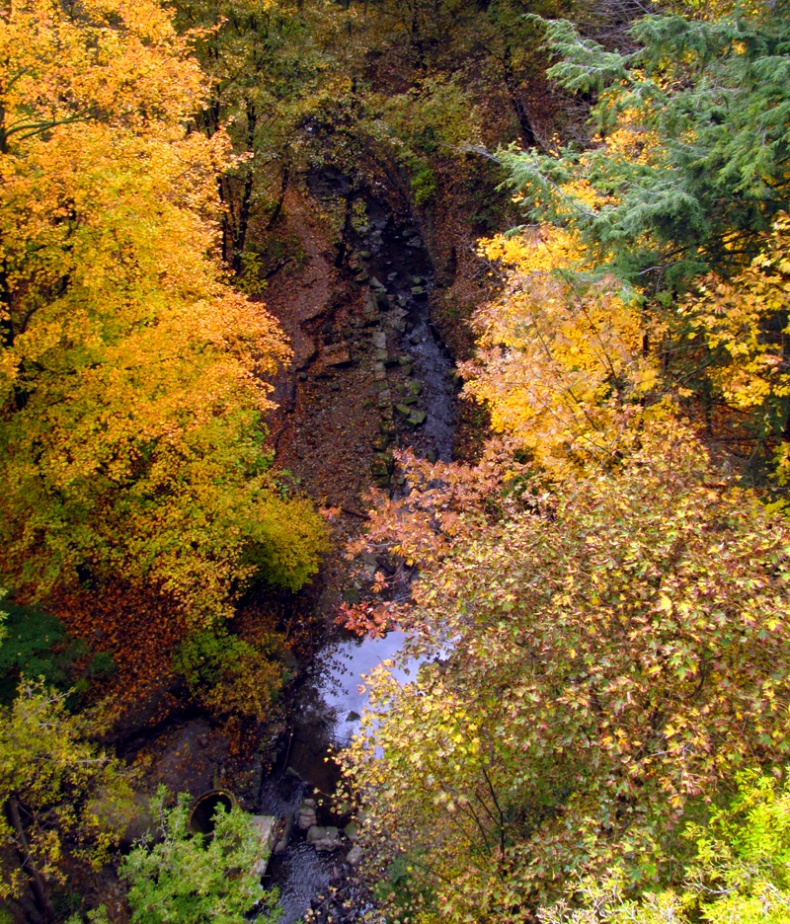 Yellow Creek in the Vale of Avoca

Old streams were traced, mapped, and explored through guided tours: The Lost Rivers Walks. Over the course of its history, Toronto and its suburbs have diverted, dried up, and paved over at least a dozen little waterways, many of which were tributaries of the Don River. A few creeks and streams have survived in the ravines, carving green grooves though the city and offering havens to wildlife and joggers, but many have, in fact, been lost.

I went for my first Lost River walk on a blazingly sunny day in October. By sheer luck, I happened to have chosen a tour led by Lost Rivers aristocracy: John Wilson, chair of the Task Force to Bring Back the Don, historian and Toronto waterway expert Ian Wheal, and (to my delight) Helen Mills herself. We were also led for the first part of the walk by David Leinster, the landscape architect who helped design Sherbourne Common — the little public park at the bottom of Lower Sherbourne street (right next to George Brown College) where the tour started. 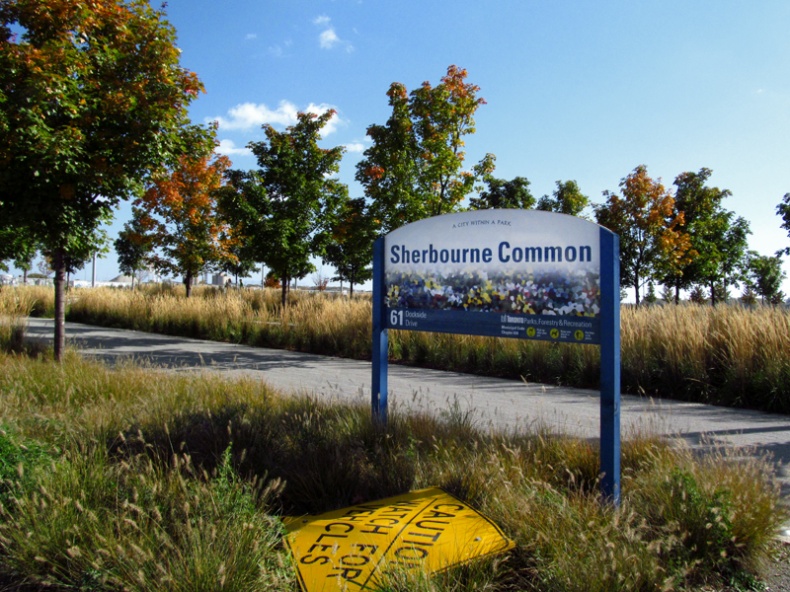 The Sherbourne Common walk is a new one in the Lost Rivers lineup — not surprising, since the Common was only completed in the summer of 2011. At its centre is the building called the Pavilion, built over an underground water-purification system that takes in both lake water and local storm water, cleans it, and sends it out into the lake.

According to Mr. Leinster, the Common and nearby Sugar Beach are two small parts of a planned waterfront promenade:

They are intended to extend almost the whole span of the lakefront from Harbourfront to the west, to the Portlands in the east.

He also informed us that the part of the lakeshore that the Sherbourne Common is built on is actually a "giant manufactured landscape" built by dumping tons of 'fill material' into the lake. Originally, the lakeshore was up around Front street, and everything south of it was underwater. 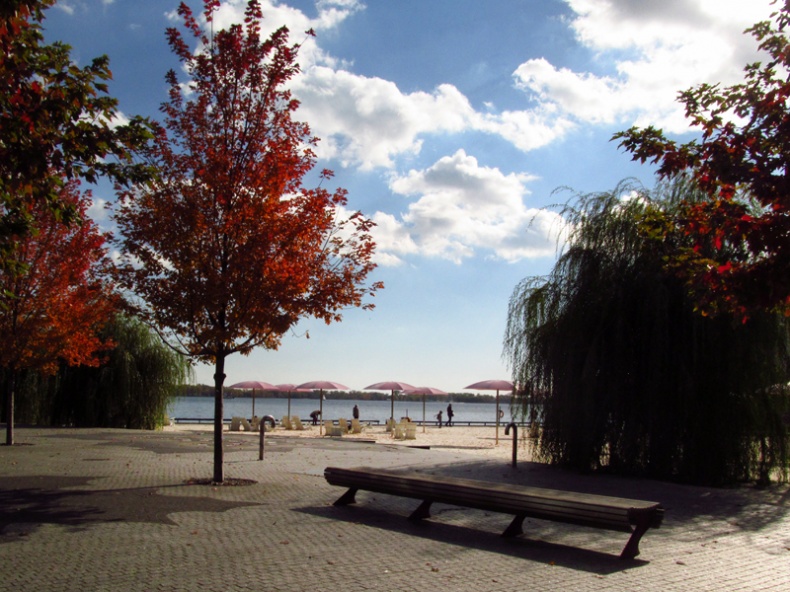 After discussing some of the history and context of the Common, the tour went west to Sugar Beach — so named for the Redpath sugar refinery next door. The beach itself is tiny: just a small, sandy patch by the water set up with chairs and shaded by its distinctive pink umbrellas.

According to Mr. Leinster, when the wind is right and the boats are bringing sugar in, there's a fine coating of it over the entire area. Swimming is discouraged thanks to the general contamination of the lake in this area (check the list of Toronto beaches that you can actually swim), but you can book the beach for special events.

We went back to the Common for a discussion of water purification and the Don Watershed and then across Queen's Quay to visit the northern part of the Common. Water from the underground UV filters runs from the Pavilion to the south over to the playground area in the north, where it's pumped up to the top of three towering abstract art pieces, which it flows down in decorative showers before heading back south to the lake.

You might wonder what underground filters and water features have to do with urban creeks, but then the Lost Rivers walks don't claim to be about only one kind of water. The group's website describes their goal as:

Helping people appreciate their intimate connections to the water systems that form an essential part of their lives.

The walks also tend to weave together local history, geology, geography, and ecology into what Helen Mills refers to as an "ecosystem perspective," which acknowledges the connections and dependancies that make city life possible:

A walk is often an exercise in imagination - walking and imagining what was there, and sort of putting together in your mind all the processes that make up the city.

Conservation is, understandably, a major focus of the Lost Rivers group (the Toronto Green Community is an environmental organization, after all), but there are no plans to start digging up the buried streams. 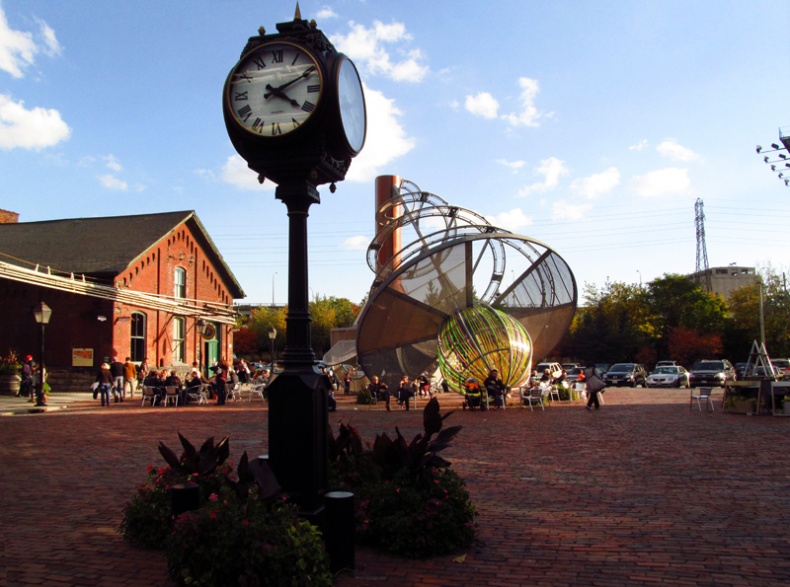 At the northern end of Sherbourne Common, David Leinster left us, and the tour was taken over by Helen Mills. We walked up Sherbourne, under the Gardiner Expressway (jokes about hardhats not withstanding), then along the Esplanade to a little green patch at the intersection of the Esplanade, Hahn Place, and Berkeley Street, where the now-buried Taddle creek once flowed into Lake Ontario.

A stop or two later (after passing the site of the original parliament buildings), we visited the Enoch Turner Schoolhouse, the first school in the city that didn't charge for enrolment (created in an act of philanthropy by the wealthy brewer, Enoch Turner). The tour's last stop was the Distillery District — an elegant, brick-paved area that was a thriving marsh back before the great fill-in.

As a finale, Ian Wheal told us about the old watchtower on one of the distillery buildings:

A meteorologist kept an eye out for storms, rogue waves, fires, criminal activity, and any other tragedies on land and in water.

With this, the tour was officially over, having taken about two hours, and having included a selection of anecdotes, bits of local history and geography, and the passing-around of several maps. 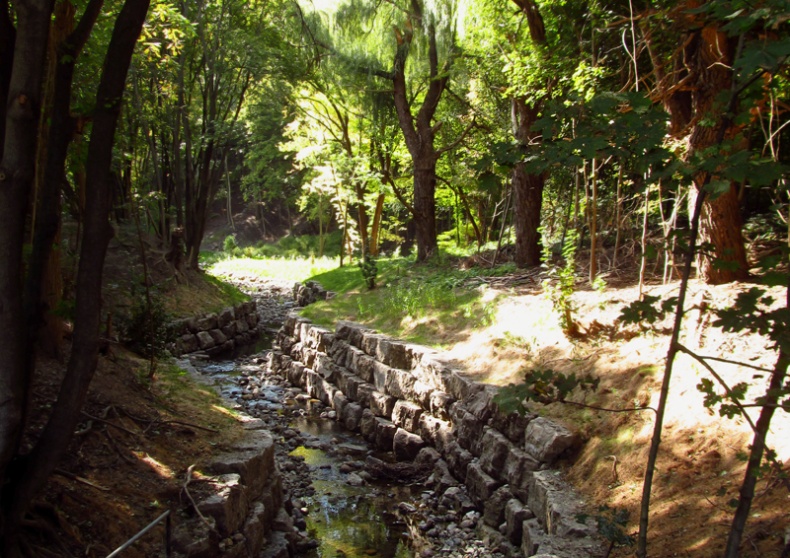 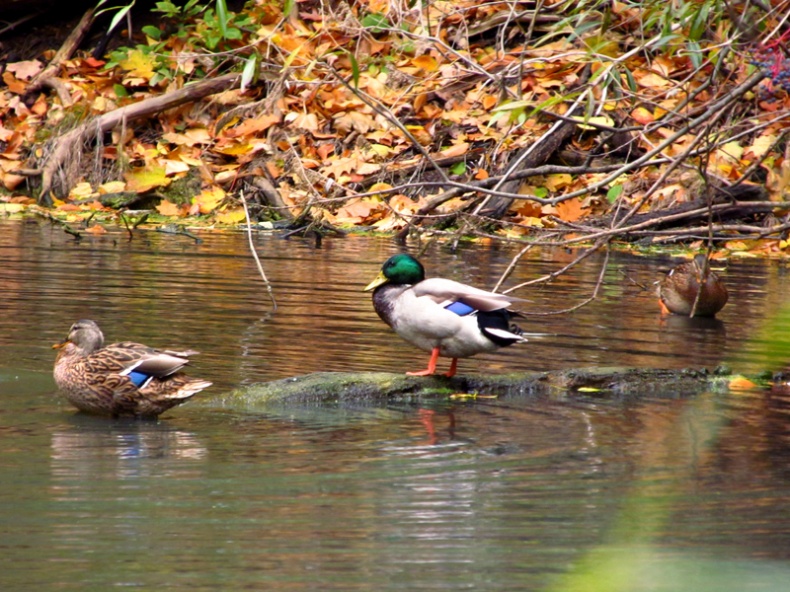 Mallard ducks in the beltline pond near Mud Creek

Not all Lost River walks are conducted on streets and sidewalks, with participants imagining how Toronto must have looked all those years ago. On the damp and unpaved side of things, the walks dip into Toronto's ravine system to explore the creeks and streams that (while often ignored) are not yet lost. In fact, Ms. Mills told me that some of the most popular walks are those that follow Mud Creek, a Don River tributary that spends a respectable (and quite scenic) amount of its time above ground.

No sign-up is required to go on a Lost Rivers walk, and no fee is charged. The walks run all year long, regardless of weather, and are described in advance on the Lost Rivers website, where you can find a brief history of the group too.

I confess to being a novice in the creek-walking department. Nevertheless, there are two ravines in the central Toronto area (the 'Old' city of Toronto) that I would highly recommend. 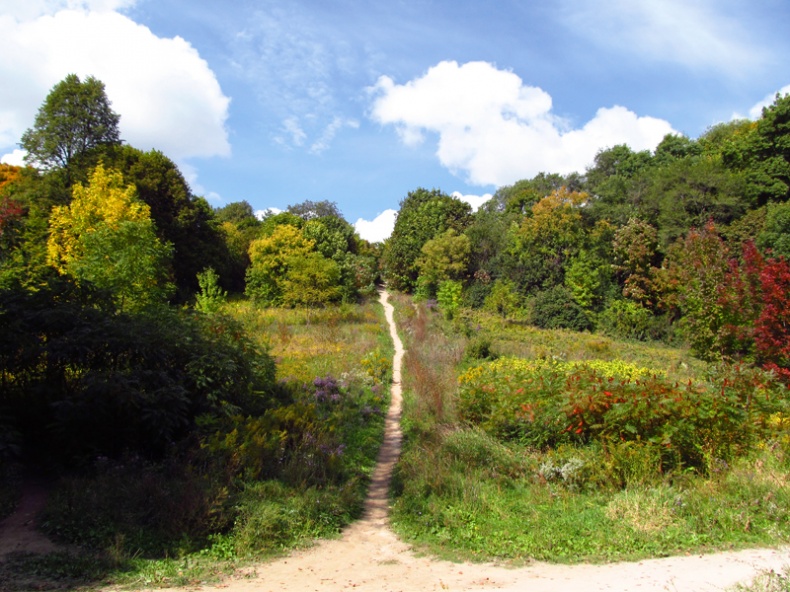 An offshoot of the beltline trail near the Evergreen Brickworks

It's easy to see why one of the most popular Lost Rivers walks is along Mud Creek: it comes out of its culvert at Moore Avenue, on the edge of Mount Pleasant Cemetery (a great place to walk in its own right), and runs through the wide, wooded Moore Park ravine.

The Beltline Trail running beside the creek is well maintained, and there are even occasional attempts at signage. Here and there, sandy, little trails leave the main path and head up the ravine wall, connecting this low, green world to the paved 'civilization' up top. Near the Moor Avenue entrance, there is even a little pond where I've seen both mallards and the much scarcer and more exotic-looking wood ducks.

The Beltline Trail eventually passes by the Evergreen Brickworks, and on Saturday mornings (when the Brickworks holds one of Toronto's largest farmers markets) the path is actually busy. There's almost always at least one other person in sight, and children and dogs gleefully gallop about.

One day about a month ago I wandered to the end of Heath Street (a dead-end street just off Yonge) and found a staircase winding down into a wooded valley. At the bottom of the stairs stretched a path — sometimes a boardwalk in places — running alongside a rocky creek.

On a later visit I discovered a vast, graffiti-decorated bridge rising out of the the ravine walls like a hidden ruin in the jungle. It was no ruin, of course, but a tiny portion of St. Clair Avenue, and the wooded valley was the romantically-titled Vale of Avoca, the ravine formed by Yellow Creek as it winds its way out of Mount Pleasant Cemetery to meet the Don River.

It's a terrible place to stray into when you're short of time, because each bend of the seductively twisting trail entices you onwards to see what lies beyond. Like the Moore Park ravine, the Vale of Avoca also has an entrance in Mount Pleasant Cemetery, as well as several other access points at intervals along the main trail. 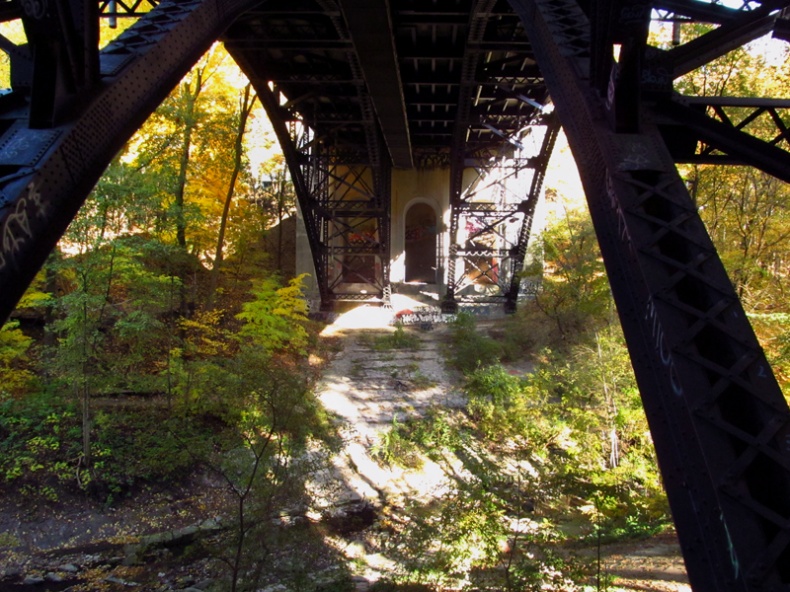 The St Clair bridge over the Vale of Avoca

A few days after my first Lost Rivers walk, I spoke to Helen Mills again and asked her if she knew of anyone whose outlook had been significantly changed by going on a tour. While I had some vague images of indifferent urbanites developing an awareness of water conservation, the story Ms. Mills actually told me was about the Toronto Field Naturalists, surely ecologically-minded people if ever there were any, and yet, in her words:

Many of them have never thought of the fabric of the urban landscape in the framework of nature and ecosystems — and so the exploration of the city itself was a new and exciting venture for them.

There was also a group of Ryerson University students — all recent immigrants — who found their Lost Rivers walk to be a mind-blowing experience. As Helen Mills recalls:

I've had comments about 'I was amazed,' 'I had never thought of it this way,' 'I was grateful.' Most people don't know about the creeks, so the first step is discovery, and appreciation. You can't really do any kind of restoration unless you've got the discovery and appreciation.

On the appreciation side of things, I think I'll head back to the Vale. I've haven't even explored half of it yet, and each curve is calling me to come a little farther… and a bit farther…