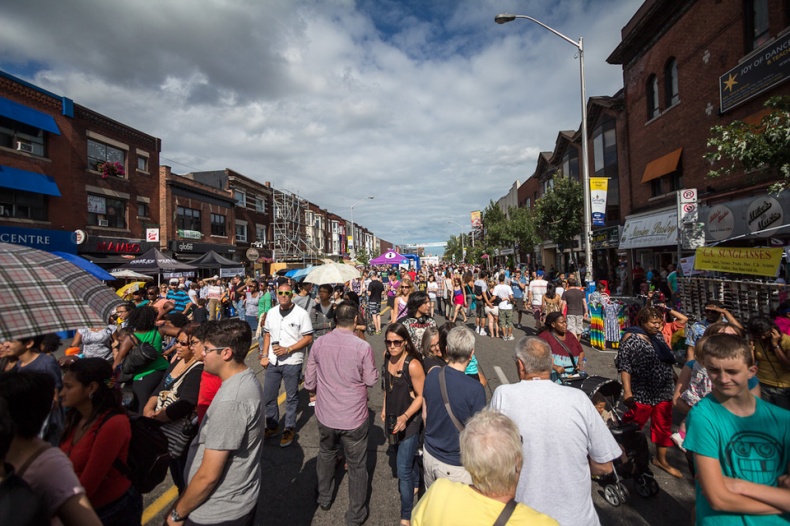 Streets full of people during Pilaros Taste of Danforth

We are introducing a brand new series of Photo Essays! Have a look at amazing Photo Sets all shot by talented photographers. Explore the vibe of the city, its hidden treasures, meet the Torontonians! This time, let's have a look at Toronto through the lens of Carlos Bolivar!

Summer Festivals and How the Weather Meddles With Them

Every summer, Toronto comes alive with a huge number of street festivals that attract large crowds and that are full of colours, new tastes, and good music right on the street corners. Torontonians enjoy spending a day out like this and can't wait for the festival season to start. We take pride in some of the biggest festivals in the country, including the Scotiabank Caribbean Carnival Festival, Summerlicious, BIG On Bloor, and the amazing Beaches Jazz Festival. It almost feels like there's something bigger or smaller happening every weekend (if not every day!) during July and August. Festivals are a perfect fusion of outdoor fun, performers, and music that you just can't miss when you're in the city.

But as we've seen this year, we rely on Mother Nature much more than we think. The Corso Italia Festival, for example, fell to the big Toronto flood of 2013. Toronto's biggest ever rainfall left thousands of buildings dark and stopped the subway and major highways. Many local roads and underpasses disappeared beneath the water. We still got some rainy and cold days after the storm, and that's unfortunately when this festival was held. Since we already planned to visit Corso Italia, we went anyway and brought you some images of how significantly the event changes after the weather decides not to cooperate. As a contrast, we took pictures of last year's Pilaros Taste of Danforth Greek Festival from our archives, another Toronto festival that had lovely weather and attracted thousands of visitors back in 2012. Feeling very sorry for the organizers of Corso Italia, we wish them only the best and sunny weather for 2014!

Corso Italia or Toronto's "other" Little Italy is an Italian community with some of the best places to get delicious and authentic food, such as Big Ragu, Marcello's, or La Paloma's Gelato. A celebration of Italian food and culture, this festival is among the leading multicultural events of the year. This year's theme was named Benvenuti!, the Italian word for "welcome." Usually, the streets swarm with lively bands and food vendors, offering a world of mouth-watering delicacies. Corso Italia gives you a chance to attend a classical Italian street festival.

Pilaros Taste of the Danforth

One of the largest cultural street festivals in Canada, Pilaro's Taste of Danforth turns the Danforth into one huge celebration. Did you know that Toronto has the third largest Hellenic community outside of Greece? They sure know how to enjoy life! With live acts, games, contests, and other special programs, this is a cultural event that shouldn't be missed! Growing every year, more than 1.3 million visitors flock here to get a taste of Greek culture. Dozens and dozens of tasty food stations from the Danforth's amazing array of cuisine line the street. Get to know what real spanakopita, loukoumades, and gyros taste like. Everyone who comes to the Danforth gets to be "Greek for the day!" 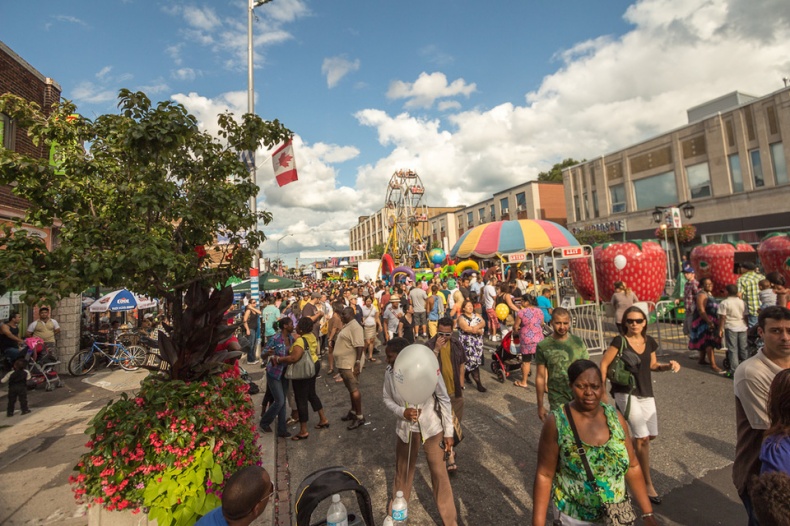 A sunny day out! 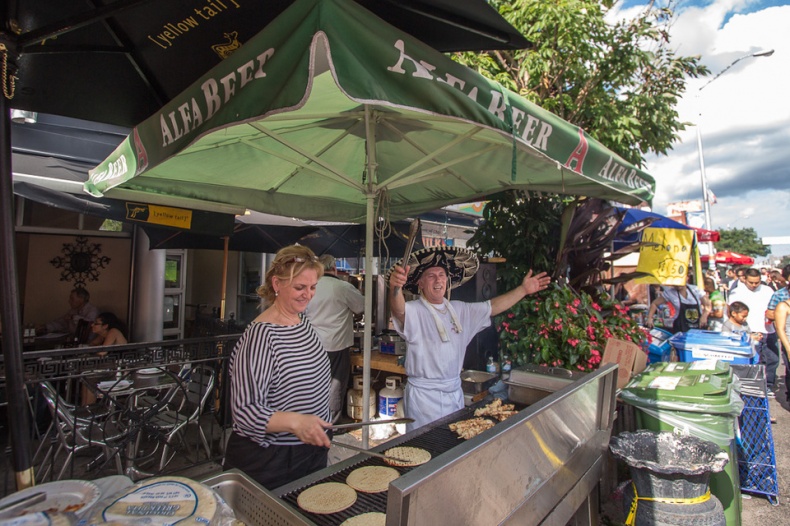 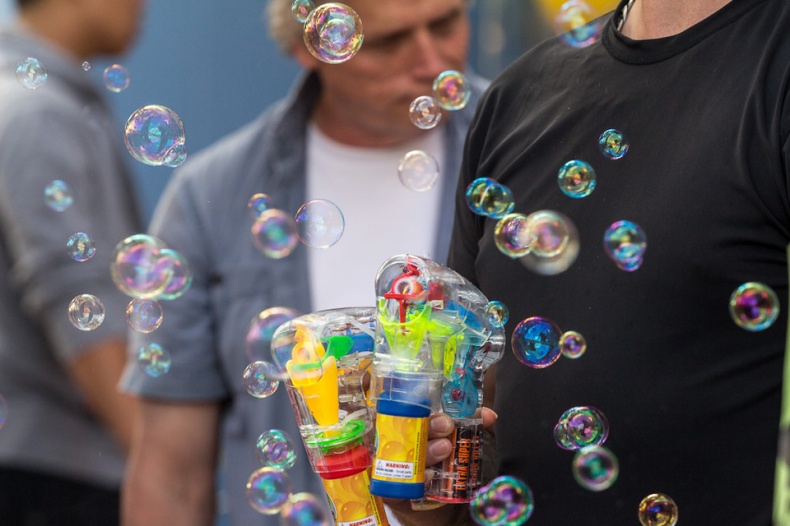 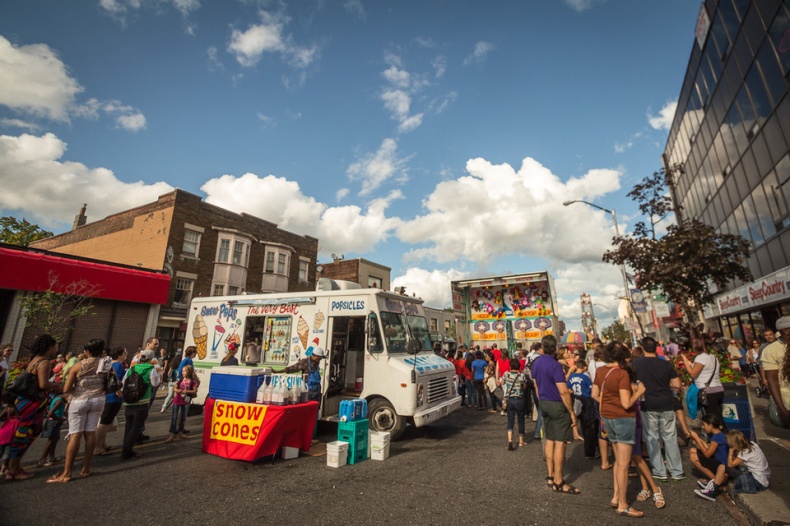 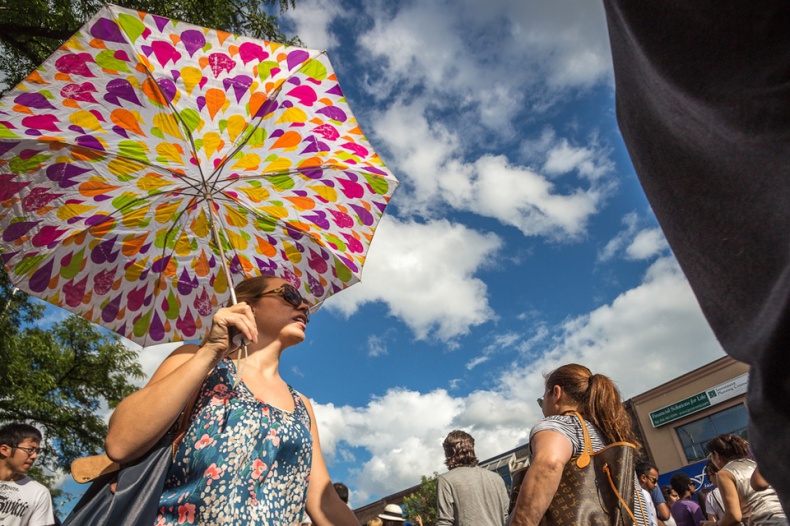 Umbrella, this time used  as a shield from the sun. 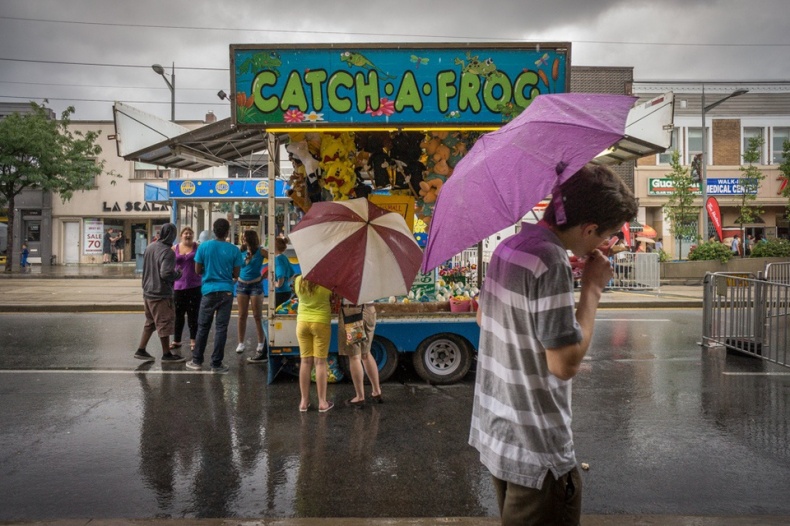 The rainy weather during this year's Corso Italia Festival 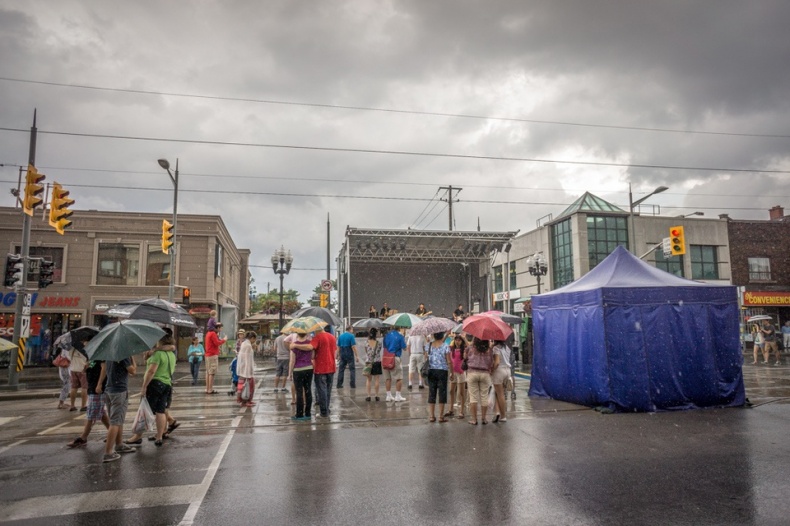 The crowd was small, but still, some people came! 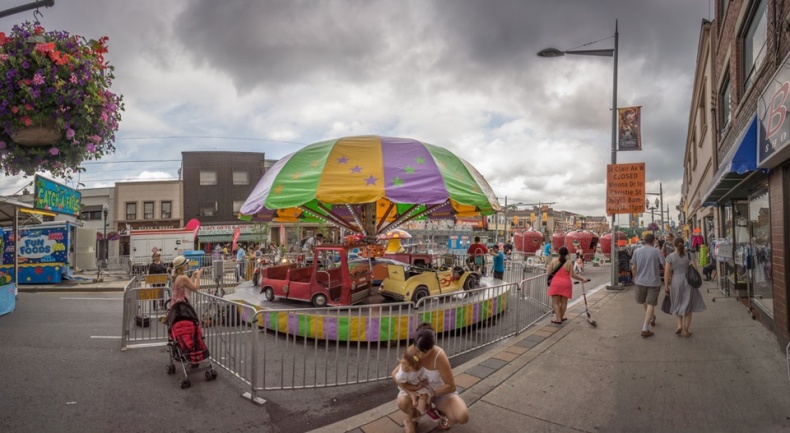 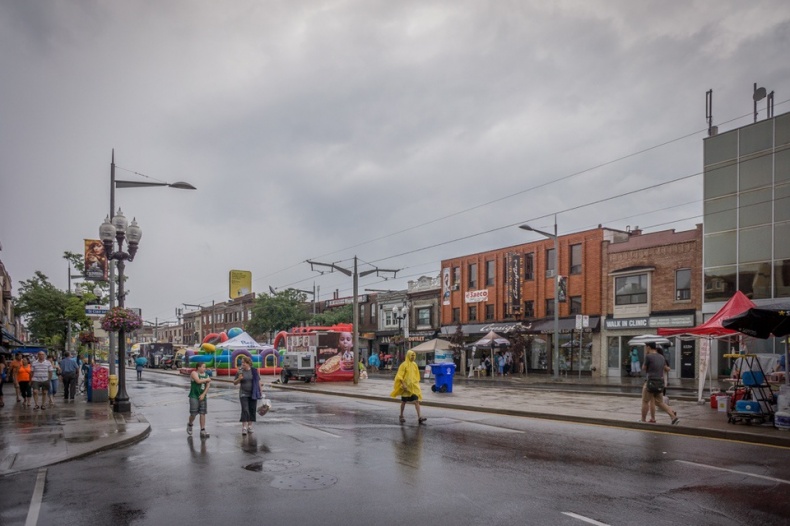 Raincoat instead of a summer dress! 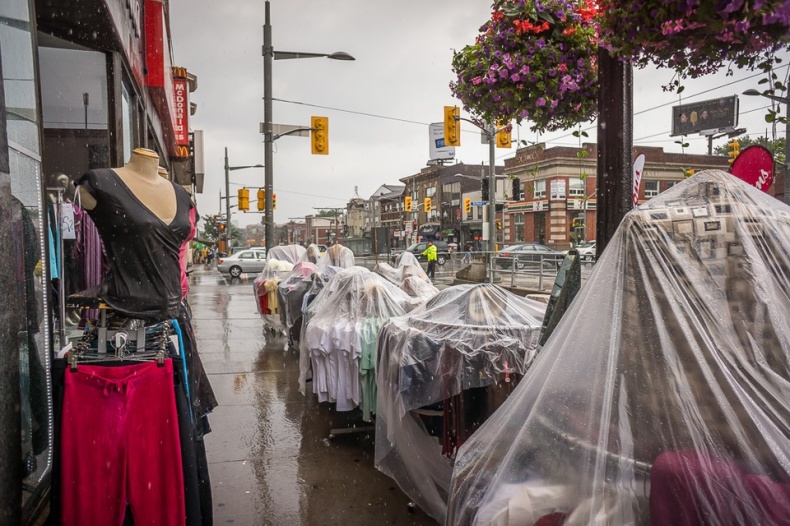 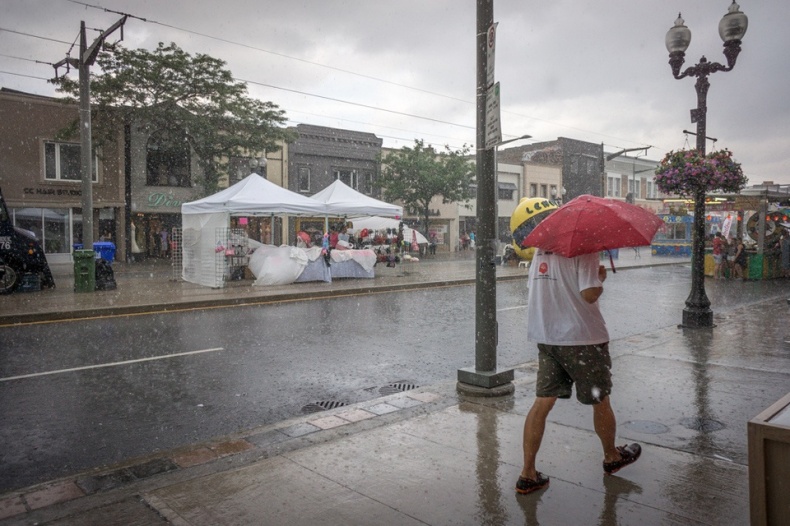 The worst possible conditions for a street festival. 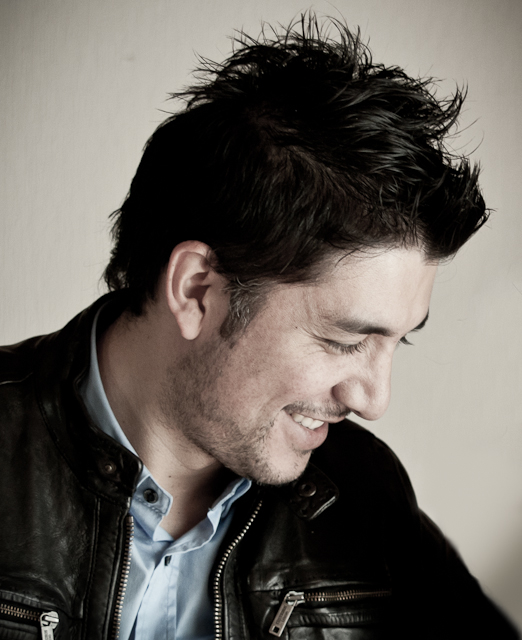 Colombian photographer based in Toronto, started with analog Photography in 2003, then jumping to the digital world in 2005. His photographic areas are mainly street, landscapes, portrait and beauty.