According to Toronto's official website, a little more than 10 per cent of the city is parkland, scattered throughout over 1,400 individual parks and public gardens. Some of these spaces are your standard playground and ballpark affairs, while others are mere green stamps amid sidewalks and high-rises. Then there are the other parks: big, strange, or unique. Some of them may even let you forget you're in the city. 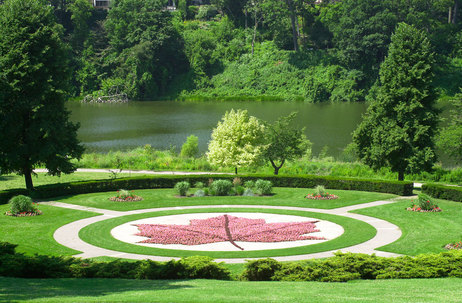 Toronto: High Park by The City of Toronto

As a slightly belated celebration of summer, I'm going out to explore some of Toronto's larger, odder, and more spectacular parks, starting with one of the newest additions to their ranks — a park that has the distinction of being mostly paved. It also has a roof. With cars on it.

The Rundown Corktown Neighbourhood Gets a New Addition

Toronto's new Underpass Park lurks shyly in the shadows underneath the Eastern Avenue, Adelaide Street, and Richmond Street overpasses in the Corktown region of Toronto. This is an old neighbourhood. Once home to many Irish immigrants (as well as a few breweries, hence the name), Corktown has been what Toronto Life magazine referred to as a "don't-walk-here-at-night zone" in recent years. Now, though, with the Pan Am games coming to Toronto in 2015 and the new Athlete's Village going in just to the south, half the place seems to be under construction. There are several new condos going in, as well as Habitat for Humanity housing, a March of Dimes residence for the disabled, and Dixon Hall communal housing. Since many more people will now be calling the Corktown area home, it only makes sense to provide them with some pleasant public space — which is where the story of Underpass Park began. 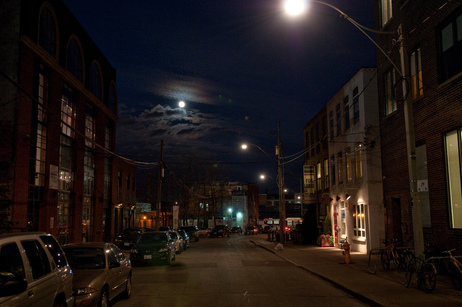 Corktown in Moonlight by David Porter

How Did an Underpass Become a Park?

Because I wanted to understand some of the work that goes into creating a park — especially one built underneath two functioning roads — I spent a pleasant hour talking to David Leinster, a landscape architect, planner, and partner at The Planning Partnership, and Michael Ormston-Holloway, a landscape architect and arborculturist with the same firm. The Planning Partnership is the main consultant for the public spaces going up in and sprawling out of the new developments in the West Donlands (of which Corktown is only a part), and a central player in the creation of the Underpass Park. 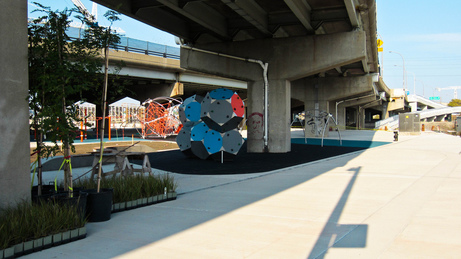 Unlike many other parks that have taken years to plan and build, Underpass Park sprang into being rather quickly. Those in charge discovered that they had extra government grant funds left over — but only if they used the money within a specific timeframe. With a deadline looming, the administrators created the park in a fraction of the usual time — about three years, in Leinster's estimate, from the initial conception phase to its opening in the summer of 2012.

Since this is the first park under an overpass in Toronto — and one of very few in the entire country — the designers had few models to turn to. But Leinster did mention Vancouver's much larger Granville Island Park as a source of inspiration. For designers, the underpass space came with quite odd and specific limitations. The roads overhead blocked out much of the light, the land sloped upwards towards the river as a protection against flooding, repair crews had to have easy access to the roof and the many supporting pillars, and the ground underfoot was former industrial land, and so somewhat contaminated. 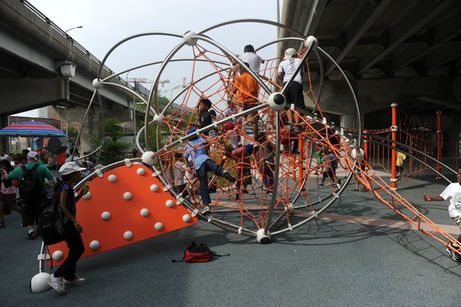 While sometimes awkward, the shape of the space itself provided some inspiration for the finished park (Leinster referred to it as "cathedral-like," only more "squat"), and the slope helped accentuate the separate courts installed on the east side. The flatter west side contains benches, playground equipment, hopscotch squares, and an empty space that may one day serve as a farmers market but which was, on the day I visited, a roller-blade practice area. There's also a skateboarding space on the east side, which was, according to Ormston-Holloway,

One of these sort of beautiful moments in the project where it wasn't part of the initial plan — in fact, we looked at ideas for ball hockey courts... expanded basketball courts, but then we really started to think about... disenfranchised youth, and that's when the idea of a skate park really took off. 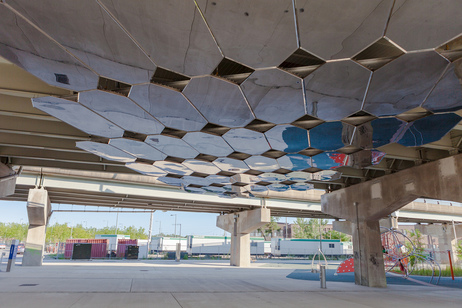 Before any sort of construction could really start on the park, developers had to deal with the soil itself. According to Leinster, they achieved this "massive" and "hugely expensive" enterprise by covering most of the polluted ground with concrete, and by physically removing some of it for cleaning (in 2012, the park received a Brownie Award from the Canadian Urban Institute for its brownfield cleanup). As it stands now, most of the park is paved, leaving only a sliver of green space in the centre portion between River Street and St. Lawrence Street, and a little grassy hill on the as-yet-uncompleted west side of St. Lawrence Street. Apparently, the original plan called for black locusts in both areas, but local nurseries couldn't provide enough of these particularly pretty and hardy trees, so the park currently contains some honey locust and Kentucky coffee trees as well.

Those of you thinking of visiting the park may wish to check out its page on the Waterfront Toronto website.

It was very organic, and I think it is one of the most wonderful, inventive, and creative parks in our city.

says Pam McConnell, Toronto City Councillor for Ward 28, which includes Corktown and Underpass Park. Her enthusiasm for the project is considerable. She spoke of the park repeatedly in terms of magic — "magical moments" and "magical places" where abandoned urban ugliness transformed into a creative and welcoming environment. In McConnell's view (and she's admittedly quite biased in the matter), Underpass Park is more than just a pleasant place to be. It brings increased well-being to the community. She told me,

I don't like overpasses, and this particular overpass did a great deal of destruction to that community because it bisected it into two, and made it impossible to go from the north to the south.

By being a safe and welcoming passageway, as well as a destination in its own right, Underpass Park is undoing some of the highway's damage and encouraging pedestrian flow. This idea of movement reconnecting a severed community was also something Leinster mentioned, when he told me that one of the driving inspirations behind the park was working out "how to encourage people to move back and forth under this nasty overhead thing." 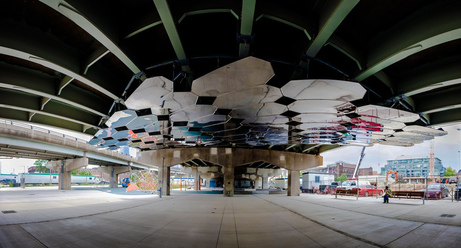 Is it working? Are people coming to the park, and will this really invigorate the changing neighbourhood? Only time will tell the full story, of course, but the first chapter looks promising. Ormston-Holloway said that the skate park area is generally busy whenever he drives by (and he makes a point of driving by). In fact, it was in use before any of the park's other amenities. "Even before the park was open — and I mean, like, locked fences — there were the exact age range that we were hoping to get in there actually climbing the fences and skateboarding." The park administrators have already had to install skate deterrents on the benches. All things considered, this is probably a good sign.