This may or may not be a very accurate description of the lobbyist's life, but it does give you a pretty fair warning about the type of movie you just sat down to watch. Miss Sloane, directed by John Madden, is indeed a movie based on plotting and manipulation, following the brilliant but ruthless Elizabeth Sloane (Jessica Chastain) as she ditches her big-business-boosting firm to take on the invincible pro-gun lobby in the U.S.

There's a lot of Toronto in Miss Sloane, and while some scenes were shot at GTA locations such as Pearson Airport and the Parkwood Estate in Oshawa, you can cover an awful lot of the others in a couple of hours of wandering about downtown.

By most definitions, I imagine that 'downtown' starts above Bloor, but for Miss Sloane's purposes, it starts at the Gardiner Museum at 111 Queen's Park Crescent. Although it's considered to be Canada's foremost ceramics museums, the Gardiner only gets a couple of party shots in the movie – unlike our next destination.

Sitting at 266 Spadina Avenue, the Goldstone Noodle restaurant claims to be the best Chinese restaurant in Toronto. While there are undoubtedly lots of rivals for this title, the Goldstone does have the privilege of playing itself in the film – albeit an American version that Sloane loves for its all-night hours. The place shows up twice in the film, and we get to see a fair bit of it on both occasions. 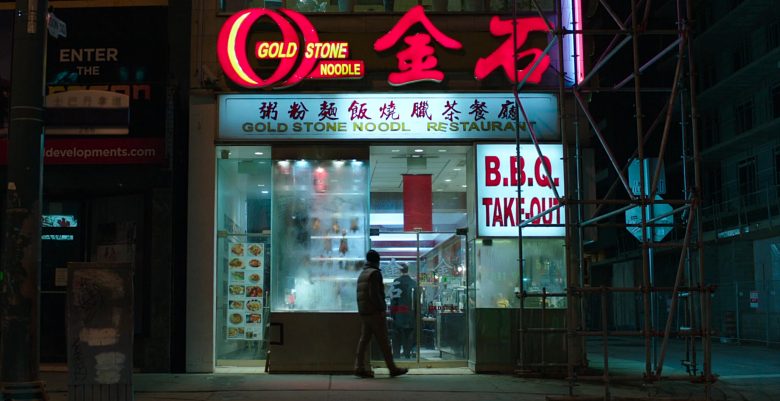 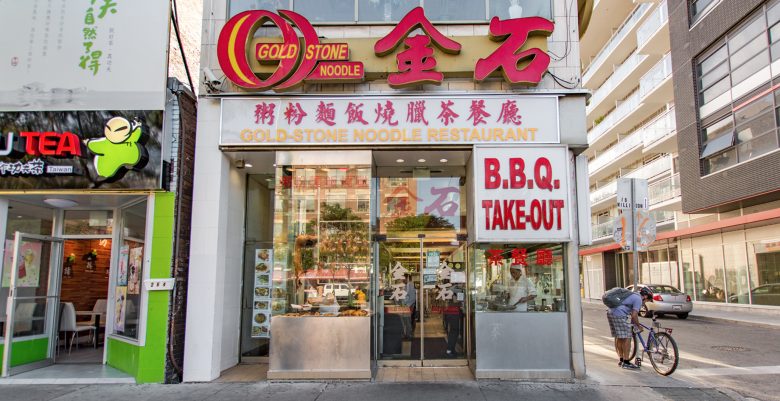 University Avenue's Shangri-La Hotel and condo definitely does not play itself – it gets a new sign disguising it as the 'Alexandrian Hotel' and the exterior, along with University Avenue itself, sets the scene early in the film when Sloan meets the gun-control lobbyist Rodolfo Schmidt (Mark Strong). While Miss Sloane is a character-centred legal drama, it still follows the good old formula of the super-humanly gifted anti-hero throwing in their lot with a group of righteous underdogs struggling against a monstrous and implacable menace.

Needles to say, I don't recommend this movie to anyone averse to gun control. While there are some ethical shades of gray being dealt with on screen, they have little to do with firearms, and everything to do with Sloane's personal motives. She is a proper anti-hero, in the sense that her methods are considered callous and unethical by her own allies, and the question "does she actually have any morals at all?" is a running theme throughout the movie.

A note before moving on: I was happy to see that the filmmakers made use of Zhang Huan's grand, whimsical sculpture 'Rising' in the background. It's far more distinctive, not to mention fun, than the Shangri-La's facade, and makes the location extremely easy to place. 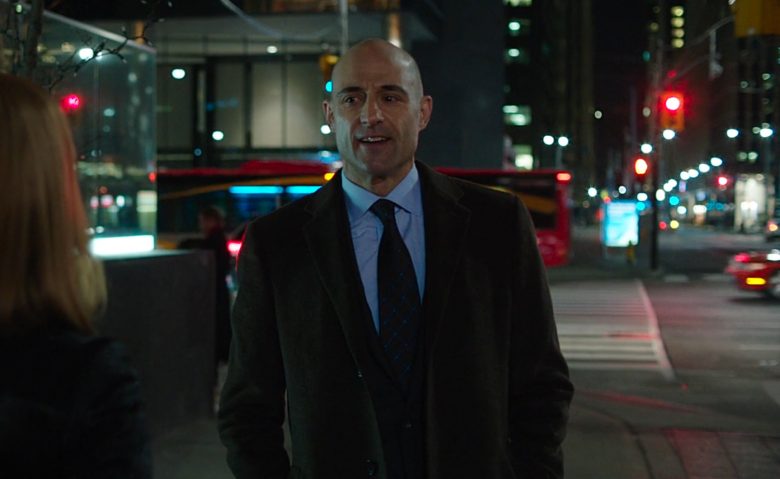 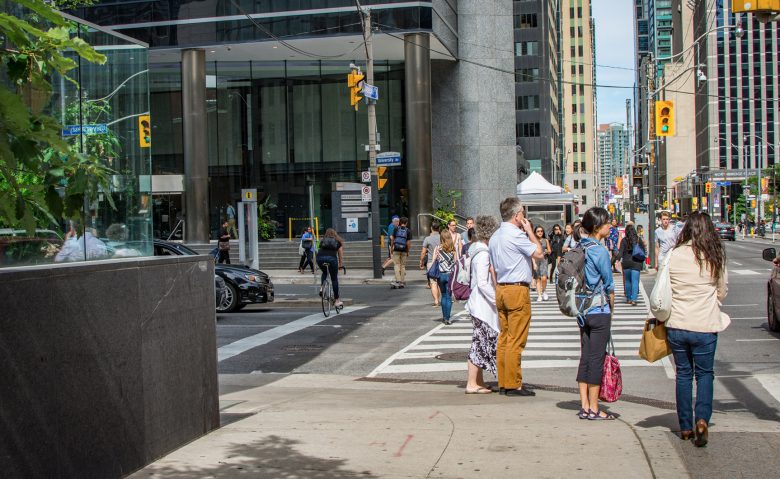 In the film, Sloane and Schmidt turn off University onto Adelaide, but if you stay on University until it merges with Front Street, you'll find yourself at one of Miss Sloane's most luxurious Toronto locations.

Opened in 1929 by the Canadian Pacific Railway on the site of the old Queen's Hotel, the Fairmont Royal York was once the tallest building in the British Commonwealth, and has been popping up in movies for years. In Miss Sloane, it has the distinction of playing two different parts: the first-floor Imperial Ballroom with it's mesmerizing carpet is the setting of a congressman's fundraiser, while the spiral stairs and tall clock in the lobby show up later on, claiming to be a completely different building.

Just west of the Royal York, a stairway leads up from the Front street sidewalk to a sprawling, elevated public space that half-surrounds the Royal Bank Plaza towers at Front and Bay. Sloane and her fellow lobbyists have a clandestine outdoor plotting session in this spot, which makes good use of the severe square planters and the wall of the Royal York rising up dramatically to the west.

Plotting is actually one of my few complaints about Miss Sloane. Part of the fun of watching a movie like this lies in trying to figure out how much of the on-screen goings-on are actually part of somebody's plan, but the filmmakers unfairly thwart such attempts by deliberately (and, I would say, dishonestly) misleading the audience on a few occasions. Having said that, they did warn us with that opening quote, and even if you're not trying to plot one step ahead of the characters, the movie is never dull.

When it comes to the on-screen plotting, good guys plot out in the open, or in their bright, cheery office at 55 University Avenue. Bad guys plot in Hy's Steakhouse at 120 Adelaide St. West. This is the second Toronto home for Hy's, which started out in Edmonton, and has been serving some of Toronto's most expensive steaks for over sixty years. The Richmond Adelaide Centre which was built around the spot in the sixties and seventies also gets its five minutes of fame in Miss Sloane, in fact, the lobby and sidewalk outside get a far more important scene than the steakhouse, featuring Sloane's co-lobbyist Esme (Gugu Mbatha-Raw).

Next to Sloane herself, Esme is probably the most prominent and developed characters in the film, and Mbatha-Raw makes her both believable and sympathetic. In fact, this could be said of all of the film's protagonists; the acting all round is solid and engrossing, and if the pro-gun gang seems rather one-dimensional in their evil, it's more the fault of the script than of the actors.

Of course, this is not a big ensemble show, and all the talented co-stars in the world wouldn't be able to rescue it if Chastain wasn't in fine form. Luckily, she is, making Sloane interesting to watch - despite the fact that she'd probably be utterly intolerable in real life.

Side Note: I'm not much of a makeup person, but I realized about half-way through the movie that Sloane's makeup is important. It's part of her unbreakable persona; the armor she puts on against the world, and the few scenes were she isn't sporting blood red lips and a false complexion show her at her most honest and vulnerable. It's a nice touch.

The final leg of the Sloane tour takes you up Bay to Wellesely and the Mowat Block building at 900 Bay. In real life, the Mowat Block is an Ontario government tower that houses the Ministry of Education, amongst other things, but in the film one of its incredibly shiny hallways pops up a few times, pretending to be somewhere in the Senate. 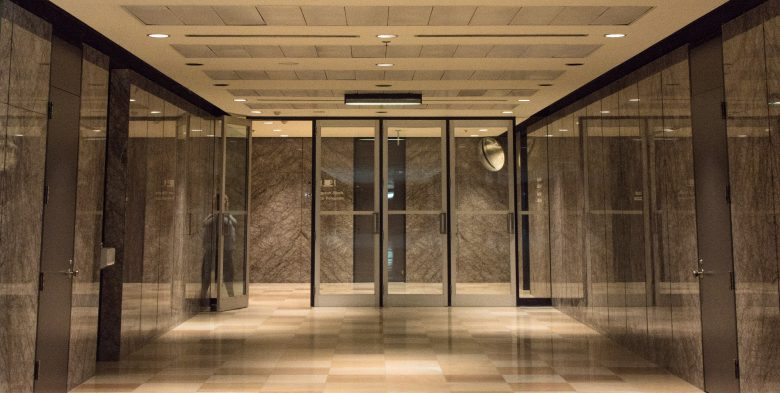 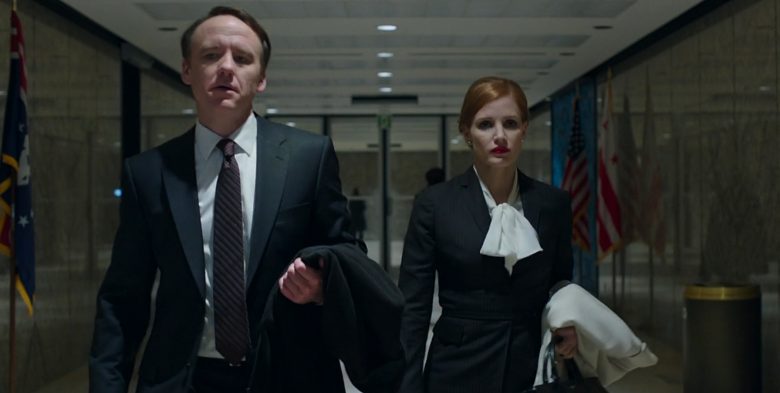 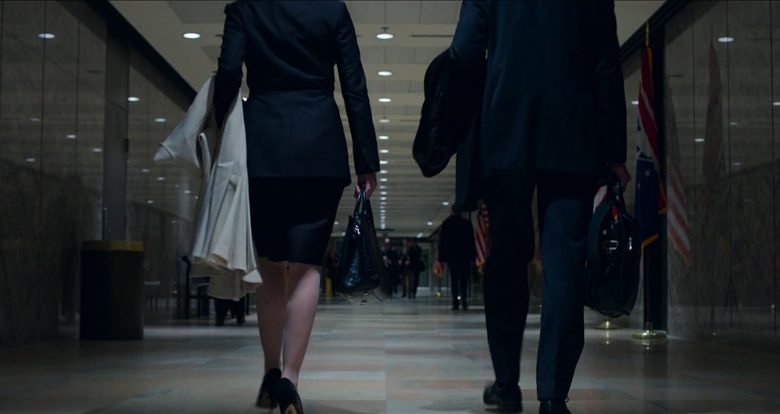 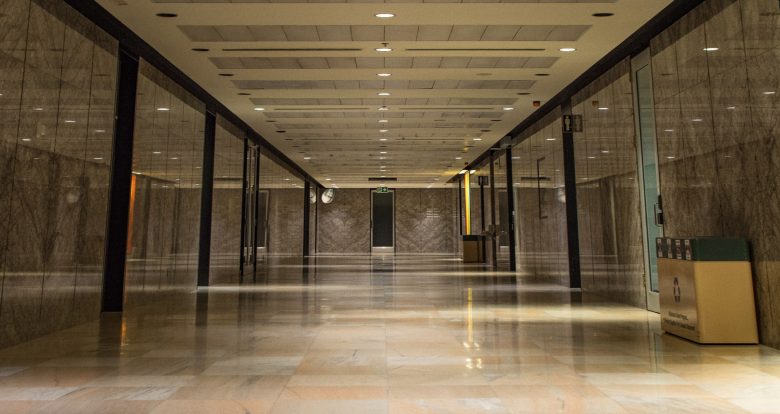 There isn't a lot of colour in this movie. Like the Mowat Block hall, Sloane herself tends to dress in black and white, and the whole palette of the film is skewed towards shades of gray. Max Richter's low-key score seems like an auditory extension of this colour scheme, enhancing the moods on screen while being completely bland and unmemorable. While this sounds like a rather harsh assessment, the film doesn't really need a grand, lyrical soundtrack to carry it along. The writing and acting are such that I never even thought about music until the movie was over, and while I still think a less minimalist approach would have been nice, I'm not entirely sure it would have been appropriate.

Lots of movies end happily ever after with a big church wedding, but Miss Sloane is a bit too much of a cynical realist for that, so her film ends at a prison, portrayed by the University of Toronto's Carr Hall. I'm not sure if this means that someone in charge of film locations had a particularly bad post-secondary experience, but Carr Hall is actually one of the more filmed buildings here; the last ten minutes or so of the film take place entirely in one of its classrooms, one of its corridors, and just outside the front door.

Good endings are hard. There are probably sad libraries full of books and films that started out well and ended in disaster, and thankfully, Miss Sloane isn't one of them. While I can (and do) groan at some of the manipulative cheating the film indulges in to keep the audience off-balance, said cheating is done in the service of a fairly satisfying ending which manages to follow an ancient formula without being utterly predictable. We never learn what makes Sloane as driven to win and as indifferent to others as she is, and there is no sentimental, cliche-ridden scene wherein she breaks down and vows to become a kinder, gentler person. She does not settle down to start a family, nor does she adopt an orphaned puppy. She does change, and it's probably for the better, but we never know exactly how much, or if it will even stick. At the end of the film, she's still Miss Sloane.