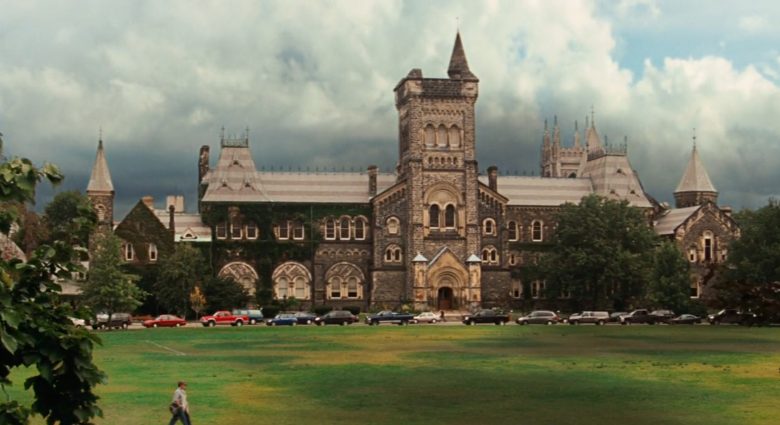 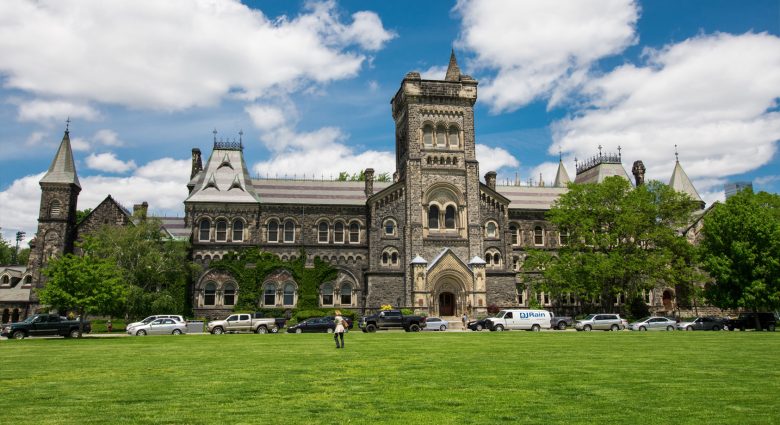 The Incredible Hulk (2008, Louis Leterrier) was filmed in New York and Rio de Janeiro, but it especially has an abundance of Ontario scenery - from Toronto and Hamilton to Trenton and Belleville.

Banner's reunion with Betty takes place on the Cherry Street bridge, and later on, they get stuck in an army-induced traffic jam underneath the Gardiner Expressway. The climactic fight between the Hulk and the Abomination actually starts off on Yonge street.

There's also quite a bit of U of T in the background. Leterrier's team made good use of the place, with Convocation Hall and the Koffler Student Centre forming the exterior and interior of one New York lab, while University College and Knox College are parts of the fictional 'Culver University' where Betty Ross works.

At one point, Banner infiltrates Knox disguised as a pizza delivery man and runs into Lou Ferrigno – the big green bodybuilder from the old Hulk tv show. Finally, General Ross actually traps Banner in a glass overpass that was somehow added digitally on top of the Knox quadrangle walkway. I have to wonder if the spirit of mischief has ever possessed any theology students to leave a few giant footprints lying about the place...

It seems a strange thing to say about a story dedicated to a giant green monster famous for smashing stuff, but this is a pleasant movie. It has lots of interesting, quirky little flourishes that make it seem, whatever one thinks of the characters or plot, like a thought-through, inspired creation.

As director Louis Leterrier states repeatedly in his commentary on the film, just about everyone knows the basics about the Hulk: Dr. Bruce Banner is a brilliant scientist who got hit with a huge dose of comic-book radiation that turns him into an indestructible rampaging green giant whenever he gets angry.

Well, it used to, anyway. Leterrier and his screenwriters took the understandable but ill-advised path of actually dropping the direct emotional connection, and instead made it a high heart rate that triggers the unwanted transformations. They also decided, wisely, I'd say, to avoid rehashing the story of the Hulk's origins, which had already been covered by the 2003 Ang Lee movie, and instead focused on a point a few years after the Hulk's dramatic first appearance.

To bring people up to speed, the opening credits give a fast and classy explanation of the story so far, and then we're off to some wonderful location shots in Brazil, where Banner (Edward Norton) is lying low and trying to come up with a cure for his "condition".

I quite liked this part. The movie spends a decent amount of time building up and visually describing for us Banner's life, and in doing so includes lots of incidental, character-building details so often lacking from action-oriented movies. Through scenes that have either incidental dialogue or no dialogue at all, we get a better feel for who Bruce Banner is in the first 20 minutes of the film than we do in the rest of the movie.

We also get some interesting hints about his antagonists, too, and here again, the movie is distinctive and relatively understated. Villains have tended to get short shrift in comic-book movie adaptations, with the exception of the X-men's glorious adversary Magneto, and while those in The Incredible Hulk didn't quite satisfy me, they did come close. For one thing, we're not dealing with any variation of the standard megalomaniac out to conquer the planet, destroy the human race, or seek revenge for past wrongs. We're not even dealing with crime lords or terrorists.

The Hulk's traditional foe is the U.S military, especially the belligerent and narrow-minded General Ross (William Hurt). Ross wants to use the Hulk as a weapon, or at least, extract a means of Hulkifying some of his soldiers. Banner, understandably, wants to avoid this, and his evasions are so successful that Ross enlists the help of a crack British Royal Marine named Emil Blonsky (the reliably villainous Tim Roth), who Hulk fans will recognize as the absolutely-not-mild-mannered alter ego of Hulk's long-time enemy The Abomination.

I won't say more because this movie is worth seeing and not spoiling, but I will say that Banner seems more interesting by himself than in the company of other important characters. This is doubly unfortunate because the person he spends the most time with is his former girlfriend Betty Ross, played by the scenic but uninspiring Liv Tyler. All right, I'll probably get in trouble for saying this, because I'm sure Ms. Tyler has legions of stalwart fans, but I'm not one of them. It's true, Betty isn't written as a very detailed or fun character to start with, but Tyler's breathy delivery and lack of spark make it worse. She has one good, surprisingly funny scene, and that's it.

Given its subject matter, The Incredible Hulk is inevitably a big special-effects movie, and for the most part, it looks pretty good - there were a couple shots of a helicopter that reminded me of an HD computer game, but that's it. Actually, CGI is only inevitable now. There was a Hulk tv series back in the 70s, which Leterrier homages in several ways throughout the movie. There, the Hulk was played by a tall, green-painted bodybuilder with a fluffy wig and eyebrows you could lose your dog in. But I digress. I haven't seen the Ang Lee Hulk movie in its entirety, but I've seen some bits, and I think I like the look of Norton's Hulk better.

Having said this, I don't like him as much as Mark Ruffalo's more recent version in the Avengers movies. Not only is he the most 'real' looking of the bunch, but he also seems to be the scariest. For all that Norton's Banner warns us that the Hulk is too dangerous and uncontrollable to be released, he really doesn't seem like that bad a guy. He only threatens people who directly attack him, fights to neutralize opponents and then escape, and generally comes across as a miserable, misunderstood creature who might be quite decent if people would only stop shooting at him. In contrast, Ruffalo's Hulk is more firmly linked to the original's rage and acts less like a giant human than a berserk gorilla liable to pound anything, or anyone, standing in front of him.