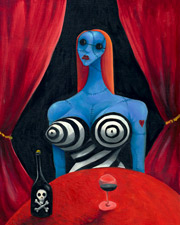 Tim Burton, that macabre cinematic genius, was born and raised in the rural suburbs of Burbank, California. After years of hard work he has written, directed, or produced critically and commercially successful films like Sleepy Hollow, Edward Scissorhands, The Nightmare Before Christmas, and his most recent venture, Alice in Wonderland. He is also married to the lovely Helena Bonham Carter and recently became a father. All in all, he's a great example of a success story. But how did he get to the top?

The Museum of Modern Art (better known as MoMA) in New York City organized an exhibit to answer that question. Pulling together various artifacts from Burton's private collection, costume designers who worked on his films, and other donors, they succeed in painting a portrait of the man whose unique style has made him a standout among directors.

The show was a huge success in the Big Apple, with Burton securing a space as one of the highest crowd drawers in the history of the museum, third only to Picasso and Matisse! This triumph prompted the exhibits' move to downtown Toronto last November. Over 700 items from the original display have made their way into our lovely city, all for film and in particular, Burton lovers, to enjoy. Personal drawings dating back to the 1970s and 1980s, sculptures from his first stop animation films, notes to his actors (including one to Johnny Depp regarding a line in Charlie and the Chocolate Factory), and iconic costumes such as Edward Scissorhands' suit and Ed Wood's infamous angora sweater are all there to see. TIFF Bell Lightbox, the venue running the exhibit, does an excellent job incorporating objects with media: as you peruse sketches and poems, television screens play his Timex commercials, music videos, and early shorts.

One of the highlights is an extremely rare reel of his first films, made in high school, which he wrote, directed, and even starred in. They're an intimate touch and easily one of the best parts of the exhibit. A special collection within the exhibit focuses on Burton's time in Burbank establishing himself as an artist and animator before hitting the big time. Funnily enough, some of his earliest works featured references to Planet of the Apes, a film he actually remade in 2001. He certainly has come a far way from the boy who won a poster contest in high school.

After you have finished your trek through the exhibit, and perhaps strolled back to certain favourite pieces, feel free to head across the hall and into the Canteen. The in house restaurant, co-owned by master chefs Peter Oliver and Michael Bonacini, offers affordable and delicious fare. Anything from a full sit down meal to a sandwich on the go, or even just a granola bar is there for you to enjoy. I tried their smoked salmon sandwich and house blend of iced tea, both of which were satisfying and delicious.

I had an excellent time at the exhibit and, despite being a huge fan for years already, learned a lot of things I didn't know about one of my favourite filmmakers. It was a great way to spend an afternoon, and one that I have already recommended to friends and family.

If the Tim Burton exhibit sounds like something you're interested in, you had best hurry over as the display closes April 17, 2011! Luckily for you, TIFF Bell Lightbox has extended their hours to accommodate demand. The display is open Monday noon to 6PM and Tuesday through Saturday from 10AM-10PM. For the shortest wait in line possible, order tickets online and have them ready when you arrive. Tickets cost about $20 each.