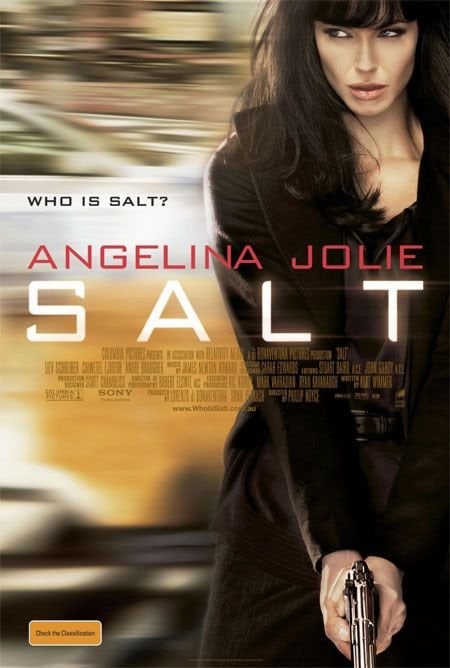 I recently watched Angelina Jolie's new movie and must say it was definitely ACTION packed. Although I was quite tired when I put the movie on it definitely kept me up and wanting to watch more.
First thing I did notice as beautiful as Angelina is I do not love her as a blonde.

Angelina plays the character Evelyn Salt who is a CIA agent. The movie starts out with her being tortured for information with her of course denying that she "is not a spy", you hear that line alot in the movie. The CIA does not come to her defense because that would blow their cover. So her husband and night and shining armor comes to her aid and petitions to have her released.

The movie then switches to life back to normal with her working away at her desk trying to get out of the office early to go home and celebrate her anniversary with her hubby. In walks a Russian spy that is being held for questioning and Angelina is assigned to the case with only 10 minutes to spare. The spy reveals that she is a Russian spy and will be assassinated the President of Russia when he comes to town. He escapes and so does Evelyn. Evelyn goes on the run again stating that she "is not a spy" but manages to kill a ton of people and hurdle from truck to truck while going about 160 on the highway.

We then find out that as a child her parents were killed and she was raised by the very same spy that was in for questioning. To return the favour for her loving husband rescuing her she then watches and lets the "godfather" who raised her kill him! I guess that is what they mean by till death do us part! She must of course prove to him that she has no emotion and could not care if her husband is killed right in front of her?