Let's start this out on a positive note. Captain America: The Winter Soldier (directed by brothers Anthony and Joe Russo) features a likeable protagonist, comfortable pacing, and some rather good plot ideas.

Tying in to the growing Marvel cinematic universe, The Winter Soldier takes place soon after the events of The Avengers film (for a full grasp of the setting and characters, we're supposed to have also seen Captain America: The First Avenger).

WW2 hero Steve Rogers (Captain America, played by Chris Evans) is still trying to adapt to life in the 21st century — which, in his case, entails working for a well-intentioned but overbearing intelligence organization headed by the sensibly paranoid Nicholas Fury (Samuel L. Jackson).

On paper, at least, there's a great deal of dramatic potential in the idea of the honest, quietly gallant but somewhat old-fashioned soldier of the 1940s trying to work alongside a former KGB assassin (Scarlett Johansson) who lies for a living, under the command of a leader who trusts no one. Add to this some dubious anti-terrorism tactics and blurred lines between security and oppression and you have the recipe for an exciting and morally rich story. 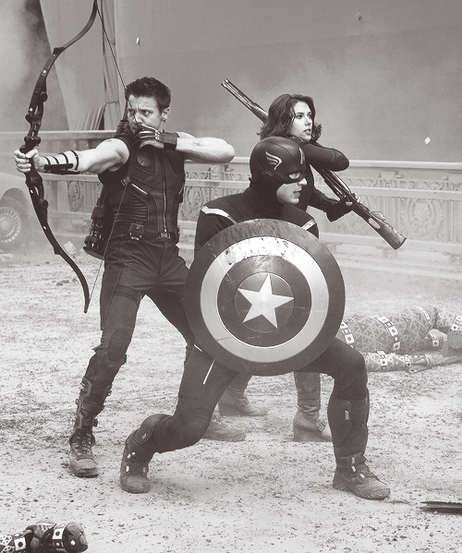 All that's on paper. On the screen, what we get is a decent set-up, a couple of distinctive — though mostly unexplored — characters, a juicy ethical conundrum that vanishes unresolved in a puff of smoke (or rather, a series of explosions), and an overdose of acrobatics and flying bullets.

Let's be fair here. Dynamic, over-the top fight scenes are one of the perks of comic book movies, and this one does indeed deliver a few entertaining dustups. It also contains quite a few that overstay their welcome and wear out the old Hollywood tradition of ineffectual antagonist gunfire.

While it's true that too short a confrontation at the very end of a film can feel anticlimactic, it's also manifestly true (even in the world of comic book fights) that less is often more. A shorter fight can actually pack more of an emotional punch instead of leaving the audience numb and wondering why everyone isn't dead yet.

Speaking of everyone being dead, there's also the small problem of collateral damage to be dealt with here. One of the charms of the Captain America character (as set out in the previous movies, anyway) is his sincere, instinctive decency and compassion. Here, there's not even a second of anguish or even acknowledgement of civilian damage caused by his exploits and those of his enemies.

Having said all this, many of The Winter Soldier's flaws would be much diminished if only the movie were shorter and better scored. The Russos could have knocked nearly half an hour off the movie's two-hour-plus runtime without losing any of the plot, humour, or characters depth simply by slimming a few obese action sequences. What remains would then benefit a great deal from a more distinctive and evocative soundtrack. Alan Silvestri's work on the first Captain America movie was both memorable and very fitting for both the historical period and the hero. Henry Jackman's score for The Winter Soldier is utterly bland and modern, so it fails to evoke a protagonist who is, despite everyone's efforts, neither of the above.