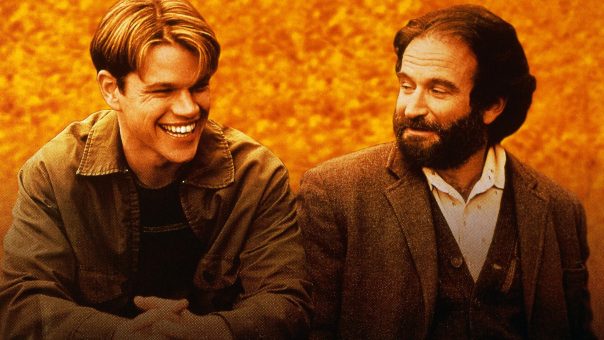 Good Will Hunting (1997- Gus Van Sant) takes place in Boston, but a few significant bits of it were actually filmed in Toronto, thus earning it a spot on my Toronto Movie List. So, here we go.

Good Will Hunting was the movie that really put Ben Affleck and Matt Damon on the map (sadly, that map led Mr. Affleck to Daredevil, but these things happen to the best of us). They not only starred in this thing – they actually wrote the script, and hawked it around Hollywood in search of a studio and a director willing and able to do it justice. When Good Will Hunting went on to win 2 Academy Awards, one of them was for the screenplay – as was the Golden Globe Award it also picked up (having been nominated for a total of nine Academy awards, and four Golden Globes).

In other words, this thing was a bit of a big deal when it came out.

Good Will Hunting covers a few weeks (or perhaps months, it's not clear) in the life of Will Hunting (Damon), a rough-and-tumble young janitor whose hobbies include hanging about with his loser friends, tussling with police, and utterly embarrassing Harvard students with his incredible memory and intellect. Will is particularly brilliant at math, which is how he comes to the attention of MIT Professor Gerald Lambeau (Stellan Skarsgård), who pulls him out of prison on the condition that he attend regular psychiatric sessions until he's 21. The only therapist able to get any traction with Will is Dr. Sean Maguire (a very restrained Robin Williams), who starts to bond with the down-and-out young genius just as he meets the cheerful and disarming Skylar(Minnie Driver).

This is what I'd call a 'feel-good' movie (and I do consider that a pejorative term), but done with enough creativity, humour, and skill to make it widely appealing. While you know after the first twenty minutes or so the rough direction the plot's going to take, the way it gets there is pleasantly nuanced and restrained in places. A lesser film might have made Will's friends out to be unsympathetic thugs, but instead they're actually entertaining, mostly well-meaning (especially where Will is concerned), and oddly likeable, despite their crudity and self-destructive tendencies. In fact, every character of importance that we actually meet on screen is basically well-meaning. There are no antagonists, no rivals for Will or Maguire to vanquish – just the emotional scars left by Will's unseen, abusive foster father, who is out of the picture by the time the film takes place.

Enough positivity. Time for complaints. I'm no expert, but my suspicion is that this movie does not depict therapy sessions in a very realistic manner – one of the climactic 'breakthrough' scenes in particular is not only hard to believe, but also rather sudden and anticlimactic.

I'm not going to say I loved this movie, or even really liked it (we're up to two hands now, and maybe a foot). It's just not my sort of movie. But it's got a lot of nice details, a fair bit of low-key, incidental humour, and some quite decent acting.

Now for the filming locations..

Due to its age (about 18 years), Good Will Hunting presents a bit of a challenge when it comes to tracking down exact Toronto locations. A lot has changed, and not all of it was easily recognizable to begin with. Allegedly, Bloor street's Crown Life Building, the Central Tech high school on Bathurst, Front street's Upfront Bar & Grill, and the Ontario Speciality Co. shop on Church st. were all used in the film, but those last two are no longer in business. Several spots around the University of Toronto were also involved, including Knox College, the Faculty Club, Victoria College, and St. Michael's College.

Two bits of faux-Boston that I did manage to find were the McLennan Physical Laboratories and Whitney Hall – both parts of the University of Toronto's St. George campus.

Built in 1967, McLennan labs is a large, imposing (although nowhere near medieval looking, it does have its own tower) place squatting on the intersection of Russell street and St. George. It's named after Sir John McLennan, a noted Ontario physicist and U of T alumnus. 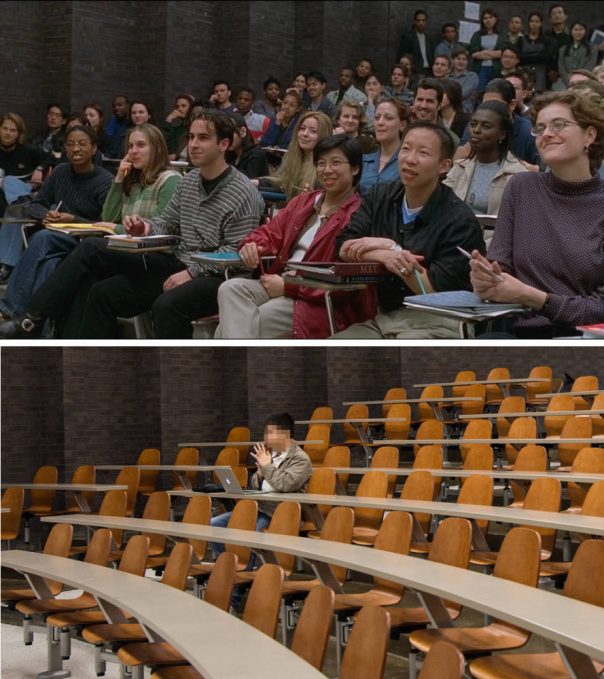 A lecture hall somewhere in the McLennan Physical Laboratories

The older, friendlier looking Whitney Hall a few blocks north of Hoskins and St. George is a student residence connected to University College. Originally a women-only building, it went up in 1931, with funds bequeathed to the university by E.C. Whitney–the business-minded brother of former Ontario premier Sir James Whitney. 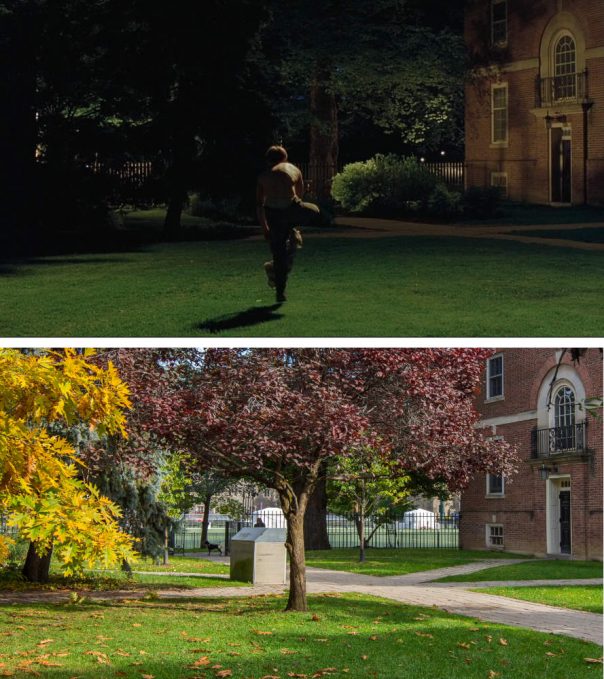 Just Matt Damon putting his pants on in the Whitney Hall quad, move along

The exterior of Whitney Hall was used in Good Will Hunting as the apartment of Will's Harvard girlfriend Skylar. The interior scenes were filmed at the nearby Wycliffe College, where I suspect the exact rooms would be quite difficult to find, even if I were allowed to look for them.

I'm fairly certain I found the Whitney Hall doorstep that Will lurks outside of about a third of the way through the movie. It's in the back–off the courtyard. There's a door in each corner, but the North-West one looks the most likely. 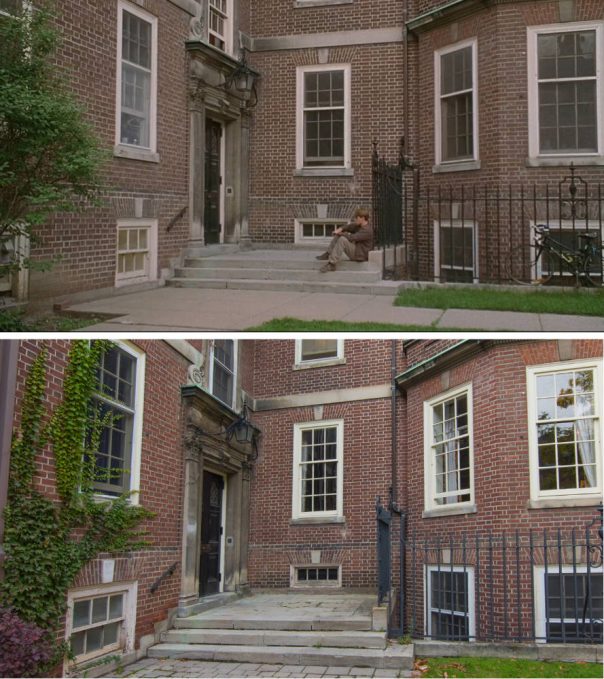 One of Whitney Hall's quadrangle doors 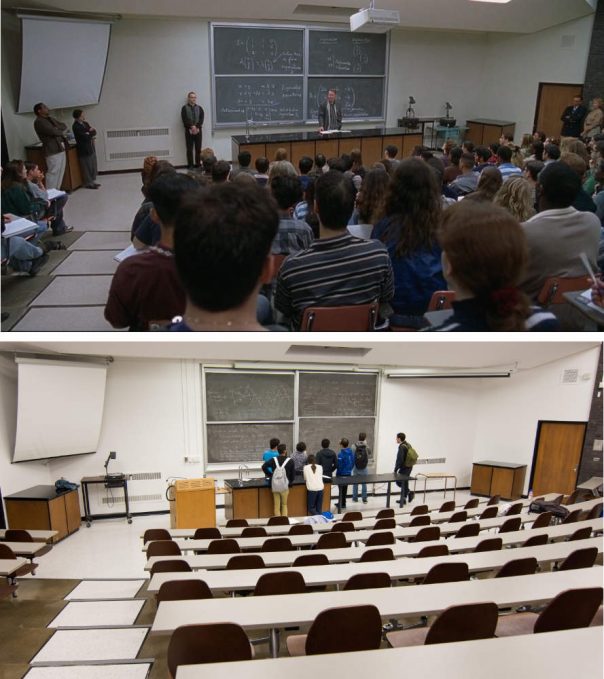 Sadly, I can't be this precise when it comes to locating Prof. Lambeau's MIT lecture hall, which was supposedly filmed somewhere in the McLennan labs building. The passage of time (and several locked doors) seriously hampered my exploration, but I think it might have been the fourth one down the right-hand hall if you enter from Huron street.

Leave a Reply to A Tomarin Cancel reply