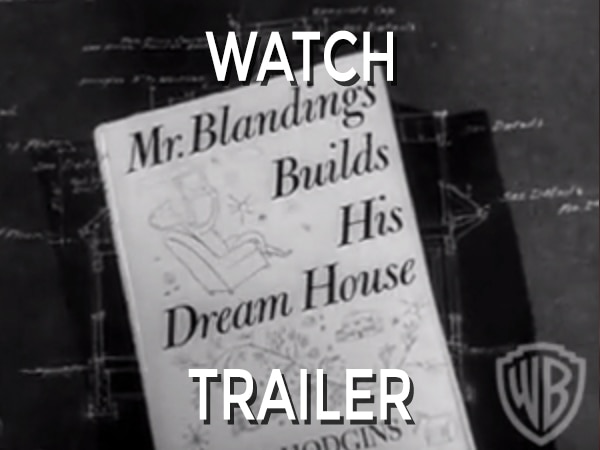 MR. BLANDINGS BUILDS HIS DREAM HOUSE is the kind of film that makes you want to ditch your noisy urban dwelling in favour of a serene spot in the country faster than you can blink an eye. Released in the summer of 1948 by RKO Radio Pictures, the film stars beloved classic film actors Cary Grant, Myrna Loy, and Melvyn Douglas.

Jim Blandings (Grant) and his wife Muriel (Loy) have lived in their four-room Manhattan apartment for the better part of fifteen years. During that time they have had two daughters and hired one maid making for a very tight squeeze. Like most Manhattan apartments, there isn't a great deal of space and the strain of living amongst erupting closets and a constantly occupied bathroom is putting a damper on things. Oh, and before I forget, there is also a pet bird and a close family friend – lawyer William "Bill" Cole (Douglas) – that have become permanent fixtures in the Blandings home. 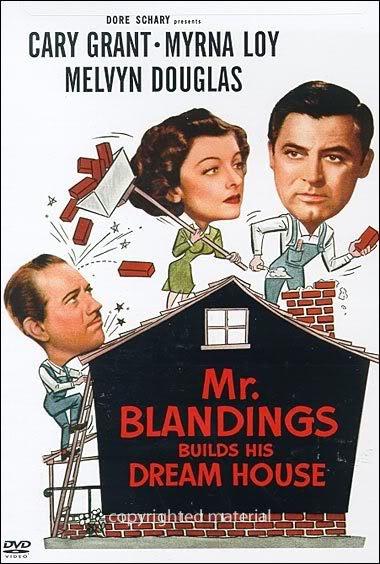 Jim Blandings is an ambitious advertising executive whose creative ideas have started to suffer due to his frenzied and inhibiting living conditions. One day, whilst reading the newspaper, he comes across a property listing that makes him sit up and take notice. There is a home for sale in rural Connecticut that promises great views, acres of land, serene surroundings and plenty of space to raise a family in. In other words, it is precisely what Jim and Muriel Blandings are looking for! The Blandings arrange to see the house and when they eventually come face to face with it they are forced to make a particularly difficult and very expensive decision: do they tear the existing dilapidated structure down and start from scratch, commissioning an architect to build their dream home for them? Or do they move into the current house and settle for a renovation?

Real estate agent Smith (Ian Wolfe) has been trying to sell "the Old Hackett Place" for years and when the Blandings show interest in the property, Smith's eyes light up - seriously, you can almost see the sparks shooting out of them. The home is a two hundred year old farmhouse and looks it's age; it's falling apart and leaning dangerously to the left, ready to keel over as quickly as a Victorian woman wearing a corset. Eager to make the sale, agent Smith encourages Jim to buy the property (for more than market value, naturally) and turn it into his and his wife's dream home. It's what they've always wanted, isn't it? Why not take the plunge? 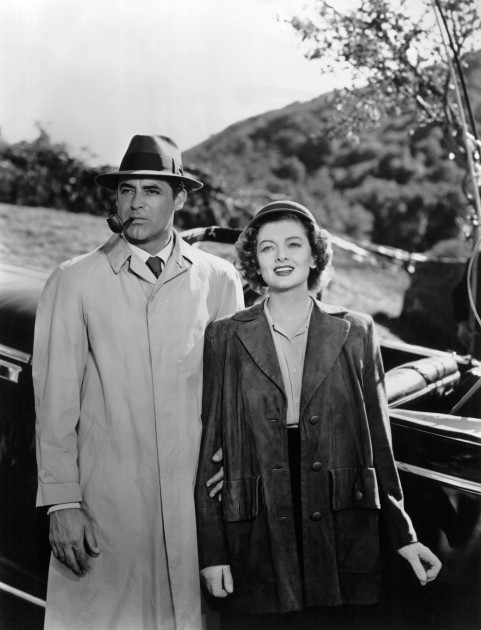 Since the existing structure is pretty much falling apart and not worth saving, the Blandings finally decide to purchase the property, tear down the house, and build their dream home (hence the title of the movie). Throughout the negotiations and decision-making process, the Blandings have Bill Cole breathing down their necks, advising and cautioning them about the hindrances and difficulties of undertaking such a massive project. It takes a lot of convincing and a lot of construction-related hiccups that eventually make Jim and Muriel second-guess their real estate purchase; Jim only makes $15,000 a year and the costs of tearing down a house and re-building it from the ground up is taking its toll on his earnings. We all know what comes next, don't we? Jim and Muriel's marriage starts to suffer and they find themselves second-guessing each other at every turn. Jim thinks Muriel is having an affair with Bill Cole and Muriel thinks Jim is overreacting and being unreasonably selfish.

The struggle to maintain a home, a marriage, and a family all at the same time wasn't only relevant in 1948 when MR. BLANDINGS BUILDS HIS DREAM HOUSE was released. In fact, it's a very real struggle today as well considering how expensive it is to buy a home, decorate and furnish it. We have often heard it mentioned before that amongst young people in particular, it's much easier and more practical to rent a property than it is to actually buy one. In major cities throughout the world including places like Toronto, Rome, and London it's practically unheard of for young people to purchase their own homes! The vast majority of them prefer to rent on a month-to-month basis because even a small one-bedroom apartment is priced at a staggering $800,000 and up. 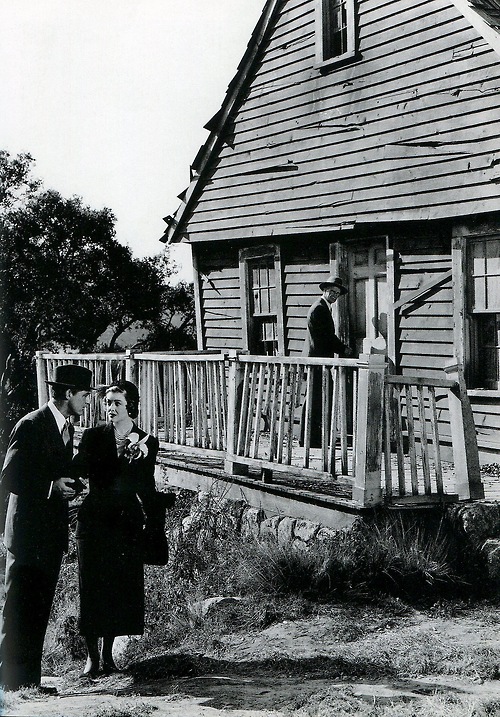 Though things start to look bleak for the Blandings, they pull through and their marriage remains intact. I wish the same could be said for their new home! First the property gets flooded when a well is dug, then the pouring of the foundations is delayed, doors that were supposed to have locked from the inside end up locking from the outside (and chaos ensues), the previous owner demands the repayment of his mortgage since the Blandings unceremoniously tore down his home without first seeking his permission, and when the family finally manages to move in, the house is missing half of its windows. I know what many of you must be thinking: this sounds awfully familiar. Well, that's probably because THE MONEY PIT (1986) starring Tom Hanks and Shelley Long served as a sort of loosely based remake of this classic film and went on to gross almost $55 million at the box office.

Things eventually settle down for the Blandings and they end up getting their dream home by the film's final reel. All is well: there are spacious closets in every room, more than enough bathrooms for everybody, an enormous living room featuring a lovely wood burning fireplace, a sewing room for Muriel, and room for the maid. Like many other classic movies of the period, MR. BLANDINGS BUILDS HIS DREAM HOUSE ends in smiles and laughter.

Though there were plenty of entertaining moments in the film, I thought it could have done with a bit more comedy. Cary Grant was an actor with incredible comedic timing and in this film his performance seems a little bland. The same goes for Myrna Loy who achieved worldwide fame starring alongside William Powell in THE THIN MAN movies of the 1930s and '40s; Loy plays the part of a dutiful wife in this film beautifully but she does very little else. Sure, she's absolutely charming when she needs to be, but again, I feel as if her performance falls flat. I definitely don't think that either star was used to his or her full potential here whether the script is to blame or the film's director, H. C. Potter.

Having said all that, though, MR. BLANDINGS BUILDS HIS DREAM HOUSE is worth seeing. It's a light-hearted look at the perils and trials that come along with purchasing property and designing your own home. Perhaps the youth and young families of today would do well in watching a film like this one, especially considering the state of today's real estate market. It may serve as a warning and it may serve as a gentle push towards home ownership – who can tell? 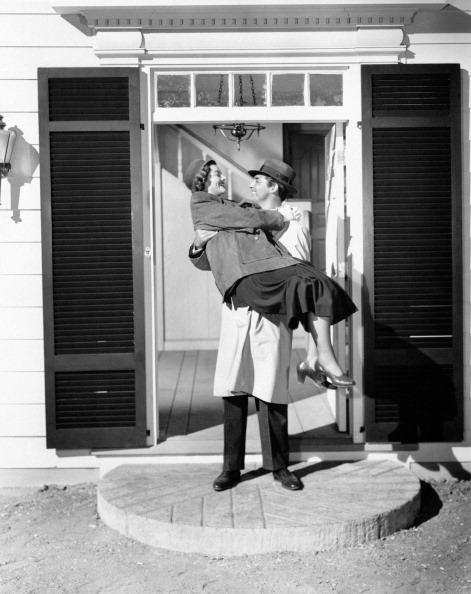 Each one of us probably has a vivid vision of his dream house: a place where we could find peace after a long day, a place that we would be happy to call home. Even when you think you found something that appears to be "it", whether it's a large mansion, spacious condo, or a small house with a yard, do not let this affect your judgement of the situation.

There are many things to be considered before buying real estate and making any rush decisions while your head is in the clouds is something that might not have such a happy ending as this movie suggests. The plot is a good example of rushing into something, without thinking it through: Mr. Blanding is so charmed by the property, that he buys it only to discover that the house is in such poor shape that it has to be torn down. How much money would he save if he took some time and hired an expert to take a look on the structure of the house? He even might have backed off from the deal and look for an empty lot to build a completely new house, so he wouldn't have to pay for tearing down the old house in the first place!

The lesson to be learned from Mr. Blandings Builds His Dream House is clear. The movie wants to make you believe that letting your heart decide instead of your head can be a good thing. Well, when you're about to buy real estate, it's definitely not.