NEIGHBORS is every homeowner’s nightmare come true in the form of an American comedy film. Whether you chose to rent or purchase your home, we have all experienced a form of the ‘bad neighbour’ type who lives next door. While the film Neighbors takes this experience to the extreme, the audience is given a unique view into the lives of both neighbours and showcases both sides of the story where the grass isn’t always greener on the other side.

Mac (Seth Rogen) and Kelly Radner (Rose Byrne) are a newly married couple who have just moved into a new suburban home with their newborn daughter, Stella. They quickly come to realize that the responsibilities of parenthood make it very difficult for them to maintain their old lifestyle and desires of being young again. One day, the couple finds out that Delta Psi Beta, a fraternity known for their outrageous parties, has moved into the home next door. As you can imagine, this turn of events spirals the movie out of control as two polar opposites who can’t seem to get along are now living next door to each other. 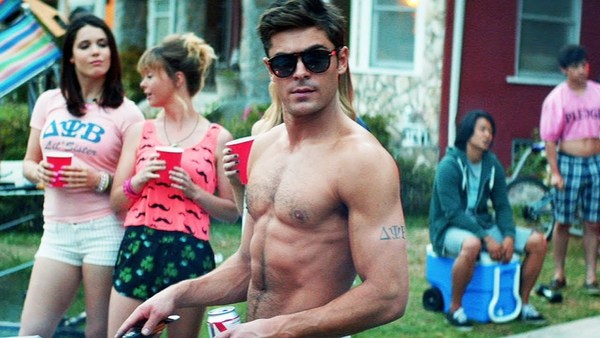 Day-drinking, not fun to have in the neighbourhood

This movie plot, while taken to the extreme in some cases, is not totally unlike similar situations homeowners face in everyday life when either moving into a new house or a new neighbour moves in. It’s important to get to know your new neighbours, politely introduce yourself and showcase who you are. When Mac and Kelly are faced with the issue of a fraternity house moving in next door, they decide to greet their neighbours by dressing up and pretending to act like young adults who seem to be very laidback and relatable to the college students who live there.

The couple feels that if they are able to present a certain image to these college students, that this will convince them to be quieter and not party so loud. However, this attitude backfires on them. By having this attitude, they did not present themselves as the neighbours they really are: adults and not college students. From the college student perspective, it would be hard to take the couple seriously and ultimately respect their opinions.

Mac and Kelly make further mistakes as the movie progresses by accepting an invitation to a party at the fraternity house, where they continue acting like young adults by engaging in drinking and drug-related activities with college students. At the end of the night, Teddy (Zac Efron), the president of Delta Psi Beta, makes the couple promise to come to him first if the frat house is making too much noise, instead of calling the police. At this point, the couple has not only given into their weakness and desire to try and be young again, but they have also exposed this weakness to Teddy to use to his advantage, which is seen in later scenes of the film. As a couple who wanted to stop the partying and ‘put their foot down’, they became weak and in fact encouraged their neighbours’ bad behaviour by joining in on their parties and promising not to call the police on them in the future.

However, this promise ends up being broken the next night when Kelly and Mac call the police after failing to get in touch with Teddy to ask him to keep the party down. Unfortunately, the police identify the couple to Teddy as the neighbours who reported their party. Betrayed by their trust, Teddy provides video evidence that shows Mac partying at the frat house, which convinces the police officer not to take the couple’s complaint seriously. Angered by their broken promise, the couple awakes the next morning to find Teddy and the rest of Delta Psi Beta trashing the outside of the couple’s home. This whole situation could have been avoided if Mac and Kelly had just originally called the police or even just walked over next door to personally speak to Teddy about the noise. Additionally, the couple now has to deal with an angry neighbour who feels betrayed and is now out for revenge.

As suspected, the audience learns that this neighbourhood happens to reside near the local college. This is one of the most obvious and hardest real estate lessons portrayed in the film – never move into a house that is located near a college or university. After sitting down with a realtor, Mac and Kelly are disappointed to learn that no one is willing to purchase their house due to the fact that it is next door to a frat house. However, they quickly learn that the college itself may be interested in buying the house, but only at half of its value. Kelly and Mac are forced to stay where they are as they are not willing to lose over half of their investment. If you are desperate to sell your home and are in the same situation, keep in mind that you might have to accept a lower price and ‘cut your losses’ in order to move out and find a new home.

Listen to the experts before you make a stupid decision

Having to accept their current situation by not moving out of their home, Mac and Kelly do everything in their power to force out the fraternity on their own terms by analyzing and figuring out their weaknesses. This includes everything from flooding the frat house’s basement to damaging their property to spying on them. While this is just a film, causing damage in real life to your neighbours home and property while also spying on them is against the law and could lead to criminal charges, putting you in a situation where you are worse off. In Neighbours, Teddy and Delta Psi Beta are always able to get themselves out of each revenge situation, leading to a never-ending circle of revenge plots, with each neighbour trying to top the other throughout the movie and towards the end of the film.

You don't want to be cleaning up your neighbour's mess every morning.

Eventually, Mac and Kelly end up victorious in the end and the frat house is dismantled. While the film ends on a happy note, this is not always the case in the real world. Sometimes we have neighbours that are just here to stay and who we need to continue to live next door to. The most important and realistic lesson to take from this film is to ultimately treat others how you would like to be treated, which includes being polite and respectful to your neighbours, no matter what side of the grass you are on.