In his classic book 1984, George Orwell said "There was truth and there was untruth, and if you clung to the truth even against the whole world you were not mad." This seems especially prescient after watching Adam McKay’s The Big Short, about the financial crisis of 2007-2008. McKay manages to take a difficult concept and boil it down into language that is easy to understand and follow. The film provides many hard-earned lessons about the global financial system and the role real estate plays within it, and for anyone interested in the market there are some great insights to be gained. 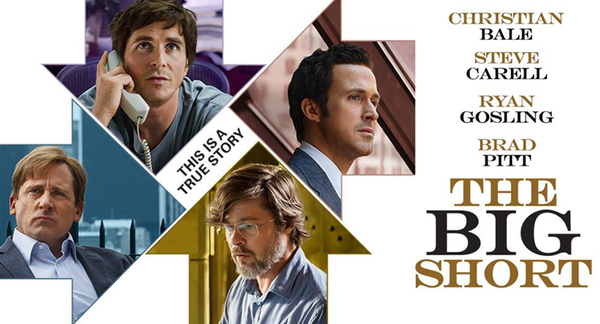 This is a true story.

Perhaps most remarkably was McKay’s ability to take an idea that many people likely consider boring and create the dramatic tension and pathos necessary to make the story as compelling as it is. This is in no small part thanks to the fine acting by the ensemble cast. As you watch the small and disparate group of financial contrarians push back against the entrenched belief in the stability of the U.S. housing market, it can become hard to believe that so few people saw the financial collapse coming. But as McKay and co. so masterfully show us, that’s exactly what happened.

Christian Bale’s Michael Burry is masterfully depicted as the iconoclast visionary who seems to find profit out of thin air. After discovering the unstable nature of the U.S. housing market he goes about setting up a mechanism with which to profit from the eventual collapse. Through a series of wrong numbers and conveniently placed research papers, more and more people become aware of the credit default swaps (the aforementioned mechanism for shorting the market) and set out to make money by betting against the system. Ryan Gosling’s Jared Vennett is superb as the "bro" of Wall Street, who pulls in Steve Carell's rag tag group of investors. Carell's nuanced and pained portrayal of Mark Baum is my personal favourite in the movie, as the character gives the audience someone to take the ride with. 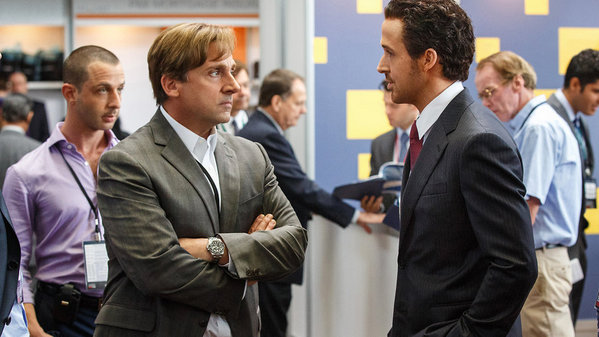 Ryan Gosling as the "bro" of Wall Street

The terminology and "inside-baseball" language so ingrained in global finance could pose a problem for audiences, but the filmmakers masterfully sidestep the issue with some hilarious celebrity cameos to explain the complex issues. Margot Robbie in a bubblebath explains subprime loans; celebrity chef and generally badass dude Anthony Bourdain breaks down CDOs (collateralized debt obligations) with a vivid fish metaphor; and Selena Gomez teams up with renowned economist Dr. Richard Thaler to illustrate just how a synthetic CDO works. 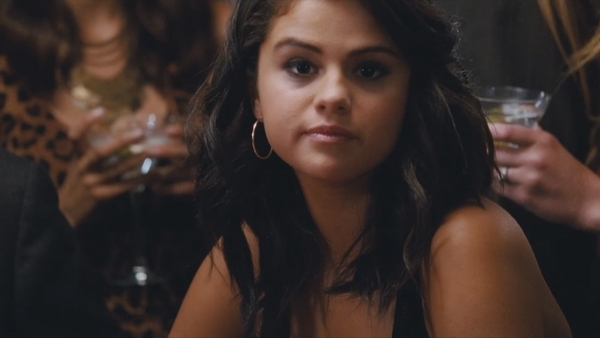 Selena Gomez explains how a a synthetic CDO works.

The film’s stars also frequently break the fourth wall to make sure the audience is up to speed. In a different film this technique could completely take the audience out of the reality, but here the knowing wink feels more like a buddy sitting next to you in the theatre explaining the joke you didn’t get. 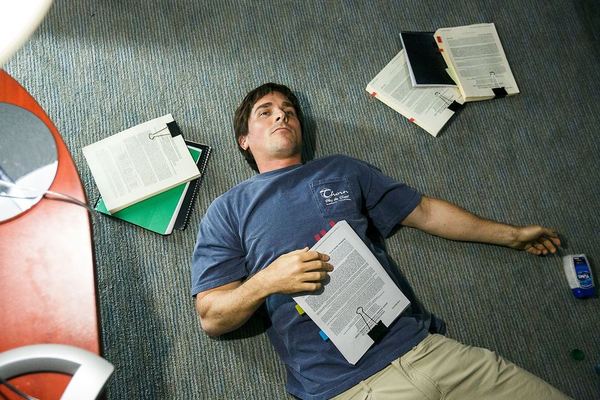 Most people who are trying to understand mortgages can relate to this picture.

So what lessons are there to be gleaned from this film? For anyone interested in the real estate market there are a number of lessons. Some of them are big and scary enough to keep the more sensitive audiences members awake at night, while other lessons are more applicable to the average home buyer. So let’s take a look at a few.

This issue is best depicted in the film when two of Carell’s associates travel to Florida to check on the stability of the mortgages making up the subprime loans that threaten the housing market. While it’s not practical for most people to travel across the country to look into the finer details of a deal, it’s always a good idea to do any extra research you can. If you’re buying a property make sure you check it out thoroughly. Get a home inspection. Bring a friend along for a second opinion. Just get as much information as possible.

As Carell and his buddies question two Florida mortgage brokers (played by Billy Magnussen and New Girl’s Max Greenfield), it becomes evident that many of the people who sign these mortgages don’t actually know what they’re getting themselves into. This is of no consequence to the two brokers who have been pushing something called NINJA loans on their clients [No Income, No Job, No Assets]. However it leads to disastrous results not just for the homeowners, but for the entire economy as well. The moral here is that you need to know exactly what you’re signing at all times, so read the fine print of any contract.

Multiple Loans On a Property Is Probably a Bad Idea

"Okay, look, if home prices don’t go up you aren’t going to be able to refinance. And you’re going to be stuck paying whatever your monthly rate is after your teaser rate expires. Your monthlies could go up two to three hundred per cent."

So whenever you take out a loan on your property make sure you consult a qualified mortgage broker.

Sometimes the Grapevine is Right

As Michael Burry’s discovery is uncovered by Gosling’s Vennett, and then Carell’s Baum, and then John Magaro’s Charlie Geller and Finn Wittrock’s Jamie Shipley, it becomes more and more evident that the system has been corrupted. The power of the grapevine made a very small number of people very rich, while others refused to listen. So check out the area you’re thinking about buying in and talk to the neighbours. You can learn a lot about a property or its surrounding neighbourhood by listening to the grapevine.

Sometimes the Experts Are Wrong

The conventional wisdom leading into the 2007-2008 financial crisis was that the United States’ housing market was one of the most stable investments in the world. But as the real-life Michael Burry proved, the conventional wisdom isn’t always right. Through conflicts of interest, apathy, disinterest and a lack of proper oversight the housing market was enough to bring the world to the biggest financial crisis since the Great Depression. On a smaller scale, this issue is important for anyone thinking about getting into the real estate market. Buying property is one of the biggest investments a person can make, and it behooves them to do their due diligence. But even when one does all the necessary research, you have to remember that the experts can still be wrong. A few people were able to see the collapse coming and profit from it, but even when they began trying to sound the alarm the old guard refused to listen. They held on to truth against the whole world and were proven to be not mad.

The Big Short has won the Academy Award for Best Writing, Adapted Screenplay, has four nominations in other categories, and has been hailed by critics. This is no small feat for a film that takes such a complex issue and turns it into a piece of art that not only entertains—it teaches as well.