What a wonderful summer it's been, despite the cool weather! Travel-wise, Tuscany was all that we could have hoped for and more. We did a side trip to Cinque Terre, a remote set of five beach towns that is a must-see.

As far as domestic travels go, we love the simple life spending weekends at our cottage in Haliburton Highlands. Bella loves the cottage, but she does tend to get a bit sea-sick!

On the other side of travelling, my mom Brenda (and old business partner) is visiting me from Vancouver for a week. We hope to spend lots of time together!

Nicole, my client care coordinator, went to Alabama to visit her relatives, and despite a bit of Deep South culture shock, found it to be a beautiful place full of friendly people.

In other news, we upgraded our computer equipment in August so that we can continue to serve you better (and faster!) The new-to-us machines are great.

Kudos to all of you (you know who you are!) who are giving of your time, energy and spirit to coordinate and participate in charity events. So many of my dear friends and clients have let me know about their volunteer work on such events as the Canadian Paraplegic Association's Wheelchair Relay Race, the Weekend to End Breast Cancer, the CIBC Run for the Cure, the Ride for Karen, Chicks With Sticks, Camp Quality & Camp Ooch, the John Koshan Memorial Golf Tournament, On The Move, Pathways to Education and many, many more. The often thankless effort of collecting pledges, promoting the event, training, preparation, and administration, produces concrete results in the form of the money and awareness you raise for these excellent causes. These contributions are essential to the work of charities and foundations which help make the world a better place. Thank you!

Prices declined marginally in July, falling one per cent to $312,418 from the $316,510 recorded in June, according to TREB President Ron Abraham. "A continued high level of inventory (22,368 active listings, unchanged from June) has contained price pressures," Mr. Abraham said. "This is welcome news for buyers." He went on to note that prices were up eight per cent over July of 2003. To put it in historical perspective, the total of 46,398 sales in the first six months of this year at an average price of $314,661 compares with 44,237 for the whole of 1994 when the average price was $208,921.

Royal LePage, which bases its figures on estimates from its real estate agents in selected neighbourhoods, reports that the greatest appreciation in value occurred in midtown Toronto, where the average luxury residence fetched $1.22-million in the quarter from April to June of this year, up 28.4 per cent from a year earlier. Coming in second was Cabbagetown, which saw a 23.8-per-cent rise to $520,000 for a typical two-storey property.

Season two of "Buy Me" is gearing up for production in Toronto, and they have again approached me to participate! The show, which originally aired on HGTV and now can be seen on the Life Network Sundays at 10:30 a.m., focuses on the selling process of an individual home from renovations to prospective buyers. If you are selling your home & aren't camera-shy, let me know!

Jennifer Grant
has accepted a new job as Field Marketing Manager at Bally Total Fitness and Sports Clubs of Canada - she starts on September 7!
Dave Ullrich
has begun a download-only online record label called Zunior, which is artist-friendly and great for indies. To download great music at great prices, check out www.zunior.com.

Statistically, more babies are born in July & August than in any other months of the year. This definitely seems to be true in my world.

Give a Small Room Big Appeal

from The Toronto Star

How is it possible to delineate an open-concept living/dining area so that each room serves its function privately, elegantly, and separately, without putting up a wall? Small-space living often requires some compromises in decorating, color, and lighting.

If your ship doesn't come in, swim out to it.

See a For Sale Sign/Sold you were wondering about? We are happy to let you know about houses in your neighbourhood - feel free to contact Nicole directly at:

A continuing column of
our recent sales 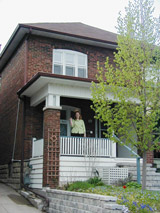 Get information on any property for sale/sold. Call me at 416 762 5949 for the information you want – and I'll track it down, Hassle Free!

While buying a first home used to be the traditional ritual of the newly married couple, Royal LePage says there is a significant increase in the number of single women making house purchases on their own.

According to a poll released on August 31, 2004, women outpace men as first-time homebuyers by 51% to 49%. However the gap is set to widen as 55% of women said they would ‘potentially purchase their first property in the next three years' compared with 45% of men.

Indeed, the women polled were so focused on home-buying that 30% said they would ‘very likely' give up their wedding reception in order to put a down payment on a home, while only 15% of men were willing to do so.

The trend is attributed to better education and income for women, coupled with different attitudes towards finance and living alone.